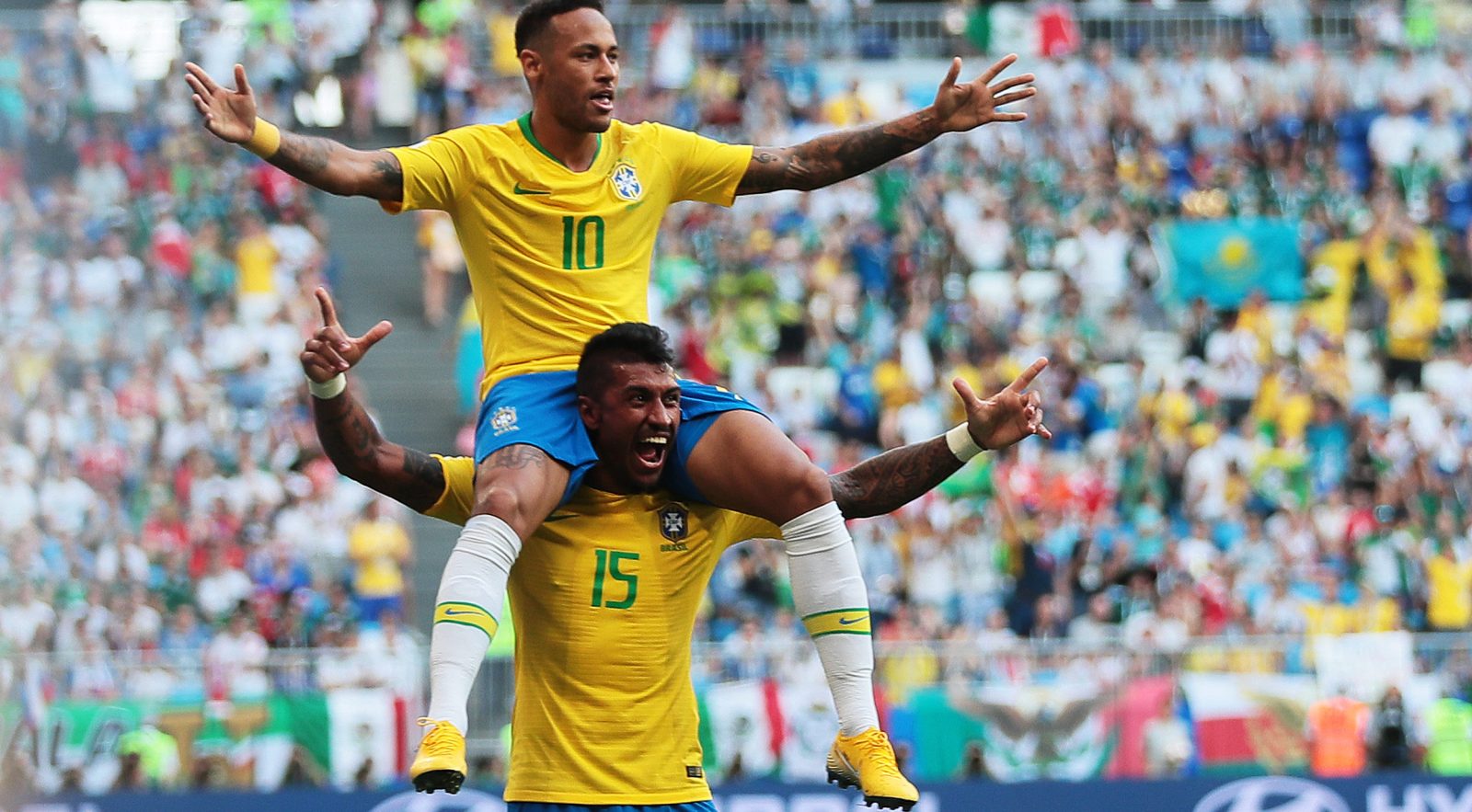 Neymar (top) of Brazil celebrates with teammate Paulinho after scoring the 1-0 during the FIFA World Cup 2018 round of 16 soccer match between Brazil and Mexico in Samara, Russia, 02 July 2018. EPA-EFE/WALLACE WOON

Pre-tournament favourites Brazil face off against bags-of-fun Belgium in Kazan. Both teams are on impressive unbeaten runs and the only thing we can predict is that it's about to end for one of them.

Five-time world champions Brazil have a chance to edge one step closer to their sixth title. Belgium have never made it to the final of the tournament, but they have impressed in Russia.

Before things kicked off, few would have predicted that the Red Devils would be the team with the most goals at this stage, but it’s been a tournament of contradictions and the team known for their Samba style haven’t quite found their rhythm yet.

Brazil also haven’t yet been tested under real pressure. Like Belgium, they are unbeaten heading into the clash but in the one group game where they went a goal down, to Switzerland, they couldn’t find a way back.

Belgium, meanwhile, engineered an astonishing comeback against Japan in the last 16. There was an element of fluke in Jan Vertonghen’s goal as they came from two goals down to win 3-2 at the death, but don’t underestimate the confidence boost that comes with such scrappy wins.

This group of Belgians have been dubbed the next “golden generation” while Brazil’s stocks seem permanently golden, and not just because of the colour of their kit.

The Samba Boys will start the match as favourites but will face their sternest test at the tournament.

Brazil were humiliated in their own tournament, thumped 7-1 by Germany in the semi-finals before losing to the Netherlands in the third-place play-off. Belgium exited in the quarters.

The Brazilians won the last of their five titles in 2002, but departed in the last eight in both 2010 and 2006 – competitions that Belgium failed to qualify for.

Brazil vs Belgium head-to-head and other stats

Brazil has lost just one match to Belgium: a friendly way back in 1963. They’ve won all three subsequent fixtures, including a 2-0 victory at the 2002 World Cup in the last 16.

Both sides are on impressive unbeaten runs. Brazil haven’t lost in 16 competitive games, compared to Belgium’s 22-match streak. The bad news for the Red Devils is that their last defeat came in the quarter-finals of a major tournament, bowing out to Wales at Euro 2016.

In another battle of scoring flurry vs defensive nuance, the two sides pair up nicely. Brazil have kept a clean sheet in 19 of the 25 games since Tite took over as coach, while Belgium have found the back of the net more often than any other side at the tournament.

Despite Brazil’s miserly return, Neymar has had 24 shots in Russia, more than anyone else.

For Brazil,  midfielder Casemiro is suspended and will be replaced by Fernandinho, as confirmed by coach Tite on Thursday. Marcelo is back to full fitness as is Douglas Costa.

Belgium’s only reported injury concern is Adnan Januzaj, but coach Roberto Martinez is hopeful that he will recover from his as yet unspecified ailment.