In Pictures: Belgium bounce back as brave Japan bow out

In Pictures: Belgium bounce back as brave Japan bow out 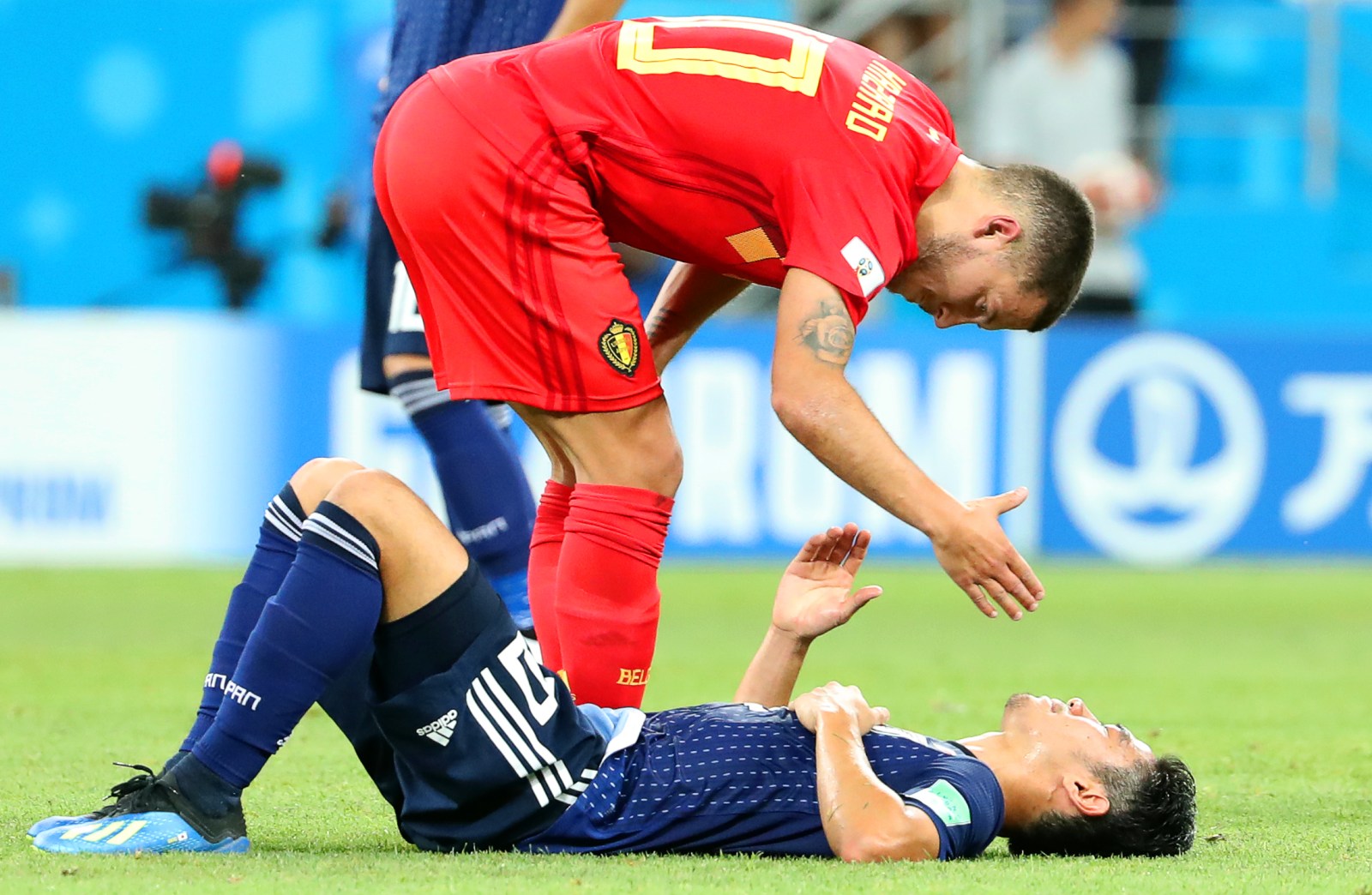 Eden Hazard (up) of Belgium and Shinji Kagawa (bottom) of Japan react after the FIFA World Cup 2018 round of 16 soccer match between Belgium and Japan in Rostov-On-Don, Russia, 02 July 2018. Belgium won 3-2. EPA-EFE/KHALED ELFIQI

Belgium scored a last-gasp winner to beat Japan on Monday and set up a World Cup quarter-final against Brazil.

Read our team-by-team guide for the last 16, including fixtures, kick off times and head-to-head stats.

Nacer Chadli scored a stunning injury-time winnner as Belgium fought back from 2-0 down to defeat Japan 3-2 and advance to a World Cup quarter-final showdown with Brazil here Monday.

Chadli’s superbly worked goal in the fourth minute of stoppage time was the final act of an epic last-16 battle that saw Belgium become the first team in 48 years to successfully overturn a 2-0 deficit in a World Cup knockout game.

Goals by Genki Haraguchi and Takashi Inui in four devastating minutes had put Japan 2-0 up early in the second half to leave Belgium reeling.

However, the Red Devils responded with quick goals of their own as Jan Vertonghen, at fault for Haraguchi’s goal, and Marouane Fellaini both scored headers before Chadli’s dramatic winner in Rostov.

“No negatives today, it was about getting through,” Martinez said. “It is a day to be very proud of these players.

“Keep believing in Belgium. In the World Cup you want to be perfect but it’s about getting through, it’s about winning.”

Having also exited the last 16 in both 2002 and 2010, Japan suffered knock-out stage heartbreak for the third time.

From the start, the Blue Samurai’s tactics were clear – harass and hurry their opponents every time they were on the ball, while living off scraps.

It almost paid off.

After a goalless first-half, the game exploded into life after the break.

Japan took the lead when they won possession deep in their own half.

The ball was moved downfield quickly and when Vertonghen failed to intercept the final pass, Haraguchi sprinted clear.

He placed his shot just past Thibaut Courtois’ despairing glove and inside the far post on 48 minutes to delight Japanese fans.

Falling behind rattled the Belgians as Hazard clattered the post moments later.

Japan doubled their lead on 52 minutes when Inui unleashed a thunderbolt shot off his right boot which flew past the despairing Courtois.

Desperate for a goal to get them back in the game, Lukaku headed wide with an hour approaching.

Confidence grew in the Japanese ranks with attacking midfielder Kagawa calling the shots.

With 25 minutes left, Martinez swapped Fellaini and Chadli for Dries Mertens and Yannick Carrasco, which sparked the Belgium response.

Vertonghen made amends for his mistake in the build-up to Japan’s opening goal when his speculative header from out wide looped over Eiji Kawashima’s grasp on 69 minutes.

Then Belgium drew level when Hazard’s pin-point ball found Fellaini in the middle and the Manchester United midfielder unleashed an unstoppable header on 74 minutes.

It was end-to-end stuff for the final quarter of an hour.

As his defence started to tire, goalkeeper Kawashima kept Japan in the game his side with two saves in quick succession to deny Chadli and Lukaku.

At the other end, Courtois saved Keisuke Honda’s wickedly curling free shot which led to the winning goal.

Lukaku, who was marked, left it for Chadli to tap home and cap Belgium’s stunning win right before the final whistle. DM