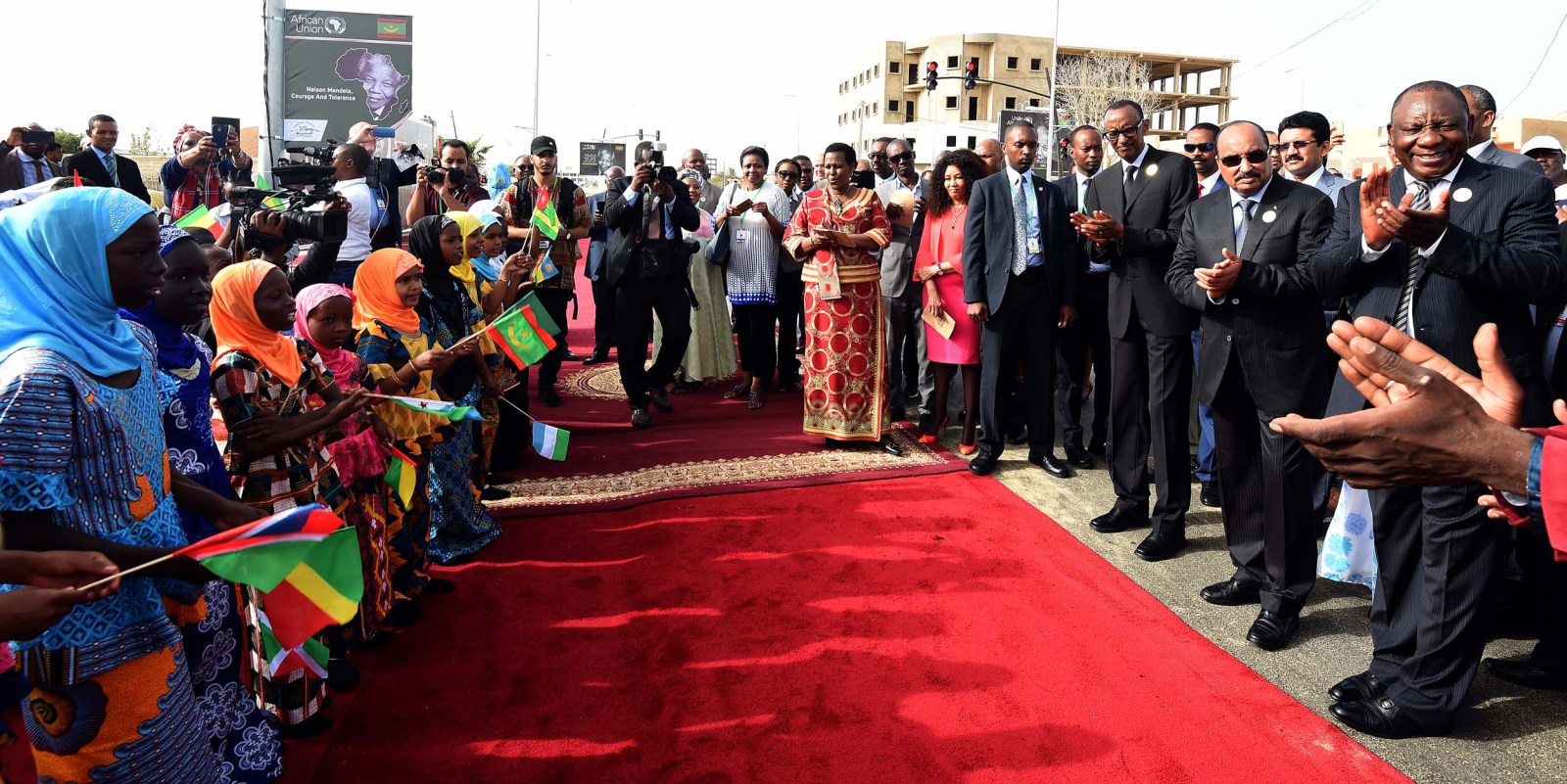 From July 2018, one of the major roads in Nouakchott, the desert capital of Mauritania, will bear the name of former president Nelson Mandela. The centenary of his birth is a timely reminder to the world of the values he fought for.

Even at 8am the mercury is pushing 30 degrees Celsius in the sandy streets of Nouakchott, which are still being resurfaced with fresh black tar, even on the last day of the 31stAfrican Union summit which had been in town.

Mauritania, population 4.5 million, is wide open country and desert, straddling north and sub-Saharan Africa. Pan-Africanists like Samia Nkrumah often bemoan the fact that a distinction is made between the two Africas at all. Mauritania is a beautiful cultural mixture of both.

On a large open space in front of a pretty foreign affairs building, on the corner with Moktar Ould Daddah Avenue, is an open marquee with the sand and soil and paving covered completely in large red rugs. There’s a massive billboard of former SA presaident Nelson Mandela and a curtained plaque in Arabic and French to be unveiled by the dignitaries who would soon arrive.

There were some false alarms as two presidential cavalcades rushed past on their way to the large, newly-constructed Al-mourabitoune conference centre almost 20km out of town, where the summit was taking place.

Mauritanian President Mohamed Ould Abdel Aziz arrived soon thereafter, in a hurry and followed, among others, by a couple of vehicles carrying black-balaclava-clad and sunglass-bedecked sharpshooters. He disembarked and took his seat in the marquee, only getting up again, bodyguards in tow, to walk out to the street to meet the more low-key cavalcade of President Cyril Ramaphosa, fresh from the roomy, cool private villa belonging to the deputy Speaker of the Mauritanian parliament, with its tantalising but leaking blue swimming pool and fountain in the front yard.

The presidents sat down and made small talk for the camera. Ramaphosa asked Aziz what this road was called before the renaming, and Aziz told him it’s new, the road had no name before. It seemed somewhat strange for such a large road, but he was truthful: many roads in Nouakchott have no name.

Some big ones are known by locals, such as the roads named after the pan-Africanist Gamal Abdel Nasser, and after historic dates like March 5 (which marked riots against the government) and November 28, which marked the country’s independence. There is even a road named after the Parisian Champs-Élysées.

The meet-and-greet ritual is repeated a third time as Rwandan president and current AU chairman, Paul Kagame, arrived, but this time there’s no talking as they sat down, Ramaphosa with a camera-friendly Cheshire cat grin, with ministers Lindiwe Sisulu (international relations), Rob Davies (trade and industry) and Nosiviwe Mapisa-Nqakula (defence) to his left.

They got up to do the unveiling, cameras in tow, and then the speeches.

Aziz, in Arabic and through an English translator, said Mandela’s struggle was for equality and fraternity. “He overcame and defeated the system, and dismantled it. Mauritania stood forcefully by the side of their brothers of South Africa in support of his fight against apartheid.”

He was proud to be part of the 100th celebrations of his life, Aziz said:

“It’s sharing with all the freedom fighters of the world all the values that Mandela stood for. Freedom against racism, and freedom from all discrimination on the basis of colour or creed.”

Mauritania, like South Africa, is a country with ethnic diversity (there are Arab-Mauritanians, and black Mauritanians, who are themselves subdivided into groups) and with similar current-day struggles for equality and tolerance. The country also has a very recent history of slavery, which was only made punishable in law a decade ago and is still furtively practiced by a small percentage of the population.

An activist attending the road re-naming said Mandela inspired their fight against slavery. Aziz declined to mention the scourge by name and instead kept it general:

“The Mauritanian population considers its ethnic and cultural diversity as a source of rich wealth, and we should resist all types of extremism and racism.”

Extremism was a hot topic as two devastating bombs went off in neighbouring Mali in the course of the summit, where security was tight.

Ramaphosa, speaking in English with an Arabic interpreter by his side, said South Africa was honoured that Mandela’s life and work was honoured all over the continent and the world, “not only honouring him because he was an iconic leader, but because he was a pan-Africanist.

“Nelson Mandela was very much a pan-Africanist in his identity.”

It was “humbling”, Ramaphosa said:

“For us it confirms very much that we as South Africans are completely part of Africa and we stand for the values and ideals that the African continent stands for.

“This recognition also confirms the unity of our continent Africa, and the diversity of this continent and its people. Nelson Mandela’s struggle for human rights was not only for South Africa, but Africa as a whole, and it was against tribalism and racism, and [for] the acceptance of diversity.”

Children dressed in the traditional dress of various African countries sang and waved flags from the AU’s 55 member states as music played. The trio of presidents looked on and smiled, but it was possible to imagine that, were he still alive, Madiba would have rather jumped in and jigged along with the kids.

It was a blitz ceremony, as the leaders were whisked away again immediately, but it was very different from former president Jacob Zuma’s hosting of a large but ill-attended gala dinner in the swanky Sheraton Hotel at his last African Union summit six months ago in Addis Ababa. Three weeks later he was out of office, and his peers must have sensed then already that he was a has-been, Madiba magic or not.

Mandela’s centenary and his birthday month offer a timely reminder of the good he did, also related to his views of the continent.

Many people in South Africa might not know where Mauritania is, but the reverence for him here and elsewhere in Africa should inspire South Africans to emulate his pan-Africanism and take an interest in the continent. DM