Six years later, cops are in court but justice is elusive 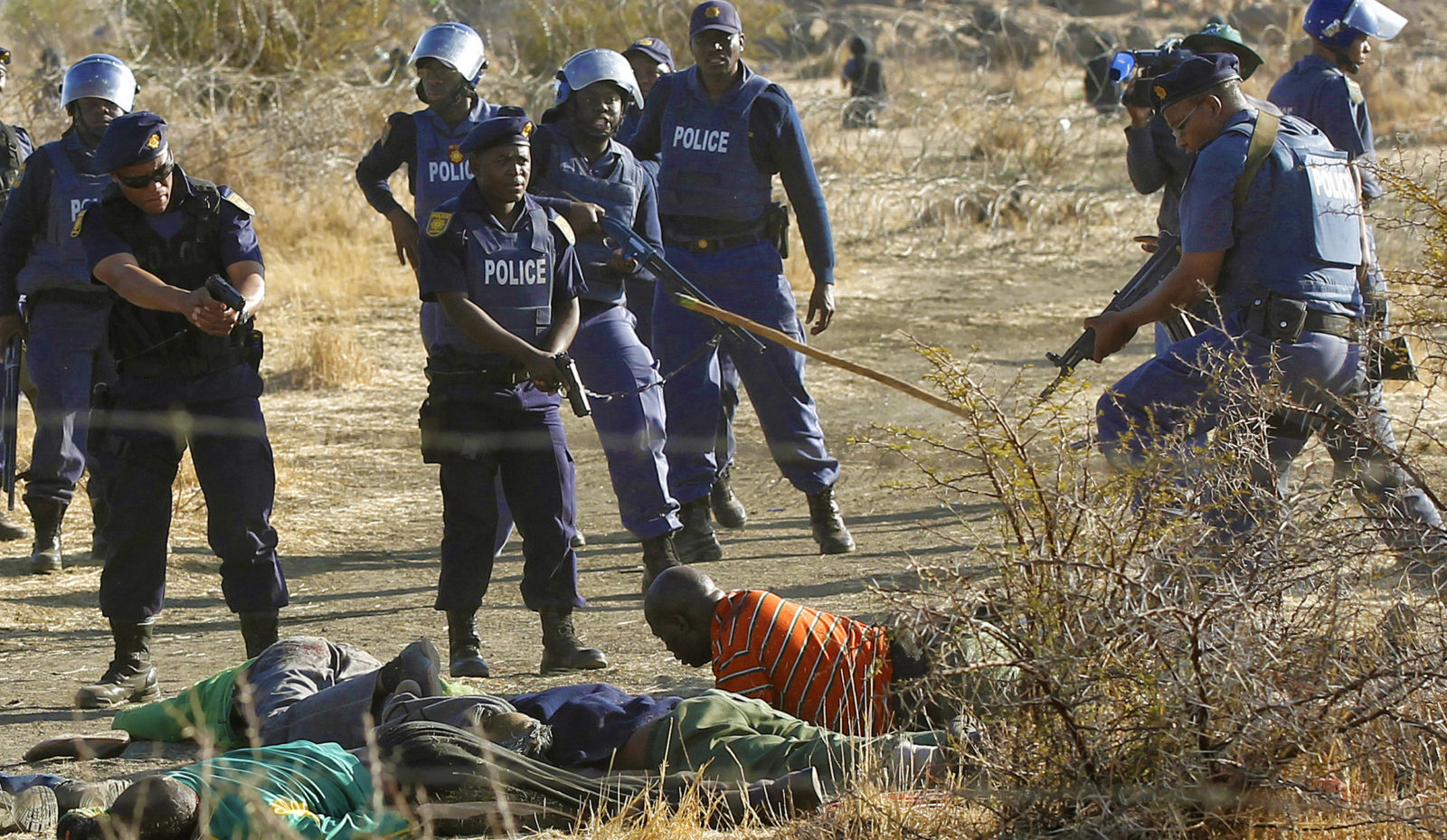 In this file photo, policemen give instructions to an injured miner (bottom right) after the striking miners were shot outside Marikana on 16 August 2012. (REUTERS/Siphiwe Sibeko)

Almost six years after the Marikana massacre, police officers are finally in court, meaning families might finally find justice. But don't get your hopes up yet. The cops in the dock are only accused of a fraction of the murders and real accountability and redress remains elusive.

On the morning of 13 August 2012, Lonmin production team leader Julius Langa’s body was found near the Marikana railway with 18 incisions on his chest, back and upper limbs. He left his wife to go to work earlier that morning before he was probably murdered by striking mineworkers.

If the police didn’t later fire tear gas, Langa might have been the only person to have been killed in Marikana that Monday.

Lonmin miners demanding a pay increase had been on strike for days and had already clashed with National Union of Mineworkers (NUM) officials and killed security guards and non-striking employees.

On 13 August they marched to the Karee shaft to see if anyone was working. Security said the area was empty and they headed back towards the koppie, a small Marikana hill that was later to become infamous as the headquarters of the strike and a symbol of both murder and resilience.

Then-North West Deputy Police Commissioner William Mpembe had just returned from leave. The overall commander of the operation, he took almost 100 cops to intercept the strikers as they returned to the koppie. Two SAPS members and three strikers ended up dead as a result of the two camps meeting.

Mpembe told around 200 miners to surrender their traditional weapons – pangas, assegais and spears. After they resisted, the miners, crouching and singing, ignored his demands and marched on. Mpembe decided to escort them to the koppie, before the chaos began.

As they walked, Warrant-Officer Daniel Kuhn fired tear gas. The situation exploded. What could have been avoided with proper planning turned deadly. Warrant Officers Tsietsi Monene and Ronnie Lepaaku, and three strikers, Thembalakhe Mati, Phumzile Sokanyile and Semi Jokanisi were killed in the clash.

August 16, 2012, when police killed 34 miners in a single day might be known as the Marikana massacre, but the first criminal charges to be brought against police officers relate to what happened on 13 August.

Six SAPS officers or former SAPS members were in the North West High Court on July 18 2018, their second appearance, charged with murder, attempted murder, defeating the ends of justice, contravention of the Independent Police Investigative Directorate (Ipid) Act, and contravention of the Commissions Act. They’re out on bail while the pre-trial hearing was postponed to September 14.

For years activists have been waiting for police officers to face trial. After sitting through the Marikana Commission of Inquiry for two years, victims’ families have long been waiting for justice, but the National Prosecuting Authority (NPA) has raised questions with who it’s charging and why these are the first cops to go on trial.

None of the cases from 13 August are clear-cut and it’s questionable as to whether they will result in convictions, leading to questions as to why perpetrators for the cold blooded killings on August 16 walk free while prosecutors pursue what appear to be more complicated cases.

Former deputy provincial commissioner Mpembe, now security head for mining company Thisa, is the most high-profile of the accused. He’s charged with four counts of murder and six counts of attempted murder for the deaths and injuries on 13 August.

Essentially, he is being prosecuted for failing to adequately plan for and manage the situation, and allegedly ordering Kuhn to fire the tear gas that caused the chaos and led to four deaths, including those of his own officers, Lepaaku and Monene.

“The commission is of the view that Major General Mpembe’s denial that he gave an order to fire a tear gas canister (or for that matter stun grenade) must be accepted,” concluded the Marikana Commission of Inquiry report.

The balance of testimonies from cops suggested Mpembe did order Kuhn to fire tear gas, but due to contradictions from accusers and what appeared to be a blame game after the fact, the inquiry did not uphold the claims. Mpembe was demoted after Marikana before he left the force after over 25 years in service.

Vermaak was in a helicopter as events unfolded and when he saw officers being attacked he fired around 20 tear gas cannisters and 10 stun grenades to deter the strikers. He saw them disarm police of their firearms, particularly an R5 rifle, and decided to land and try to help.

He says he then took Mpembe, who he claimed was frantic and under threat from other SAPS officers for putting their colleagues at risk, to safety before asking other cops to pursue those who had taken the R5. Officers had already been killed. The pursuing cops chased the strikers to the river where there was a standoff. There’s different versions of what happened then, but Sokanyile was killed by the police.

Vermaak is charged with instructing the officers to shoot at the strikers, which he admitted he called for at least once. Mguye, Mogale and Sekgweleya, now in the dock, fired at the strikers, likely along with other cops, which they say was in self-defence and on Vermaak’s instruction. They fired multiple rounds. The striker Sokanyile was killed by cops but the inquiry could not say who fired the fateful bullet.

At the inquiry, Vermaak broke ranks with his officers and was represented by evidence leaders rather than the SAPS counsel. Most police stuck together during the hearings but he gave evidence to suggest SAPS was at fault for deaths on 13 and 16 August.

After almost two years of sittings, the Marikana inquiry didn’t get to the bottom of who was responsible for the 13 August killings, although names were named and some are have now been charged.

They named the cops who could have killed Sokanyile, but for the deaths of Jokanisi and Mati on 13 August, while the police were almost certainly responsible, there’s no clear evidence tracing the killings back to particular officers.

Representing 36 family members of miners who died in Marikana Socio-Economic Rights Institute attorney Zamatungwa Khumalo said she hopes to get more information on the charges during the pre-trial hearing. While she hoped the charges may be a first step, she said a key issue for her clients was charges against police relating to August 16.

“That’s the predicament: we need answers from the 16th and we do not have them.”

Lawyers at the commission of inquiry and the inquiry’s report itself made much clearer findings against police regarding the killings on 16 August, but no charges have yet been laid, except for charges against four cops, including Mpembe, that were also heard this week relating to not correctly reporting a death of a miner.

Ipid and the NPA did not respond to questions regarding their ongoing investigations regarding the Marikana massacre, but Khumalo had heard Ipid was planning to recreate the whole scene to help determine who is responsible. While some officers are in the dock, particularly those who have fallen from SAPS grace, others are given the benefit of the doubt despite obvious there being clear evidence for charging them for multiple murders.

While victims’ families wait for criminal justice, they still haven’t been paid compensation for the loss of their loved ones. In February 2018, President Cyril Ramaphosa, who was cleared for causing the deaths as a Lonmin executive, said compensation was almost ready, but Daily Maverick understands compensation, despite discussions being at advanced stages, is being held up because the justice minister hasn’t signed off on the offers.

Justice for Marikana’s dead and their families remains elusive and despite cops now appearing in the dock, the available evidence suggests convictions will be difficult to achieve. Almost six years on, the families continue to suffer from an administration that doesn’t take the cases seriously, despite Ramaphosa’s comments. DM