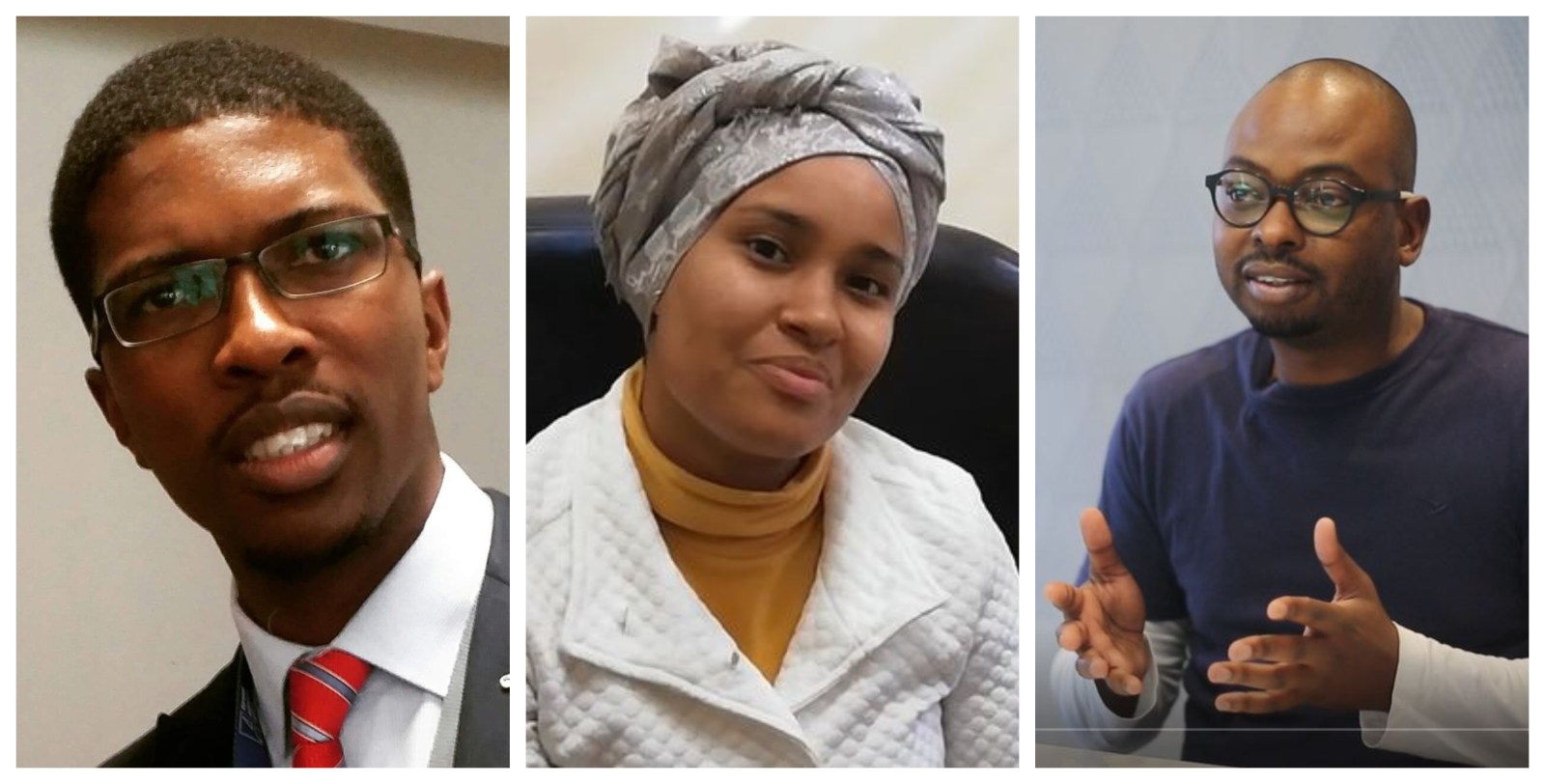 MPS are often accused by the youth of being out of touch with their needs. In the fifth democratically elected Parliament, there are a handful of MPs who are disrupting the traditional narrative of an MP. They are young and in touch with the issues youth face. Daily Maverick spoke to three MPs to coincide with Youth Day celebrations on Saturday.

According to voter registration statistics from the Independent Electoral Commission, 12 million people under the age of 40 are currently registered to vote in South Africa. Ahead of the next elections in 2019, young people will be key to determining where votes lie. But while the youth vote might be a factor, their representation in Parliament is limited.

1. What is the state of the youth?

Hlengwa: “We suffer from what I call the two in one syndrome in this country. We have pockets of youth excellence generally, and even smaller pockets of black excellence in particular, where young people have made significant strides in their various fields. But at the same time, we cannot negate the fact that inequality remains one of the challenges of this country.”

Mbhele: The youth needs to understand “the fact is that if our police service is dysfunctional, and crime is on the rise, your pursuit of pleasure in hitting the nightspots on Saturday means that when you are walking out of the club at 2am you might get mugged and stabbed. So your ability to enjoy your Saturday night out is very much linked to the state of governance.

“I would say that the youth should start expanding their horizons and thinking beyond just the good times. The youth should think about how the quality of the good times is linked to the bigger issues and they should play a role in influencing and affecting that by punishing poor performance and rewarding good governance.”

Motara: “As young people we need to cut the umbilical cord.” Motara believes young people across the political spheres need to sit down and have a serious discussion on what they want in the future – 20 years from now – only then can young people move forward as a society.

2. What is the state of politics in South Africa at the moment?

Hlengwa: “South African politics is at a crossroads; we are at an opportune moment for change where we have 25 years to reflect on the progress made or lack thereof.”

Mbhele: “It’s a sh** show. We all know about State Capture playing out for years and years. I think for me the sense of shock I have had about the state capture allegations is the sense of how did it get so bad, so deep right under our noses?” Mbhele says he felt like he failed somehow, for not being vigilant. “I am very concerned for the state of the economy, the state of public finances and what that means for governance and service delivery.”

Motara: “Generally, things need to change. Someone once said there is a fossilisation of leadership in Africa.”

3. What does Youth Day mean to you?

Hlengwa: “If there is one lesson we can learn from the youth of 1976 it’s that we must understand their struggle in context, that above and beyond – not wanting to learn in Afrikaans, so the fact that they understood that Afrikaans would limit their hopes for the future, it would limit their opportunities.”

Mbhele: “Youth Day is important for the obvious reason of what it commemorates. I have over the years come to a sort of cynicism of the public holidays, because of the way they have been misused and abused and really diluted especially through government events on the days.”

Motara: “Youth Day, June 16 reminds me we’ve always got to be forward thinking, what we do today, or what we impose today or what we resolve today is it going to help us 10 years down the line?”

4. Which issues do you think are the youth of South Africa most concerned about?

Hlengwa: Hlengwa mentioned young people are concerned they are not able to make ends meet, they are concerned their hope of freedom has not been materialised into economic emancipation. He also said young people find there is still an ongoing bias against them, benefitting the generation of those who were previously advantaged.

“I joined the ANC formally when I was 20 years old,” said Motara, who described her family as an “ANC branch” full of activists and her grandparents. She grew up in the ANC and still believes the party is the only solution for the country.

After initially studying psychology, Motara enrolled in an economics and finance course after being nominated by ANCYL structures to go to the National Council of Provinces, where she sits on its finance committee and appropriations committee. Motara is the only woman on the NCOP finance committee and felt she had to educate herself, so she started studying economics.

When asked about the ANC’s 54th conference in Nasrec, she admitted she supported losing candidate and now minister in the Presidency for the National Planning Commission for Policy and Evaluation, Nkosazana Dlamini Zuma. Motara said it was because “the time had come to break new ceilings” and if other women saw it could happen with Dlamini Zuma’s possible election – what would they not be able to achieve in 10 years?

When asked if the ANC appealed to young people in particular despite its recent divisive history, Motara told Daily Maverick the ANC has staying power and is in a “rebirthing situation” currently.

Hlengwa is one of Parliament’s youngest MPs in a party with its oldest MP – outgoing IFP leader, Prince Mangosuthu Buthelezi, age 89.

“The South African Parliament is richer with his presence and I consider him as the father of the House and that voice of reason,” said Hlengwa about Buthelezi.

Much of the IFP support is KwaZulu-Natal based, and as IFP Youth Brigade leader, Hlengwa knows this. In the 2014 national elections, it ranked fourth in the vote tally, with only 2,40% of the voting population voting for the party. He told Daily Maverick there are now branches of the party opening in provinces such as Limpopo and Mpumalanga, North West and added “work is being done in the Western Cape”.

“I have been involved in politics for 14 years, I first joined the DA youth back in 2005, in my second year at Wits. I found that I enjoyed the operational mechanics of campaigning. That SRC election at Wits in 2005 was when the political bug bit, and there was no turning back. Obviously we lost dismally, but I still enjoyed it nonetheless,” Mbhele told Daily Maverick.

Before joining the fifth Parliament, Mbhele served as spokesperson for Western Cape Premier Helen Zille. Following the 2014 national elections, Mbhele took up a seat in Parliament, where he now serves as DA shadow minister of police.

Being the first openly gay black MP in Africa, Mbhele says that it had never occurred to him that he was the first black African MP to come out.

“It was the day after elections when my friend gave me a call, he said ‘Zak, do you realise you are the first openly gay MP in Africa and this country?’”

Responding to whether the DA is a safe space for openly gay politicians, Mbhele said that “the DA is the most free space one can be openly as a public rep, as a staff member”.

Interestingly enough, in 2017, Mambaonline.com had written an article featuring 10 openly gay MPs – all of whom are from the DA.

“The DA is generally a very free space to be gay, but obviously it depends where in the party you are; the more rural you go, the older the age gets. But the part of the party that I navigate which are younger, cosmopolitan and worldly, there are no issues.”

Many South Africans have said the DA is anti-black and anti-poor, Mbhele responds to this claim, saying:

“This is obviously not true. If the DA was anti-black in that simplistic sense of the word, then I wouldn’t be able to exist or thrive in it. If you look at our policies, there is no basis for that.”

He continues: “Contrary to the impulses of some of my colleagues is that when people make a statement like that it comes from somewhere, a misinterpretation, a stereotype of the party or a certain lens that I think comes down to poor communication on our part that allows that to exist.” DM