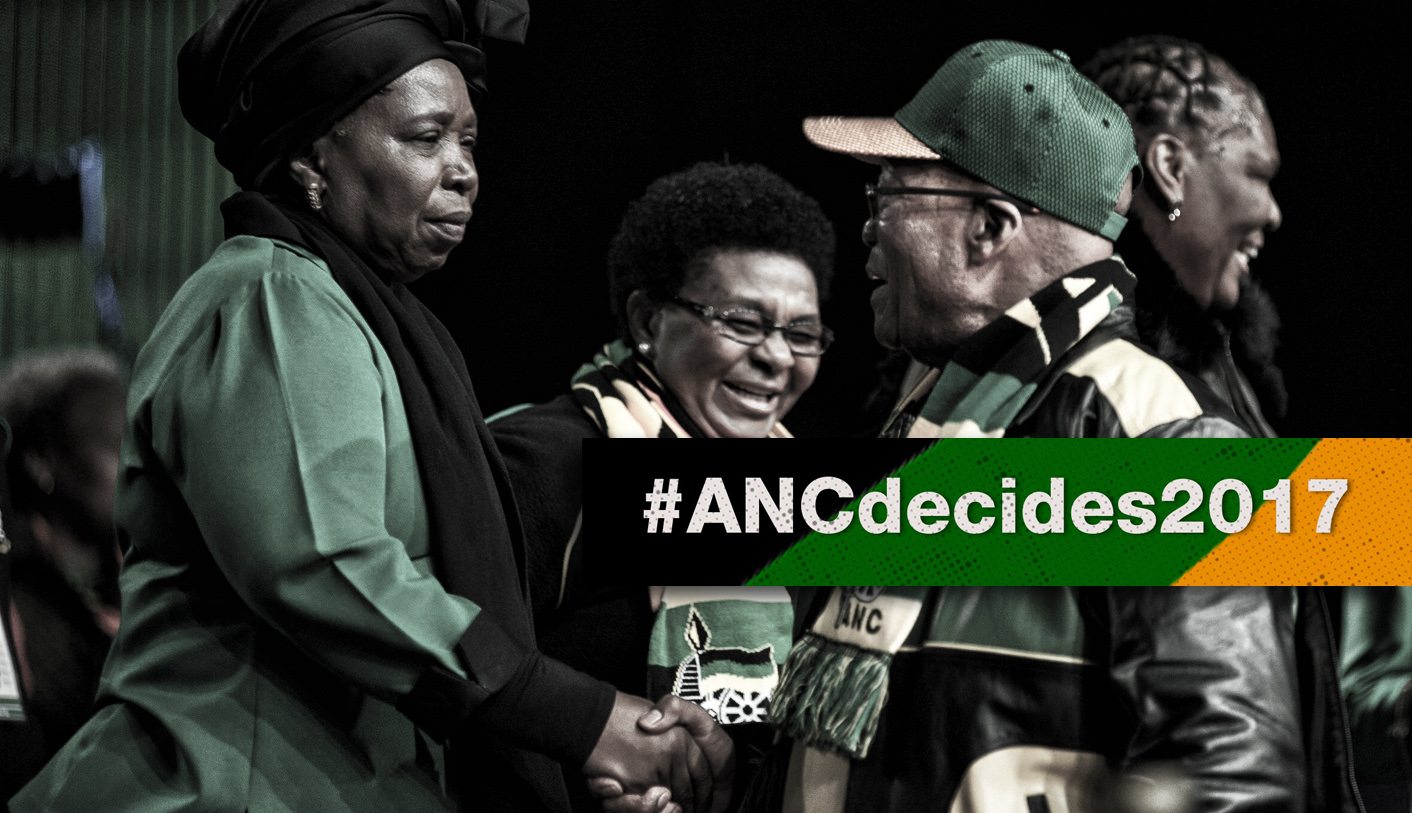 With the ANC’s conference finally just hours away, it still seems to hazy. This extended drama deep into the extra time has meant that the speculation about who will actually win and what will happen afterwards is still very much at a fever-pitch. There are those who believe the choice is between Heaven and Hell, and that what happens will consign us to rapid economic growth or dictatorship. Fortunately, and unfortunately, the choice is probably less stark than that, with different shades inhabiting the known universe. Still, it can be said, with fair amount of certainty, that if Nkosazana Dlamini Zuma wins, there will be a big and negative reaction from many parts of society, particularly in urban areas. By STEPHEN GROOTES.

It is sometimes difficult to believe how much our political space has opened up in the last two years. Back then, the ANC in Parliament was still wholeheartedly backing President Jacob Zuma on Nkandla; Hlaudi (he who has no need of a second name) was able to laugh through parliamentary hearings, and behind the scenes, the Gupta were running the country and making an indecent fortune. These days, some ANC MPs vote against Zuma in confidence motions, the SABC is being reborn, and everyone knows that the Guptas are thieves on a cosmic scale.

The head of the commission conducting the ANC’s internal elections announces that Dlamini Zuma is the new leader. After so much public criticism of Zuma, the signal that will be sent to these communities is a massive “Stuff You”. It will look like the ANC has simply, and deliberately, turned its back on these groups. The people who live in Sandton and Soweto who did not turn out for the ANC in last year’s local elections will feel that their message has simply not been heeded. That Saxonwold would have won again.

Two years ago, there also would have been a reaction, but it would have been fairly muted. Now, what would happen could make the protests after the sacking of Pravin Gordhan look like a picnic. Organisations that have campaigned on certain issues but remained largely out of politics, such as SECTION27, may be forced to side with groups like OUTA and Save SA. They would be joined by people who are currently still in the ANC and hold legitimacy among many of the people who have voted for the party in the past.

Imagine, for a moment, a protest march against State Capture led by Mmusi Maimane, Derek Hanekom, Julius Malema, Pravin Gordhan, Archbishop Thabo Makgoba, Blade Nzimande, and perhaps even Ramaphosa. The power of that image would be massive. And of course, it would also confer legitimacy for those who have supported the ANC for what it did during the Struggle, but are now thinking of going elsewhere.

A victory by Dlamini Zuma could also serve as a signal for many in the middle classes to engage in politics. Here, as in many other countries, middle-class people tend not to march. White South Africans, who generally don’t have a culture of marching, have tended to stay away from getting their feet dirty; some see attending a book launch as a supreme form of political protest. That could change. This middle-class group of people may not have the numbers to change the results of elections, but they do have significant resources, and may be exercised enough to use them.

There is also the problem that Dlamini Zuma has done nothing at all to assuage any of their concerns. These are people who read the Sunday Times, which they criticise, but they still read it. There has been no response from Dlamini Zuma to the front page claim, through Jaques Pauw’s book, that she received money from a cigarette smuggler. The lack of response is actually incredible. In other democracies, if a politician finds out that someone has a photograph of them with such a person, there are standard responses. You have a press conference and explain you don’t really know the person, or didn’t really know that they were criminals, and you publicly give their donations to charity.

In this case, the only person who commented from her campaign was that pinnacle – no, oracle – of honesty, Carl Niehaus.

In our pantheon of rogues, Niehaus has a particular place. Because there is such a long track record of duplicity, because it is obvious that he has a problem and needs help, and because he has confessed to being a liar and a fraudster. This means that anyone who does business with him, particularly in politics, is asking for trouble. But instead of moving away from him, Dlamini Zuma actually thanks in him in public for his work. This is the kind of thing almost designed to push away many in the urban middle class.

Those who support Dlamini Zuma may feel that the party can survive all of that, that all of this is overstated. But there is evidence to support it. Polling on the potential leaders of the ANC shows that only 16% – yes, 16% – of people asked think she would be a good leader for the party.

That is a tiny number. Possibly too tiny for any eventual recovery.

But the problems that a Dlamini Zuma-led ANC may face in middle-class society may be nothing compared to what will happen in Parliament. The opposition parties would not be able to contain their joy upon her victory. Every opportunity in Parliament will be used. Malema will be uncontrollable, the DA will be more disruptive, and it will be, as they say, “lit”.

However, the real problems would be in the ANC’s caucus. At the moment the body that includes people who voted against Jacob Zuma is hanging together, just. Possibly the only reason Zuma stayed in office was because ANC MPs were told that they could remove him at the ANC’s conference without splitting the party. With that option no longer open, there would be no reason for them to stick to party discipline. Many tactics can be used. Instead of outright public betrayal, ANC MPs can simply be “sick” when legislation has to be passed, denying the party a quorum. Confidence votes would be excruciating for the party’s managers, and of course the opposition would call them every week. The most powerful person in the country would suddenly be the Speaker, Baleka Mbete, who could decide whether a vote should be in secret or not. And even if she kept that vote open, you may find ANC MPs angry enough to vote against Zuma, or Dlamini Zuma, whatever the working relationship the pair might opt for.

Either way, the situation would certainly be almost impossible to manage.

In the far out areas, it is entirely possible that some communities, who already question the legitimacy of the ANC and government, will do this more intensely. This means more symbols of the state could be in danger. For these communities, these include clinics, police stations and schools. Zuma already tends to avoid these protest situations; a Dlamini Zuma-led ANC would surely find them even harder to manage.

This means that overall there could be a hollowing-out of the state. This is bad for the middle classes, but absolutely awful for the poor. Just imagine another few years of Bathabile Dlamini’s management of the social grant system.

Amid all of this, it should not be forgotten that Ramaphosa would also face significant problems if he were to win. He also would face people in the ANC’s parliamentary caucus who may want him out. Managing the ANC would be very difficult for him too; the opposition parties would bring up Marikana loudly and often. It certainly would not be Heaven if he were to win.

However, ANC delegates tend not to read the Sunday Times or Daily Maverick. This is a battle for control of structure and parts of the ANC and thus voting delegates. It is not about hearts and minds. Which is too bad. DM

Photo: Nkosazana Dlamini Zuma greets President Jacob Zuma as he makes his entrance onto the main stage before the start of the ANC’s 5th National Policy Conference at the Nasrec Expo Centre in Johannesburg. Picture: IHSAAN HAFFEJEE