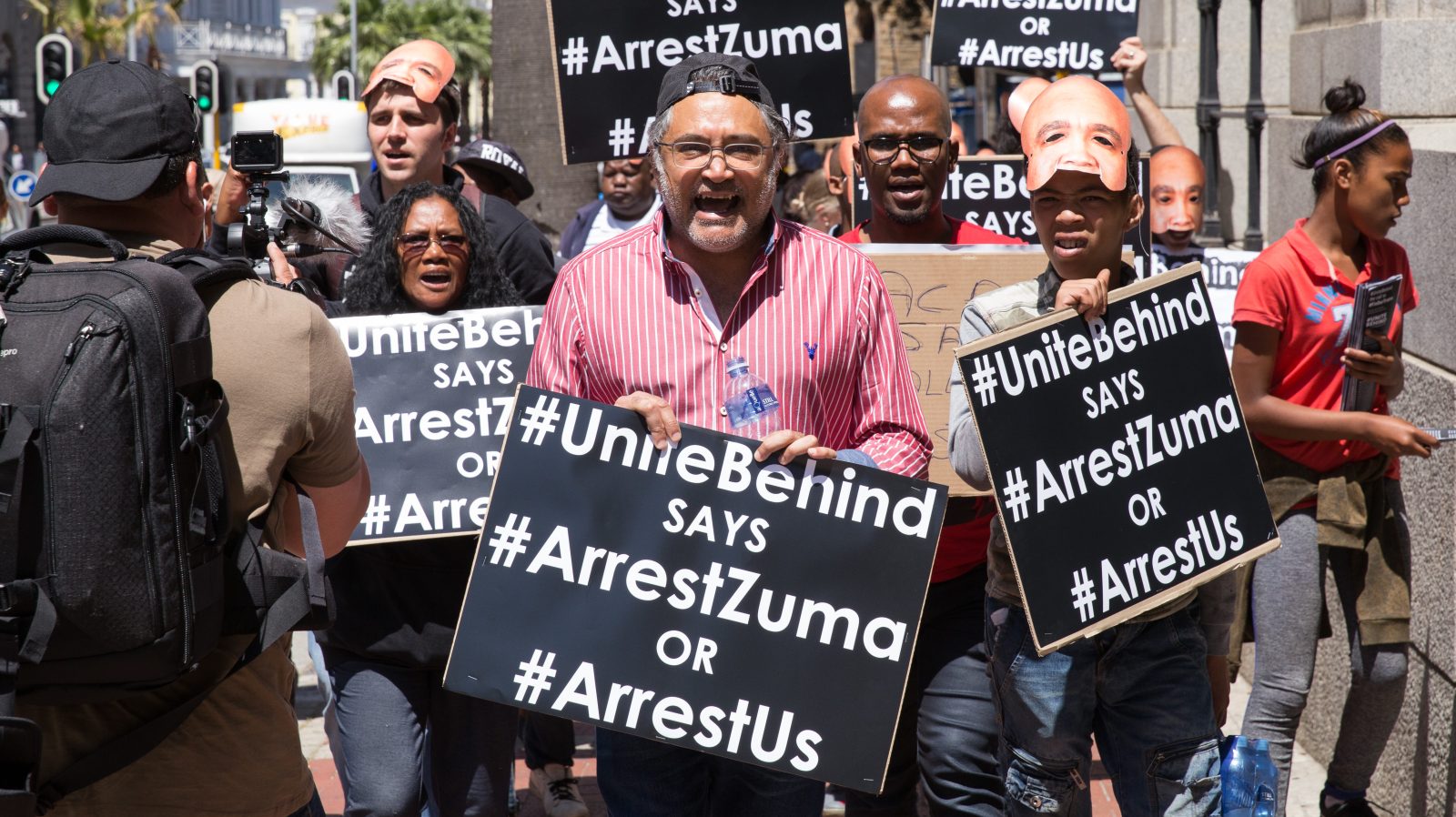 A former veteran activist has withdrawn as a speaker at a platform hosted by #UniteBehind, following reports that the activist group had decided that organising secretariat Zackie Achmat must step aside after media reports allege that he had been involved in a sexual harassment cover-up.

In a leaked letter seen by Daily Maverick, veteran activist and retired senior counsel Rob Petersen has withdrawn from speaking at a meeting hosted by the civic organisation #UniteBehind. In the letter to #UniteBehind’s Bruce Baigrie, Petersen objected to the organisation apparently “distancing” itself from its organising secretariat, Zackie Achmat.

#UniteBehind is a broad umbrella coalition group of organisations and activists who rally behind a common call for a just and equal society.

Achmat, a veteran human rights activist who co-founded the Treatment Action Campaign, has recently been accused of a sexual harassment cover-up at Equal Education. He has denied the allegations.

Petersen’s letter read: “The cause of my withdrawal is the decision taken by the Co-ordination Committee of #UniteBehind on 11 June 2018 to distance the organisation from comrade Zackie Achmat — effectively suspending him from leadership — on entirely insubstantial grounds.

“The minutes of the Co-ordination Committee have been widely circulated, and the decision is intended to be public. I have searched in vain for any concrete justification: I can find none. The minutes adopt a moral tone, but in my opinion the decision is cowardly and immoral.

“The decision is based ostensibly on the fact that Equal Education is to establish an inquiry inter alia into whether, in 2011, as a leader of EE, Zackie Achmat was ‘dismissive of complaints’ of sexual harassment involving Doron Isaacs.”

#UniteBehind confirmed receipt of the query by Daily Maverick on Friday morning, then following initial publication of this report, responded later saying that Achmat remained involved in the #FixOurTrains campaign and had agreed to recuse himself and that the meeting had not been adequately minuted. It said that the word “distance” was not referred to in the meeting and that it did not want to pre-judge Achmat.  (see full response below)

When contacted by Daily Maverick about the letter on Friday morning, Petersen declined to comment.

In the letter, Petersen writes: “In my own view, on the facts as they appear to me now, the organising secretariat of #UniteBehind has been panicked by scurrilous social media chatter reinforced by unprofessional journalism, behind which lurks a long-standing personal vendetta against Doron Isaacs that has yet to be brought to light. In this pursuit, the unscrupulous attackers have been quite willing to broaden their campaign to include Zackie Achmat and others of integrity, and to attempt even to have donors withdraw support from Equal Education.”

In May 2018, Mail & Guardian reported on sexual harassment allegations within lobby group Equal Education. Isaacs, Co-founder and treasurer, had been accused of sexual harassment and in the same investigation by Mail & Guardian, Achmat had been accused of covering up the claims. Achmat subsequently told Radio 702 that he would take the publication to the Press Ombud as he believed the manner in which the paper gathered its news was unjust and caused pain to him and others.

On 18 May, Isaacs resigned as Equal Education treasurer. According to Mail & Guardian, Isaacs did not accept any wrongdoing, saying he is prepared to submit himself to an independent investigation.

Isaacs is not the only member of Equal Education in recent months to resign following allegations of sexual harassment. Former general secretary Tshepo Motsepe stepped down after several allegations of a sexual nature were levelled against him by staff members. He too denied any wrongdoing.

#UniteBehind’s written reply in full: “What the minutes of #UniteBehind Coordination Committee (CC) cannot capture is our difficult attempt to steer between the two poles of attributing premature judgment on the one hand and doing nothing on the other hand – realising that the latter fails to address the sensitivity and gravity of the issue. The nuances of this discussion could only be appreciated by those present.

“1. Our decision on Zackie is that he only be involved in the essential work of #UniteBehind. This largely relates to the #FixOurTrains campaign, where his knowledge and experience remains crucial. The provisional timeline for this is the duration of the Equal Education inquiry where we expect Zackie to be within the terms of reference. However, we are awaiting further information from Equal Education on this and understand that it’s important not to rush this process. It should be noted that the #UniteBehind CC has the power to amend its decision in light of new information. Zackie has not been expelled or suspended from #UniteBehind, nor is #UniteBehind distancing itself from Zackie. The words distance or expel do not appear in our minutes because they never arose in the meeting and nor was it ever the intention.  To do so would have been prejudicial.

2. “Yet we should have minuted that the decision that we came to was the same as Zackie himself suggested and had already put into practice (we apologise for omitting this). Although Zackie’s suggestion did not determine our decision it was common knowledge to those of us in the meeting.  Zackie took responsibility to recuse himself as a public representative or spokesperson for #UniteBehind from the 21st of May. Again while this was common knowledge to members of the #UniteBehind CC, it was not reflected in the minutes which was an error of omission on our part.

“We won’t comment on Rob’s letter beyond what we’ve expressed above.” DM

This article was updated with additional comment and details following initial publication.