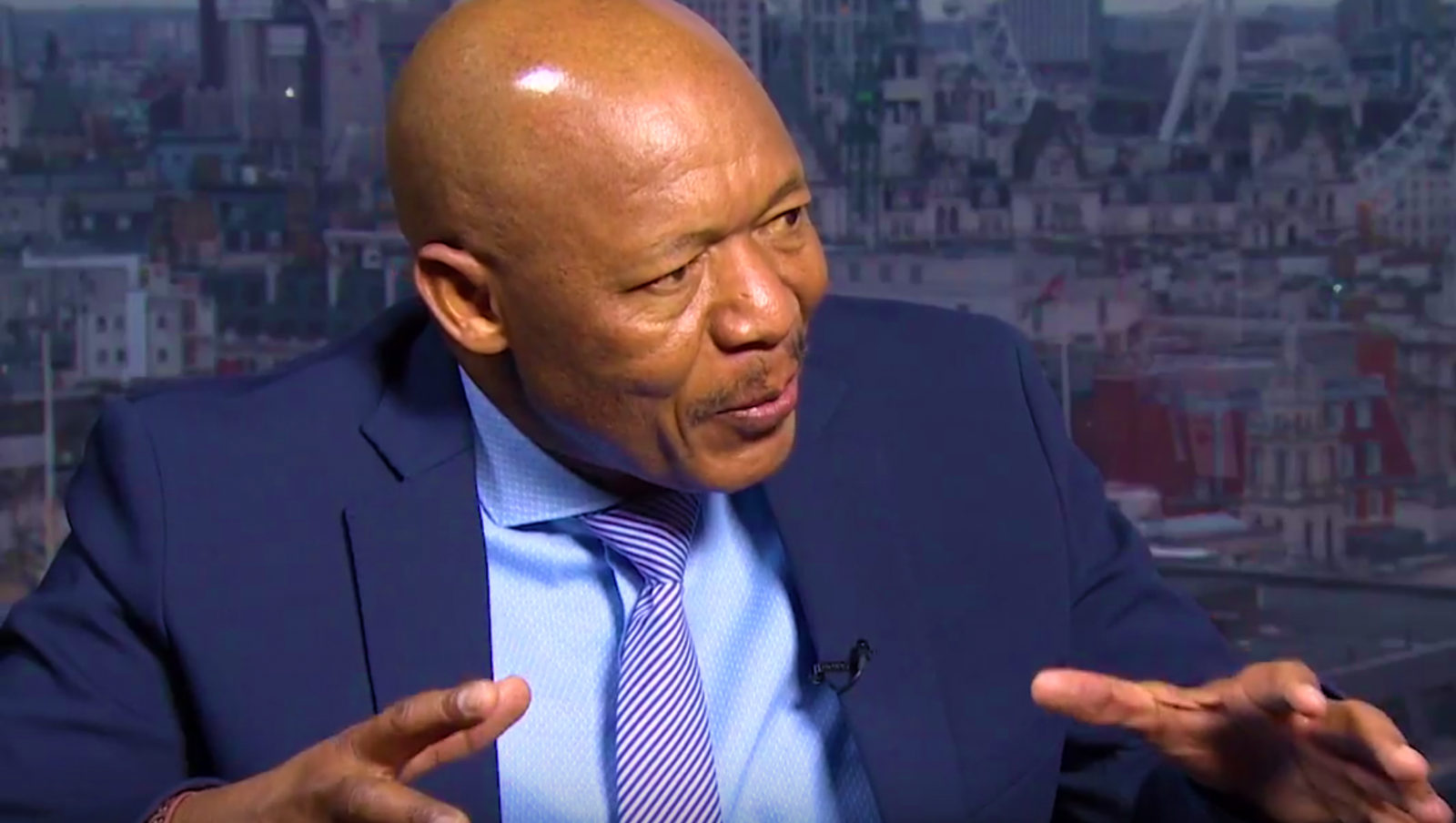 PIC CEO Dan Matjila ( A YouTube still from The European)

Claims of Dan Matjila’s looming suspension arose earlier this week when it emerged that the PIC’s investment committee is looking again at the corporation’s recent R4.3-billion Ayo Technology Solutions Ltd transaction, according to Fin24.

Public Investment Corporation (PIC) CEO Dan Matjila on Thursday came to Parliament for the finance committee’s public hearings on legislative amendments aimed at greater transparency by the state-owned manager of R1.9-trillion government pensions and social savings. He kept a low profile in a back row of the meeting venue, answering only two direct questions, as parliamentary rules require. But, inevitably, afterwards there were journalists’ questions about word of his impending suspension. “I have no idea where the rumours of my suspension come from,” was his response.

For the second time in eight months, Public Investment Corporation (PIC) CEO Dan Matjila finds himself under pressure. In September 2017, when a whistle-blower fingered him for having channelled money to a girlfriend, the PIC board “expressed its confidence” in him after, as the official statement put it, he “provided detailed documentary evidence of the decisions made by the PIC. Although the board accepted these representations, it also decided on an internal audit committee probe. Two weeks later, on 29 September 2017, the PIC in an official statement said:

“The Board has concluded that the allegations were baseless and that Dr Matjila is cleared of any wrongdoing.”

But on Thursday Matjila remained urbane.

“I have no idea where the rumours of suspension come from. I’ve been there for 14 years. I am comfortable. We’ve been doing good… Our clients are happy.”

And he was backed by the PIC, which subsequently dismissed “false and malicious persistent media reports” of Matjila’s suspension.

“The PIC views these unsubstantiated allegations as part of a campaign to destabilise the PIC and cause harm to the institution’s reputation,” said PIC Corporate Affairs Head Deon Botha in a statement.

“The PIC would like to reiterate that Dr Matjila remains the CEO of the PIC and that the PIC management team continues to carry out the corporation’s investment mandate and the important responsibility of managing the assets of its public sector clients.”

The wholly state-owned PIC manages just over R1.9-trillion in government workers’ pensions and savings. The Government Employees Pension Fund (GEPF) accounts for 87.72% of the PIC, the Unemployment Insurance Fund (UIF) 7%, and the Compensation Fund 0.96%.

One of the reasons for the MP-initiated legislative amendments for greater disclosure of investment decisions, investment criteria like job creation, industrialisation, sustainable development and transformation and board representation of trade unions and National Treasury arose as PIC investment decisions have increasingly come under scrutiny, often raising red flags in the days of State Capture.

Such investments included the R5-billion one-month bridging finance paid in February 2018 to troubled Eskom, the power utility that emerged central to State Capture in the parliamentary inquiry. It also included investment in Steinhoff, whose share value plummeted when accounting and other financial irregularities emerged in December 2017 – in January the PIC told MPs value could still be extracted – and in VBS Mutual Bank, now under curatorship due to lack of liquidity and reserves and governance concerns, including actively chasing councils as clients in contravention of the Municipal Finance Management Act (MFMA).

And there was the R4-billion investment in an offshore oil deal with a US-based company that filed for bankruptcy, as amaBhungane reported.

While the PIC accounts to Parliament through an annual integrated report and briefing, details are often difficult to trace. It contains few details, but cites what is called “case studies”, effectively selected investments in, among others, education, property, mining, telecommunications, health and land.

From the 2017 Integrated Annual Report it emerges that the PIC invested R700-million – R200-million of government employees’ pensions and R500-million from the Unemployment Insurance Fund (UIF) – alongside a private sector financial company, in the United Farmers Fund. The fund is aimed “at providing investors with solid financial returns by investing in farmland and agricultural infrastructure, while at the same time creating jobs, alleviating rural poverty…”.

It has invested in the Northern and Western Cape, Limpopo and KwaZulu-Natal, largely in citrus and gapes, but also olives and cash crops.

Aside from investing in student accommodation, the PIC has also invested in Eduloan which, since its establishment in 1996, provided R5-billion in loans to more than 849,000 students, according to the PIC 2017 Integrated Annual Report.

The PIC, and not only in Parliament on Thursday, has said it supports transparency – that’s why over the past two years it has written a bundle of letters to depositors for their consent to disclose unlisted investments – but it is limited by Financial Services Board and other financial sector regulations.

Details of listed investments are in any case publicly available, but could not be disclosed by the PIC, according to Botha, because of possible media headlines of “PIC losing confidence…” in one sector if its investment decisions change year on year. That listed investment information was just too market sensitive.

The PIC and National Treasury were on the same page on this one. Treasury also argued that if greater disclosure was required, then the GEPF, UIF and other laws should be changed, not the PIC Act.

But there are some curiosities. The National Treasury wanted the deletion of the committee Bill’s provision for the PIC to make available housing funding. But the PIC already does this, according to its 2017 Integrated Annual Report:

“(F)or the 12 months ended March 2017, an amount of R520-million in affordable housing loans was financed to 1,406 individuals and/or households representing an average home loan of approximately R370,000.”

The public hearings were largely uncontroversial as trade union federations Cosatu and the Federation of Unions of South Africa (Fedusa) and the Public Service Association (PSA) agreed with the legislative proposals for union representation on the PIC board and greater disclosure on investment decisions. These, after all, involve the monies of 800,000 Cosatu members from various affiliates, and 237,000 PSA members.

“The money invested by the PIC, it’s not state funds. It belongs to workers,” was how Cosatu parliamentary liaison Matthew Parks put it, adding later: “If the PIC collapses, we can close the country. It will affect all of us.”

But it was amaBhungane co-founder Stefaans Brümmer’s call for greater disclosure, including of minutes of investment decisions, that set the cat among the pigeons.

“(Disclosure) is not there to take away power from the executive… capable managers doing their jobs. It’s not there to prevent black economic empowerment. It’s simply there for the public to have access to the process.”

It was the united front of ANC MP Thandi Tobias and EFF MP Floyd Shivambu who argued against this, invoking market and commercial sensitivities, while alluding to ulterior motives by those asking for greater transparency.

Shivambu argued that because the PIC operates in the market, the same conditions needed to apply to state and private asset managers.

“Let’s pass a law all asset managers must disclose. We have an obligation to protect all people. We are not going to sabotage a public institution through transparency… (pushed for) by representatives of white monopoly capital, who still want to continue to own the economy.”

Shivambu said the PIC “facilitated black people’s participation in the economy” and the narrative of crisis at the PIC arose because “people have vested interests”.

This was echoed by Tobias, who at one stage asked straight-out: “You as amaBhungane represent others?”, arguing that the only reason for such disclosure to be requested was on behalf of rivals in the market economy.

“Why would we as legislators be interested in a listed investment… that has nothing to do with legislation,” said Tobias, adding: “I do not agree to pin you (PIC) down to give us information”. DM

Compliance and complicity: The role of India’s judiciary in the advancement of ‘democratic totalitarianism’