EXPLAINER: The fuel that fans the deadly taxi war in Ca...

The fuel that fans the deadly taxi war in Cape Town 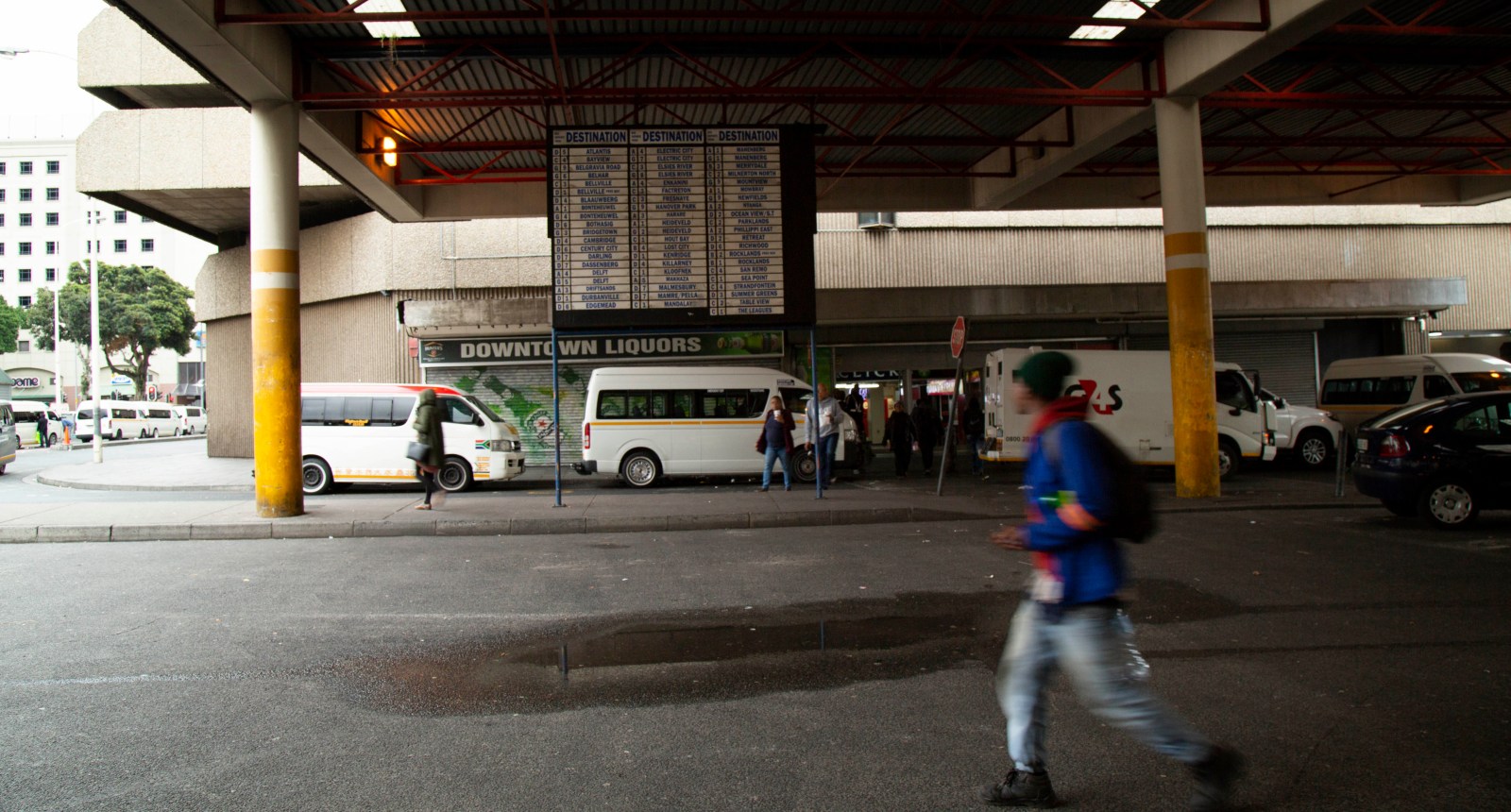 The conflict between rival taxi interests in Cape Town, ostensibly over routes, started on 11 May with the fatal shooting of two taxi drivers at the Delft Taxi Rank. The assassinations of taxi drivers has led to other taxi drivers staying off the road, thus impacting on transport availability for commuters.

At least 13 people have been killed in the latest flare-up of taxi violence in Cape Town. The conflict, ostensibly over routes, started on 11 May with the fatal shooting of two taxi drivers at the Delft Taxi Rank.

It has been reported that the conflict is related to a battle over taxi routes among rival associations that include the dominant players, Cape Amalgamated Taxi Association (CATA) and Congress of Democratic Taxi Associations (Codeta).

The assassinations of taxi drivers has led to other taxi drivers staying off the road, thus impacting on transport availability for commuters.

A taxi driver operating in Nyanga, and wishing to remain anonymous, was quoted in the Cape Times as saying:

“Taxis have not been operating since Saturday morning. We fear for our lives because we don’t know who is behind the killings and why we are being targeted. … We were told that the shooters get on a taxi, pay the taxi fare and then shoot him (the driver). We believe there are no specific targeted persons, but any drivers operating in the Nyanga, Gugulethu and Philippi East are targets.”

What are the root causes? Why now?

“It is a fight of supply and demand, there are more relative, lucrative routes in the Western Cape because of the growth here and the relatively low unemployment.”

One of the areas most affected has been Delft, with three people killed in two weeks. Farida Ryklief, from the Delft Community Policing Forum, says the forum was still unsure of the root causes.

Cape Amalgamated Taxi Association (CATA) spokesperson, Andile Seyamo told IOL online: “We are busy researching what the causes of these shootings are. Only drivers were shot.”

What routes are affected?

Delft, Nyanga and Philippi are some of the areas affected. According to a list compiled by Eyewitness News, Philippi has had the highest number of killings, with six people shot and fatally wounded. Nyanga is a close second with at least three deaths. There have also been shootings in Khayelitsha and Wynberg, with the city areas mostly shielded from the impact.

While taxi drivers have been shot at and some killed, commuters are getting caught in the crossfire. According to Eyewitness News, last Friday a 35-year-old commuter was shot and injured on the corner of Emms Drive and Terminus Road in Nyanga.

Taxi associations and authorities have urged commuters not to panic, saying they would be protected.

The forum had previously held successful mediation attempts between rival associations, “but this time Codeta and Delft Taxi Association was not prepared to sit with CATA, ‘cause its always been their way or no way,” said Ryklief.

What are the root causes of the deadly conflict?

In an effort to stabilise the situation, Western Cape Transport MEC Donald Grant has threatened to shut down problematic taxi ranks in Cape Town. Noting that the violence has reached crisis proportions, Grant was quoted as saying:

“I’m giving notice of my intention, based on evidence, to close certain ranks and routes to shut them down.”

“The SAPS Crime Intelligence branch (has) been deployed to gather information on what is seemingly a planned hit, targeting Mr Daniels who was killed last week, and to urgently locate the perpetrators,” Grant said in answer to questions from Daily Maverick.

Daily Maverick previously reported on the killing of Nazeem Daniels who was the chairperson of the Delft/Cape Town Taxi Association. He was the first person to be shot dead at the rank – during peak hour – in the latest spate of violence.

Smith told Daily Maverick that since the start of April, the city’s traffic services had issued 1,811 fines to taxi drivers in Delft, and impounded 20 vehicles.

“Officers have also executed 197 warrants, with a monetary value of R397,240. This resulted in 18 arrests and 74 others were released with a warning,” said Smith.

“POPS and local police are monitoring the situation with other law enforcement agencies at all taxi ranks, and they will remain in these areas until we are satisfied that law and order has been restored. Investigations continue on all these reported cases,” said FC Van Wyk of the South African Police Services in the Western Cape.

Hearings aimed at investigating the root causes of the taxi violence in the city are currently under way.

“It will take a couple of days for the hearings to be completed as well as the information to be assessed,” Donald Grant told Cape Talk on Tuesday.

What are politicians saying?

In response to the killings that happened over the weekend, the Portfolio Committee on Police conveyed its condolences to the bereaved family and community members.

“The murders over the weekend in Cape Town are worrying in the context of the high number of commuters that use taxis daily. The lives of the majority of our people are put at risk as a result of these apparent disagreements within the associations,” said Francois Beukman, chairperson of the committee.

Beukman also called on community members who may have information on the crimes to contact their nearest police station or submit the information to the toll-free crime line.

What is the industry doing?

Codeta spokesperson Andile Khanyi called for an end to the taxi violence in an interview.

“Within Codeta there is no fighting, so we don’t know why these killings keep on happening, I got a phone call to say that one of our guys was killed,” Khanyi said.

Khanyi said Codeta is willing to work with police to help with the crisis.

“We are waiting for police to come and speak to us. We’re willing to work with them to end this violence.”

“We’re going to call our members in the meantime and tell them to be very careful about where they go,” Khanyi told Independent Online.

Attempts to reach Codeta, CATA and Santaco by Daily Maverick were unsuccessful at the time of publication.

The taxi industry’s contribution to the economy

The taxi industry nationally contributed an estimated R40-billion to the Gross Domestic Product annually, the former Minister of Transport, Dipuo Peters, said at the launch of the National Taxi Industry Awards in 2016. There are about 150,000 to 200,000 taxis/taxi operators in the country and it was estimated that the industry transports about 15 million commuters per day, which is 68% of all commuters; and that commuters spent a minimum of one hour per day travelling in a taxi.

CATA broke away from Codeta in October 1994, according to a research paper by Jackie Dugard who is an associate professor at the University of the Witwatersrand.

The national umbrella body is SA National Taxi Council (Santaco), which was formally established in September 2001. It was founded after government’s intensive consultation process with taxi operators countrywide.

Conflict is not a new phenomenon

Taxi conflict has been a phenomenon for decades. In a research paper for the Centre for the Study of Violence and Reconciliation dated May 2001, Jackie Dugard stated that the violence that shook informal settlements in the Cape Peninsula between 1990 and 1992 was ostensibly related to commercial competition over routes between two taxi organisations, Lagunya, which represented the more urbanised African operators, and the Webta, which represented the more traditional African operators from rural areas.

In her research, Dugard explains that the roots of the taxi violence in Cape Town can be traced back to October 1990, when a shootout between Lagunya and Webta taxi operators outside the Golden Acre shopping mall in the city centre occurred. Tensions between the two associations had been simmering since 1986, when the formation of Webta upset Lagunya’s monopoly of the routes in the area.

More than 30 years later, taxi routes remain a major cause of conflict. DM