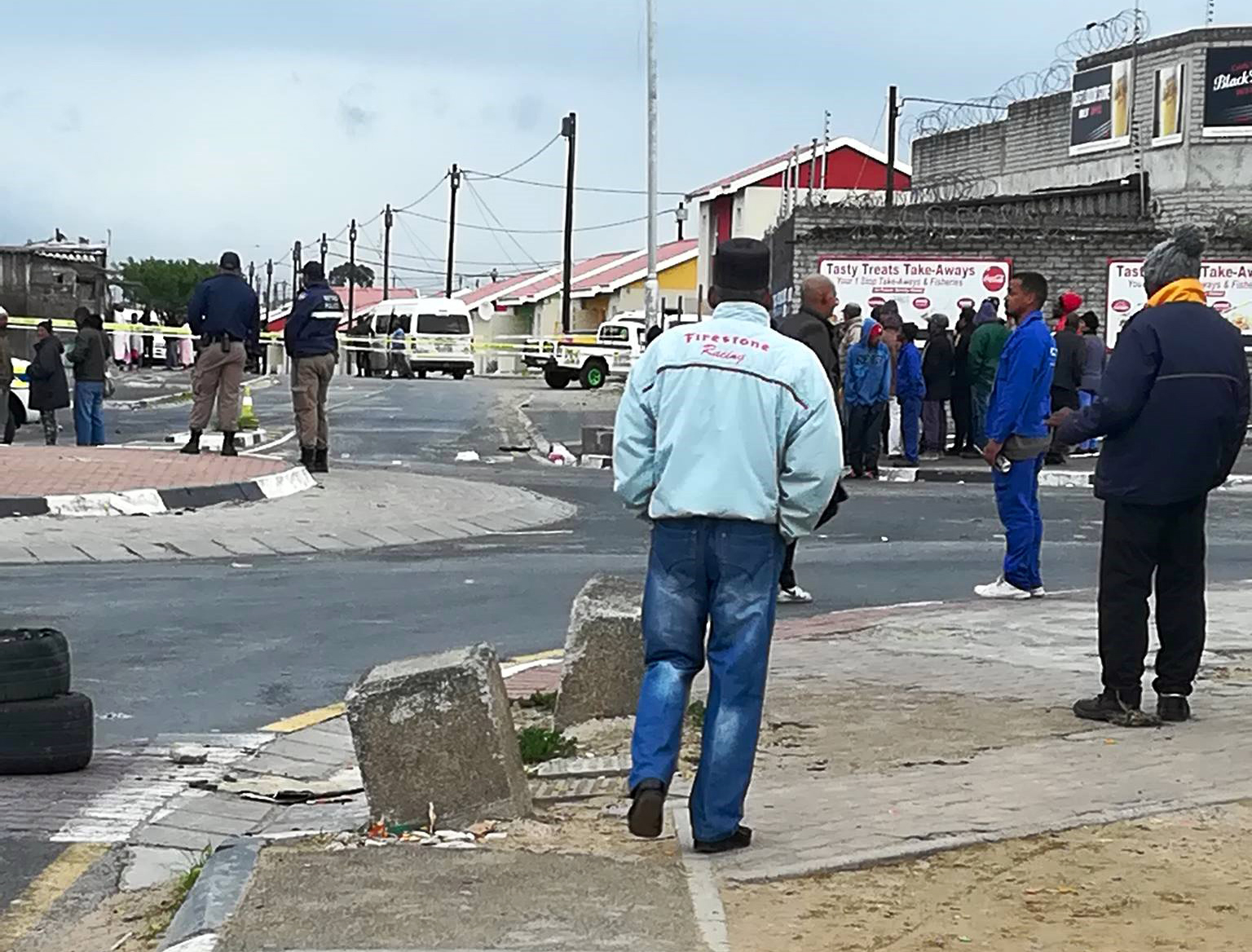 The scene were Daniels was shot on Monday morning in Delft. Onlookers gathered as police cordoned off the area. Image used with permission from Waar Brandit Inni Delft Facebook group

While commuters were rushing to catch taxis to work during peak hour, Nazeem Daniels, the head of the Delft/Cape Town Taxi Association, was shot dead – at the rank.

In commuter rush hour on Monday, just after 07:30, the Roosendal taxi rank in Delft had been cordoned off and six police vans were patrolling the area. A figure lay hidden in a silver body bag, right at the spot where commuters catch a taxi to the Cape Town CBD.

On the scene, commuters and residents, some of them in their pyjamas, said that the person inside the body bag was Nazeem Daniels, the head of the Delft/Cape Town Taxi Association.

On board a taxi to town, the driver said too that it was Daniels who had been killed. By 09:00, Facebook groups from Delft were speculating and talking about the shooting at the rank.

Last Thursday, Daily Maverick had spoken briefly to Daniels at the rank and scheduled an interview with him for later this week.

Daniels’ death was not the first death in the ongoing route dispute that flared up earlier in May, leading to the death of two taxi drivers on 12 May.

Police spokesperson Andrè Traut confirmed to Daily Maverick later on Monday that a 40-year-old man was shot and killed at the rank in Delft Main Rd at 06:50.

Unknown suspects fled the scene and are yet to be arrested.

“The motive is unknown and the circumstances are being investigated,” said Traut.

Confirming that it was Daniels who had been killed, Farida Ryklief from the Delft Community Policing Forum said: “It’s a great loss to the community”.

Ryklief described Daniels as not only a dominant figure in the taxi industry in the area, but heavily involved in the community, especially with the youth and the mosque.

Ryklief said the community policing forum was due to meet the Western Cape Provincial Police Commissioner and taxi associations about the taxi flare-up of taxi violence in the area.

“People are unsure and the area is still tense,” Ryklief told Daily Maverick.

Cata had not responded to media questions at the time of publishing this report.

Here is a timeline of the events preceding Daniels’s death:

Taxi disputes are not new to Delft. Over the past few years, route disputes between various associations have left commuters stranded and several taxi drivers dead.

In March 2017, two drivers were shot dead in conflict between Cata and Delft Taxi Association, which lasted for two weeks.

In April 2015, EWN reported on the killing of one person and injuring of two others during another violent flare-up in the area.