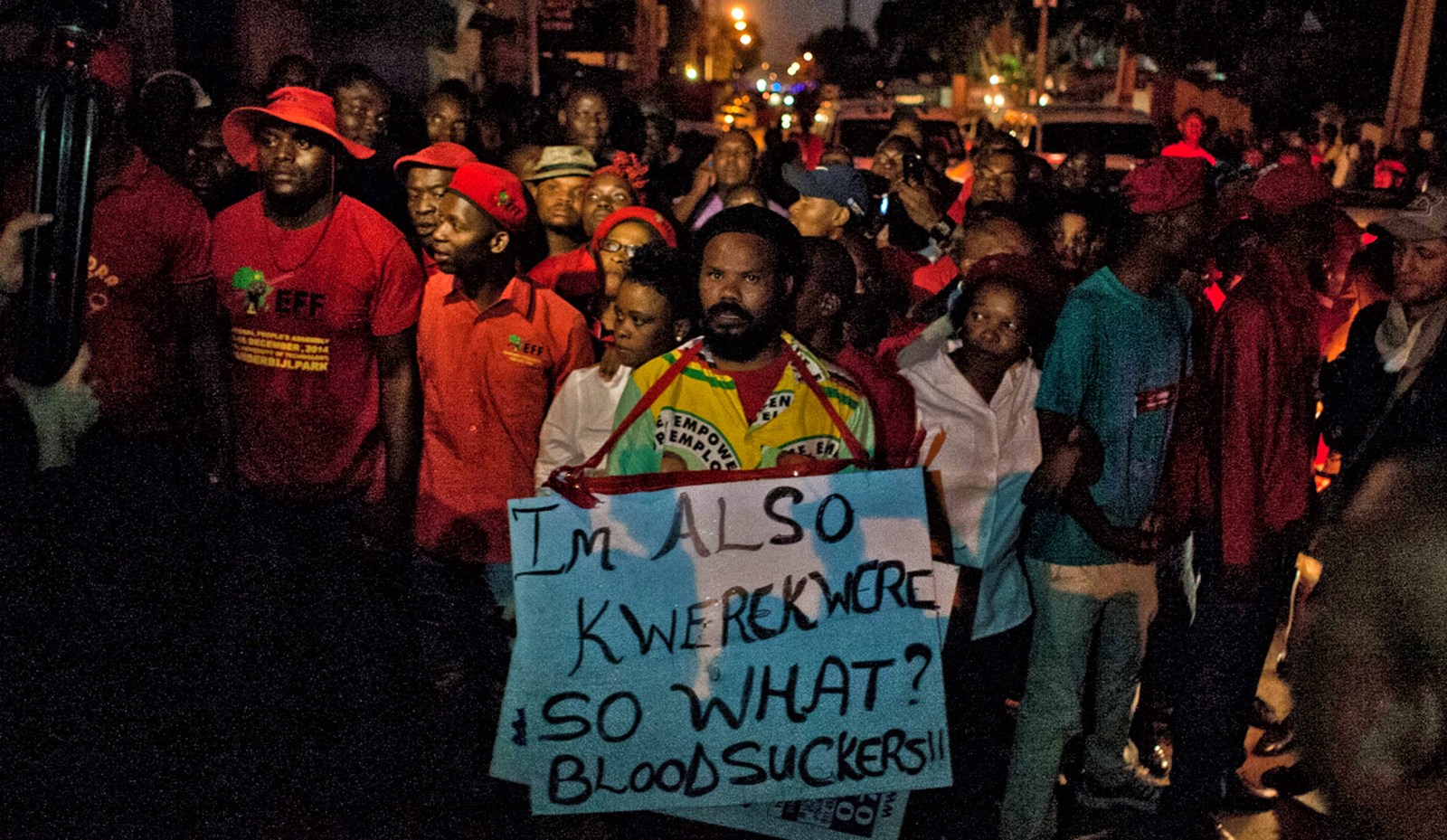 Marikana activist Napoleon Webster was found not guilty of murder on Tuesday after prosecutors accepted they didn’t have a case. He spent 202 days in prison and now wants to hold the NPA and police accountable for what he believes were politically motivated charges.

Everything that’s happened to Napoleon Webster over the last 16 months came back to him when he was found not guilty on Tuesday. He thought of his violent arrest and the 202 days he spent in Rustenburg Prison after his bail application was denied.

“I don’t want to lie to you, I was crying,” he said after Judge Ronnie Hendricks found him and five other accused not guilty of murdering Petrus Sabata in Marikana in December 2016.

Throughout his trial, Webster maintained his innocence and said the police and National Prosecuting Authority (NPA) targeted him due to his activism. The case against Webster was thrown out after prosecutors failed to link him to the mob justice killing and their witnesses proved unreliable.

Webster has a long history of activism and was often on the front lines of community and EFF protests. He rallied to support victims of the Marikana Massacre and interrupted engagements of former president Jacob Zuma and then deputy president Cyril Ramaphosa to denounce their role in the 44 killings that took place over a week in the mining town in August 2016.

Webster was active on the ground in Marikana before his arrest. In 2016, he was part of the occupation of 290 government-built RDP homes in Marikana, claiming the ANC planned to give the houses to its supporters.

As the battle between occupiers and the government continued and tensions between the community and police remained strained, 39-year-old Sabata, an ANC councillor, was hacked to death by a group at his home in Marikana West.

Webster claimed ANC officials and mining company Lonmin conspired with authorities to have him charged to undermine activists in Marikana rallying on issues such as housing. They have vigorously denied the allegation.

Six of the 14 charged with the murder, including Webster, Mdlondozi Fundiwo‚ Aphindile Pungone‚ Gift Luveli‚ Nkululeko Msithwa‚ Luvo Soyizwaphi, were found not guilty on Tuesday after they made an application under Section 174 of the Criminal Procedures Act. Eight suspects remain on trial.

“If, at the close of the case for the prosecution at any trial, the court is of the opinion that there is no evidence that the accused committed the offence referred to in the charge or any offence of which he may be convicted on the charge, it may return a verdict of not guilty.”

Webster’s team presented evidence that proved he couldn’t have been at the site of the murder. Prosecutors last week admitted no evidence linked the six suspects to the murder and that testimonies from its two witnesses were based on malice and lacked credibility.

One of the discredited witnesses claimed Webster demanded sexual favours for a house, tried to rape her, and that the accused drank Sabata’s blood after killing him. Student activist Zwelake Mahlamvu and Media For Justice documentary filmmaker Sipho Singiswa were with Webster on the day of the murder and said he was not at the scene.

“The state’s failure to produce any evidence linking Napoleon Webster to this offence is clear evidence that this prosecution was brought, not to punish crime, but to stifle legitimate dissent in Marikana,” said Webster’s attorney Lindokhule Mdabe from the Socio-Economic Rights Institute (SERI).

“The prosecution, and the way it has been pursued, is yet another example of the abuse of the criminal justice system in aid of silencing the real and legitimate grievances of people living in poor communities across South Africa.”

Daily Maverick was unable to get comment from the NPA and Hawks in North West on Tuesday, but throughout the case they have denied allegations that the charges were politically motivated and until recently maintained they had a case against Webster and his five co-accused.

The activist said he should never have spent a night in jail and is considering suing the state for wrongful arrest and imprisonment. He said the police deliberately ignored his alibis and, after both their testimonies were unreliable, questioned whether the two witnesses had been paid.

Webster has described his time in prison in a cramped cell with 30 other men and no privacy. He was finally released in July in 2017 after his lawyers appealed the bail ruling. During his ordeal he said the police threatened him:

“They literally told me they wanted to kill me. When an officer says that, he knows he is justice itself.”

Webster’s court battles aren’t over. He was charged with escaping custody after police arrested him outside court in January 2017. He was then allegedly released, to calm an angry crowd. Webster alleged the police then fired live ammunition into the crowd, with a bullet grazing his head. His legal team will apply for that case to be dismissed.

Webster left the EFF last year and became a Forum for Service Delivery councillor in Rustenburg. He plans to continue his work but fears for others taking on the state.

“Every activist must know that in South Africa now the police want to pursue a political agenda. They can do it deliberately.”

Just last week the police in Marikana were accused of undermining a local group’s right to march, refusing to grant a permit for over six months. DM