‘Impossible’ for Napoleon Webster to have been at murder scene 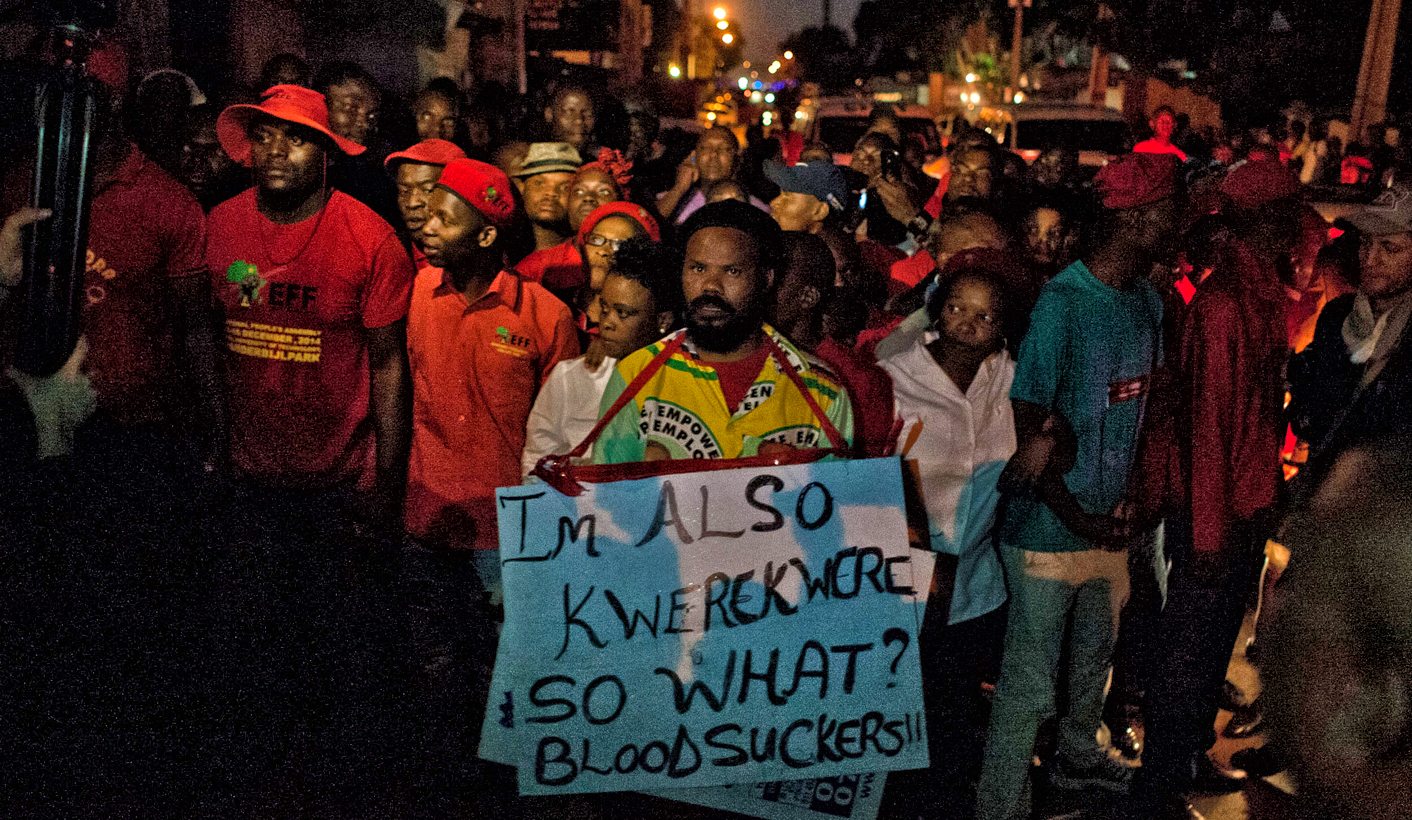 Marikana and Economic Freedom Fighters (EFF) activist Napoleon Webster returns to court on Wednesday on a murder charge. There are accusations that he is being targeted for his work in Marikana, with witnesses claiming he was nowhere near the murder scene. By GREG NICOLSON.

Napoleon Webster and eight other accused will return to the Bafokeng Magistrate’s Court in Rustenburg on Wednesday for a bail hearing after spending two months behind bars in connection with a crime some claim he didn’t commit.

Webster, along with Aubrey Seitsang, Sibonile Sobopha, Mdlondozi Fundiwo, Herbert Baqhesi, and William Nyanyane, was charged with murder for allegedly participating in a mob justice killing in Marikana West in December. Another three suspects were arrested this week. The nine are accused of murdering 39-year-old Sabata Petros Chale. Police say they were part of a group of protesters who marched to his house last year and hacked him to death.

Activist Nigel Branken, who has worked with Webster in the past, has been collecting testimonies from those who were with him when the alleged murder took place. Student activist Zwelake Mahlamvu said, “On the day of the murder, I was with Napoleon the whole entire day so therefore there is no way that he can be responsible for the murder. I believe these are trumped-up charges that are put up against him and he is being falsely accused of something he never did. It’s impossible for someone to be [in] two places at one time.”

Documentary filmmaker Sipho Singiswa, from Media For Justice, was also in Marikana that day. He said he was with Webster and a group of students and the activist could not possibly have been at the murder scene.

“At the time the alleged murder took place and Napoleon is [alleged to be] part of that, we were together at Shoprite,” said Singiswa. “It is impossible that Napoleon was somewhere else at 16:45, as the state alleges, because he was with us. There’s no way he was part of any murder.”

Hawks spokesperson Brigadier Hangwani Mulaudzi on Tuesday said the claims will have to be tested in court. “We’re just doing our job. We’re not worried about those things,” said Mulaudzi. “Those are allegations. If anyone has information they should take it to court, not use the media to bring in suspicion.”

Webster has recently been at odds with local authorities after leading a housing occupation in Marikana’s Extension 2. Around 290 RDP houses were occupied by community members and renamed “34 Mambush” in honour of Marikana strike leader Mgcineni “Mambush” Noki. The occupiers said government wanted to reward ANC members from outside the community with the houses. The North West department of housing, which has denied the allegations, warned it would carry out evictions, leading to concern over potentially violent clashes between SAPS and the occupiers, who said they were ready for a fight.

Marikana resident and EFF supporter Mkansi Tyrone S’busiso on Tuesday said Webster would never kill a community member as he was fighting for justice for the people of Marikana. There continues to be suspicion in the area of the ANC and police. “The ANC government is trying to silence all the activists by arresting them,” he claimed on Tuesday. “But we are not scared of them or shaken. We will keep on fighting. We remain strong,” he added. “Now [Webster] is two months without bail. Justice delayed is justice denied.”

Webster and five others were in court on Friday in a related case and granted bail, but Wednesday’s hearing will determine if he is released while awaiting trial. Friday’s case related to charges of escaping from lawful custody and aiding and abetting a suspect to escape. In January, Webster was attending the court hearing for others charged for the mob justice killing when he too was arrested in connection with the murder.

A protest erupted after his arrest, with supporters claiming Webster was released from a police vehicle to calm the crowd and the SAPS claiming he escaped with the assistance of five others. Protesters say police were heavy-handed and used live ammunition on the crowd. Webster claimed he was abused by the police.

Relations between mineworkers and police have been tense since 44 people were killed in a week in 2012, with SAPS offices killing 34 in a day now known as the Marikana Massacre. Sowetan on Tuesday reported that 18 mineworkers who took part in the 2012 strike appeared in court last month for the murder of three workers, two police officers and two security guards in the days preceding the massacre. A reported 65 witnesses are due to testify in the trial at Rustenburg Magistrate’s Court, set to run from July 31 to August 4.

The Marikana Commission of Inquiry recommended investigations be held into the murders and signalled that charges might be laid against both mineworkers and police officers. President Jacob Zuma last year announced that investigations were well under way into SAPS officers who played a role in the week of killing. National Prosecuting Authority spokesperson Luvuyo Mfaku on Tuesday said prosecutors are working with a team from the Independent Police Investigative Directorate, but the investigation is ongoing and there is as yet no decision to prosecute any SAPS officers. DM