Ramaphosa Q&A: No more easy wins for the opposition 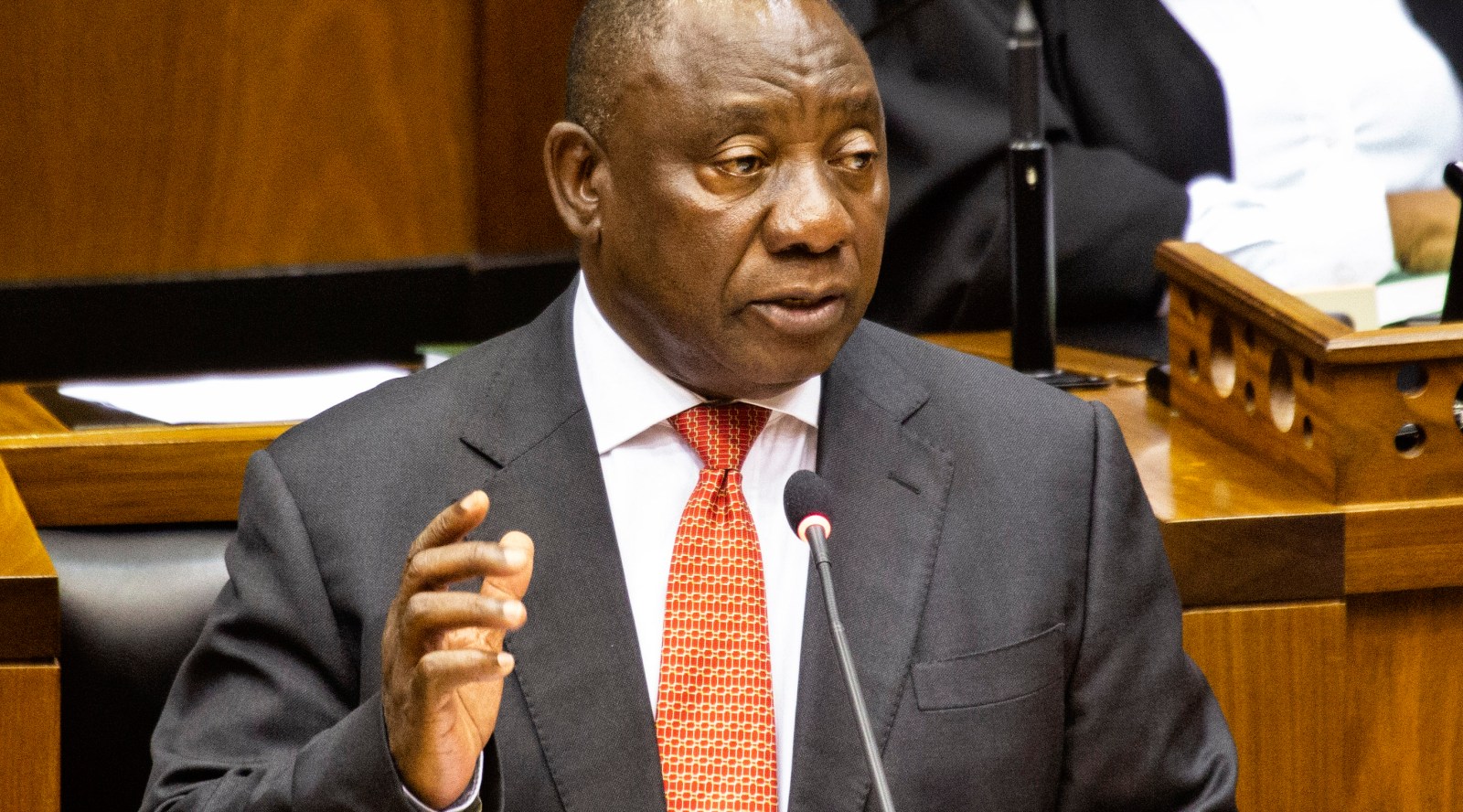 President Cyril Ramaphosa appears before the National Assembly for his second oral question and answer session since Parliament elected him as President of the Republic of South Africa in February. Tuesday 8 May 2019. Photo by Leila Dougan.

A review panel into the workings, mandate and capacity of South Africa’s intelligence service will be established in “the next few days”. That’s the one concrete thing that emerged during President Cyril Ramaphosa’s question time in the House on Tuesday amid talk of working together, talking up South Africa to investors and healing the wounds of the past, including over land dispossession. But scrutiny of the State Security Agency (SSA) brought a crucial announcement: it marks another step in reversing State Capture (mis)governance and the unscrambling of a bulwark of the Jacob Zuma administration, a politicised intelligence service.

It’s been reliably learnt that more detail about a review panel of the State Security Agency (SSA) would emerge when State Security Minister Dipuo Letsatsi-Duba delivers her budget vote next Friday. It’s the most obscure of all of the 40 budget votes, “Vote 7: National Treasury (State Security)”, and very little detail ever emerges of the R4.7-billion budget National Treasury transfers straight into a secret account. But it’s one of the rare glimpses into the intelligence world as the minister traditionally provides a broad-sweep statement of priorities and government thinking around intelligence.

That there would be closer scrutiny of how the SSA did its job was the word amid last month’s controversy over SSA boss Arthur Fraser’s high-stakes gamble of withdrawing the security clearance of Inspector-General of Intelligence Setlhomamaru Dintwe, effectively ending his oversight mandate. At the time, Dintwe, who in an unprecedented move turned to the courts for protection, was investigating Fraser for his role in a parallel non-state, and thus unconstitutional, intelligence set-up, the Principal Agent Network (PAN) programme.

On 17 April there was a terse announcement that Fraser had been transferred as director-general of correctional services with “immediate effect” after talks with the minister and president in what appeared to be moves to limit the embarrassment to government. Dintwe’s top secret security clearance was reinstated.

That was step one. The review panel President Cyril Ramaphosa announced during his Q&A in the National Assembly on Tuesday is step two.

“I will shortly be setting up a review panel to assess the structure of the agency (SSA) relative to its mandate, and inquire into its systems and capacity… I have also instructed the Minister of State Security to take all necessary steps to attend to all governance and operational challenges confronting the agency and to work to restore public trust in this critical institution,” said Ramaphosa, acknowledging concerns about governance scandals and shenanigans at the SSA. At the same time the president announced that Police Minister Bheki Cele is taking similar steps in relation to SAPS crime intelligence.

“That (SSA) review panel will be composed of people well adept, not only in intelligence matters, but also security matters. They will be able to get to the bottom of some of the shortcomings intelligence services face,” added Ramaphosa in response to a follow-up question from Cope leader Mosiuoa Lekota.

“As we do a reform process of all these institutions, we are going to keep an eye on what is set out in the Constitution and what is in the interest of the people of South Africa.”

This SSA review panel is one of the important steps towards the return to constitutional governance Ramaphosa has hitched his political wagon to, alongside boosting economic growth.

Amid entrenched ANC factional interests, but also a divided Cabinet that has retained several Zuma loyalists and a riven senior civil service, such announcements are notable. As are changes to State-owned Entities (SoEs), long fingered as key to facilitating State Capture.

But these announcements are hard won, and often delayed, amid the careful manoeuvrings to ensure everyone can save face and is more or less on the same page of unity. This is also illustrated by the machinations around North West Premier Supra “Black Jesus” Mahumapelo at both ANC level, with its National Working Committee having recommended his sacking, and at governance level, with Wednesday’s Cabinet meeting set to consider a reportback by a team of ministers on the state of the province following the national government’s intervention in the North West health department.

Much of the content of Ramaphosa’s replies in the House was stock standard stuff. Much of it was already canvassed in his February State of the Nation Address (SONA) – like the R20 per hour national minimum wage as a tool to redress income inequality or the process considering a constitutional amendment for land expropriation without compensation – or arose from subsequent Presidency statements like the $100-billion overseas investor drive and appointment of four investment envoys. On that front, the delay of the investment conference promised at SONA within three months is perhaps another indication of some of the governance issues facing the Presidency.

And while Ramaphosa during Tuesday’s Q&A at the podium showed he stays on message, he also showcased his political nous. Opposition parties long used to being able to take digs at Zuma and his scandal-ridden administration during presidential question time are struggling to step up their game.

And so DA leader Mmusi Maimane was left grim-faced when Ramaphosa congratulated him for recognising white privilege and black poverty in his Freedom Day speech, and offering the ANC’s protection after Maimane was subsequently confronted by senior leaders in his parliamentary caucus, according to City Press.

“We will be the first to defend Mmusi Maimane against those in his own party who want to deny the reality of racial inequality … We will rise in unison, Mr Maimane, to defend you. Because your message was on point; you were absolutely correct,” said Ramaphosa.

And Ramaphosa sent a clear message that the usual DA strategy of taking matters to court, as Maimane did over Fraser’s redeployment to correctional services, would end up paralysing the opposition party.

“The matter is before our courts. And as much as I would have wanted to engage Mr Maimane, I have found I have to now respond to the papers they have lodged in court. Truly, Mr Maimane and the DA do warrant a reply…. So we will be able to provide those answer through those court papers.”

But any EFF gloating over the DA’s smooth dressing down quickly came to a loud and somewhat chaotic end. Ramaphosa took away the political point the EFF thought it had scored with getting its motion on land expropriation without compensation adopted in the House with ANC in late February.

The EFF, Ramaphosa said, had simply taken over an ANC resolution, and in any case the motion adopted in the House was exactly what the ANC had resolved on at its December 2017 national conference. And he highlighted how the ANC parliamentary caucus amendments to the original EFF motion, inserting the need for food security and consultations, directly arose from the ANC conference resolution.

The president had a point and had made his point. But the EFF objected – vocally and repeatedly – that he was “deliberately misleading the House and the public”, as EFF MP Sam Matiase put it. He refused to withdraw that statement and was ordered to leave the House. He did.

Further EFF points of order were ruled out, by the presiding officer House Chairperson for Committees Cedric Frolick.

Ramaphosa’s control slipped once, but dramatically, when he told DA Chief Whip John Steenhuisen to “shut up” – not just once, but thrice. It’s unparliamentary language in the House rule book, and Steenhuisen was quick on his feet.

“Shut up is unparliamentary… He must withdraw,” he said, adding later: “This is not the NEC (ANC national executive committee). This is Parliament!”.

Equally quickly, Ramaphosa got back into presidential mode, even as ANC rules mistress, Higher Education Minister Naledi Pandor, offered her assistance by pointing out that persistent heckling from the DA benches was “bordering on the offensive”.

“I’m prepared to withdraw, but I like the Honourable Steenhuisen to listen,” said Ramaphosa, adding later that the incessant heckling from DA benches had included commentary like, “You’re talking nonsense” and expletives.

“I’ve withdrawn that. Mr Steenhuisen, I should have said, ‘please keep quiet while I talk’.”

And with a smile it was back to the script, and the message.

If anything, Ramaphosa’s second presidential Q&A in the House has shown these are of a very different kind. There are no more easy victories for opposition parties. And with about a year to go to elections, unless the opposition steps up its game, the political show that these presidential question sessions are will come down firmly in favour of the ANC. DM