The quest for justice inside and outside Steinhoff’s AGM 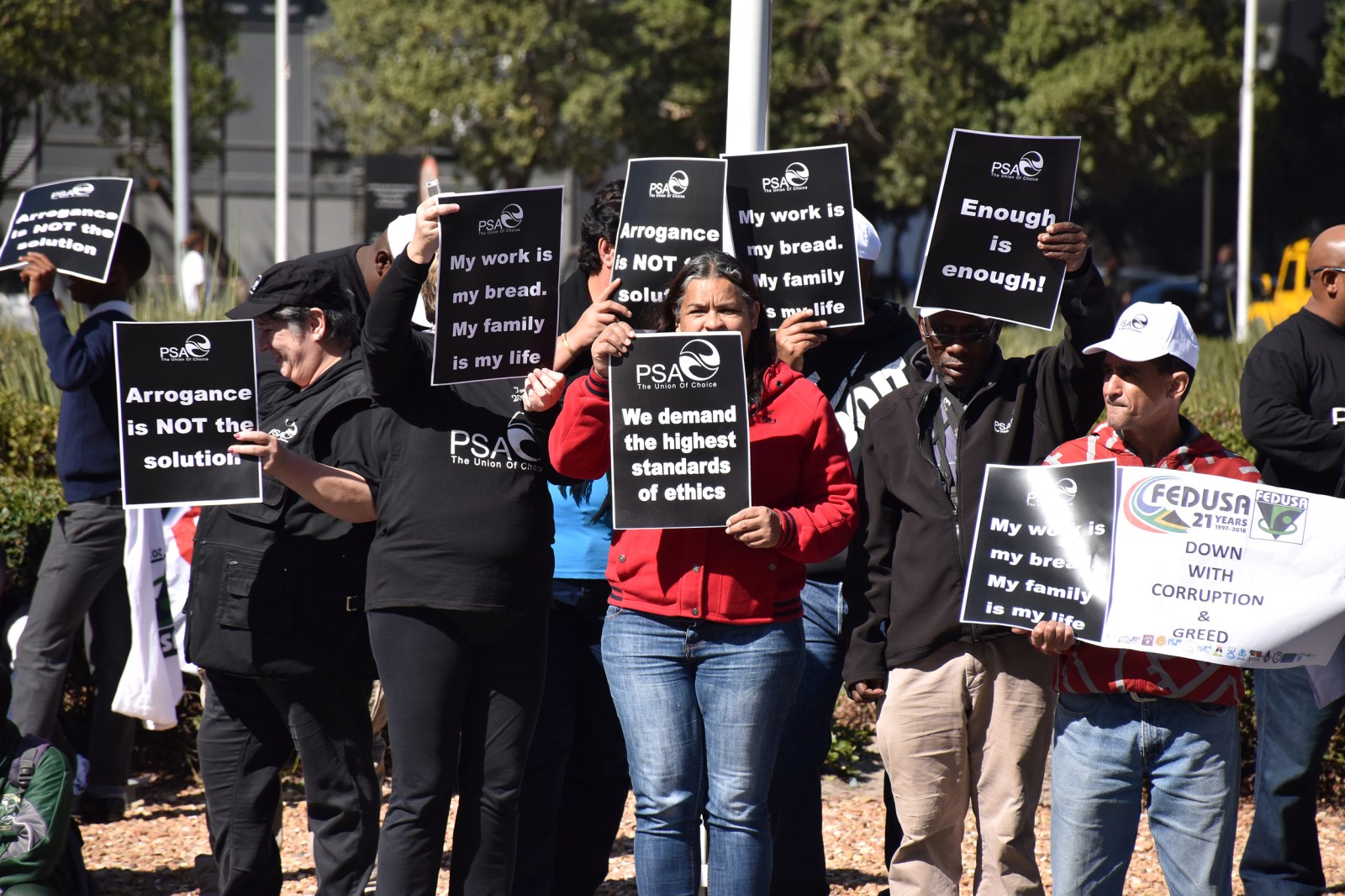 Protesters demonstrate their frustration with Steinhoff outside the venue where the AGM was held on Friday, April 20, 2018. Photo: Adam Yates

Outside the Cape Town International Convention Centre, a Fedusa-organised protest raged on the street. Inside, Steinhoff’s Annual General Meeting was live-streamed to 26 direct shareholders in a small conference room. Outside, anger transformed into song, chants, dance, and demands. Inside, frustration manifested itself in challenging questions, ironic laughter, and sighs of disapproval. But at the end of the day the Steinhoff board walked away with everything they wanted to achieve, the restructuring and revival of the organisation entirely in their hands.

On Friday morning, the impassioned singing of students echoed down the streets outside the Cape Town International Convention Centre.

Armed with T-shirts, protest signs, and a hatred for institutional corruption, the Congress of South African Students (Cosas) alongside representatives from the Federation of Union South Africa (Fedusa) and the Public Servants Association of South Africa (PSA), protested against Steinhoff International Holdings during the company’s Annual General Meeting.

The AGM was intended to give shareholders a platform to voice their concerns, provide transparency and insight into a criminal investigation that is under way, and allow shareholders to vote on a multitude of resolutions pertaining to the appointment of board members and the next steps forward in Steinhoff’s recovery.

The picketers demanded accountability. They wanted to see a total overhaul of board leadership in Steinhoff following the December discovery of “financial irregularities” that resulted in a 95% Steinhoff drop in the stock market.

As the sun beat down, and the songs swelled, Cosas members started a dance circle, raising their voices to declare, “Steinhoff we are coming for you.”

The protesters’ enthusiasm was palpable to all who passed by the traffic circle where the picket took place. Pedestrians inquired what they were protesting about (often, when told “Steinhoff,” the pedestrian gave a nod and a smile), and drivers speeding along hooted in agreement.

Explaining why he was on the street protesting, Michael Mayalo, chairperson of the Western Cape Province Congress of Cosas, said:

Mayalo points out that many of the protesters’ parents are working minimum wage jobs, and Steinhoff’s large-scale abuse of funds markedly impacts poor black families.

“What motivated us the most is that we need to support our parents … And we won’t rest until [Steinhoff] pays back the money that he looted. We won’t rest.”

For the protesters shouting out “Steinhoff”, the name is more than just that of the company’s founder, Bruno Steinhoff. Steinhoff is everything that is wrong with South African corruption. Steinhoff is racial inequality. Steinhoff is a foreigner taking advantage of poor communities. Steinhoff is greedy and inconsiderate. Steinhoff is unethical.

“That money is meant for our teachers,” said Cosas member Masibongwe Sihlahla.

“It is meant for our parents. So the fact that he thinks he can get away with looting the money of… our parents is not gonna happen… Every looter that is linked to Steinhoff must take accountability for the money that is lost.”

The students never mention the now-resigned Steinhoff CEO, Markus Jooste, by name. Jooste would be a reasonable target of their frustration. However, the conglomeration of all the responsible parties into a singular “Steinhoff” helps simplify the issue. Their anger is directed at one man, and therefore accountability and justice can be served easily.

Inside the Steinhoff AGM, justice was slightly more complicated.

The cheers, dancing, the hooting cars, anger, fiery protest, were all absent on the second floor of the Convention Centre. But the frustration was still there, the sense of having been cheated and wronged was present as well.

Shareholders and Steinhoff “guests” stood outside the conference room, eating finger sandwiches and drinking coffee, but their disgust for what transpired in December manifested through quiet whispers and heated anticipation of what might unfold during the AGM.

Soon the doors opened and the South African Steinhoff coalition took their seats. A teleconference stream to Amsterdam, where the meeting was actually held, began. Steinhoff, the company, now had the opportunity to present its defence.

“We understand and share the anger this has created,” opened Heather Sonn, the Steinhoff board member who chaired the AGM.

Despite the fact that Steinhoff is “severely constrained around ability to communicate due to legal advice” Sonn assured the audience that “good progress is being made” relative to the PwC investigation into Steinhoff.

After further introductory remarks, including a metaphor of comparing the Steinhoff collapse to “finding yourself in a burning building”, Sonn passed the microphone to other members of the Steinhoff board. Speakers gave updates on the organisation’s financial standing and restructuring plan, and provided (quite limited) information regarding the investigation into Steinhoff’s irregularities.

For the rest of the four-and-a-half hours a back-and-forth between frustrated shareholders and the Steinhoff board unfolded. Questions were fielded, mainly from the Amsterdam crowd. South Africans were given the opportunity to posit inquiries directly to the board but few accepted the offer.

The questions were rife with sarcasm, passive aggression, anger, and disappointment. Shareholders had put their trust, and more importantly their money, into an organisation that abused its power and responsibility. The shareholders at the meeting at least had the opportunity to voice their concerns. They had a seat at the table that those three storeys below were never given.

Steinhoff refused the Fedusa representatives leading the protest access to the meeting, claiming they were not direct shareholders.

Fedusa’s protest aimed to give voice to the voiceless – the Fedusa members who are direct shareholders but couldn’t afford the day off from work to attend the meeting themselves.

“You don’t want thousands of people to stay out of work and lose a day’s salary but you try to mobilise society,” explained Fedusa’s General Secretary, Dennis George.

Tahir Maepa, the Deputy General Manager of PSA, shared his thoughts on how Steinhoff can regain trust. Maepa believes that all who are involved should be replaced.

“It would be very irresponsible of the shareholders to allow the same guys to come back to serve in any board. No way these guys will turn around this institution, they are the ones that caused the collapse,” he said.

Central to this demand was the need to reject Steve Booysen’s appointment to the supervisory board. Booysen served as audit committee chairman during the scandal and Fedusa sees him as a responsible party for the massive financial damage suffered by Steinhoff shareholders. Booysen’s appointment was approved narrowly. He received 56.8% of the shareholders’ support, while 43.13% voted against his appointment.

“We want people to go to jail, we want people to lose their properties in order to make sure that we send a clear message to other corporates that this kind of behaviour – maladministration, bad corporate culture, unethical conduct – is never allowed to ever surface in this country ever again,” proclaimed Maepa on the street.

From behind a table in Amsterdam, Sonn assured those at the AGM that should any of the newly appointed or re-appointed board members be found responsible for the financial irregularities, in any way, during the PwC investigation of Steinhoff, they will resign immediately.

An honourable promise, perhaps, but probably insufficient for those who want a clear statement to be made. As one of the shareholders remarked to the board, “the jury is still out on if any of the nominees are a part of the problem or the solution”.

At the end of the day, the voices of the protesters, both outside and inside, did not make a difference. Every resolution proposed by Steinhoff, including each appointee for both the supervisory and advisory boards, passed. Most of the resolutions were passed with a significant majority of the shareholder votes, generally ranging from 80% to as high as 99% approval for the resolutions.

A question about the lack of diversity in board leadership (nearly every single appointee was a white male), and a legal technicality argument made to discredit the AGM, brought the meeting to a dramatic end. But no dramatic change was made. And now, only time will tell if, and to what extent, justice will be served for the responsible parties in Steinhoff’s collapse.

For the protesters, and especially the Cosas members outside, the events that transpired in the meeting do not necessarily take away from the civic engagement displayed by picketing.

George hoped the learners that came to protest would understand the necessity for good governance and ethical leadership, values he thinks have been absent in South Africa both politically and in the private sector for quite some time. When those values are ignored, George believes, one must take responsibility into their own hands.

For Mayalo at least, this lesson was learned.

When the energy began to die down at the rally and students started sitting and signs transformed from declarations of protest into shields from the sun, Mayalo, Mpotli, and Sihlahla still retained a sense of optimism.

Mayalo contemplated a day in which protests would no longer be needed.

“So, I might be the next president of the country, I will never want to initiate a country that is corrupt,” he reasoned.

“So that is why now we must fight corruption… We are the future.” DM