Community to have its day in court, but Mantashe warns of the impact on the economy 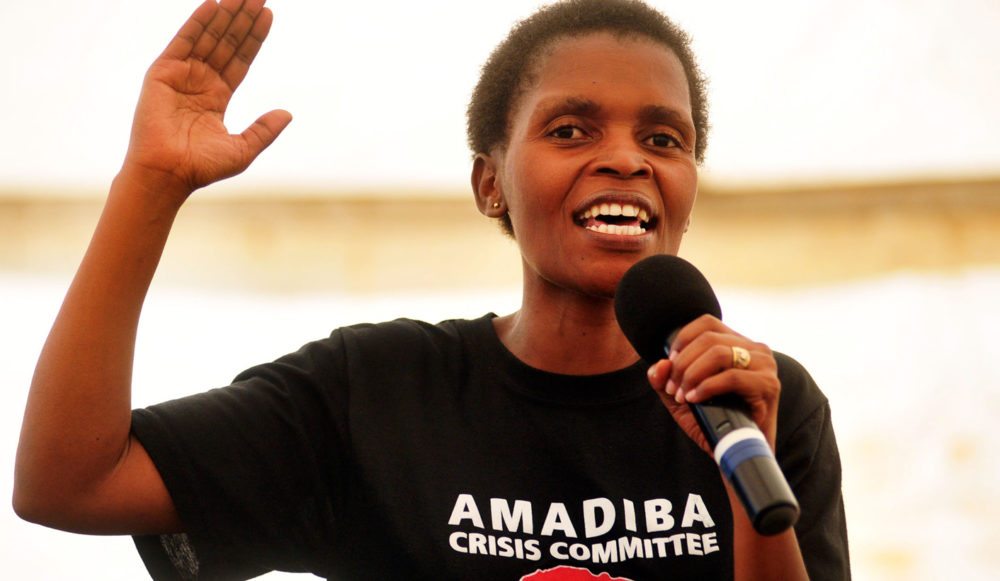 Nonhle Mbuthuma, one of the leaders of the Amadiba Crisis Comittee, says she is forced to live in hiding and move around with bodyguards because of threats to her life as a result of her opposition to plans to mine for titanium in the Xolobeni area near Mbizana in Eastern Cape. Photo: Lucas Ledwaba / Mukurukuru Media

The Wild Coast community of Xolobeni has long been fighting companies who want to mine the area for titanium. In court next week, they’ll argue that a mining licence should only be issued after communities give consent, rather than merely being consulted. Mining communities across the country should take notice.

Nonhle Mbuthuma’s family has lived on the same land for four generations. Community members in Xolobeni, on the Eastern Cape’s Wild Coast, sustain themselves through agriculture and fishing. They’re hoping to see an increase in tourism.

“The only thing that matters is land,” said Mbuthuma, spokesperson for the Amadiba Crisis Committee.

For more than 10 years the committee has resisted an Australian mining company’s attempts to open a titanium mine in Xolobeni and on Monday it heads to the North Gauteng High Court for a case that could determine not only the community’s future, but that of mining communities across the country.

The debate is over “consent” versus “consultation”. Under current South African law, mineral resources are owned by the government and a company that wants to open a mine is required to consult affected communities before they’re granted a mining licence.

Activists in Xolobeni, who claim they’ve faced severe intimidation and attacks for their resistance to Australia’s Mineral Resources Commodities (MRC), believe licences should only be issued after communities give their consent.

“Consultation is not enough because you just tell a person, ‘I’m coming to do this.’ You’re not asking permission… If we win this case it will save other communities that just sleep and see these companies in the morning,” said Mbuthuma.

The communal land in Xolobeni is occupied by members of the Umgungundlovu community, applicants in the case, and around 70 households could be displaced if mining proceeds. They argue they have strong economic and cultural links to the land and should have to give their consent before the government issues a licence and they’re moved.

MRC received a mining licence in 2008, which was overturned due to a lack of consultation, and its local subsidiary Transworld Energy and Mineral Resources (TEM) applied for another in 2015. The government imposed a moratorium on the issuing of mining rights in the area for 18 months due to conflict between those for and against mining. MRC has said it now believes the operation should be South African-owned, but it’s unclear whether it’s had any bidders.

The community has seen a string of violence in recent years, which activists allege is sponsored by MRC or its empowerment partner Xolco. MRC and Xolco have strenuously denied the claims. Amadiba Crisis Committee chairman Sikhosiphi “Bazooka” Rhadebe was murdered two years ago and no one has been charged.

“The court ruling will have implications for all mining-affected communities. This would potentially set a historic precedent as it would place the voices and needs of those most affected at the centre of decision-making about mining activities,” said a statement from those going to court and organisations supporting them and their efforts to resist big business on Wednesday.

“The applicants do not seek much,” reads their heads of argument.

“They seek only the recognition of their right to decide whether or not their ancestral land will be fundamentally altered by mining, and if so how they will be compensated. The Constitution requires nothing less.”

“Their way of life is intrinsically linked to the land. Customary communities tend to suffer disproportionately from the impacts of mining as they are directly affected by the environmental pollution, air borne diseases, loss of their farm land and grazing land, forced displacement and the loss of community amongst other things. Without free, prior and informed consent, they are at real risk of losing not only rights in their land, but their very way of being.”

Mineral Resources Minister Gwede Mantashe’s office has warned that the case could disrupt the country’s efforts to transform the economy. The government will argue that the state owns all mineral resources and can issue mining licences if communities are consulted.

“Landowners, communities and interested and affected persons only have a right to be consulted,” read the court papers.

“We submit that the state’s commitment to benefit the South African people through access to mining rights will be foiled if made subject to the whims of communities with informal land rights.”

The state says mineral resources are vital to the South African economy and its transformative agenda. If consent was required from landowners to issue mining licences, as it was under previous legislation, people could delay mining in an area until it benefits them most, which would limit the country’s economic growth.

She said mining in the area, expected to last around 20 years, will damage the land and the activists prefer to focus on developing their community through agriculture and tourism.

In its papers, TEM said many people across the world would prefer mining not to come to their communities, but South African legislation does not require their consent and they have no power to veto a licence granted by government.

“The application has wide implications. If granted, it will affect land and mining rights all over the country.”

It accused the community members of trying to take a “short cut” to receive special protection.

The court case depends on the law’s treatment of customary land. The applicants claim that while legislation says land can be taken from common law owners for mining, it doesn’t say the same for customary land, because residents in such areas deserve heightened protection due to past dispossession. The state and TEM says all land owners can be dispossessed, and then compensated, for mining.

A petition has been launched to support the efforts to resist mining in Xolobeni and dozens of local and international civil society organisations support the community.

Despite the moratorium on mining in Xolobeni and MRC saying it wants out, Mbuthuma feared the company, or another, would return. If they lose the case, the Amadiba Crisis Committee plans to fight, just as they have for over 10 years. DM