Is the problem with the law or the implementation of the law? 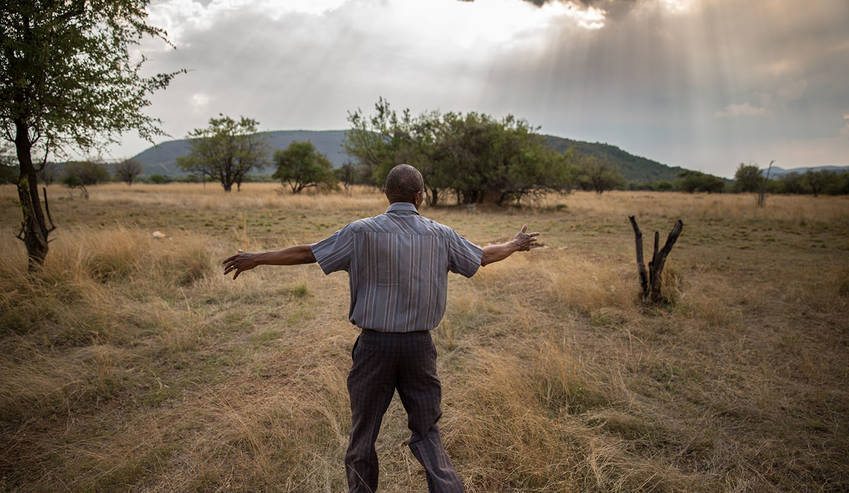 Photo: Villages surrounding the Pilanesberg Platinum mine in the North West in South Africa have severe unemployment, lack of basic infrastructure and are without running water, despite being on one of the riches reserves of platinum in the World. The owners and tribal chief in the area are accused of stealing over R25 billion that was supposed to be spent on developing the surrounding area. Photo: Daniel Born

A number of land reform policies have been passed over the years, and it seems the missing step might just be their implementation. Several discussions held recently on land expropriation kicked off the debate at the very heart of the land dispute saga: a defence of the Constitution over its frightening and eventual amendment.

Ever since Parliament decided to look into ways to expropriate land in South Africa, especially without any form of compensation, civil society organisations, government and a host of public institutions have been hosting debates and talks on whether it is even necessary to amend the Constitution at all in the pursuit of land reform.

The South African Human Rights Commission last month invited submissions from civil society on the Impact of Rural Land Use and Ownership Patterns in South Africa. The hearing saw the Legal Resources Centre, Nkuzi Development Association, and the Foundation for Human Rights make oral submissions before the panel.

Ruth Hall, a panellist and professor at The University of the Western Cape, concluded:

“So far we haven’t heard that the Constitution is a problem in terms of advancing land reform, rather we have been hearing a lot about the opportunities to secure rights to land, and those opportunities have been squandered, which raises questions about political will and whether we have the kind of institutions that can drive the process.”

Nkuzi Development Association, a Section 21 organisation created to help rural communities access and assert their land rights, spoke about how land restitution cases have not been followed through by the Limpopo provincial government at the detriment of the people involved.

The Popelo community’s drawn out case in their fight to access land was submitted as a case study of how the poor implementation of already existing laws for land reform is the cause for continued inequality in the area.

In 2007, the Constitutional Court ruled in favour of the community’s claim to the Boomplaats farm in GaSekgopo near Tzaneen, in Limpopo.

According to Motlanalo Lebepe, director of Nkuzi Development Association, the Limpopo provincial land claims, in accordance to the “willing buyer, willing seller” policy, has since paid 90% of the of the agreed amount to the farmer whose land is being expropriated.

This, however, was done only two years ago, nine years since the deal was made in 2007.

However, the previous farm owner still uses the land and extracts water from it while the community has no access to the land.

Lebepe explained that this was because, despite having paid for it, the provincial government was not doing anything further to take possession of the farm.

“At the moment land reform is not even slow, it is not happening,” said Lebepe.

The debate on land expropriation has revealed cases where the current laws that permit expropriation have not been tried and tested, but mostly been “strangled by bureaucracy”.

Lepede cited a case involving a family of 14 farm dwellers who were illegally evicted from a farm in Waterval, in the Elim area in Limpopo. The family was then dumped in the neighbouring town without proper alternative accommodation.

This has created animosity between the community and the evicted family, as the community hall they are now staying in was meant to be for public use, not housing.

“There is no privacy as the family includes the elderly, men, women and children,” said Lepebe.

According to Hanif Vally, Deputy Director of the Foundation of Human Rights, what compounds the issue, is that no one has ever been convicted of an illegal eviction.

Farmers often breach the Extension of Security of Tenure Act (ESTA) that ensures farm dwellers rights to reside in a farm. This act, says Vally, prohibits farmers from evicting workers from the farm if they have been living there for more than 10 years or those who have reached the age of 60 and those unable to work due to ill-health, disability or injury.

The Foundation for Human Rights was dismayed at the failure of the 50/50 policy (formerly titled the Strengthening the Relative Rights of People Working the Land policy) aimed at accelerating land reform. Under this policy, first passed in the Western Cape, the farmers would only own half of the farm.

This would allow farm workers to have access to land on an equitable basis and secure collateral capital through the issuing of title deeds and certification of formal land tenure.

However, although this might have been a step in the right direction, the policy has not been implemented.

Another policy seen as a failure was the “One Household, One Hectare” policy published by the Department of Rural Development and Land Reform, where one hectare of land would be allocated to every household in need.

Through this, households would be encouraged to participate in the economy and open market and further alleviate poverty through redistribution.

However, according to Wilmien Wicomb, an attorney with the Legal Resource Centre, rural land ownership is still understood through customary law, where traditional leaders are custodians of the communal land.

“Our understanding of ownership is inherited from the (aparthied) transition,” said Wicomb.

Wicomb cited the Bakgatla Ba Kgafela case in the North West as an example of a deeply unjust land ownership dispute.

The Mothlabe community, with a population of 3,000 residents, sits under a rich deposit of platinum, however, they do not benefit from this mineral resource nor were they a part of the sale of the land to a private company for mining.

“When the chief decides to dispose of land and farms belonging to the community, he holds a meeting with about 100 followers and a government department representative, then he signs the legislation alone. The community is stripped of the land and the mining company pays large fees (to the Chief) to lease or buy it,” said Wicomb.

Since the ANC ‘s December conference policy on land and Parliament’s vote to expropriate land without compensation, the report on the Assessment of Key Legislation of Fundamental Change published by the High-Level Panel, a forum led by former president Kgalema Motlanthe, has been widely cited.

The panel reviewed more than a 1,000 pieces of legislation by government since 1994 and recommended reviews to some of the policies and even a repeal of others.

Amongst those recommended to be either amended or repealed is the Ingonyama Trust – an entity formed to administer land which is traditionally owned by the Zulu people in KwaZulu-Natal.

The land under the stewardship of the traditional leaders gives them autonomy to decide what happens to it without consultation with their subjects. The recommendations in this report then would have this land removed under their care and placed under the government.

This has caused a stir between traditional chiefs and the government, with the chief threatening to take legal action if the land is taken from them. This raises the question of who really owns the land held by the Ingonyama trust?

“This is a crucial blind spot on the debate of expropriation of land,” said Wicomb.

According to Dr Shanelle Van der Berg, another panellist at the hearing, people in rural areas are suffering, and they don’t have access to basic socio-economic services or development projects.

“It is very important to tap into the constitutional provision in section 25 which makes provision for government to take reasonable legislative and other measures to foster equitable access to land,” said Van der Berg.

The National Forum for Dialogue on Land, Heritage and Human Rights, at the request of the Parliamentary Constitutional Review Committee, was also convened concurrently with the SAHRC dialogue to discuss this issue of land.

And the major theme to come out of the two-day forum was whether amending the Constitution is necessary in expropriating land now that there is political will on land reform.

The Minister of Land Reform, Maite Nkoana-Mashabane intimated that her department is already involved in land reform initiatives ahead of Parliament’s findings on ways to expropriate land without compensation.

Jeremy Cronin, Deputy Minister of Public Works, cautioned government of the limitations in its ability to expropriate land without compensation.

He argues that there should only be no compensation in certain circumstances, such as where the land is abandoned or unused, as well as where the tenants live on the land they farm but do not have title deeds.

On 4 April, SERI (the Socio-Economic Rights Institute) made submissions in Parliament to the Joint Committee on Constitutional Review about expropriation as “a policy tool for the implementation of land reform”.

The report highlights the potential the state has through expropriation by “unlocking speculatively held or abandoned land” and how this can “enable the state to acquire vacant land and buildings which could then be used for the provision of permanent housing”.

However, according to SERI, the state can employ, under the already existing laws, instruments at its disposal in its pursuit of meaningful land reform.

“Only once those efforts have been tested and found wanting will it be possible to consider whether constitutional and statutory amendments are necessary or desirable,” said SERI in a statement. DM

Photo: Villages surrounding the Pilanesberg Platinum mine in North West in South Africa have severe unemployment, lack of basic infrastructure and are without running water, despite being on one of the riches reserves of platinum in the World. The owners and tribal chief in the area are accused of stealing over R25bn that was supposed to be spent on developing the surrounding area. Photo: Daniel Born