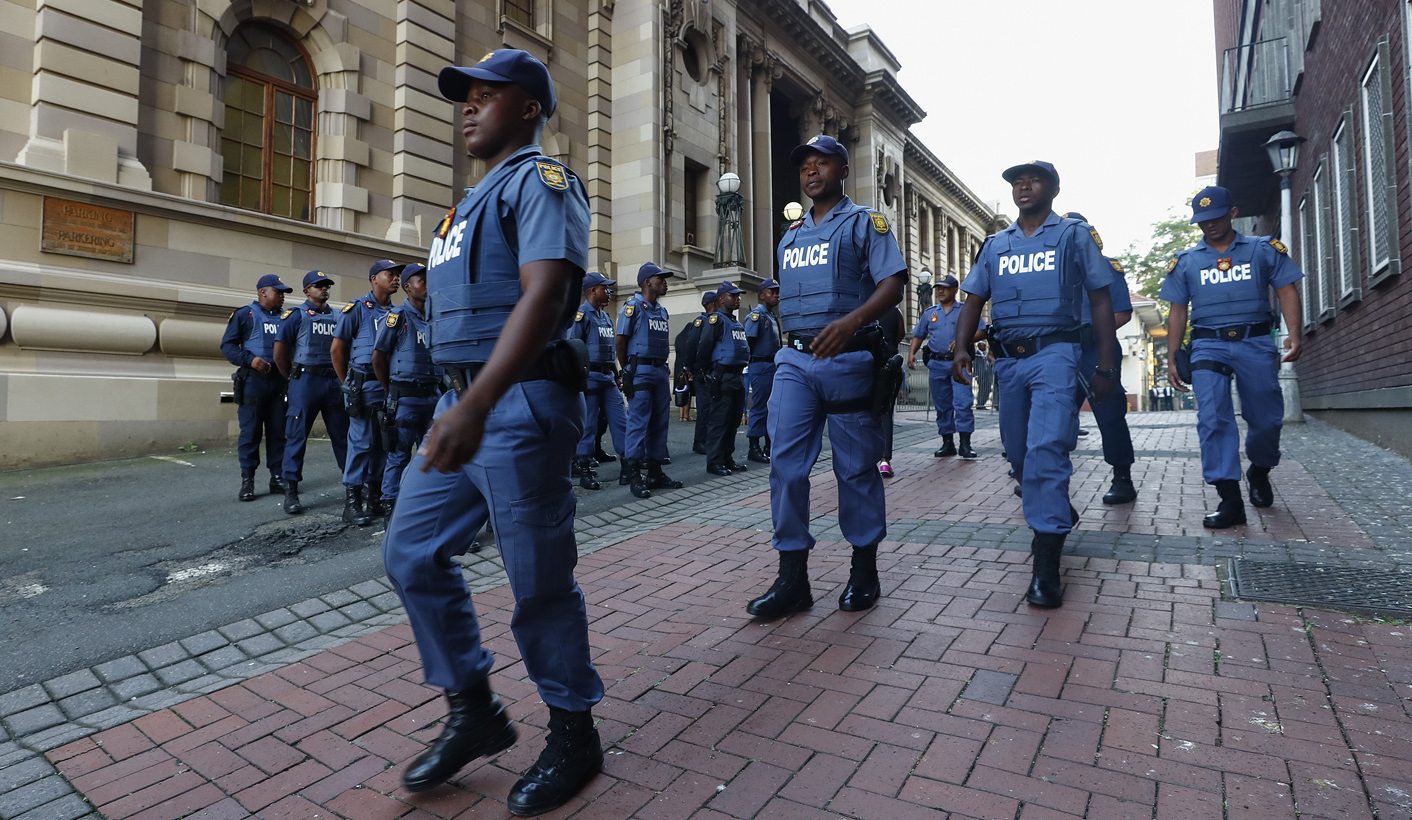 Tough talk comes easy to the SAPS on fighting crime, and a critical element of this includes “stamping the authority of the state” on crime and those who perpetrate it. But a look at how the police service aims to fulfil its constitutional mandate to keep South Africans safe and secure shows declining performance targets for detecting and preventing crimes. And the SAPS 2018/19 performance plan is silent on how it plans to fix its current information technology systems debacle, which saw key services switched off following failure to pay the outsourced contractor.

It’s that time of the year again. Parliament’s committees plough through departmental annual performance and strategic plans that are meant to set the direction and achievement indicators for the year ahead. It’s part of the Budget oversight process crammed this year into about two weeks ahead of the budget votes debates from early May leading up to Parliament passing the national Budget at the end of that month.

But what’s reflected in many of those departmental annual performance and strategic plans often is disconnected from the reality of governance, policy implementation and financial planning. And the SAPS 2018/19 annual performance plan is a good example of this disjuncture.

The controversy over the SAPS outsourced information and communication technology (ITC) contract for property control and exhibit management, effectively a track-and-trace system, and the firearms permit system, affecting forensics and all of SAPS business areas respectively, simply doesn’t feature in its performance plan. According to that document tabled in Parliament, it’s all A-okay – the box headed “maintenance” is ticked.

But the dispute between Forensic Data Analysts (FDA), SAPS and the government-owned State Information Technology Agency (SITA) has escalated into a shutdown from a war words in which the contracted FDA publicly said it had not received payments since November 2017.

“We can confirm that certain systems have indeed been shut down and while the shutting down of the said systems is likely to affect the efficiency of certain operations within the SAPS, they however do not completely bring operations to a halt,” said the police and SITA, adding that legal advice is being sought.

“We will not be giving out specifics given that there are serious security implications and that we may potentially need to act on the legal advice if necessary.”

When the SAPS top management appears before Parliament on Tuesday, the generals may want to try to argue that the issue could not be included in the performance plan because the shutdown happened just last week.

That would be disingenuous. The matter has been coming since late 2017, when Parliament’s watchdog on public spending, the Standing Committee on Public Accounts (Scopa), heard of dodgy dealings in this R5.1-billion contract.

Recalling that hearing in the wake of last week’s switch-off, Scopa chairperson Themba Godi said MPs were “wondering what kind of contracts were entered into with FDA because this arrangement is a betrayal of the national interest.

“The committee believes that this matter should be attended to expeditiously if SAPS and government are serious about national security.”

In that statement Godi restated Scopa’s call then for a stop to payments, given officials had raised concerns over the contract’s legality.

“Scopa then said if there is illegality, the officials should not pay. Scopa did not just make the call in a vacuum, the call was informed by the concerns from the officials.”

With Scopa set to scrutinise this matter, police committee chairperson Francois Beukman also announced last week that a special briefing on the SAPS, SITA and the FDA contract was scheduled for June. But first, next week’s Budget-related briefing on the annual performance and strategic plans.

The mess over the ITC contacts has budgetary implications.

“The committee is very worried about the state of contract management in the SAPS,” Beukman told Daily Maverick.

“We want clear assurances from the national police commissioner (Lieutenant General Khehla Sitole) this will be resolved.”

But MPs face further pickles. The SAPS’s 2018/19 annual performance targets are dropping, or at best remain static, on the back of declining achievements over recent years.

This reaches across the board.

The detective service’s performance target in detecting serious crime is set at 37% for the 2018/19 financial year, the same performance as the prior year. It’s marginally up from the actual detection rate of 36.22% in the 2016/17 financial year, when detectives investigated suspects in 781,830 of 2,158,281 reported crimes.

The SAPS targets for its visible policing programme to reduce reported serious crime by 2% to 1,651,436 cases raise questions: is the target of having less crime reported linked to better crime prevention, or simply refusal to open dockets? That’s not far-fetched as reports of police stations either refusing to open dockets, or opening dockets for a lesser crime – sexual assault instead of rape, or assault instead of attempted murder – are not unknown, even in official oversight structures.

It’s unclear exactly what is meant by this, but it involves the specialised National Intervention Unit and the Special Task Force which in 2016/17 responded to 2,420 such incidents of a security nature not deemed to be normal crime. There are no numbers given for the 2017/18 financial year; the performance plan simply states the estimated performance of that year as “100%”.

In these days of State Capture, the SAPS’s planned target for the Hawks to address “serious corruption where officials are involved in procurement, fraud and corruption cases” is set at 60%. That’s less than the 70.96% achieved in the 2014/15 financial year and the 79.85% and 79.47% reached in the subsequent two years. But as always the devil is in the detail: while in the 2014/15 financial year the percentage turned out to be 1,215 cases from 1,172, the number of actual cases dealt with dropped to 444 of 556 and 511 of 643 in the two subsequent years.

Ditto the Hawks’ performance targets in what the annual performance plan calls “specialised investigations of serious commercial crime-related charges”. The target is set at 53% for the 2018/19 financial year, like the previous year, which again is significantly lower than the 66.43% achieved in the 2016/17 financial year when 2,750 trial-ready dockets emerged from 4,140 cases.

The performance targets for SAPS crime intelligence are mostly vague, with most presented as new indicators. It remains unclear why the SAPS now has a target of producing four “global threat assessment reports… for SAPS operations” given that its constitutional mandate set out in Section 205 of the Constitution is “to prevent, combat and investigate crime, to maintain public order, to protect and secure the inhabitants of the Republic and their property, and to uphold and enforce the law”.

Yet crime intelligence, long touted in the official rhetoric as central to intelligence-driven proactive crime fighting, is flailing in producing the reports, including early warnings and threat assessments, for such proactive policing.

According to the 2018/19 annual performance plan, it must produce 14,480 such reports, the same as the previous year. Yet that is half of what was actually produced in the 2016/17 financial year, when the actual audited performance shows 28,022 such reports.

It’s a grim picture all round. DM