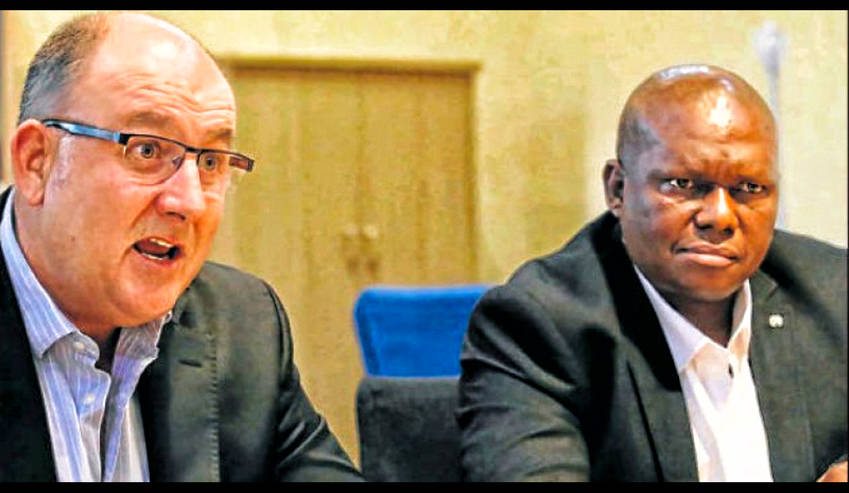 A no-confidence vote in Nelson Mandela Bay Mayor Athol Trollip scheduled for Thursday did not get off the ground. Council Speaker Jonathan Lawack took the decision to adjourn the special council proceedings indefinitely on the grounds that disruption from opposition councillors made it impossible to proceed. The meeting was marked by conflict from the start. By REBECCA DAVIS.

Did anyone really want the vote of no confidence in Nelson Mandela Bay mayor Athol Trollip to go ahead?

Judging by events on Thursday in the Nelson Mandela Bay council, there was considerable uncertainty across the political spectrum about how the cards would fall if the vote was undertaken.

Before the meeting, the votes for and against Trollip were said to be locked evenly. The ANC and United Democratic Front (UDM) were set to back the EFF’s motion to remove Trollip, while a last-minute pact between the DA and Gayton Mckenzie’s Patriotic Alliance would support Trollip retaining his mayoral seat.

It looked likely that the vote would come down to the wire, with 61 votes required to form a majority in the council of 120.

In the event of votes being tied even, the deciding vote would be cast by Council Speaker Jonathan Lawack from the DA. As a result, the Speaker’s role took on heightened significance in the events of the morning.

Opposition councillors – from the EFF, ANC and UDM – argued when the meeting began that the first order of business should be another motion of no confidence in Speaker Lawack, who they claimed was not fit for purpose.

This was just one of a number of technical squabbles which kicked off the day. Also in dispute was whether the vote on Trollip’s fate should take place via secret ballot, and whether DA leader Mmusi Maimane should be permitted to sit close to the action in the public gallery – against the wishes of opposition councillors.

Maimane would later tell eNCA that he was simply there in his capacity as a “concerned citizen” who wanted to see the council meeting proceed.

Amid a failure to reach consensus on the order of the agenda, and upon Lawack’s refusal to grant opposition councillors a 20-minute break to caucus, the EFF, UDM and ANC walked out – depriving the meeting of a quorum. Matters threatened to turn violent when a scuffle broke out between a DA and an EFF councillor during the break, with Maimane reportedly attempting to intervene to defuse the situation.

When the council meeting commenced one more, it was in surreal style. Port Elizabeth Pastor Jimmy Crompton was invited by the Speaker to address the council – apparently in the hope that some stern Christian words might sort out the bad behaviour.

Crompton proceeded to deliver a sermon, reminding councillors that “Nelson Mandela Bay council belongs to God”, during which the principle of separating church and state slowly perished on the lectern.

Crompton would later remove himself from the chamber under duress, after earning the displeasure of EFF councillors.

Lawack was determined to turn to the ordinary business of the council, but opposition councillors were having none of it.

“We see that the DA wants to collapse this meeting because they are going today,” the UDM’s Bongameli Bobani charged.

The PA’s Marlon Daniels, meanwhile, told opposition councillors that the vote of no confidence ship had sailed.

“An opportunity was presented this morning,” Daniels said. “If they wanted the opportunity for the white throat to be slit so that red blood could come out…” He was unable to finish paraphrasing EFF leader Julius Malema’s warning that the Fighters intended to remove Trollip to “slit the throat of whiteness” due to heckles.

ANC elections chair Fikile Mbalula watched proceedings from the gallery for a short while before leaving again.

Lawack was adamant that he had adjourned the special council meeting – in other words, the vote of no confidence – indefinitely, applying rule 28.11. That regulation allows the Speaker to adjourn a session “in the event of grave disorder”.

Said Lawack: “I will notify you when that special meeting will take place.”

Lawack’s attempts to press on with other council business were in vain, however, as opposition councillors continued to disrupt the meeting. Another adjournment followed, after which a multi-party whips meeting incorporating the Speaker took place behind closed doors in an attempt to thrash out differences.

At time of writing, the council was adjourned for lunch.

Outside the chamber, meanwhile, a rare show of unity between the EFF and the ANC was on display, as supporters of both parties sang and protested together under the watchful eye of a heavy police presence.

There is as yet no indication when the vote of no confidence in Mayor Trollip may proceed.

Amid all the drama, it was easy to forget that the council has other critical matters on the agenda. If the Nelson Mandela Bay Council does not pass its already delayed adjustment budget by 31 March, a number of key infrastructure projects will be affected and some staff will not be paid. The budget has previously been rejected by the opposition on the basis that it was anti-poor. DM