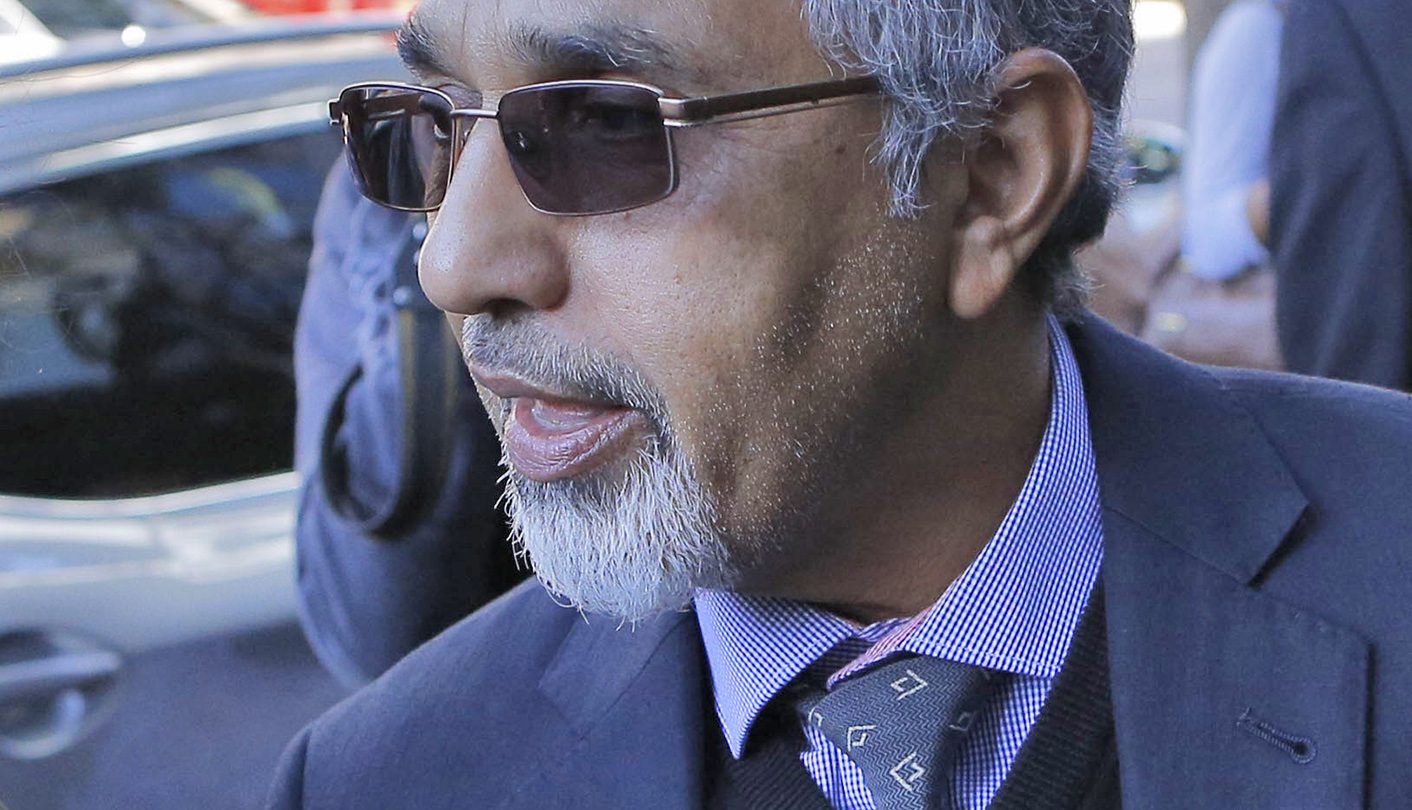 The Priority Crimes Litigation Unit, which has been abused as a key structure within the NPA to target perceived enemies of former President Jacob Zuma and the State Capture project, is behind the recent charging of former deputy SARS Commissioner Ivan Pillay and colleagues Johann van Loggerenberg and Andries Janse van Rensburg under a recycled case number that was last used to unsuccessfully persecute Pravin Gordhan in 2016. The unit, under Dr Torie Pretorius, has targeted an impressive list of corruption busters including Johan Booysen, Shadrack Sibiya, Anwa Dramat, Robert McBride, Paul O’Sullivan, Pravin Gordhan and Glynis Breytenbach. The ghosts of the Zuma era are yet to be exorcised. By MARIANNE THAMM.

It is baffling that the NPA, particularly in such a high-profile case that will once again attract both national and international media attention, should opt not to set the record straight or comment about allegations pertaining to its key prosecutor in the matter.

But these are are times when the cold hand of State Capture still grips many by the throat. There is just too much at stake.

On 9 March, Pillay, Van Loggerenberg and Janse van Rensburg were served with a J175, a summons to appear in the Pretoria regional court on 9 April on charges relating to “Project Sunday Evenings”, an allegedly clandestine 2007 operation by SARS and its “rogue unit” to bug the offices of the NPA.

The recycling of Brooklyn case number 427/05/15 – used also by disgraced former Hawks head, Berning Ntlemeza, to persecute Pravin Gordhan (charges were, embarrassingly for the NPA, later withdrawn) – occurred at more or less the same time Pillay was rumoured to be heading back to SARS to mop up Commissioner Tom Moyane’s mess there.

Pillay’s imminent return would be a direct and mortal threat to the rogue’s gallery of prominent names in the political, organised crime and business realm – many of them tax evaders – and many of whom have no compunction about using whatever means possible to escape arrest and evade justice.

The revenue service, under Moyane’s watch, is a shadow of its former self, so much so that President Cyril Ramaphosa has ordered the establishment of a commission of inquiry. It was Moyane who lodged case 427/05/15 at 17:00 on 16 May 2015 at the Brooklyn Pretoria SAPS. The CAS number was fed into the system at 19:15 that night. Ever since, it has been the ghost in the machine, a roving target, a blunt instrument and a convenient hook used to hound Gordhan and now again the senior former SARS executives.

The man who will be prosecuting Pillay, Van Loggerenberg and Janse Van Rensburg is Advocate Sello Maema, a man who former KZN Hawks head Johan Booysen has described as “a gentleman with a good track record” but who has “gone rogue at the behest of Jiba (former Deputy NDPP Nomgcobo Jiba).”

Booysen, who is rumoured to be making a comeback soon as a special adviser to recently appointed Minister of Police Bheki Cele, wrote in December 2017 that is “an open secret that Maema” as well as other prosecutors in what he describes as a “cabal” in the NPA had been promised promotions (which end up being rather fun retirement packages when the time comes).

“Everyone knows that Jiba has the ear of Jeff Radebe, then Minister of Justice and now Minister of the Presidency. In fact she (Jiba) was Radebe’s preferred candidate for the NDPP job,” wrote Booysen.

Booysen said Advocate Maema had perjured himself on two occasions in court papers.

“He lied under oath in the GCB v Jiba and in Booysen and others v the NDPP. He misrepresented evidence and lied in a memo when he and Noko (Advocate Moipone Noko, the KZN Hawks boss, will be leading Jacob Zuma’s prosecution – Ed) persuaded Abrahams to prosecute me for racketeering. Maema also controversially removed advocates Gerrie Nel and Andrea Johnson from the prosecution team in the Brett Kebble matter,” said Booysen.

Over and above this, Maema had also removed Gerrie Nel from the case in the prosecution of Crime Intelligence boss Mulangi Mphego who had links with Selebi.

And while Booysen said he had lodged criminal charges with the Hawks against Maema for perjury, Daily Maverick’s questions to the DPCI spokesperson Brigadier Hangwani Mulaudzi with regard to progress in the case were ignored.

So too were our questions to NPA spokesperson Advocate Luvuyo Mfaku with regard to Booysen’s claims that Maema had perjured himself. Maema referred Daily Maverick’s questions back to Mfaku whom he copied in on his email to us.

Another question the NPA did not answer was whether the prosecution would be relying on the discredited SARS KPMG “rogue unit” report to build a case against Pillay, Van Loggerenberg and Janse Van Rensburg, considering KMPG International has withdrawn the recommendations and findings as well as returned the R23-million SARS had paid for it.

Daily Maverick asked Advocate Maema and Advocate Mfaku whether they were aware that in 2007 Van Loggerenberg did not head the unit accused of spying in the “Sunday Evenings” matter. Also, legal representatives for Pillay and Van Loggerenberg, had stated that at no point in the process of taking warning statements were either men questioned on any allegations or facts that related to the latest charges.

There was no reply either as to who it was that instructed the reopening of the case and whether it was not irregular to recycle a case number, tailoring it each time to new charges and new suspects.

The case number 427/05/15 used to institute charges against Gordhan, Pillay and former SARS Commissioner Oupa Magashula in 2017 (the charges were later withdrawn by Shaun Abrahams when the exculpatory “Vlok Symmington memorandum” surfaced).

On Friday, Abrahams, presenting to Scopa, told the committee that he had not had anything to do with the instruction to recharge the three SARS executives.

“This decision was made by the Special Director of the Priority Crimes Investigations Unit in consultation with the Acting Director of Public Prosecutions of Pretoria. I am briefed on matters. I’m briefed on all high-profile matters‚ but I didn’t make a decision in respect of this matter,” said Abrahams.

The Priority Crimes Litigation Unit was established by a Presidential Proclamation in 2003 in line with the Rome Statute of the International Criminal Court. Its main function is to manage and direct investigations into serious crimes including genocide, crimes against humanity, war crimes as well as crimes against the state including national and international terrorism.

In 2015, shortly after his appointment, Abrahams dropped all charges against Zuma loyalist Jiba before she was promoted to Deputy NDPP – a new position which in effect rendered her the most powerful prosecutor in the NPA other than Abrahams.

In 2016 Jiba and Advocate Lawrence Mwrebi, head of the specialised Commericial Crimes Unit, were struck off the roll of advocates because of their conduct in a decision to drop charges against former Crime Intelligence head, Richard Mdluli, as well as their decision to illegally prosecute Booysen.

Zuma’s apparent control of the NPA, first through Jiba and then Abrahams, was to see the NPA and the PCLU used as key structures in striking out at corruption busters in the NPA, the DPCI and SAPS.

IPID director McBride, director of investigations Matthew Sesoko, and former head of Ipid in Limpopo, Innocent Khuba, have been investigated by the DPCI’s Crimes Against the State (Cats) unit for fraud and defeating the ends of justice.

After charges against McBride and his co-accused were dropped, he remarked that he had been concerned that Maema had been allowed to prosecute him.

“The decision to remove him lies squarely with the National Director of Public Prosecutions. All I am saying is that based on the evidence that I have seen, it involves dishonesty and lack of integrity and that is of great concern to me,” said McBride.

Without the PCLU, prosecutorial decisions would have to be taken by various Directors of Public Prosecutions and, remarked O’Sullivan, it would have been unlikely that “the Hawks and/or Abrahams would have been able to obtain buy-in from so many compliant prosecutors”.

It is unlikely that Maema will rely on the totally discredited KPMG report to charge Pillay, Van Loggerenberg and Janse Van Rensburg, and it is believed the case will be built around evidence from former revenue staffers Helgaard Lombard and Mike Peega, a disgruntled former special forces soldier and undercover SARS agent who was arrested for rhino poaching and who penned a “dossier” claiming SARS targeted “Zuma sympathisers” after Polokwane.