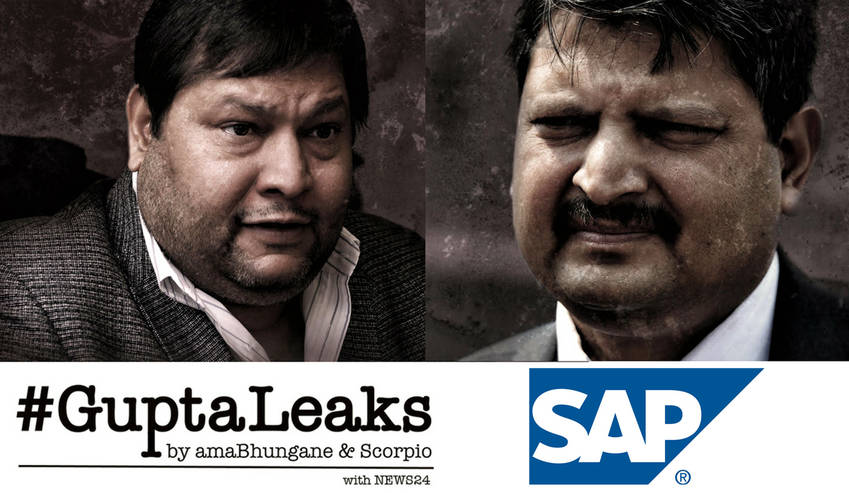 “We have question marks,” says Philipp Klarmann, the man in charge of investigations and anti-corruption at SAP.

The multinational IT giant released the findings of the investigation by law firm Baker McKenzie into allegations that SAP paid more than R100-million in kickbacks to Gupta-owned companies in order to secure six deals with Transnet and Eskom.

Klarmann joined Adaire Fox-Martin, the SAP executive board member in charge of the investigation, in a conference call with amaBhungane earlier on Thursday.

Although SAP said it found “no evidence of payments to Eskom or Transnet employees or to any government officials in South Africa”, both Fox-Martin and Klarmann conceded that they have been left with many suspicions and unanswered questions about how three minor IT companies with connections to the Guptas – Global Softech Solutions (GSS), CAD House and Lejara – became major deal makers on contracts SAP scored with state owned entities.

“There were absolutely irregularities in the management of third parties” – that is, Gupta companies acting as sales agents – “and to the adherence of compliance to SAP’s processes in South Africa,” Fox-Martin confirmed.

One of the big questions, for instance, is whether executives in South Africa disclosed the political connections of their newly-signed “sales agents”, who stood to earn between 10 and 14.9% of the value of every deal they facilitated.

“We are surprised that given the prominence of the Guptas in South Africa, and maybe the surroundings and rumours, we are a bit surprised that SAP leaders are meeting with representatives of the Guptas and are not telling (that these companies are associated with the Guptas),” Klarmann said.

“It happened but not in the correct manner and also not at the correct time we believe. Even in some of the companies it was not told at all.”

The hidden hand of the Guptas

Another unanswered question is what the Gupta-controlled companies did in order to secure the contracts with state owned entities. In the case of CAD House, for instance, its tasks included to meet with and lobby Transnet chief financial officer Garry Pita ahead of a crucial decision on whether Transnet should sign a R114-million IT contract.

In order to get paid, companies like CAD House and GSS were required to provide SAP with a “complete and accurate description of the work done”.

On the alleged meeting with Pita – which Pita denies – Klarmann said: “We could not establish that.”

Questions also remain about how Gupta-linked companies were selected as so-called supplier development partners, putting them in line for multi-million rand contracts with Transnet.

In 2016, amaBhungane reported on a failed bid by SAP to secure a R800-million deal with Transnet. The Lead2Cash project would have involved sub-contracting 60% of the project to a little-known Gupta-owned company, GSS, as its supplier development partner.

Had the deal gone through, GSS would have received roughly R500-million.

But did GSS, whose total revenue for the previous year was R53-million, have the skills to do the job?

“These executives categorically received no severance from SAP,” Fox-Martin said.

However, amaBhungane understands at least one of the executives had received an annual bonus equal to about six months’ income. Asked about this, Fox-Martin said: “We have an obligation to pay what is due and that is the minimum that we paid.”

“There are legal limitations to what you can do and we had to do it,” Klarmann added.

SAP is entitled to conduct an audit of the companies it signs as sales agents if it suspects that commissions were on-paid to government officials or politicians. Although SAP’s release states that no such payments were made, SAP also conceded that the audits of these companies were still ongoing.

“(F)rom what we have seen in the audit already we have not seen any such payment,” Klarmann said.

“(T)here are limitations to what we as SAP can achieve in a complex investigation without having the investigative power of government authorities,” Fox-Martin said.

Also still ongoing is SAP’s investigation into other public sector contracts, including a lucrative contract it received from the department of water and sanitation.

In February last year, the Economic Freedom Fighters (EFF) published whistle-blower allegations that at least R35-million in kickbacks was paid to secure this contract.

At the time, SAP’s Brett Parker dismissed the claims as “factually incorrect and unsubstantiated”. SAP now says these allegations are “still under investigation”.

“For us at SAP this has been a deeply humbling and humiliating process. There’s no doubt we have considered it be an extremely serious incident in our business,” Fox-Martin said. DM

Scorpio is the Daily Maverick’s new investigative unit. If you’d like to support its work, click here

The amaBhungane Centre for Investigative Journalism is an independent non-profit. Be an amaB supporter to help it do more. Sign up for its newsletter to get more