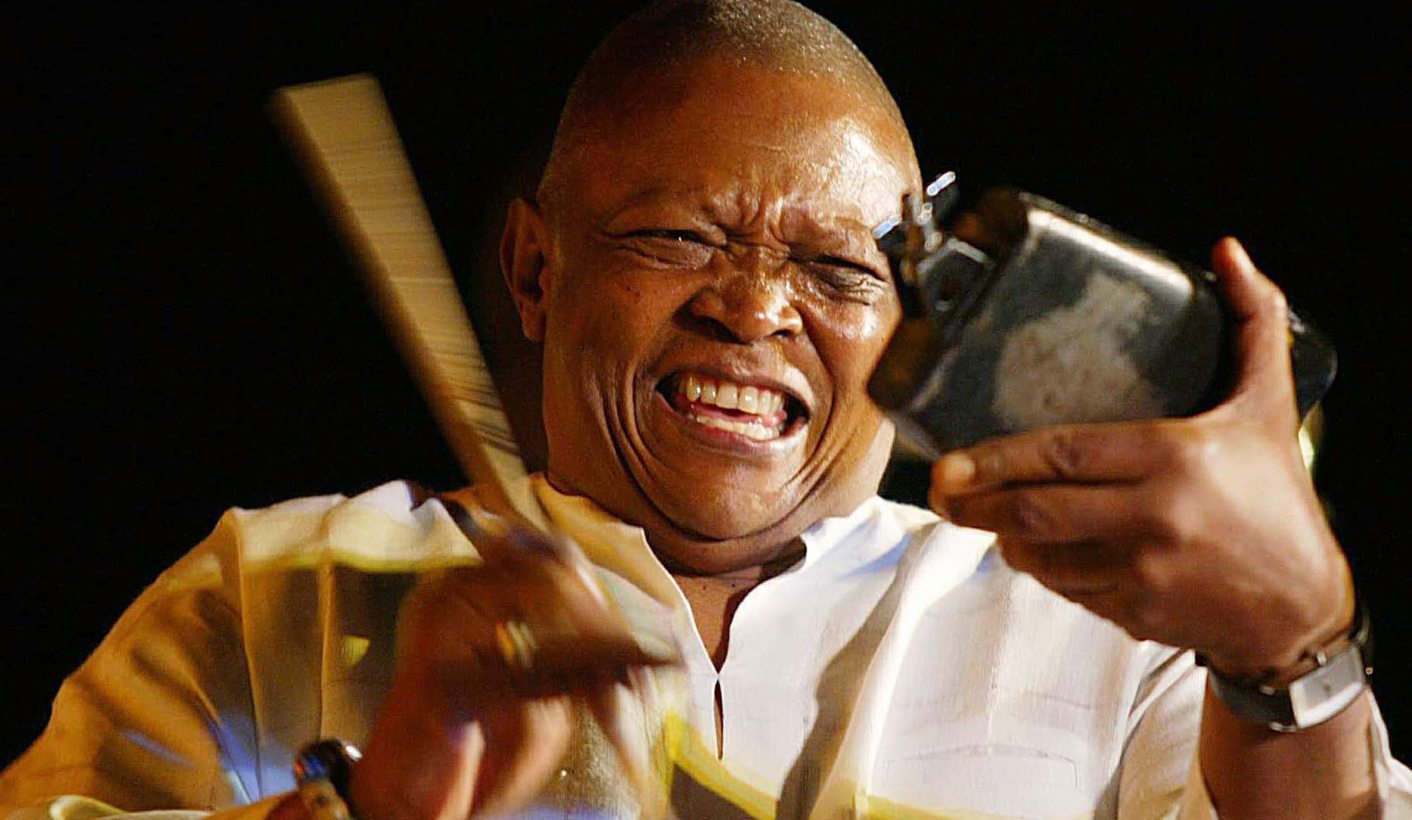 When President Cyril Ramaphosa quoted – in his inaugural address to South Africa's Parliament – the song “Send Me” by Hugh Masekela, he was not only honouring the musician, but evoking the lyrics of an immensely popular traditional church chorus which highlights themes of self-sacrifice, individual responsibility and the importance of personal change in mindsets. TINYIKO MALULEKE unpacks the full import of Ramaphosa's quotation.

If the resignation of Jacob Zuma as president of South Africa marked the end of a 10-year nightmare for many in the country, incoming President Cyril Ramaphosa’s State of the Nation Address two days later seems to have stirred up some hope.

The speech contained several titillating ideas but it was Ramaphosa’s quotation of the words of Hugh Masekela’s song, Thuma Mina/Send Me at the end of his speech that appears to have been particularly inspirational. So much so that – as he told Parliament in his reply to the debate on his speech – many South Africans sent him messages consisting of only two words: “Send Me.”

Except for a handful of commentators who criticised the Ramaphosa speech for lack of plans and detail, even the usually virulent official opposition party, the Democratic Alliance, was subdued and cautiously optimistic .

The song Send Me is the title track from Hugh Masekela’s album of the same name. By quoting his song, Ramaphosa achieved two goals at the same time – honouring the memory of the late Masekela, who died in January 2018, and using his words to inspire the nation.

With these words, Masekela paints a vision of a future in which “the people” (not the government!) will “start to turn it around”. For South Africans, the future envisaged here was captured in the ANC’s slogan for the country’s first democratic elections in 1994 – “a better life for all”.

Hugh Masekela released his album Send Me in 2002, eight years after the dawn of democracy. Even then, Masekela, a struggle stalwart in his own right, feared that the dream of Mandela was beginning to slip. Masekela could sense the mood of disappointment and growing despair in society. In some ways, the song Send Me is intended to confront the disillusionment and to call upon his countrymen and women to get directly involved in finding solutions to the challenges they faced.

At the time Send Me was released, the HIV/Aids pandemic was ravaging the community and the Mbeki government was in deep denial. The lyrics also raised the issue of violence (against women and children) and abuse – the other South African pandemic. And the often over-hyped “unprecedented economic growth” of the Mbeki years failed substantially to produce jobs, reduce poverty or decrease inequality.

Masekela was one of the most astute interpreters of the social issues of his times. The themes of poverty, HIV and Aids, drug addiction, violence, abuse, migration, dictatorship and hope in his music were a direct result of his sensitivity towards the marginalised and his alertness to social issues.

Yet Masekela meant to do more than just interpret the world: he wanted to change it, as Karl Marx once advised. However, he recognised that, as Mahatma Gandhi taught, one must “be the change you want to see in the world”. Thus, at around the same time as he wrote Send Me, he both sought help to overcome his own substance abuse and established an organisation to help other musicians do the same.

But we can pinpoint more precisely where Hugh Masekela found the inspiration for the song. In his biography, Still Grazing, Masekela notes that as a child growing up in Witbank, east of Johannesburg, and later when he lived in Alexandra township in Johannesburg, “we were surrounded by music everywhere”. Among the many kinds of music were the choruses sung in the churches, including those he learnt from his “God-fearing, Lutheran prayer woman” grandmother.

Masekela recalls the impact of African church music on him as a child thus:

“Bible-thumping ‘born again’ men and women of the Holy Sanctified Donkey Church, a palm-leaf-crowned baby donkey in the lead, would sing soulful African gospel … pleading with us to repent, to accept God. ‘Guquka’ (repent) they’d yell, wiping drenched foreheads with their white handkerchiefs… punctuating their songs with an occasional ‘Hallelujah!!! Aaaamen!!!’.”

Some versions of the song Thuma Mina – translated as Send Me from the South African languages of isiZulu, isiXhosa and isiNdebele – are perhaps as old as the earliest churches in southern Africa. If Masekela’s song Market Place is a tribute to the musical influences of legendary Zairean guitarist Luambo Makiadi, also known as Franco, and if the song Lady is his tribute to the legendary Fela Kuti of Nigeria, then Send Me is a tribute to the influence of the music of the African churches of his youth.

“My friends and I rushed from one street to another, from squares to open fields, following Lekganyane’s Zion Christian Church brass bands as they marched in their military khaki uniforms …. We marched behind these battalions for God, lifting our knees high, following the ethnic pipers as though bewitched. We drank in the noises and revelled in the hilarious chaos of African sorcery and madness – oblivious of cold, rain, wind, dust or curfew.”

To this day, the chorus Thuma Mina remains immensely popular in South Africa’s churches. There are as many versions of the song as there are church denominations and it is sung in different indigenous languages. It speaks to popular themes in African churches during the modern missionary era, themes that have stood the test of time, namely recruiting others to a changed lifestyle or evangelisation, taking individual responsibility, personal change (repentance) and personal sacrifice.

The choruses sung in the churches are often based on biblical verses which they may either quote directly from or creatively respond to. Thuma Mina is clearly based on the story of prophet Isaiah’s interaction with God in Isaiah 6 in the Old Testament (quoted above).

A willingness to be sent to carry out a task or mission, and the capacity to muster the obedience and discipline necessary to accept being sent, are pervasive and creative ethical principles. They are based on a recognition of the power of personal change and agency, the courage to choose a noble cause, the adoption of a bigger vision than hitherto held as well as a willingness to market the chosen cause in recruitment of others.

During their nascent years, the ANC, like the first African churches of the 17th , 18th and 19th century, must have relied on “new converts” to the noble cause of liberation to recruit other “converts”. Going back into the early 20th century, several ANC leaders had experience in religious recruitment and mobilisation.

Zacharias Richard Mahabane was a man of the cloth. ZK Matthews was a visiting professor of missions at Union Theological Seminary, New York, and later became secretary for the Africa Division of the World Council of Churches. Albert Luthuli was a lay preacher. Nelson Mandela and Oliver Tambo were Sunday school teachers. Cyril Ramaphosa was a leader in the Student Christian Movement.

In the South Africa of the Zuma era, people no longer wanted to say “Send Me” unless there was something in it for them. In Jacob Zuma, South Africans had a president who seemed unwilling to engage in ethical behaviour, was averse to taking personal responsibility and appeared incapable of countenancing personal sacrifice.

Thus, in South Africa today, the themes of individual responsibility, the importance of personal change in mindset and self-sacrifice have become particularly pertinent. When Cyril Ramaphosa quoted Send Me, he was not only honouring the memory of one of the best musicians in Africa and the world, but he was also summoning the power of the rich history of the ANC and invoking the bewitching lyrics of African church music.

The South African struggle against apartheid often fed off the music of the African churches. Many of the tunes sung as songs of struggle are in fact appropriated African church hymns and choruses re-purposed for the Struggle .

Hugh Masekela consistently and vehemently rejected the label of “legend”. Instead, he described himself as “a good receiver of the gifts of the people I come from”. Send Me was one such gift, received from the African churches with profound humility and extraordinary creativity. DM

Professor Tinyiko Maluleke is a professor of theology whose research focuses on the interface between politics, religion and culture. Formerly President of the South African Council of Churches and Deputy Vice Chancellor at the University of Johannesburg, he currently serves as Adviser to the Principal and Vice Chancellor at the University of Pretoria.