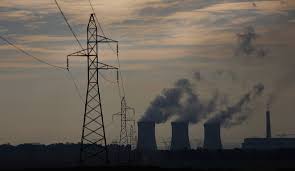 Optimum Coal Mine management has laid the blame for the company’s severe financial woes at the door of state-owned companies Eskom and Transnet – this despite lagging far behind on its coal supply obligations to the power utility. By Jessica Bezuidenhout for SCORPIO.

George van der Merwe, CEO of Optimum Coal Mine, has said that as from the beginning of this year, Transnet had suspended its rail facilities, Eskom was now deducting penalties from payment due to the company and Bank of Baroda was allegedly failing to honour a court order that compelled it to retain the company’s banking facilities.

Van der Merwe was addressing members of the National Union of Mineworkers who had downed tools in their quest for information about the sale of the mine and the financial woes of the company. The labour protest involved around 500 full-time staff and 2,000 contract workers.

Without access to the Transnet rail facilities, Optimum was unable to move export coal to the Richards Bay Coal Terminal, usually a key source of revenue, Van Der Merwe said.

He said income from export coal had formed part of the mine’s initial business model but that it had now become impossible to generate income from it.

Van der Merwe, standing under an umbrella in the slight Mpumalanga rain on Thursday afternoon, said Eskom too had changed the game-plan as of January.

Under Glencore, the previous owner of the mine, the power utility reserved penalties but now it was deducting such penalties from payments due for the delivery of coal. “We expected Eskom to do the same for us,” Van der Merwe said.

Eskom earlier told Daily Maverick that the company had failed to deliver the required coal volumes as per their contract. And, although it had presented a recovery plan to make up for the shortfall, it has been trying to “close the gap for several months now”.

Van der Merwe confirmed publicly that the mine is being sold to Charles King SA, an unknown Swiss-based entity whose director has previous links to the Guptas – and that the company has paid a “deposit” towards the purchase. The Guptas announced the R2.9-billion sale in August last year.

Although such a transaction is subject to regulatory approvals, Daily Maverick has confirmed that Tegeta has not notified the Department of Mineral Resources, the Competition Commission or Eskom, one of its key customers.

Workers at Optimum suspended operations on Wednesday citing concerns about the extent of the company’s money problems, its inability to pay suppliers and claims that it was in violation of some of its social and labour plan commitments. DM