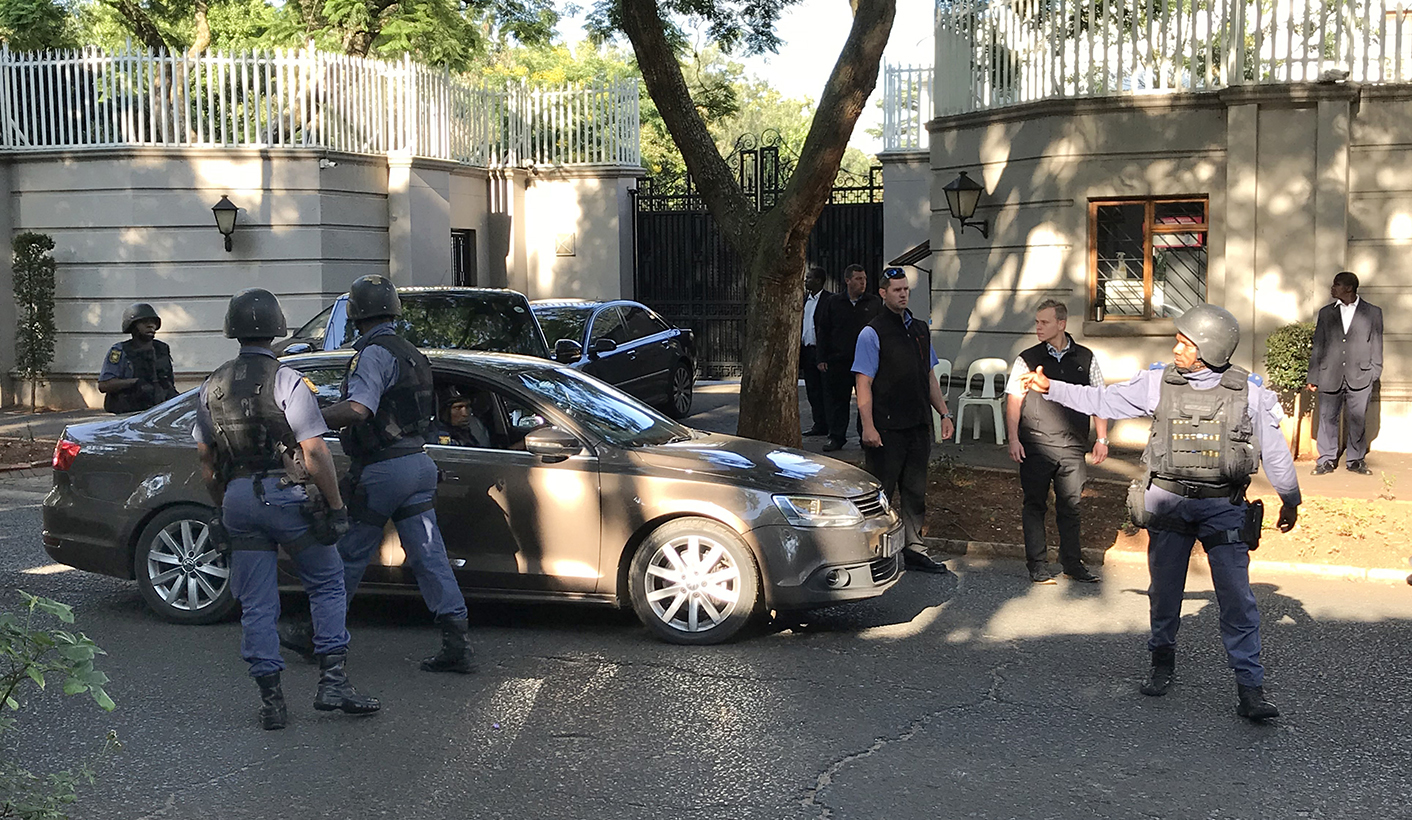 Wednesday was supposed to be D-Day for President Jacob Zuma, but thus far it’s also shaping up to be a day of reckoning for his friends. The Hawks have confirmed that they have raided Gupta-linked properties around Gauteng and arrested three people with further arrests planned. Much information circulating is speculative and the operation is described as “ongoing” – but here’s what we know so far. By REBECCA DAVIS.

The Hawks struck early on Wednesday. Reports from Saxonwold residents suggested that vehicles belonging to the Directorate for Priority Crime Investigation arrived at the Gupta compound in the upmarket Johannesburg suburb at around 6.30am.

Eyewitnesses said that police sealed off the area around the Gupta home and led several people out from the interior.

“The operation is in respect of the Vrede Farm investigations,” Hawks spokesperson Hangwani Mulaudzi confirmed in a statement.

Daily Maverick had learnt that the warrant for the operation was under preparation for at least a week, but until Tuesday was not yet signed.

“We have a lot to do today,” Mulaudzi told ANN7 on Wednesday morning. “There are a lot of operations that are still going to take place. I’m told at Saxonwold we may have concluded our operations so we are moving to other addresses in terms of trying to make sure we finalise everything.”

Then came the arrests.

“Three people have been arrested,” Hawks spokesman Mulaudzi told Daily Maverick at noon on Wednesday. Further arrests are planned, he said, but he could not give numbers.

Mulaudzi said that, contrary to some reports, nobody was yet expected to appear in court on Wednesday.

The identities of those arrested cannot be released at this stage. Inevitably, speculation is rife.

A photograph taken of a Hawks official outside the Guptas’ Saxonwold home showed him holding a folder with four names listed under the heading “Subject”.

Of Gupta family members facing arrest, much will come down to who among the family is in South Africa at the moment.

Oldest brother Ajay was known to be in the county as recently as last week.

Rapport published a photograph last weekend of Ajay Gupta and Oakbay CEO Ronica Ragavan landing at the Gupta-owned Optimum coal mine in Mpumalanga.

Daily Maverick understands that Ragavan’s name was among those of Gupta business associates includes on the Hawks’ warrant list.

In a Hawks statement on the matter, the unit specified that Wednesday’s operations are “in respect of the Vrede Farm investigations”.

As such, the site of some post-arrest action is likely to be in the Free State, where the controversial Vrede dairy farm is situated, with forthcoming court appearances potentially in Bloemfontein.

State prosecuting authorities are known to have been building a case related to the Vrede Farm for some months. In January, the NPA applied for – and were granted – an order to freeze assets amounting to R220-million after submitting court papers compiled by the Asset Forfeiture Unit.

Among the revelations contained in these papers was that R10-million of government money intended for the Free State dairy project was channelled straight to the personal bank account of Atul Gupta. Atul, the middle Gupta brother, therefore looks likely to be a person of interest to the Hawks.

President Jacob Zuma’s son Duduzane may also be implicated. The NPA papers revealed that R6-million of government money in the Vrede affair was also channelled to Westdawn Investments, a company of which Zuma Jr was a director alongside the youngest Gupta brother Tony. Duduzane Zuma had personal holdings in Westdawn of at least 10%.

Another figure who may plausibly be implicated by the Hawks at this stage is Free State agriculture accounting officer Peter Thabethe.

The otherwise incomplete Public Protector report on the Vrede dairy scandal, released last week, singled out Thabethe as responsible for wrongdoing from the side of government.

When the Vrede dairy agreement between government and the Gupta-owned Estina company was implemented, the report states, Thabethe “knowingly signed an authorisation to deviate from the correct supply chain management process” and “was not clear on the grounds that justified him deviating from the prescribed process”.

#Guptaleaks investigations into the Vrede dairy project carried out by amaBhungane and Daily Maverick’s Scorpio have suggested a number of other key players in the establishment of a scam which saw the Free State government cover most of the expenses for the Guptas’ infamous 2013 Sun City wedding.

One of those feeling the heat most acutely as the Hawks move in must be Mining Minister Mosebenzi Zwane, who personally championed the Vrede project in his erstwhile capacity as Free State agriculture MEC.

It is no exaggeration to say that the Hawks’ actions on Wednesday may have a seismic effect on the landscape of ANC politics. Questions are already being asked whether the timing of the Hawks’ moves is related to President Zuma’s ongoing unwillingness to step down as head of state.

At time of writing, there was not yet a peep out of the Union Buildings from Zuma. DM