Analysis: If Zuma doesn't quit, it's over to parliament...

Analysis: If Zuma doesn’t quit, it’s over to parliament with no good options for the ANC 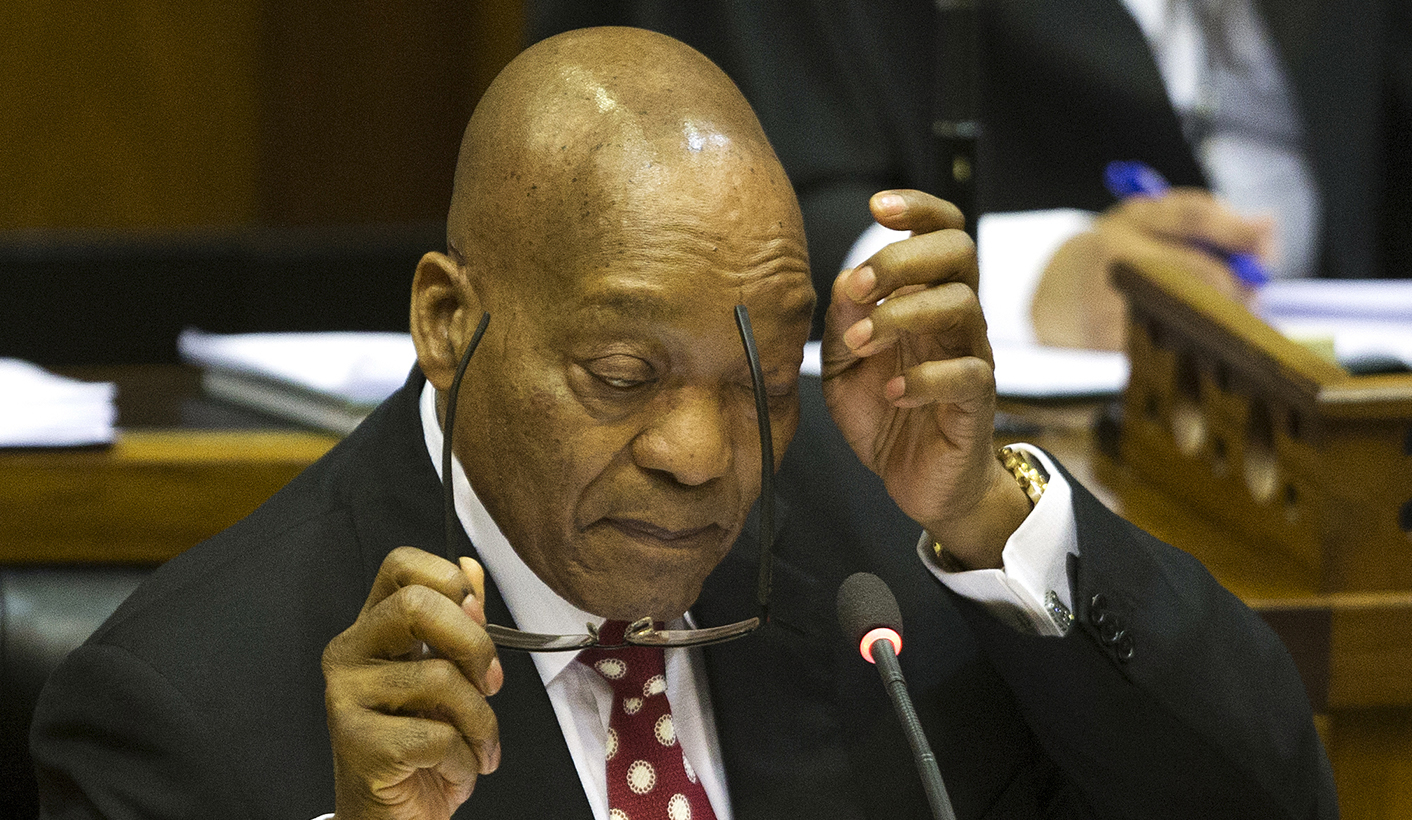 If President Jacob Zuma doesn’t take the political route and resign, the ANC’s political shambles hit Parliament. And at the national legislature, there are no good options for the governing party. Wednesday’s urgent ANC parliamentary caucus to be addressed by its officials was called in the early hours of Monday morning after the ANC National Executive Committee (NEC) decided on Zuma’s recall. For the second time in seven days Parliament cleared its schedule for the political debacle. By MARIANNE MERTEN.

No, Magashule said, the ANC had not yet decided on its own motion of no confidence: “Whatever processes in Parliament, once we have a response (from Zuma), will happen.” But beyond that there was little more than some political point-scoring by criticising opposition parties as “opportunistic” for insisting the EFF motion of no confidence must be debated this week, followed by a motion to dissolve Parliament for early elections and “other desperate acts”.

Magashule’s comments, including that an announcement was expected on Wednesday – the day’s Cabinet meeting was cancelled – came against the backdrop of a series of meetings in Parliament between politicians and officials on various options and, Daily Maverick has reliably learnt, also among ANC MPs.

Meanwhile, National Assembly Speaker Baleka Mbete continued consultations on the opposition call to have the EFF no confidence motion, scheduled for 22 February, brought forward to this week. Those consultations involve ANC Chief Whip Jackson Mthembu and Cyril Ramaphosa, who in his capacity as South Africa’s deputy president is also leader of government business, or the liaison between the executive and national legislature. Pending this process, on Tuesday the EFF relented on its decision to go to court to force the matter.

If Zuma defies the ANC NEC’s expectation that its deployee as a public representative would honour a recall in line with Section 12.2.21.2 of the party constitution, the political option is shut. And then Parliament comes to the fore in the ANC political debacle: with no rules finalised for the removal of a sitting president under Section 89 of the Constitution, colloquially dubbed impeachment, the only option is a Section 102 motion of no confidence.

The problem for the ANC is that the EFF no confidence motion is first up, and must be debated first in terms of parliamentary practice and procedure. That principle was established last year when both the EFF and DA filed motions to remove the President, but the DA was pipped to the post. Parliamentary insiders say the dispute whose motion on the same subject should be debated caused quite a lot of hot political venting, but it set a precedent — first in, first on the order paper, first to be dealt with in the House.

It is expected that the ANC at Wednesday’s Chief Whips’ Forum could bring on the pressure, or charm, to persuade the EFF and other opposition parties to withdraw that motion.

The opposition has dismissed this possibility, although on Tuesday the Freedom Front Plus, which only a day earlier associated itself with the joint opposition support of that motion, broke ranks. FF+ leader Pieter Groenewald called on the EFF to withdraw the motion because it was “of the utmost importance that the ANC will table the motion seeing as the ruling party will not support the motion of no confidence tabled by an opposition party, in this case the EFF. If the EFF really is serious about getting rid of the President, they will withdraw their motion”. Together with the African People’s Congress (APC) MP Themba Godi, Groenewald was a lone voice.

EFF Chief Whip Floyd Shivambu was adamant the no confidence motion as tabled would proceed. “All parties (at Parliament) must now 100% agree Zuma must go,” he told Daily Maverick. And there is wide-ranging support among the opposition, where the view was that Zuma’s recall was “long overdue”.

But the ANC is in a political pickle. Its caucus remains divided, even if the much-touted new mood is swaying many away from continued support of Zuma, now also buoyed by the ANC NEC decision on his recall. In this context there is word of a growing sentiment that the governing party must just bite the bullet and vote with an opposition motion. But a significant section of the ANC parliamentary caucus is understood to stick by the long-held tradition that no-one but the ANC will decide for the ANC. “No political party sets the agenda for another political party,” is how one insider put it.

That was the mantra also in August 2017 when the ANC parliamentary caucus was whipped into line to defeat the opposition motion, described by party heavy weights as tantamount to regime change. While the motion was defeated, the numbers also showed at least 35 ANC MPs used their secret ballot to vote with the opposition or to abstain, bucking the party line.

Could the ANC find itself in the uncomfortable and politically damaging position of voting against the EFF no confidence motion only to bring its own?

There are other possible parliamentary options that Daily Maverick understands are being looked into. One is for the ANC to bring an amendment to the EFF motion of no confidence, thus making it its own and saving face. Parliament’s guide to procedure allows for this: “Amendments must be relevant to the motion, and may not introduce a new subject or extend the scope of the original motion”. Or it could be as uncomplicated – that’s relatively speaking in these difficult political times – as allowing a secret ballot and then washing the collective party hands on the basis that no-one can trace how ANC MPs voted.

It is understood that the ANC discussions preferred Section 90 of the Constitution, in terms of which Ramaphosa could be appointed as acting president. It would require no role of Parliament, only a swearing in by the Chief Justice Mogoeng Mogoeng or a judge delegated by him. Or the ANC could go to Parliament to elect a new president. If this route is taken and Ramaphosa is sworn in as president, Section 88(2) of the Constitution says the time to the 2019 election did not count as a term of office. The Constitution limits presidential terms to two. That’s, of course, dependent on election performance.

The best the ANC can hope for is that Zuma heeds the NEC’s recall and tenders his resignation – even if Magashule was unclear exactly why Zuma was being recalled when asked repeatedly on Tuesday. “We must treat President Zuma as the President of the Republic. President Zuma has not been found guilty in a court of law… He has not done anything wrong.”

The ANC has been seized with the Zuma exit debacle for some 10 days since two Sunday’s ago when its top officials’ request for his resignation was dismissed. Amid the unfolding political machinations with repercussions well outside of the governing party, the 8 February State of the Nation Address (SONA) was postponed last week. There have been “fruitful and conducive” discussions, postponements and the rescheduling of postponed meetings.

Parliament has made the political space for matters of the governing party to find resolution. What happens next is up to Zuma. DM