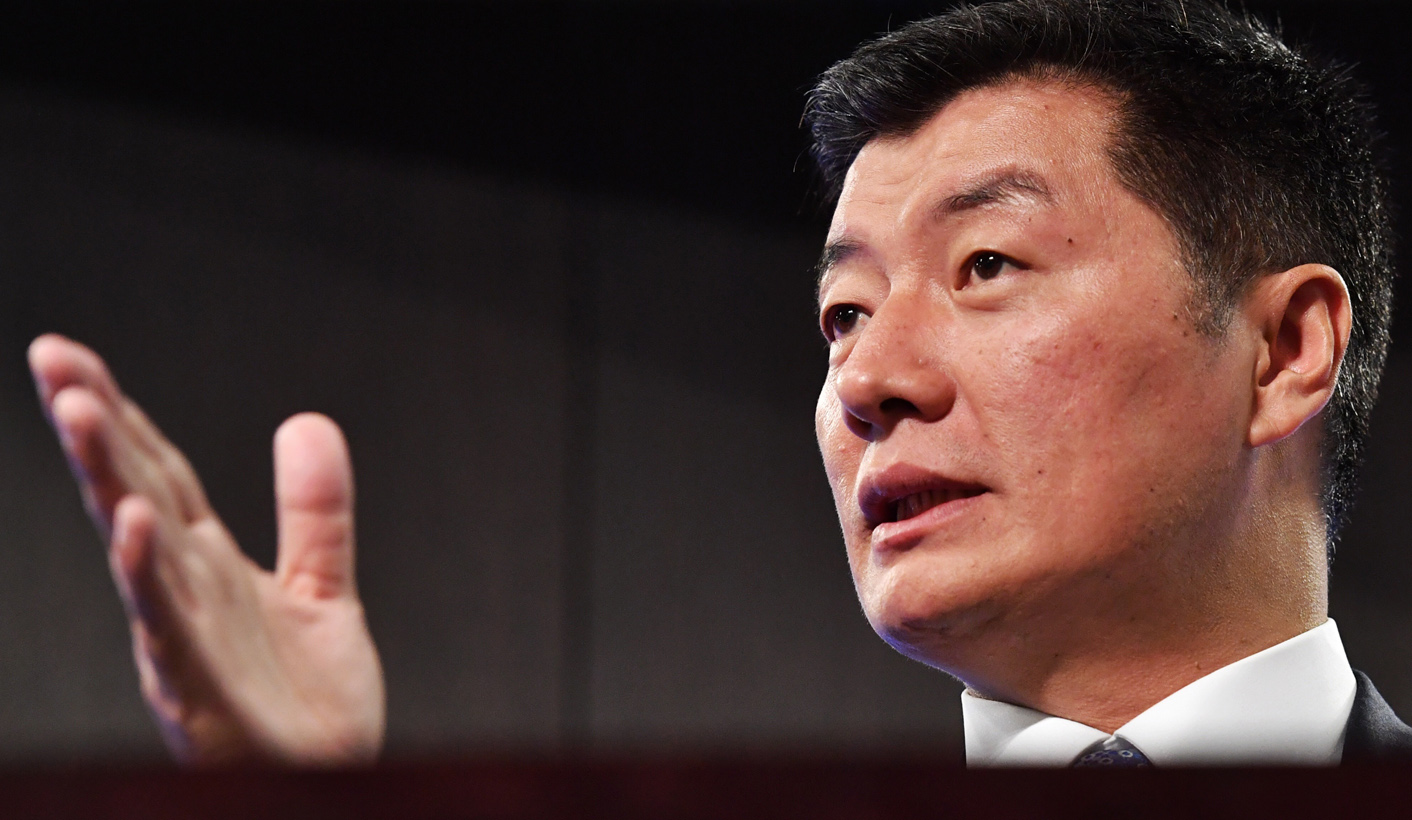 A diplomatic row has erupted between South Africa and one of its closest allies, China, over Pretoria allowing the exiled president of the Tibetan government in exile, Lobsang Sangay, into the country. By PETER FABRICIUS.

The Chinese embassy in Pretoria  on Thursday strongly protested to the South African government about the visit of the exiled president of the Tibetan government in exile, Lobsang Sangay, which it said had “undermined the political trust between China and South Africa” and would discourage Chinese investment.

In an unusually strongly worded statement, the embassy said Sangay’s visit had run against the South African government’s “long-standing commitment to the One China policy”.

“It has sent a wrong political signal to the world community, and has undermined the political mutual trust between China and South Africa. It runs against the common interest of SA-China relations, and will undoubtedly discourage Chinese investors’ confidence in South Africa, undermine SA’s efforts for poverty reduction, and cause grave harm for the interest of South Africa and the South African people.”

The South African government is evidently furious at the Chinese embassy’s statement, but has not yet reacted officially. Privately officials are incensed that a “strategic partner” could use such threatening language against South Africa – especially after Pretoria had gone out of its way to be helpful.

But the officials said there was nothing the government could do to stop Sangay entering the country as he was travelling on a US passport and so did not require a visa and had been invited to South Africa by the Inkatha Freedom Party.

They said China did not seem to appreciate that South Africa was a democracy where the government did not have total control.

Sangay is the president of the Tibetan government in exile which is based at Dharamsala in India. The Dalai Lama, the exiled government’s spiritual leader, is also based there. The South African government had denied the Dalai Lama a visa to enter South Africa three times over the last nine years.

The Chinese embassy said Sangay, “the so-called head of the ‘Tibetan Administration in Exile’”, had been forced to cancel his plans to speak to the Law Faculty of the University of Stellenbosch on Thursday due to “massive” and “fierce” protests by “hundreds of outraged South African locals and members of the Chinese community in South Africa”.

It added, “Due to the furious opposition and rejection from the South African government, the ruling party, and people from across the society, Lobsang Sangay was forced to cancel all public activities in South Africa.

“Protesters said that to allow Lobsang Sangay to visit South Africa, and even worse, to put up a stage for this person to make political shows itself runs against the SA government’s long-standing commitment to the One China policy,” the Chinese embassy statement said.

“Some people said it breaks the promise of the South African government to allow the Tibetan separatist elements to come to China. It undermines SA-China co-operation and will eventually undermine our interests. People are extremely outraged by Lobsang Sangay sabotaging the China-South Africa friendly co-operation that the two peoples have spent so much energy and efforts to build and grow.”

The embassy said that Sangay had “sneaked into South Africa visa-free with his US passport… with the ill intention to split China and to undercut China-SA relations.”

When the embassy had discovered this it had “immediately raised strong representation and protest to the Department of International Relations and Co-operation (Dirco). Dirco then issued a stern warning to the so-called representative of the Dalai group in South Africa, who claimed that Lobsang Sangay will not engage in any public activities.”

The “Dalai group in South Africa” evidently referred to the Office of Tibet – or the office of the representative of the Dalai Lama – in Centurion. The current representative is Ngodup Dorjee.

Earlier Sangay told Daily Maverick in an interview that he was on a four-day visit to South Africa.

“I’m here, in some ways, to remind the South African government of the principles and values on which their Constitution and country was founded. Because of friends around the world, because of support from the international community, South Africa has gained its democracy. So it’s natural for me to come and say, hey, we need your support now as well,” he said.

The Chinese embassy claimed Sangay’s visit and his “attempted political show at the Stellenbosch University have generated fury among the common South Africans. When Lobsang Sangay arrived at the Stellenbosch University, several hundreds of angry protesters have already gathered and were time and again shouting slogans with banners ‘Only one China in the world’, ‘Tibet is an inalienable part of China’, ‘Hands-off One China principle’, ‘Stop sabotaging SA-China relations’, ‘No splitting China’.” When he exited from the back door the building, some protesters shouted, “get out of South Africa”, the embassy said.

Daily Maverick was unable to independently verify the existence or size of the protests or the “furious opposition and rejection” of the South African government or the ANC.

Dirco spokespeople were unable to confirm that the Chinese embassy had protested to it about the visit or that Dirco had issued a “stern warning” to the Dalai Lama’s representative.

Daily Maverick was also unable to reach “common South Africans” to confirm the embassy’s statement that Sangay’s visit had “generated fury” among them.

Sangay’s government seeks much greater autonomy for Tibet but Beijing fiercely resists this, claiming it as part of China. DM