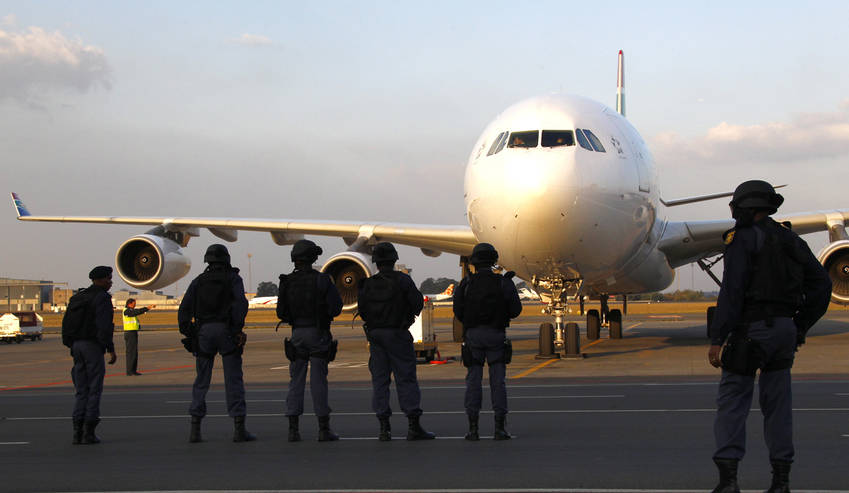 The woes of President Jacob Zuma and his Gupta buddies have left some of the family’s henchmen with many a lonely pickle. Take one-time lieutenant Althaf Emmamally, a key insider who tried to reinvent himself courtesy of a R900,000 a month deal at the Airports Company of SA – now Acsa is threatening to recover the money amid questions over how he got the deal, right in the thick of the State Capture scandal. By JESSICA BEZUIDENHOUT for SCORPIO.

Althaf Emmamally, for years a key player in the Gupta empire, scored a back-door ticket to a deal at the Airports Company of South Africa, right as the State Capture noose began tightening last year.

The R5.2-million contract for specialised procurement services was awarded to Investment Edge Technology as an emergency bid because Acsa seemingly didn’t have time to go out to tender.

Aimed at curbing wasteful and irregular expenditure, the six-month contract – it was completed in August – was essentially a first-class ticket to the inner workings of the supply chain system at Acsa.

His deal has become the subject of a forensic investigation by the parastatal – along with another, clinched just three months before one of Emmamally’s other companies teamed up with the Guptas.

Investment Edge Technology was initially registered with Emmamally as the sole director, but by the time the deal was signed last March, he had been replaced by a 23-year-old woman.

The woman, whose identity is known to Daily Maverick, now appears to be either MIA or extremely media shy as she has failed to respond to multiple enquiries about the nature of her links to the company – those included messages left with individuals who identified themselves to Daily Maverick as “her husband,” and “her mother”.

Electronic company records still list her as the only director of the company but indications are that she may have been roped in as a proxy as Emmamally feared losing out due to his rather fresh Gupta ties at the time.

Two insiders with knowledge of the deal claim it was designed to be at arms-length as part of Emmamally’s efforts to re-establish his solo career after things went pear-shaped for the Guptas and some of their lieutenants.

“His name was f***d, that’s why he couldn’t sign anything,” said one of them.

At the time of the signing of this deal, Emmamally’s name and that of one of his other companies, had already popped up in the vicinity of several Gupta controversies, one of those an alleged kick-back scandal involving a different state-owned company, details of which were revealed by amaBhungane in late 2016.

Also, State Capture whistle-blowers had named Emmamally as an important player in Cutting Edge Commerce (CEC), a former Gupta company that was subcontracted to work with another little Gupta company, Trillian Capital Partners.

A key issue for some senior Acsa insiders is how the state-owned company’s internal processes failed to flag Emmamally’s involvement with the Guptas, arguing that it should have been a factor in considering him for the deal.

The service level agreement, a version of which Daily Maverick has seen, required the company to declare among other things that none of its directors, officers, partners, shareholders, agents or representatives “has at any time been investigated or been suspected in any jurisdiction of having engaged in any corrupt activity (or similar conduct).

By March last year the Gupta empire was starting to crumble, some of their right-hand men started jumping ship and the rats were squealing.

Emmamally’s fingerprints do not appear on the copy of the contract seen by Daily Maverick but internal Acsa documents show that he had final say over the contract.

In February last year, an Acsa employee sent him an email, saying: “Good day Althaf, please see the attached draft agreement for your perusal and approval.” The deal was signed about a week later. And, the message from Acsa was sent to Emmamally’s old email address, the one used by him during his time with the Guptas.

After initially providing Daily Maverick with an email address, Emmamally over the course of several weeks failed to respond to detailed questions and several reminders for comment that included:

Acsa appears to have prioritised this investigation but has thus far declined to provide Daily Maverick with tender details for the deal or to explain what had triggered its forensic investigation. It said it would seek to recover any moneys paid to the company should it find evidence of wrongdoing.

Additional documents obtained by Daily Maverick contain an official motivation for Acsa’s bid committee to authorise a deviation from standard tender procedure. The contract, it stated, needed to be awarded on the basis of a “restricted bid” in order to save “time and money”.

In order to understand why a back-door arrangement may have been necessary for this deal, it is important to look at where Emmamally fitted into the Gupta operation.

His name is all over the Guptaleaks, often featuring in the company of other senior players in the family’s business empire like Nazeem Howa, Ronica Ragavan and Santosh Choubey for things like “monthly review meetings,” “India Exco delegation” or “procurement work stream leads”.

He was also a director of several companies in the family’s convoluted business operation, including the Tegeta-owned Optimum Coal Terminal until his resignation in July 2016.

Records indicate that Emmamally then resigned as a director of Cutting Edge but remained a shareholder for some time and continued to run the company until the State Capture heat began.

He was an “executive” in Cutting Edge at a time when the company was a subcontractor of Trillian Capital Partners for work on a controversial Eskom deal.

That Eskom deal is now the subject of a criminal investigation by the National Prosecuting Authority and has already resulted in law enforcement authorities obtaining a preservation against the companies as the state seeks to recover nearly R1.6-billion allegedly irregularly paid to Trillian and global consulting firm McKinsey & Co by the country’s power utility.

Although the Guptas later sold their stake in Cutting Edge, a PowerPoint presentation contained in the Guptaleaks suggests they initially had big plans for the little IT company.

“In partnership with Sahara CEC has exceeded R35-million for the first time in its 10-year existence,” the document in the leaks states.

It went on to boast how CEC had finished the year 2015 at R60-million, presumably in sales, and noted plans to help it exceed a R100-million target by the end of 2016 – a mission significantly crushed after following the State Capture revelations.

Cutting Edge along with several other entities around it has systematically “folded,” or morphed into new entities as a result of the State Capture stink.

It had a name change in May, now Leonardo Business Consulting.

A remarkable feat for a 24-year old whose initial contract – also contained in the Guptaleaks – captured the terms of his employment with the Guptas in SA right down to his R700 housing allowance and two 15-minute tea breaks.

Emmamally may well have severed ties with Cutting Edge, he may well have tried to fly solo through Investment Edge Technology and a fresh Acsa deal – but how many of the other Gupta henchmen are quietly reinventing themselves as the country’s focus remains so firmly on the big fish? DM