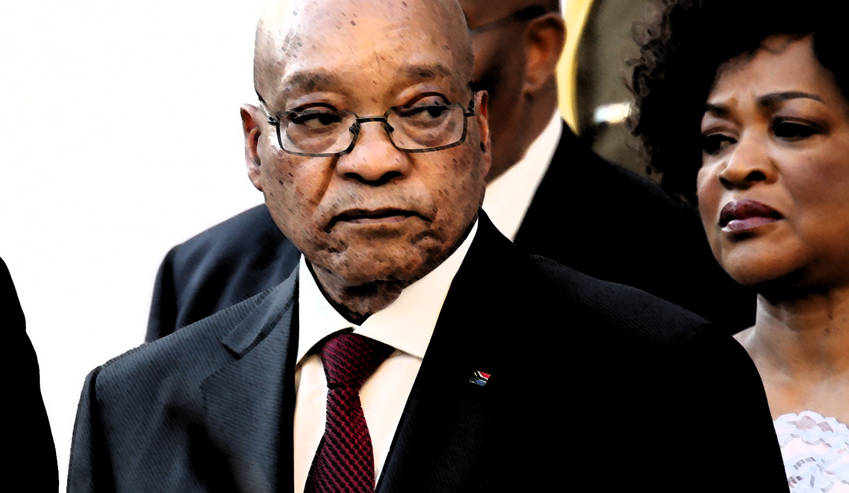 In an unprecedented move – and a sign of the superheated political times around the future of President Jacob Zuma –Thursday’s State of the Nation Address (SONA) has been postponed. National Assembly Speaker Baleka Mbete announced this on Tuesday afternoon, saying the decision was taken in the “best interest of Parliament and the country”. By MARIANNE MERTEN.

It was a short meeting between Parliament’s presiding officers and the representatives of political parties at the national legislature. Scheduled to start at 2pm, some 40 minutes later it was over.

National Assembly Speaker Baleka Mbete, flanked by National Council of Provinces (NCOP) Chairperson Thandi Modise, said given the disruptions of the State of the Nation Address in previous years, there was little likelihood of a peaceful SONA2018. The decision was to await “a more conducive political environment”.

“Developments this year, particularly the calls for disruption and/or postponement of the joint sitting (of both Houses of Parliament) have, therefore, caused us great concern. We have, regrettably, come to the conclusion that there is little likelihood of an uneventful Joint Sitting of Parliament this coming Thursday.”

Mbete added that when the presiding officers went to President Jacob Zuma to inform him of this, he already was drafting a letter with a similar request for a postponement.

In a short statement released after the Speaker’s announcement, the Presidency said it had “requested the postponement due to certain developments which make it not conducive to successfully hold the sitting and deliver the SONA.”

Effectively this statement is an acknowledgement that the controversies in the governing ANC, whose National Executive Committee (NEC) – its highest decision making structure between national conferences – will meet on Wednesday to discuss Zuma’s future. This decision was taken at Monday’s ANC National Working Committee (NWC), a smaller structure responsible for day-to-day operations, after a request by ANC officials to Zuma to step down in their meeting on Sunday was declined.

The postponement of SONA – for a week, according to Modise – has effectively bought time for the ANC to deal with the vexing Zuma exit, or as the governing party describes as the “management of the transition between the 5th and 6th administration of government”.

ANC Chief Whip Jackson Mthembu supported the presiding officers’ decision, saying it was the right one for Parliament “to give us time to resolve whatever political matters”. Opposition parties, which had pushed for a postponement in a united front given Zuma’s plethora of court cases and scandals, agreed. DA Chief Whip John Steenhuisen said the party was “delighted”; this decision meant “Parliament has been saved the disgrace of being addressed by a discredited President”.

Never before has a SONA been postponed. Tuesday’s announcement of this on the steps of the National Assembly stairs, came five days after a briefing by presiding officers and their deputies that Parliament was ready to host the annual traditional ceremony and presidential address that mark the start of the parliamentary calendar.

However, the uncertainties of the political times were apparent even then: in a 90-minute briefing no one actually actually named Zuma as the president to deliver SONA. All references were to “head of state” or the “president”.

Postponing SONA is a heavily significant politically decision, but not necessarily a train smash. However, postponing the Budget, scheduled for 21 February, is simply a no-go. It would smash any and all confidence around South Africa’s economic governance, already bedevilled by State Capture and tax collection shortfalls, and undo much of the work done with financial services sector, but also internationally as at the World Economic Forum in Davos, Switzerland.

But presenting the allocations to departments to execute government programmes and projects depends on SONA, the presidential address to outline government priorities. And so the pressure is on. Modise indicated SONA would not be postponed for more than a week, or so. This would leave enough time for Budget to go ahead – possibly under a new leadership in the ANC government, depending on the outcome of Wednesday’s ANC NEC.

The DA and the EFF, which both wrote to Mbete requesting the postponement welcomed Tuesday’s announcement. EFF Secretary General Godrich Gardee said he would be shocked if Zuma now resigned. “Mr Zuma is gonna refuse to resign just like he refused during the time with Mbeki. He will defy his own party,” Gardee told eNCA. “He is stubborn and does not want to resign.”

DA leader Mmusi Maimane said SONA could only proceed after Zuma is removed. “We cannot waste money, time, nor another iota of our dwindling credibility on the international stage by allowing Jacob Zuma to deliver the State of the Nation Address,” he said on Tuesday. He said the DA would ask Mbete to put an impeachment process back on Parliament’s agenda.

Political analyst Professor Somadoda Fikeni reacted: “This is the clearest sign – the calling of the NEC meeting and the postponement of SONA – that the Zuma Presidency is unravelling and he is going to step aside.”

Fikeni said Zuma probably saw the writing on the wall. He was isolated as his long-standing supporters had not come out in his defence, had repeatedly contradicted his past criticism of the two centres of power, and his allies in the KwaZulu-Natal ANC leadership were weakened.

Professor Susan Booysen from the Wits School of Governance said the political signals all point to Zuma’s imminent resignation: “I really think he is in a corner.” She said Ramaphosa will probably want to gain political mileage from Zuma’s resignation and chart a new course for the ANC when the new president delivers the SONA.

Ralph Mathekga, who authored When Zuma Goes, said the postponement shows the mounting level of pressure on Zuma. He said the opposition parties should be credited for pressuring Mbete and Modise. Mathekga called for the ANC to expedite Zuma’s removal as the party’s in-fighting has had severe repercussions. DM