SONA2018: Parliament sets stage for the unnamed ‘head of state’ to address the nation 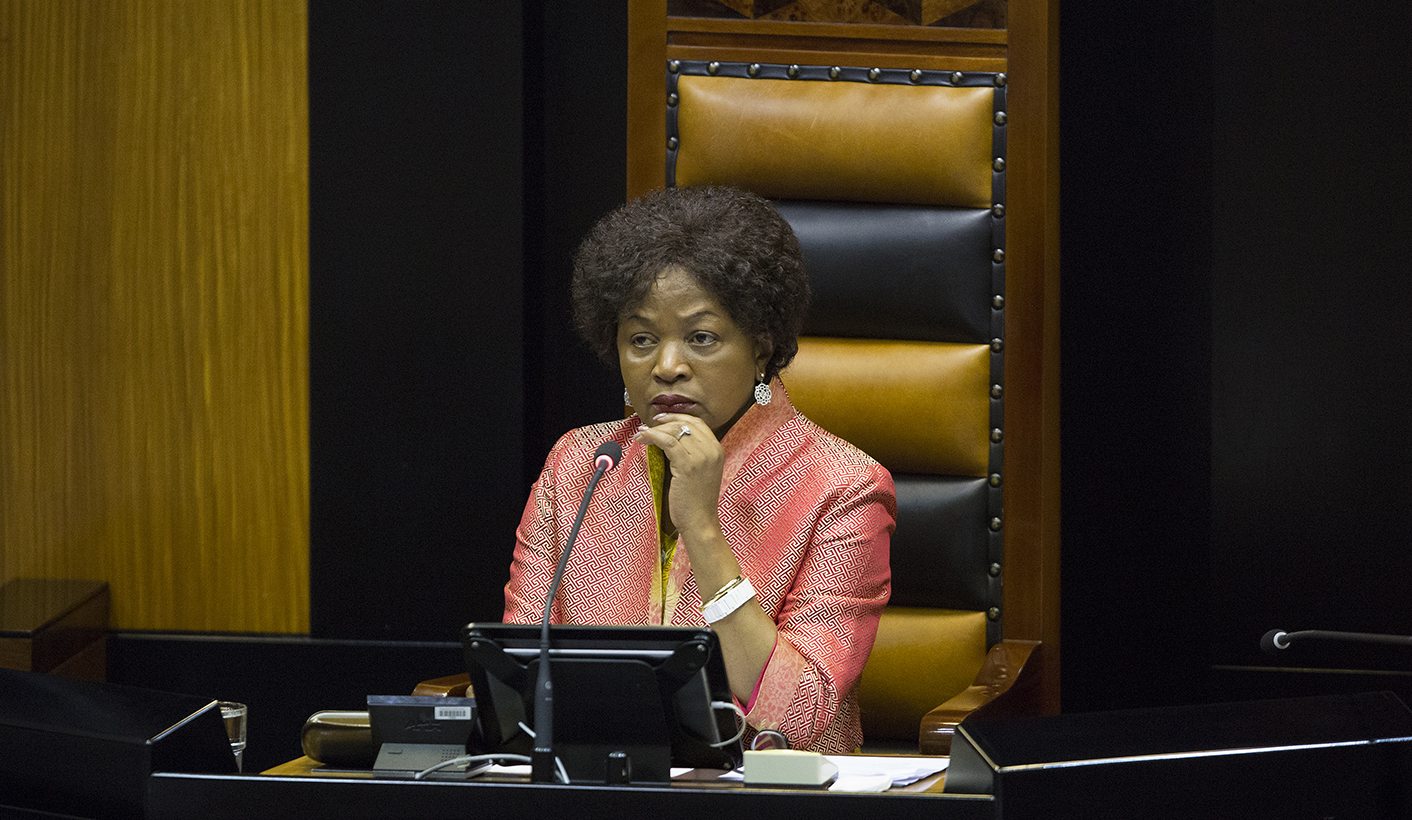 President Jacob Zuma may well deliver next week’s State of the Nation Address, but it will be ANC president Cyril Ramaphosa addressing the commemoration on 11 February of Nelson Mandela’s release from jail, 28 years later to the day. These political visuals hint at the behind-the-scenes contestation within the governing ANC. On Thursday Parliament’s presiding officers said the address would go ahead, to be delivered by the “head of state”, but stayed clear of naming names. By MARIANNE MERTEN.

The Z-word – President Jacob Zuma – was not once mentioned during a 90-minute briefing on the State of the Nation Address (SONA) under the theme of “Making your future better – learning from Madiba” by National Assembly Speaker Baleka Mbete, National Council of Provinces (NCOP) chairperson Thandi Modise and their respective deputies.

That was a matter the ANC was seized with, and the governing party should be allowed the space to do so, was the word from NCOP Deputy Chairperson Raseriti Tau: “It’s a matter of the ANC, let’s leave it to the ANC.” National Assembly Deputy Speaker Lechesa Tsenoli agreed: “That decision will be taken by the ANC.” Modise later added that this was “a matter political… actually outside our control”.

It also emerged at Thursday’s briefing that despite discussions for a date for the EFF motion of no confidence, a special sitting ahead of SONA would be “most unprecedented” and “highly unlikely”. Or, as Tsenoli put it: “I don’t see how that can happen… I’m ready to be clobbered by the presiding officers.” But Mbete nodded in agreement, saying: “There will be no sitting before SONA.”

The State of the Nation Address traditionally marks the start of the parliamentary calendar with pomp and ceremony, but it has been overshadowed by politics, heavy-handed security and disruption for the past three years.

In 2018 Parliament again finds itself caught in the political machinations of the broader body politic, and the manoeuvrings in the ANC. Although the governing party frowns at what it calls two centres of power, or the split between party and government leaders, right now that’s where it is: Zuma heads the Union Buildings, but does not hold any party position, while the country’s deputy president Cyril Ramaphosa was elected at the party’s December national conference to head Luthuli House.

The ANC National Executive Committee (NEC) lekgotla agreed in January that its Top Six officials would discuss his exit with Zuma – ANC Secretary-General Ace Magashule was widely quoted confirming this, but saying there was no deadline – and the matter emerged also at the ANC National Working Committee (NWC) when this smaller structure concerned with day-to-day operations met earlier this week.

The question of Zuma’s exit from government also followed Ramaphosa to the World Economic Forum (WEF) in Davos, Switzerland. South Africa was in a “transitional period”, he told CNN: “We’ve been given the mandate to engage with President Zuma to see how we navigate our way through this transition… We are looking at a variety of options.”

That a pushback is on emerged last weekend when Magashule told a KwaZulu-Natal ANC gathering that those calling for Zuma to step down were “factional leaders, who want to be populist” as his deputy Jessie Duarte told City Press that Zuma would stay in office until his term ended with the 2019 elections.

Within the parliamentary corridors there appears to be significant political ambivalence over Zuma delivering next Thursday’s SONA. The ANC parliamentary caucus is divided, and some among opposition parties are raising concerns that Zuma may just use SONA to tie government’s hands on programmes and projects. Daily Maverick is reliably informed that such concerns were raised at this week’s Chief Whips Form. Opposition parties are expected to meet on Tuesday; the meeting with presiding officers was postponed from this week.

Meanwhile, Parliament is moving on adopting rules for the removal of a president in line with Section 89 of the Constitution. While this had first been raised and dropped in 2016, in December 2017 the Constitutional Court ruled that the national legislature had failed to hold Zuma accountable in the Nkandla debacle, and gave Parliament 180 days to update its rules.

On Thursday the rules committee decided that party-political caucuses would have two weeks to discuss the preferred option – a multiparty committee of MPs to investigate, with the assistance of experts, the removal of a sitting president which the Constitution permits on a serious violation of the Constitution or the law, serious misconduct or inability to perform the functions of office. Such a committee’s decision would have to go for a vote in the National Assembly.

Once the rules committee makes a decision on this rule, and the National Assembly adopts it as anticipated before the end of March, there is another sting in the bow of those wanting Zuma to exit government ahead of the 2019 elections. Such removal from office also means the loss of any benefits.

Political dynamics aside, there’s also increasingly heavy-handed security and disruptions that have bedevilled SONA. Parliament was embarrassed in the 2015 signal-jamming saga – a junior operative was blamed for the oversight of leaving this machine on, according to State Security, while Parliament said it had not been fully briefed – and again in 2017 when soldiers with assault rifles were spotted amid the traditional ceremonial troops.

Co-incidentally, on Thursday it emerged that those four assault rifle-carrying soldiers were now before court. Mbete couched it very delicately: “There might have been an incident… That matter is now before court.”

In 2017, Mbete had handed the investigation into this incident related to soldiers in Parliament to Defence Minister Nosiwive Mapisa-Nqakula, who confirmed it was under way during that year’s SONA debate. “I have taken the allegations seriously and have started an investigation. When concluded I will report to the presiding officers,” the defence minister said.

Until Thursday there had been no official update on this investigation. It is parliamentary procedure and tradition to publish correspondence received by the Speaker’s office in the Announcements, Tablings and Committee Reports (ATC), the record of Parliament’s work. Mbete undertook to look into this.

Parliament’s presiding officers moved to allay concerns of yet another ham-fisted security overload, while emphasising that it would be in the discretion of the security cluster to make appropriate comments at the appropriate time following a series of meetings, including one with State Security Minister Bongani Bongo on Tuesday.

“We have raised very sharply that we do not want the security ministers, or whoever, to make security arrangements without consulting us. There will not be blocking of signals. We will not have (armed) army personnel in the precinct,” said Modise. “We will not allow any of the things that happened in the past three years.” DM

File Photo: National Assembly Speaker Baleka Mbete in the chair during a debate days after the president’s State of the Nation Address (SONA) at Parliament in February 2017. EPA/NIC BOTHMA