Scorpio: The Makwakwa Dossier, Part 4 – In order to help his No 2, Moyane contravened the FIC act 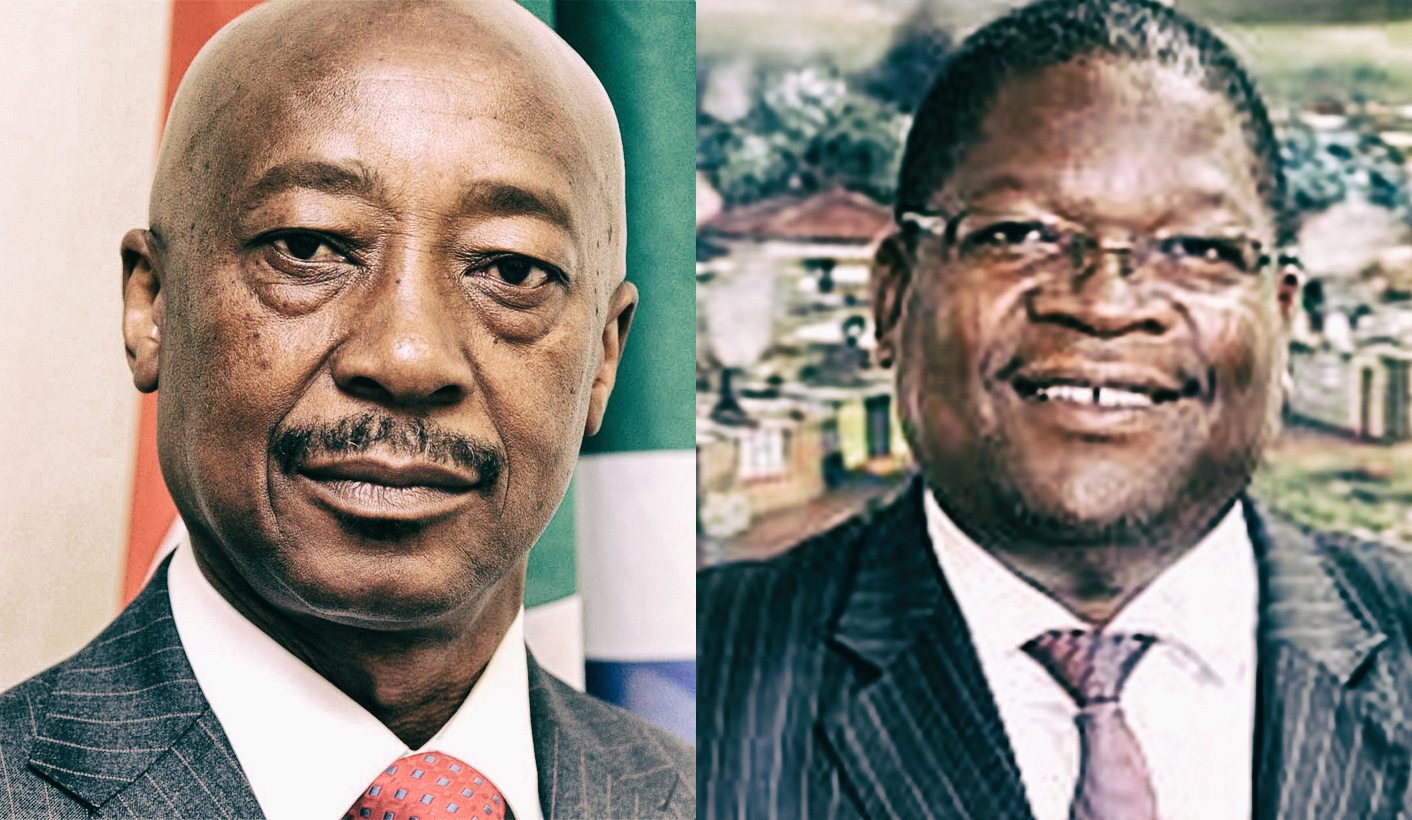 SARS boss Tom Moyane misused SARS in order to hustle information out of the Financial Intelligence Centre for the benefit and defence of his second-in-command Jonas Makwakwa, who stands accused of money laundering. Moyane also tipped off Makwakwa about the FIC investigation into his mysterious good fortune. This amounts to several serious contraventions of the Financial Intelligence Act. In accordance with the act, there are grounds for criminal charges against Moyane – something that might land him a jail sentence or hefty fine, experts say. By PAULI VAN WYK for SCORPIO.

While SARS top dog Jonas Makwakwa was still stuffing ATMs with hundreds of thousands of rand in cash (between 2010 and 2016), tax boss Tom Moyane illegally tipped him off about an ongoing investigation into the financial flows through his bank account.

This was Moyane’s first contravention of the FIC Act, but proved not to be the last.

The cause: The highly respected Financial Intelligence Centre (FIC) compiled a “suspicious transaction” report on Makwakwa’s good fortune and sent it to Moyane in his capacity as SARS Commissioner in May 2016. The FIC investigators dug up Makwakwa’s bank accounts dating way back to 2010 and found that over time he grew a “dependency on suspicious cash deposits and payments to maintain his current standard of living”.

Moyane illegally, and in contravention of section 40 of the FIC Act, disclosed the FIC report to Makwakwa.

A subsequent Scorpio investigation found that Makwakwa spent two to three times more than he legally earned from SARS between 2014 and 2016. During this period Makwakwa earned between R100,000 and R145,000 per month, after tax. Makwakwa has continuously refused to explain the origins of his good fortune.

The FIC investigation and report was however a tightly kept secret for about four months between May 2016 – when Moyane received the FIC report – and September 2016, when it all spilled out into the public. Since then Moyane has been accused by MPs in Parliament, former minister of finance Pravin Gordhan and the media of keeping a lid on the matter. But Moyane was forced to suspend Makwakwa, initiate an investigation and have an acrimonious meeting with Gordhan – all in less than a week after an amaBhungane exposé blew the lid off the Makwakwa debacle.

A highly annoyed Moyane has since explained his inaction as being misinterpreted. He testily told Parliament’s MPs, Gordhan and the media that he “didn’t do nothing” about the Makwakwa debacle, but “continuously communicated with the FIC” to obtain their “co-operation and guidance”.

Based on documents and letters between Moyane, Makwakwa’s lawyer and Gordhan, Scorpio can reveal that this is a half-truth.

On the contrary, Moyane misused SARS to act as a postbox for information Makwakwa needed to tease out of the FIC – information that could have remarkably bolstered his defence in legal proceedings against the FIC.

This was Moyane’s second contravention of the FIC act – a contravention he repeated in at least four letters to then FIC director Murray Michell, which Scorpio has seen. Moyane’s brazen and repeated misuse of SARS earned him a scathing letter from Michell (more on this in a moment).

The detail of what Makwakwa wanted from the FIC, but should have known he was not entitled to by law, is contained in a letter by his lawyer Liezel David, sent to Moyane on 10 August 2016.

David was tasked with answering the allegations in the FIC report on behalf of Makwakwa – allegations that Makwakwa should not have been aware of in the first place until an investigation has been finalised.

David opens her letter to Moyane with a request that before she answers any questions about the veracity and findings of the FIC report, “we need to ensure that [Makwakwa and his girlfriend Kelly-Ann Elskie] are treated with fairness”.

David continues later in the letter:

“Following studious perusal and consideration… and in terms of section 40(1)(c) of the Financial Intelligence Centre Act 38 of 2001 our clients request to be provided with the following additional information…”.

However, section 40(1)(c) states that no person is entitled to FIC information except an accountable institution or person. This especially excludes the person under investigation.

David therefore knew, and Moyane should have known, that David was not in a position to ask the FIC for anything.

So David turned to SARS, as the “accountable institution”, to act as a postbox and facilitate Makwakwa’s questions.

From the questions listed in David’s letter, it becomes clear that she intended questioning the FIC’s procedures and investigators who compiled the report on Makwakwa. The questions seem composed to attack the FIC report on an extremely technical basis. No mention about the merits of the case is made.

In a stunningly inappropriate move, David also asked “whether the FIC has in the past 3 years received any report concerning any suspicious transaction involving a SARS employee(s)…”

By law, neither Makwakwa nor David are entitled to any information the FIC may have reported about any other employee.

FIC director Murray Michell refused to provide any of the information David asked from Moyane. It caused a public fight between the two institutions. (More of this later.)

To gain further expert knowledge of the parameters of the FIC act, Scorpio has consulted with four lawyers from the forensic investigation departments in four big legal firms.

The lawyers spoke to Scorpio on the basis of anonymity, because they represent SARS or act against SARS, and described the leadership as having become “vindictive” in their approach over the past four years.

Each of the lawyers raised their eyebrows at the questions posed by David.

“David is certainly entitled to ask these questions, she has to defend her client to the best of her ability and one can’t criticise her fishing for information,” one attorney said.

“But SARS and Tom Moyane should not have entertained it. It is a definite and very serious contravention of the FIC Act.”

Another attorney said David’s questions were a “gamble” and “improper”, and that Moyane “should’ve told her off”.

Days after Makwakwa’s suspension, on 19 September 2016, Michell fired off a letter to Moyane:

“I am gravely concerned about the approach followed by SARS in the pursuit of this [Makwakwa] matter. It is clear to me from the content of your letter…that the [FIC report] was made available to the subjects of the referral, Mr Makwakwa and Ms Elskie… “

Murray referred here to Moyane’s first contravention: Making the FIC report available to Makwakwa and Elskie in May 2016.

Murray continued: “The FIC has been providing SARS with financial intelligence since 2003. SARS’ employees are well aware of the access, handling and terms and conditions of the use of such sensitive information. I must point out that the conduct mentioned above constitutes a serious criminal offence…”

Michell further tore into Moyane’s conduct, saying that David and Makwakwa are not entitled to any information relating to the FIC report:

“It is the FIC’s experience that SARS does not give affected taxpayers copies of informer information when people blow the whistle on an errant taxpayer – a practice that would amount to ‘tipping-off’ the taxpayer as to the possibility of a pending investigation against him or her… Against this background it should be clear that the legal representatives of Mr Makwakwa and Ms Elskie are not entitled to receive any of the information they had requested and providing them with any such information would exacerbate the contraventions of the FIC Act which have already occurred.”

David took a gamble in an effort to reinforce Makwakwa’s case, and were it not for the FIC, she would have succeeded. According to the lawyers Scorpio has consulted, David would have been entitled to use any information gained, even if it was obtained illegally.

Michell ended off his letter by saying the reliance of David on the FIC act to hustle information from the FIC is “hopelessly ill-conceived”. Michell also recommended an investigation into the “gross mishandling” of the FIC report by Moyane’s office.

As is Moyane’s habit, he did not take kindly to the rebuke. He complained about Michell to Gordhan and lambasted him for not “co-operating” with SARS in the media. What Moyane did not do, obviously, was to initiate the investigation of the “gross mishandling” of the FIC report by himself.

David, on behalf of Makwakwa, declined to publicly discuss the questions posed to them. Makwakwa did however repeat that the FIC report’s “adverse comments” were “unwarranted”.

After repeatedly promising answers to Scorpio’s questions this week and missing two deadlines, SARS did not reply to a single question about the matter. For our readers’ benefit, Scorpio includes our questions to Moyane that went unanswered. We further include questions to Makwakwa, as well as David’s response in full.

It seems that Moyane is covering for his own wickets – a probable indication of why he repeatedly batted away harsh questions from MP’s in Parliament’s standing committee on finance towards the end of last year.

Corruption Watch laid criminal charges against Moyane, Makwakwa and Elskie in December. Outa has also called for action against Moyane. It remains to be seen if the Hawks’ newly grown backbone does not only extend to the Guptas. DM