House of Cards: SARS’s 9/11 as pack comes tumbling down in probe of suspicious deposits 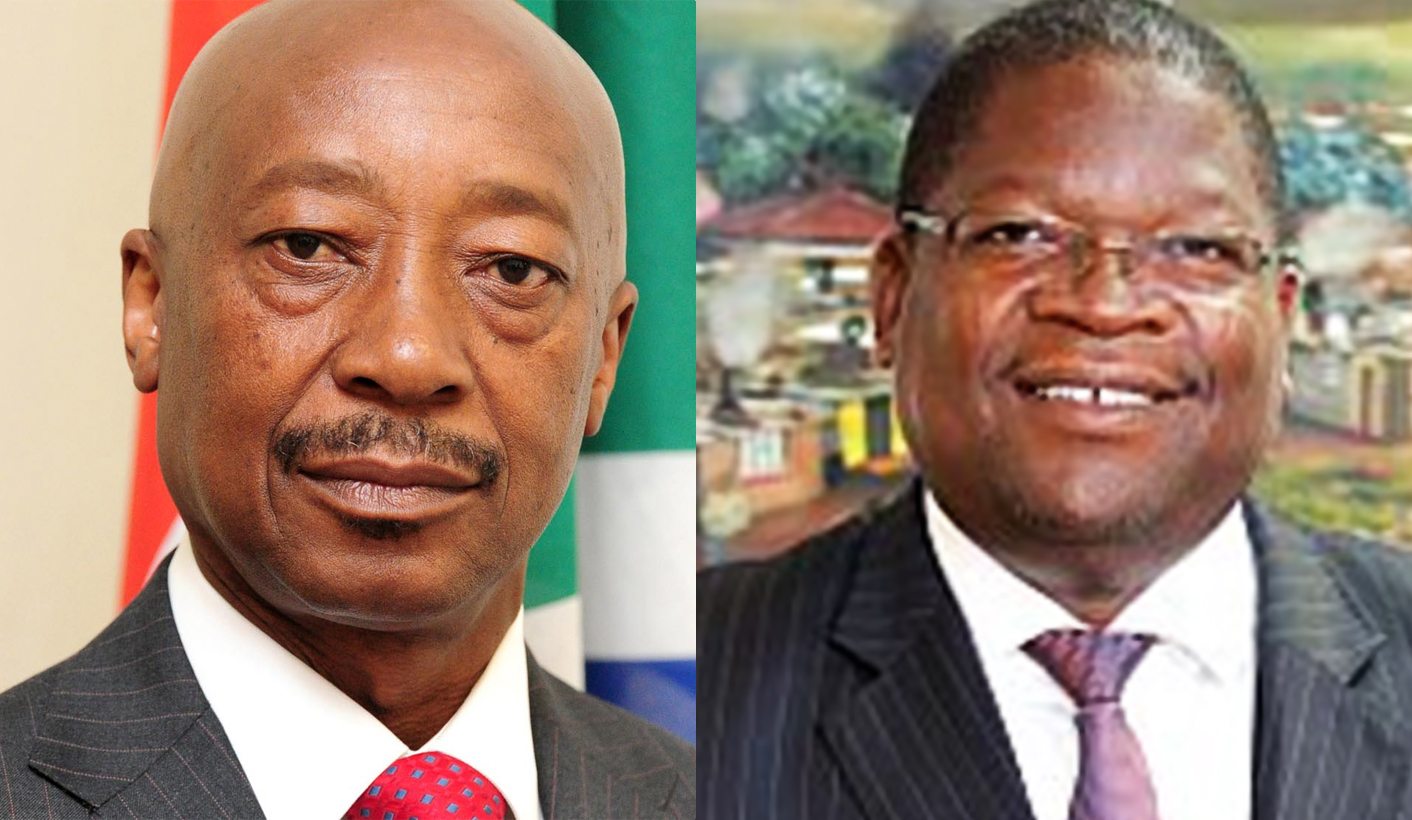 SARS Commissioner Tom Moyane and Hawks head Lieutenant-General Mthandazo Ntlemeza have known for more than three months about the alleged criminal behaviour of Jonas Makwakwa, the second most senior member of the SARS executive, who has reportedly been caught by ATM cameras feeding wads of cash into his personal account as well as receiving other deposits amounting to at least R1.2-million. Daily Maverick is in possession of a report by a banking regulator that suggests these “suspicious and unusual cash deposits” into the personal accounts of Makwakwa and his girlfriend Kelly-Ann Elskie be investigated. Yet the Hawks claim this is an “internal matter” at SARS. By MARIANNE THAMM.

The confidential report states that Makwakwa and his girlfriend Elskie, the mother of at least two of his children and also a SARS employee, might be involved in or facilitating corrupt activities and may be guilty of living off the proceeds of crime or be involved in money laundering and that this be investigated “in order to institute appropriate criminal justice action”.

Makwakwa, Moyane’s perceived “hatchet man” at SARS, had been placed in control of the Large Business Centre – a key revenue division of SARS that deals with high-net worth individuals and corporate tax – as part of the commissioner’s move to restructure the revenue service. It is a mission Treasury and Finance Minister Pravin Gordhan have repeatedly asked Moyane to freeze, instructions which he has repeatedly ignored.

However, revelations in the report that Makwakwa is linked to several suspicious and possibly highly illegal financial transactions might just prove to be Moyane’s personal 9/11.

The bombshell hit on 11 September when the amaBhungane centre for Investigative Journalism revealed in a report in the Sunday Times that a banking regulator had picked up, some time ago, several suspicious bank transactions related to Makwakwa and Elskie.

“The volume and value of cash deposits are highly unusual as MJM [Makwakwa] is permanently employed. These aforementioned cash deposits should be investigated to determine whether these funds …  received by this SARS employee constitute payments of proceeds of crime arising from corrupt activities as defined in the Prevention and Combatting of Corrupt Activities Act 12 of 2004, in light of the position of authority held by MJM. The exchange of foreign currency should be investigated to establish if there were exchange control contraventions in this transaction,” the statement from the banking regulator reads.

“MJM’s [Mashudu Jonas Makwakwa’s] personal bank account is the primary account used to receive and disburse funds. Credits into this account have increased yearly from R1,358,817,01 in 2010 to R3,418,925.24 in 2015 (approximately 15 %). Likewise, MJM’s payments have grown over this period, creating a dependency on suspicious cash deposits and payments to maintain his current standard of living. These payments and cash deposits are of concern as they originate from unknown sources and undetermined legal purpose,” reads the report.

It is clear from the report that while the Hawks were hounding Gordhan in a very high profile and public manner, Ntlemeza was more than aware of the evidence against Makwakwa and Elskie that had been collected – and did nothing. Some of the evidence was from cameras installed at various ATMs.

Moyane is believed to have signed for the receipt of the full report on Makwakwa on 17 May. Moyane is also believed to have met with Ntlemeza on 29 August 2016. On 31 August Makwakwa was presented with a written notice of SARS’s intention to suspend him. He was given seven days to present reasons why he should not be suspended. He still remains in his position and is the second most powerful individual at SARS.

Insiders say the fact that Makwakwa has not yet been suspended presents the danger that “he can easily interfere with any investigation into his affairs” and is “the only official on the SARS Exco with some knowledge of tax or the institution itself”.

Hawks spokesman Brigadier Hangwani Mulaudzi on Sunday told Daily Maverick that “we are not investigating the matter. I assume it is an internal matter and for further details please contact SARS”.

SARS had not responded to questions from the Daily Maverick at the time of writing.

DA Shadow Minister of Finance, David Maynier, said Moyane had been questioned during a parliamentary standing committee on finance meeting on 23 August about the Makwakwa matter but had been “evasive and simply stated that he would not ‘comment on ongoing investigations’”.

Follow-up questions, said Maynier, had been referred to senior revenue service officials who “were equally evasive” and repeated that they had no “comment to make on current investigations into individuals or companies”.

These payments, said the regulator, “should be investigated to determine whether there were any misrepresentations or fraud on the part of MJM that resulted in SARS making these payments”.

“The deposits were made over three consecutive days into three different branches of the same bank, all located within an approximate 10km radius.”

The sources of these funds were unknown and the value “suspicious and unusual considering the financial profile of KE”.

She allegedly used these proceeds as well as the proceeds from another property to buy new property. The transactions should be investigated, said the banking regulator, to determine “whether the aforementioned conduct, concealment and disguising of the true source of these funds constitute acts of money laundering”.

The banking regulator also uncovered a series of transactions it has labelled “suspicious and unusual payments” and relating to the Department of Water Affairs and Forestry and a deposit of R17,872,957.13 into the account of a company, New Integrated Credit Solutions – a debt collection company formerly contracted to SARS.

This total was then moved in a series of payments to five different companies, Mafube Payment Solutions, Arvomark, Street Talk Trading 181, Biz Fire Worx (where Makwakwa was a previous director) and to Mercedes Benz Financial Services. The last payment is believed to have been for a Mercedes Benz C220 BLUETEC for Kelly-Ann Elskie.

New Integrated Credit Solutions had been subcontracted with Mafube to analyse debt data for SARS.

The sensational revelations come after Gordhan’s statement that President Jacob Zuma’s close friends and associates, the Gupta family, should turn to the country’s courts if they felt they had been treated unfairly by the country’s banks which had refused to do business with them. It is believed the country’s big four banks had been “uncomfortable” with some of the transactions in accounts held by entities linked to the family and that they (the banks) were required to report suspicious and unusual transactions to the Financial Intelligence Centre.

It is has not been confirmed at this stage whether the alert to the funds in Makwakwa and his girlfriend’s accounts have any link with the Gupta family.

It was Tom Moyane who in March 2015 lodged a complaint with the Hawks about an apparent “rogue unit” and that has led to the very public hounding of the Minister of Finance as well as several other former members of the SARS executive including Deputy Commissioner Ivan Pillay and group executive, Johann van Loggerenberg. The former SARS members, as well as Gordhan, were recently all ordered to present themselves for “warning statements” at the Hawks headquarters in Pretoria. News that the Hawks were still hounding Gordhan sent the rand into yet another tailspin from which it has not yet quite recovered.

In December 2014 the entire former SARS Exco was driven out of the revenue service after untested allegations emerged in a series of Sunday Times stories about an illegal “rogue unit” that had operated at SARS and that had been established during Gordhan’s tenure as commissioner.

With regard to the complaint Moyane had lodged, Gordhan said that the question everyone should ask was “why?”.

“Since then we have had a newspaper [the Sunday Times] that carried out an 18-month campaign against certain individuals. At the end of the 18-month period that newspaper had apologised for what it had done because it didn’t have proof for some of the stuff that it was accusing people of. As we sit today, what is the problem? Who is accused of what? What motivates it?”

The revelations by the banking regulator of Makwakwa’s alleged criminal behaviour could be a tipping point that results in the collapse of the entire House of Cards that has been constructed around SARS, with a ripple effect on the Hawks, the National Prosecuting Authority and ultimately Zuma. It is only a matter of time before the edifice must crumble and those behind it be exposed. DM