AU’s 30th Summit: A continent in a search of a common future 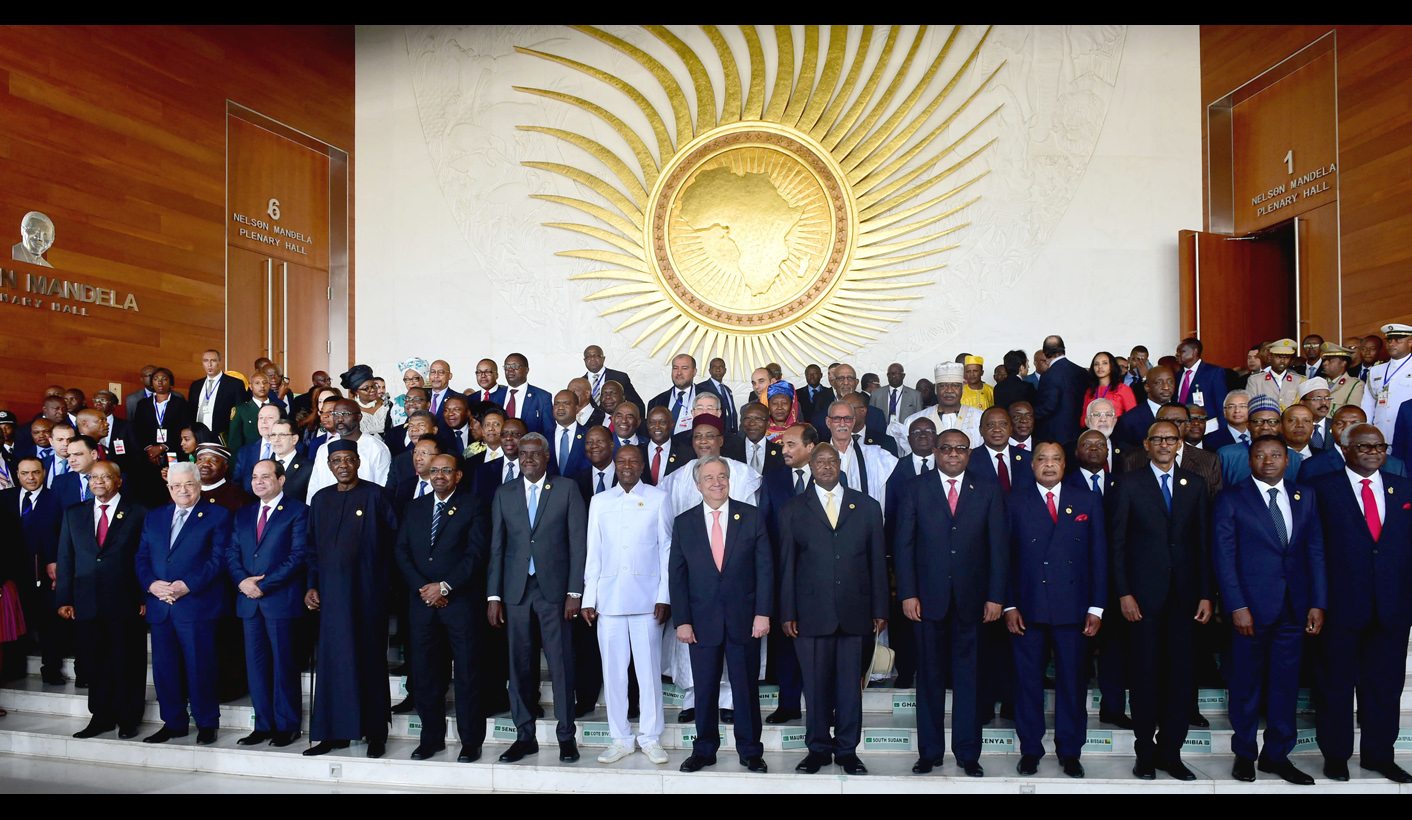 Leaders from the 55 African Union member states were locked behind closed doors for most of what felt like two very long days in Addis Ababa during the continental body’s 30th summit. There were discussions about the foul remarks by United States president Donald Trump, borderless travel, migration, corruption, and peacekeeping – and all the while, were the Chinese eavesdropping on all this? By CARIEN DU PLESSIS.

You could tell former African Union Commission chairperson Nkosazana Dlamini Zuma was no longer around. Three hours after the scheduled start time of 11:30 on Sunday, the opening session of the AU summit kicked off. She, on the other hand, was a stickler for time-keeping.

In Addis Ababa, residents are seemingly used to the massive traffic jams that gridlock roads in the city, caused by road closures in order to allow heads of state free movement. You’d think they’d start on time.

Early talks at the summit were overshadowed by remarks made by US President Donald Trump referring to African countries as “shitholes”, and also the move of the US embassy in Israel from Tel Aviv to Jerusalem.

“The continent is deeply shocked by the message of hatred and the desire to marginalise Africa,” AU Commission chairperson Moussa Faki Mahamat said at the opening of the summit of ministers, which preceded the recently concluded heads of state summit.

“The statements on Jerusalem, a reduction of contribution to a peacekeeping operations budget – the continent cannot keep quiet about these,” he declared.

By the end of the summit, however, the continental body seems to have mellowed a tad. Trump had sent the AU a letter wishing them all the best with the summit, and promising a visit by foreign secretary Rex Tillerson soon. Whether that will be followed by more money for peacekeeping in Africa or the appointment of ambassadors to African countries (there are still more than a dozen vacancies, including in South Africa), remains to be seen.

Rwandan president Paul Kagame, who is AU chairperson this year and who met with Trump just before the AU summit at the World Economic Forum in Davos, was businesslike about it.

He told a press conference after the summit that his Davos meeting was with the president of the US, rather than Trump per se:

“When the US decide to give us Trump as their president, we deal with that president of the US. It’s not whether you appreciate him for this or that, it’s a job he’s doing for his country, and it’s a job I’m doing for my country, but this time I was doing the job for the continent,” he declared.

The official summit declaration is yet to surface, so it’s hard to say whether his colleagues agreed. Kagame, at least, thought there was still some good collaboration left between the US and Africa.

Behind closed doors, leaders continued with their agenda. A protocol on the free movement of people (or travelling with fewer visa restrictions) was signed, and Kagame announced a special summit in Kigali in March on the Continental Free Trade Area (the AU is close to adopting it, apparently).

There is also the Single African Air Transport Market, a flagship project of Agenda 2063, which could change the lives of ordinary travelling people by making it easier to fly on the continent (and not via France to connect to neighbouring countries).

Migration was on the agenda too, and Mahamat was proud to announce that the AU worked closely with the European Union and the United Nations to repatriate illegal migrants and save them from the kind of abuses reported in Libya last year. Almost 13,000 had been returned home since the AU-EU summit in November 2017.

Morocco’s King Mohammed VI was appointed to champion the cause. Only a year ago Morocco was in Addis to lobby African countries to accept it back into the organisation. The Moroccans have now become full participants in the summit, making themselves visible with a huge exhibition at the building’s entrance to show the good they’re doing in the continent. The resentment might still be there, but not much appears to have been said about Western Sahara at the summit and nobody pushed each other either, as happened to a Japan-Africa summit last year when both countries were present, too.

On the peacekeeping front, the aftermath of the civil war in South Sudan featured high, as usual, with Mahamat saying the AU wanted sanctions to be considered. High-level meetings by regional leaders have become a regular feature of AU summits, as has the breaking of any agreements within 24 hours of them being made.

“There is death in that country. It is unacceptable that we remain with arms folded,” Mahamat said.

Several leaders at the opening session also paid tribute to former South African president Nelson Mandela, who would have celebrated his 100th birthday this year. The main plenary hall in which they met was named after him.

They were less generous with their actual show of support for the launch of worldwide celebrations, however, when on Saturday night the lavish dinner hosted by President Jacob Zuma for this purpose was half empty.

Power has a way of slipping very quickly, and most present at the summit considered Zuma to be on his way out. It is, however, seen as a coincidence that this year’s summit theme was “winning the war against corruption”. It was championed by Nigerian president Muhammadu Buhari, who was good at winning wars on this in the ‘70s, but his frailty made you wonder if he had any fight left in him.

At least he stayed till the bitter end of the summit, unlike Zuma (who, incidentally, was also not present for the anti-corruption speech), who had a commercial flight to catch and left five minutes before the very late closing ceremony.

Whether the Chinese furtively tapped in on it all remains a mystery. Le Monde reported just before the summit that China not only gifted the AU a fancy new headquarters, but also filled the computer systems with bugs.

Without denying the actual spying, Chinese ambassador to the AU, Kuang Weilin, angrily told a gaggle of journalists there that the report was “sensational” and “preposterous”. He questioned the timing – just before the summit. The French always end up the ones being accused of agendas in these parts.

Mahamat said he’d not seen any signs of being spied on, and any worthy institution wouldn’t need to spy anyway.

Kagame, who invited more media questions at the summit’s final press conference as a means of burning calories, responded coolly.

“I don’t think there is anything done here that we don’t want people to know,” he said. “If the Chinese want to read documents that we are writing, it’s not a problem.”

Kagame said everyone was playing the game anyway (and he would know):

“I don’t think spying is the speciality of the Chinese, we all have spies all over the world.”

He did wish, however, that Africa had built the headquarters itself, without having had to rely on outside help to do so. Even in controversy, Kagame sticks to script, this one being that of the AU reform process he’s championing. Among others, it aims to get African countries to fund most of their own continental organisation with a 0.2% levy on imports. South Africa, for one, put up a rather nasty fight on the matter for reasons not entirely clear to everyone.

Perhaps it was just the last kicks of the current administration. DM

Photo: A handout photo made available by South Africa’s Government Information Services (GCIS) shows heads of state in posing for the family photograph during the 30th Ordinary Session of the Assembly of Heads of State and Government of the African Union (AU), Addis Ababa, Ethiopia, 28 January 2018. EPA-EFE/KOPANO TLAPE