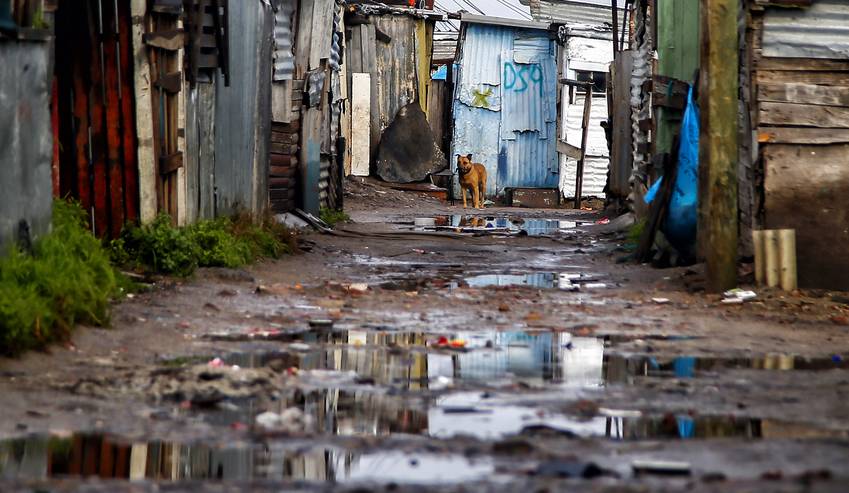 Oxfam should be praised for continuously alerting the global public to the threat that rising inequality poses to social and political stability. By REKANG JANKIE, CARILEE OSBORNE and MICHAEL NASSEN SMITH.

In the context of the World Economic Forum’s annual meeting at Davos, Switzerland last week, Oxfam released and presented their 2018 report on global inequality. In response to this, the Free Market Foundation (FMF) has advanced a number of contestable claims relating to the impact of “free enterprise” on “the poor”. These include the notion that those living in poverty stand to gain from the swelling of the ranks of billionaires. We believe that it is in the public interest to place the FMF’s assertions under scrutiny and thus evaluate these in turn below:

This is a claim made repeatedly by the foundation and conservative economic commentators in South Africa. The FMF instructs us to believe that any form of state intervention would frustrate the aims of eradicating inequality and poverty. However, the historical record provides numerous examples to the contrary. One could refer to Brazil’s Bolsa Familia, South Korea’s developmental state, and the thriving social democracies of Scandinavia. In addition, Ha-Joon Chang has argued persuasively that the wealth of modern Western economies is based largely on state initiative and the promotion of national industries through tariffs and subsidies. To which we could undoubtedly add lucrative state-backed colonial and imperial enterprises.

Fortunately, in Africa, we are blessed with ample evidence that the structural reforms and liberalisation that the FMF would presumably support fail when implemented.

The FMF does not dispute the swelling ranks of the billionaire class. Instead, they claim that the creation of billionaires is something for which the poor should be grateful. Such a view is particularly concerning given that it is now widely accepted that a belief in “trickle-down” theory is unsustainable. Even the International Monetary Fund has signalled the dangers of unequal growth, with Managing Director Christine Lagarde warning the World Economic Forum about this in 2013.

There is indeed little evidence that the creation of billionaires translates into greater prosperity for the poor, particularly when wealth is predicated on inheritance transfers, cronyism, tax avoidance, the suppression of wages and deteriorating work conditions. Moreover, wealth created through entrepreneurial ingenuity and innovation does not necessarily translate into broad social benefit. For example, increasing automation places workers under threat of losing their jobs or, at best, limiting their already fragile bargaining powers. Recently, Forbes reported that Jeff Bezos made $2.8-billion in one day after his company introduced technology that eliminated the need for cashiers. While the business press lauds Bezos’s entrepreneurial spirit, should we not consider the social impact of the job losses that result?

While abstract and context-less undergraduate economics courses might assume perfect mobility of labour, in reality workers are unlikely to be able to shift work in time to stave off the effects of poverty. Moreover, as capital accumulation in general becomes less reliant on labour intensive industries, the opportunities for alternative work becomes scarcer.

Nowhere in Oxfam’s report is there a direct call for the reduction of wealth. Rather, Oxfam proposes a fairer distribution of wealth. The FMF sets up a false dichotomy between concern for the poor and prosperity of the wealthy. This is an attempt to dodge the substantive issue raised by Oxfam, namely, that a significant portion of wealth is being created unfairly and at the expense of the poor and working class. To ignore this relationship between the rich and the poor is at best an oversight and at worst purposeful intellectual dishonesty.

It is a strange choice to use the US as an example of a welfare state given the limited provision of healthcare, public higher education or social safety nets in that country. The use of nominal figures by the FMF obscures how little is spent on such provisions relative to GDP and in comparison to other advanced industrial countries.

A sound analysis of welfare states and their impact on poverty would involve comparing the relative social spending of the US and states in the OECD. In the US public social expenditure is 19.3% of GDP with poverty levels at 16.8%. In comparison, the average OECD public social expenditure is 21% of GDP with an average poverty rate of 11.59%. The difference is far greater when one compares the poverty rates in the US with social democracies like Denmark (5.5%), Finland (6.3%), Norway (8.1%), Sweden (9.2%) and to a lesser extent the UK (10.9%) and France (8.1%).

These are all countries that have significantly higher public social spending than the US and have subsequently managed to achieve lower poverty rates. The FMF and its supporters might wish to look at the responses by many Norwegians to Donald Trump’s recent query as to why the US was not encouraging more immigration from that country.

Additionally, wages in the US are often so low that even those employed need to receive welfare cheques in order to survive, often while working double jobs or multiple shifts. For example, Walmart employees receive a total of $6.2-billion in welfare payments. Similarly, as a Bloomberg report shows, Amazon in Ohio receives a number of subsidies that are putting public services under strain. This is indicative of how the US state has to step in to account for market failures created in a liberalised economy where capital has such overwhelming power over labour. The Walton family, owners of Walmart, have a combined net worth of $130-billion, while Jeff Bezos, the owner of Amazon, is the wealthiest person in the world. It’s clear that the mere existence of these wealthy people has not lifted many of their employees out of poverty.

In the conditions of the market economy, one is compelled to sell one’s labour in order to survive. If this compulsion is what the FMF means as “without force” then the phrase surely loses all meaning. As Professor of Sociology at New York University, Vivek Chibber, lays out in the Jacobin debate with Reason, “there is no choice in capitalism whether or not you can go to work.” Without the provision of basic goods and services outside of the market, workers’ “choice” hinges on survival, in which case the word holds meaning only in its most narrow sense. This claim also sidesteps Oxfam’s report that as many as 40 million people still work under conditions of slavery, figures backed up by the International Labour Organisation.

We have already disputed the claim that wealth has been created for the poor. However, it might be worthwhile to quote the following statistic to underscore the point: “Billionaire wealth has risen by an annual average of 13% since 2010 – six times faster than the wages of ordinary workers, which have risen by a yearly average of just 2%.”

FMF president Leon Louw references the large numbers of immigrants entering Europe as proof that the poor are fleeing welfare states to those who embrace free market principles. This is patently false. The vast majority of refugees entering Europe come from Syria, Afghanistan and Iraq. These are countries that hardly subscribe to the social democratic vision that Oxfam advocates. On the other hand, the countries where refugees are fleeing include Norway, Sweden, Germany, the UK, France, all countries with long traditions of welfare provision and social democracy to varying degrees. Greece, where many refugees are currently living, has a radical leftist party in power. Describing a choice to flee civil war, terrorism and violence for relative safety as a choice between socialism and free-market is just dishonest.

Overall, the FMF dismisses the Oxfam Inequality Report on flimsy grounds. Oxfam should be praised for continuously alerting the global public to the threat that rising inequality poses to social and political stability. In the most unequal society in the world, South Africans should pay attention to their message and not be distracted by baseless assertions propagated by those pretending to care for the poor. DM

The authors are employees at the Institute for African Alternatives, publisher of the New Agenda: South African Journal of Social and Economic policy