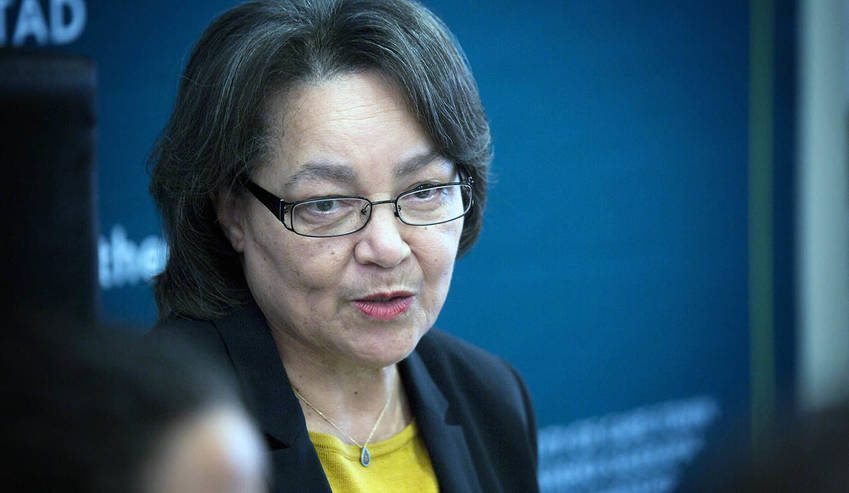 On Monday, Daily Maverick revealed that the DA is at least looking to partly blame Cape Town Mayor Patricia de Lille for the city’s ongoing water crisis, with the party describing the mayor’s focus as “elsewhere” and her messages about water unclear. De Lille is not taking this lying down. In an interview with Daily Maverick on Tuesday, she laid out exactly what has been done on the water front – and says that the DA was kept informed at every step. By REBECCA DAVIS.

“I spend 80% of my day on the water crisis,” says Cape Town Mayor Patricia De Lille.

She’s responding to the claim by DA federal executive chair James Selfe, made to Daily Maverick, that De Lille’s focus was “oftentimes elsewhere” when it should have been on making sure Cape Town doesn’t run out of water.

“I start with [the water crisis] first thing in the morning. I’m out in the field with it, because I believe we need to show Capetonians what we are doing. I work 16 hours a day. My family say, ‘Must I always lock up the office?’”

De Lille is clearly frustrated by the DA’s claim that she has been insufficiently committed to the water crisis, but on Tuesday she was also careful not to say too much while matters are legally still up in the air.

Between De Lille and the DA, however, one might say that De Lille has won the first round.

On Sunday, DA leader Mmusi Maimane released a statement in which Maimane said that the party wanted De Lille removed from managing Cape Town’s water crisis immediately, and advised that a resolution to this effect would be brought to the DA caucus in the Cape Metro.

Since De Lille has no intention of handing over the reins to Cape Town’s water response, she consulted the City’s legal services. They came back with a legal opinion – seen by Daily Maverick – which vindicates the mayor staying put. It says that Maimane’s recommendation to the DA caucus that De Lille be removed from water management amounts to a violation of the Local Government: Municipal Structures Act, and describes Maimane’s proposal as “concerning”.

De Lille says that she has sent the legal opinion to James Selfe but has yet to receive a response.

In the interim, however, the mayor and her team are not sitting back. De Lille provided Daily Maverick with a 15-page document outlining her approach to Cape Town’s water crisis and the measures implemented thus far.

In the document, De Lille is presented as being at odds with some of her colleagues in the City of Cape Town over the water crisis from the outset.

In early 2017, she records, “national government and many of our own officials did not believe we were at crisis stage and remained of the view that water restrictions, and later reducing the water pressure, remained the best intervention that would see Cape Town through until the winter of 2017 when rains were expected”.

Furthermore, the report continues, “many City officials did not see that climate change was introducing more uncertainty into our water supply and planning models”.

De Lille does not name the relevant City doubters, but says she repeatedly asked them for plans to address Cape Town’s water shortage. She also “continuously reminded” and “constantly advised” officials not to rely on rainfall to fill up dams.

By the end of October 2017, De Lille’s timeline records that she had become concerned that “the Water Resilience Plan had not been moving and the responses to my questions on updates from the water task team became increasingly worrying”.

As a result, she stepped in more directly, leading daily meetings with officials responsible for water augmentation projects.

De Lille complains that among other City officials, the emphasis was less on “limiting the financial impact [of the water crisis] on the poor and working class” and more on the setting up of a water “war room”.

She writes: “Instead of receiving substantial feedback on the actual delivery of water and commencement of projects, senior project managers spoke about desks and other office furniture needed for the war room and the costs to set it up.”

Chief Resilience Officer Craig Kesson – who was the instigator of complaints against De Lille – comes in for implied criticism for having been on study leave over October and November 2017 despite ostensibly heading up the water task team. Kesson eventually stopped attending the meetings, De Lille writes.

“Despite this, under my leadership, I have continued to lead the senior management team to ensure that we address obstacles and remain focused,” the mayor records.

Other frustrations beset De Lille’s path. She writes that from February 2017, she petitioned Cape Town’s water department to restrict households using excessive water “and was told that in terms of the City’s water by-law this was not possible”.

De Lille was met with “resistance and refusal” on this score for “several months”, before eventually persuading water officials to install water management devices in high consumption households in July 2017.

When it comes to augmenting Cape Town’s water supply, the mayor says that she has pushed in favour of groundwater extraction because it is a quarter of the cost of desalination and takes less time to implement.

“Groundwater is the key immediate, and cost-effective, option for navigating this crisis,” writes De Lille.

The mayor says that as a result of her evident commitment to the water crisis, both the media and the Cape Town public have come to applaud her leadership.

“Based on the media coverage and my social media channels, it would be fair to say that I am the most active political leader in terms of the water crisis,” De Lille writes.

In person, she told Daily Maverick: “I certainly don’t believe that we have failed, considering that this is the worst drought in 100 years, and how you have to mitigate this drought within the framework of legislation.”

De Lille stresses the fact that she has given the national DA frequent reports, both written and verbal, on the management of the water situation.

The mayor says she will continue to drive Cape Town’s water management until there is a firm legal decision to the contrary.

Her report concludes with a warning.

“Given the complexity of the water crisis and the great amount of work that has been done and achievements under my leadership, any change in leadership would have severe negative impacts on the progress that has been made, least of all [sic] on the public perception which needs to be precisely managed on a daily basis,” De Lille writes.

“I say this because my intricate knowledge of the City from my past six years as the mayor, experience and learnings from addressing the water crisis head-on in recent months should be seen as extremely valuable, and any disruptions would lead to a regress in dealing with the water crisis which the City of Cape Town, the Democratic Alliance and especially the people of Cape Town can ill afford.” DM