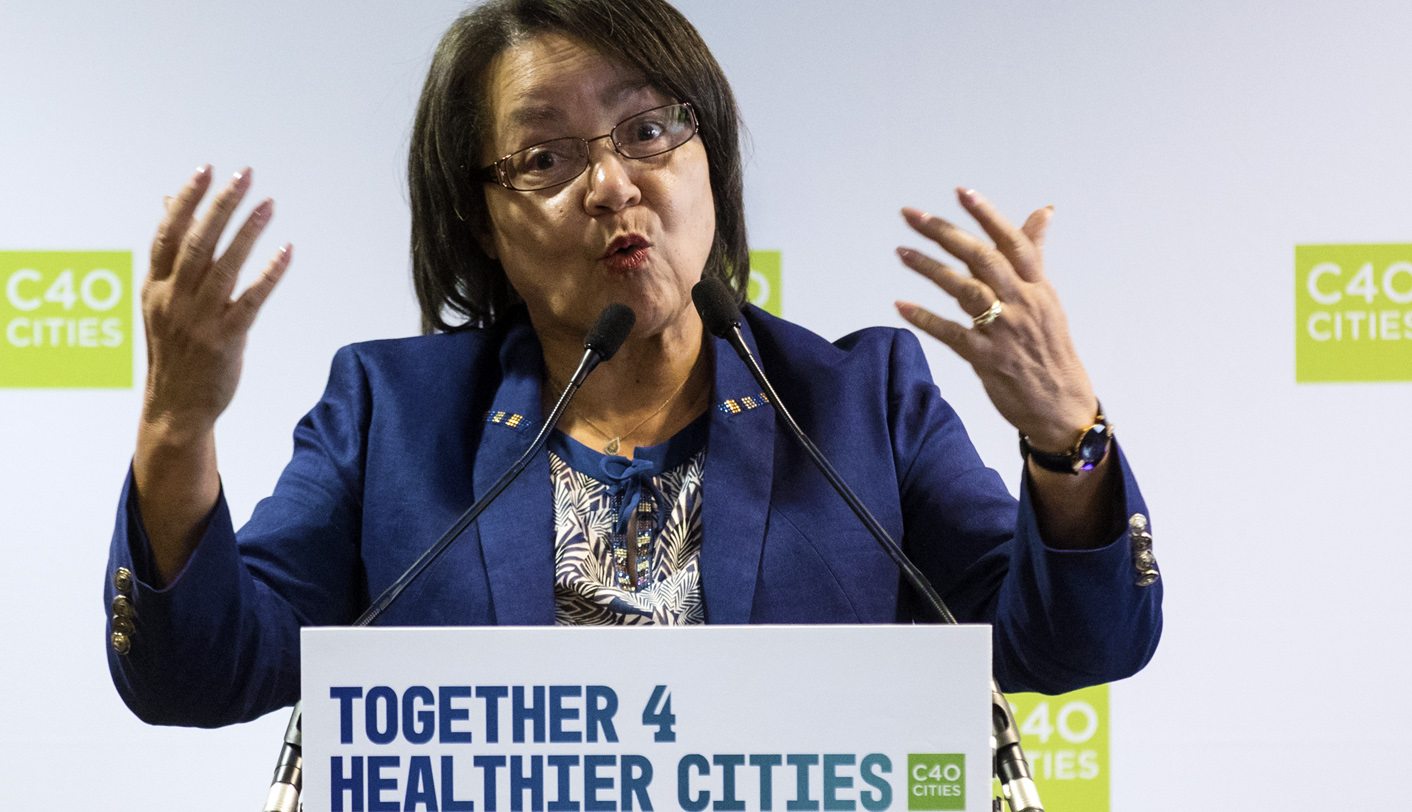 There are few events in South Africa that don’t get turned into a political football, and the Cape water crisis is no exception. Announcing on Sunday that Cape Town Mayor Patricia de Lille would be formally “charged and investigated”, the DA said the party wanted De Lille removed from the city’s response to the water crisis immediately. Whatever the validity of the other allegations against De Lille, it seems certain that the mayor is about to become the number one scapegoat of the water crisis. By REBECCA DAVIS.

Who is currently in charge of the City of Cape Town’s response to Cape Town’s water crisis?

If you ask Mayor Patricia de Lille, it is very much still her. De Lille was filmed by TV news cameras on Monday arriving to work at City Hall prominently wearing her mayoral chain, and announcing that she was going straight in to chair a drought relief meeting.

But on Sunday, a statement by DA leader Mmusi Maimane said that the party wanted De Lille relieved of her water-related responsibilities immediately.

The DA, Maimane said, will “bring a resolution to Council that removes the Mayor from any role in managing and directing the City’s response to the prolonged drought” while other political charges against De Lille are being investigated.

When Daily Maverick contacted De Lille for clarification on Monday, the mayor appeared to be opting to ignore the DA’s views in this regard for now.

“I am carrying on with all my work as usual and focusing on the water crisis,” De Lille said. “I have not received official notification from the party. I am continuing with my normal duties.”

Mayor De Lille stands accused of eight charges of “governance failures”, for which she will now be investigated by the DA’s Federal Legal Commission. They include two counts of improperly trying to influence the appointment of top City officials, three counts relating to irregularities around a MyCiTi bus project, one count relating to irregularities around the Foreshore Housing Project, and two counts of behaving autocratically in her interactions with the City of Cape Town caucus and colleagues.

At least ostensibly, none of De Lille’s charges directly relates to the Cape water crisis. Yet it was specifically the water crisis that Maimane targeted in his Sunday statement as requiring removal from De Lille’s purview immediately.

The DA is seemingly happy for De Lille to continue with other mayoral tasks during the investigation against her; but not the City’s water response.

The justification given for this in Maimane’s statement was that the party requires “unity of purpose and cohesion” in the City of Cape Town to tackle the water crisis effectively. But is there more going on behind the scenes?

Daily Maverick asked DA federal executive chair James Selfe why it was considered so important to take De Lille off the water issue if the charges against her are unrelated to that aspect of her governance.

“The Mayor is by definition distracted now in defending herself against the charges she faces,” Selfe responded. “The seriousness of the water crisis requires one hundred percent singular focus and daily management. The party wants to see the City get through the drought period without ever reaching ‘Day Zero’. We must act to ensure that the required level of management does occur.”

Selfe effectively confirmed, however, that the DA believes that De Lille has endangered the City’s water response.

“The Mayor’s focus has oftentimes been elsewhere,” Selfe said.

In Maimane’s Sunday statement, the DA leader said that the party wanted to see current Cape Town deputy mayor Ian Neilsen, and Cape Town water tzar Xanthea Limberg, take control of the water crisis from De Lille. He stressed that the pair would be requested to present the City’s water management measures “with far greater clarity”.

Asked if this means that the DA thinks De Lille has failed to communicate these plans with sufficient clarity, Selfe replied: “Yes – but we are correcting this.”

This represents a distinct change of tack from the national DA regarding the Cape water crisis.

When Daily Maverick interviewed Maimane about the water crisis in October, the DA leader had no criticism to offer of De Lille’s approach.

“I have regular updates with the Mayor of Cape Town,” Maimane told Daily Maverick at the time, explaining that the City was hamstrung by national government’s failure to co-operate and problems behind the scenes with price-rigging from water-related service providers.

Less than three months later, however, the DA appears to be readying itself to throw De Lille under the proverbial bus.

The tipping point may have been De Lille’s proposal, late last year, to introduce a Cape Town “drought levy” based on property prices. While the move was initially approved unanimously by the DA caucus in the Cape Metro, the party’s Metro leadership then did an about-turn following an outcry from residents and the suggestion that the move could be illegal.

Last week, De Lille found herself suddenly politically isolated on the issue, and receiving support from the ANC in the Western Cape.

“You now want people to believe the drought levy is De Lille’s issue?” the ANC’s Xolani Sotashe was quoted as saying. “We cautioned you as the ANC and you didn’t listen. Now that you are getting a backlash from communities you leave De Lille alone to deal with the consequences of your decision.”

With national elections drawing ever closer, the DA may be hoping that politically binning De Lille will convince the Western Cape electorate that it was largely the mayor whose bungling has brought Cape Town to the point of running out of water. In reality, as previous Daily Maverick investigations have shown, the situation is far more complex than that and also pre-dates De Lille’s term of office in some regards.

While the DA hopes that its action on De Lille will restore stability to Cape governance, the fallout continues. Monday brought the news that Cape Town City Manager Achmat Ebrahim, who is implicated in alleged wrongdoing alongside De Lille, has resigned.

On the same day, meanwhile, it was also announced that the Western Cape has “an estimated level of 16% usable surface water” left in its dams. DM