#ANCdecides2017: In his final report as President, ‘humble’ Zuma fires salvos at critics, blames everyone but himself 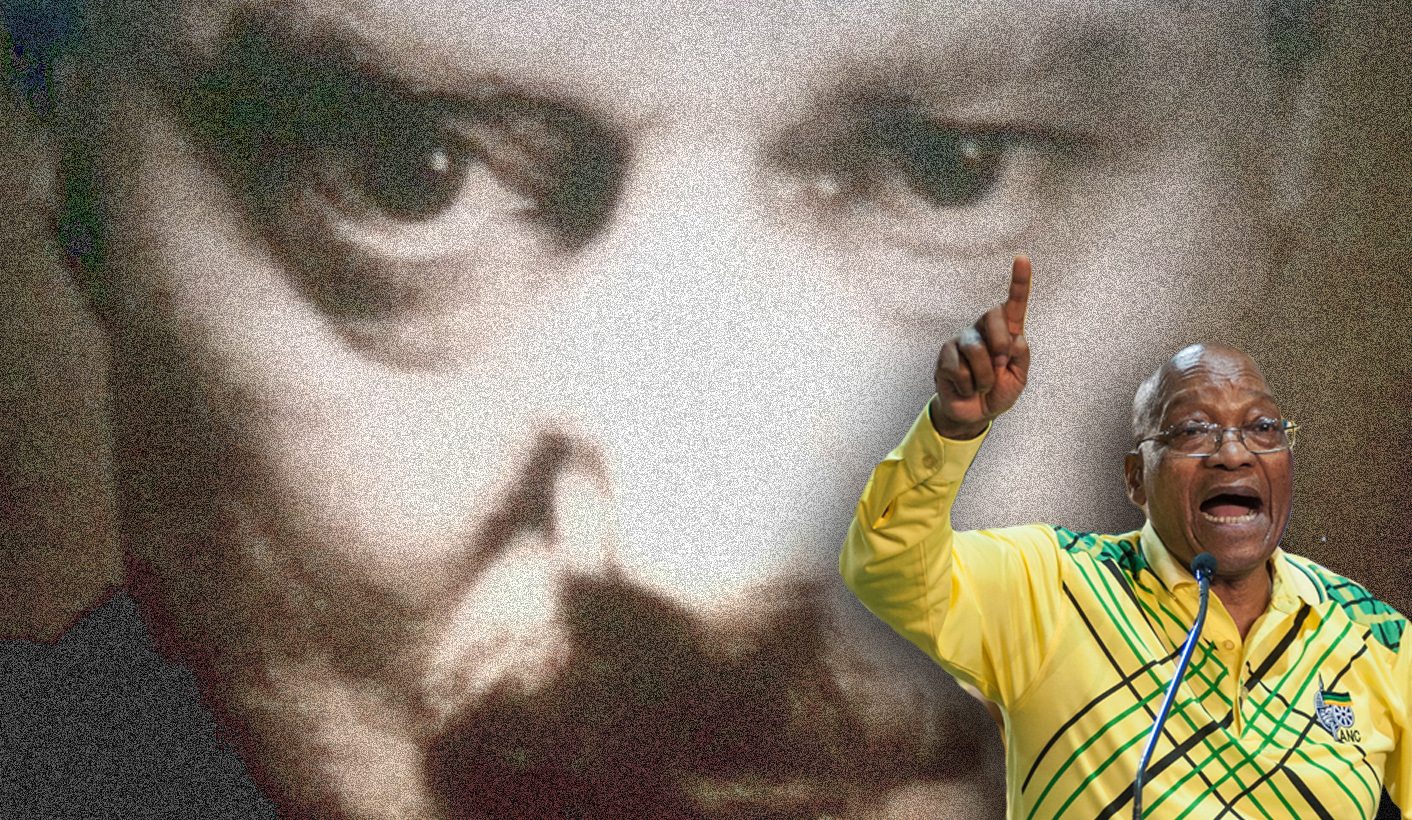 President Jacob Zuma took a turn at the humble trough as he delivered his last official address to the ANC, saying: “I tried my best.” The response was a rare moment of soliciting more than polite tepid applause: the provinces aligned to the party presidency bid of Nkosazana Dlamini Zuma – KwaZulu-Natal, Free State and North West – were on their feet. And then Zuma, who pretty much slammed anyone inside and outside the governing party who ever criticised him, issued the conference its marching orders: there could be only one president elected and once that happened, “all of us will support the one chosen by the majority. Finish and klaar…” By MARIANNE MERTEN.

It was in the off-the-script bits that President Jacob Zuma appeared to revel, and no more so than at the end of his last political report to an ANC conference as the outgoing party president.

Humble was the approach as he thanked delegates for allowing him to lead the governing party – “Standing here, I am waiting for one leader to emerge whom I’m going to call my president…” – alongside a grand gesture to those who had called for him to step down: “I want to say… I bear no grudge. You are my comrades, you are expressing (your views). It is politics. You have your right to have your views…”.

But of course that wasn’t quite the line earlier in the around two-and-a-half-hour delivery of the political report to conference. Going off-script, there were harsh words for veterans. Zuma emphasised that it was never the intention for veterans to “cause problems” in the organisation, nor to be part of the hurly-burly of politics, but to help the ANC. “I will be retiring. I will be playing a key role. I will remind my comrades… Veterans can’t be part of the problem,” said Zuma.

For well over a year there have been various calls from veterans and stalwarts for Zuma to step down in the wake of a series of scandals. This intensified after the memorial of Ahmed Kathrada in March 2017 when his personal letter to Zuma to step down was read out by former president Kgalema Motlanthe. A similar appeal by the late struggle stalwart Laloo Isu Chiba was recently released by his family.

And then, in Zuma’s speech, it was the turn of ANC alliance partners, the labour federation Cosatu and the South African Communist Party (SACP). “In an unprecedented move, we saw in the past few months our alliance partners marching side by side with right-wing forces, who are historical opponents of our democratic revolution, calling on the president of the ANC to step down.”

There were barbs about Cosatu’s ban on Zuma addressing its rallies after the May Day booing that saw the president whisked off the stage without having uttered a word. And, of course, there was criticism for the SACP contesting against the ANC in the Metsimaholo by-election in the Free State.

The list of presidential targets was long. With only one vague reference to “the said capture of the state to advance business interests”, Zuma turned the spotlight on corporate greed and private sector corruption that, according to him, was being treated softly-softly as collusion, accounting irregularities or lapses in corporate governance. “Theft and corruption in the private sector is as bad as that in government and must be dealt with decisively by law enforcement agencies.”

As Zuma drew the line in the sand on ANC alliance contestation – “The only thing we must not do is to discuss our problems in public” – he also urged the ANC to find ways to protect itself from corporate greed and to “ensure that the decisions we take are informed by the policies of the ANC and are not dictated to by business interests”.

Or, roughly translated: the ANC is a victim of scurrilous attempts to corrupt its gloriousness. Perhaps the irony is lost on Zuma, whose administration and family find themselves at the sharp end of the #GuptaLeaks State Capture revelations.

“Already we have received threats that the ANC will implode and the economy will collapse if certain outcomes arise from this conference, be it conference resolutions on the economy or the leadership elected, if these are not those favoured by business,” Zuma cautioned delegates.

It was also important for the ANC to eradicate what Zuma described as “things that are foreign to ANC culture and policies”, so the party would emerge as the ANC everyone knew – and united. That would mean taking full control: “We need to reaffirm the authority of the organisation over individuals,” Zuma said, off-script again.

A major annoyance was the ANC being taken to court by the ANC and allowing judges to dictate ANC organisational processes. Zuma’s comments came less than 12 hours after a special NEC meeting decided that the provincial executive from the Free State and KwaZulu-Natal, alongside those branches in the Free State and North West whose general meetings were declared invalid, would only be observers – and not voting delegates.

“I think, comrades, we should really discuss this seriously. It is not in keeping with the customs and policies of the ANC… It is gradually eroding the authority of the ANC… We can’t believe the courts are a solution to ANC problems,” said Zuma, who days earlier lost key court battles around the appointment of the prosecuting boss and on the review of the public protector State of Capture commission of inquiry.

Turning to the courts instead of settling disputes internally was the result of not enforcing an earlier ANC decision that whoever took the party to court would find him/herself out of the party. “If we had implemented the decision it would have curbed this,” Zuma said before going back to the official report – and sharp criticism of the media, “an active participant with vested interests” that was being mobilised against the ANC from Joburg to New York and London, and NGOs.

Civil society organisations, which were not named, were mobilising on the basis of hostile opinions against the ANC and some well-resourced NGOs existed to fight the ANC as party and government.

“Other formations appear to exist to protect white privilege and in particular to ensure the maintenance of the unequal economic relations in society, while pretending to be protecting the interests of our people as a whole including the poor and the working class.”

And of course, that looped back to Zuma’s opening salvo: radical economic transformation is being resisted because it threatened entrenched interests.

“We must be mindful of the fact that the primary beneficiaries of the current socio-economic status quo will by nature be opposed to any talk of radical economic transformation, because it challenges and threatens the status quo and seeks to transform it fundamentally.”

And while radical socio-economic transformation has been ANC policy for the past five years, according to Zuma, it was in this part of the political speech that the clash of rhetoric and reality led to verbal somersaults.

While decisive action was required, particularly to address poverty, inequality and unemployment, and ensure progress, there also had to be caution. “… (R)eckless action will plunge the country into deep economic and social distress. We must tread carefully, but act, because of the serious economic challenges facing our country currently.”

South Africa has been downgraded to junk by two international ratings agencies and is on a 90-day review by Moody’s. That decision meant South Africa staved off foreign outflows that would have followed. Tax collection has fallen R50.8-billion short of target, and there is still no concrete announcement of exactly how SAA and other State-owned Entities (SoEs) bailouts and financial support for poor higher education students would be financed.

Zuma’s political report in many places read like a presidential State of the Nation Address; there were reels of numbers on how the ANC government improved poor people’s lives from access to basic services, housing and electricity. But it was a political masterstroke against a background of ongoing manoeuvring over the recognition of conference voting delegates, or the credentials.

Criticism of the ANC’s track record as a party that closed ranks around Zuma regardless of a series of scandals, and the ANC government, has been expressed as an attack on the governing party that is being victimised by private business, NGOs, the media, and the courts. And when under attack, the ANC closes ranks.

Or, as Zuma put it: “… (U)nity is the rock upon which the ANC was founded, and unity is what will make the ANC and South Africa succeed… I am convinced that the ANC will sail through the current rough and stormy seas and ultimately emerge even stronger”. DM