#ANCdecides2017: Hamas is in the house

#ANCdecides2017: Hamas is in the house 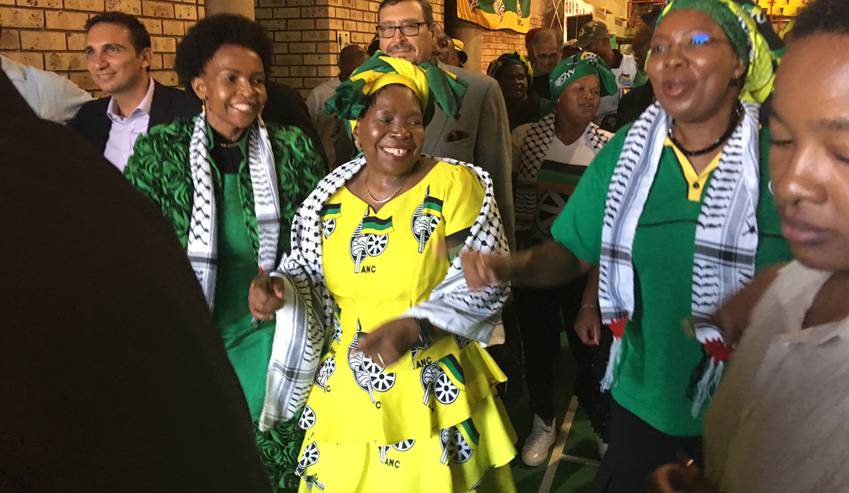 Two senior leaders from the radical Palestinian movement Hamas will be seated next to delegates from other ANC fraternal organisations from across the world in the Nasrec Expo Centre plenary hall, when the party’s 54th national conference opens there on Saturday. It’s the first time the governing party will be hosting a delegation from what major Western powers brand a terrorist movement. By CARIEN DU PLESSIS.

New leadership isn’t the only thing set to make waves at the ANC’s national conference in the next five days. Some within the party want South Africa to close its embassy in Israel, downgrade diplomatic relations, and apply sanctions.

Trade union Nehawu has even called for the expulsion of the Israeli ambassador to South Africa. Ambassador Lior Keinan started his posting to South Africa in August and has previously said he wants to advance relations with South Africa, rather than move towards boycotts.

There’s a particularly strong lobby in the ANC from party members in the Western Cape who are also active in the anti-Israeli Boycott, Divestment and Sanctions (BDS) lobby group. BDS is also expected to attend the ANC’s conference to push for a resolution on the embassy, but some activists fear that the ANC would load the international relations commission discussing this matter with ambassadors, who will then argue against such a radical step.

At the same time, however, the party is hosting a two-person delegation from Hamas, a radical Palestinian organisation that has been governing the Gaza Strip, de facto, for the past decade.

Hamas wants to see an end to the Israeli occupation of Palestine, and its military wing has launched attacks against Israeli civilians and soldiers in the past. It’s also pushing for international pressure on Israel.

Hamas politburo member Muhammad Nazzal said Hamas was a fraternal organisation to the ANC and was invited to the conference after a delegation visited the ANC two years ago.

At the time Hamas was considering opening an office in South Africa, but the delegation declined to respond to a question on the progress made in this regard.

Nazzal said the conference was important to Palestinians as much as it was to South Africans.

He said Hamas believed the proposed resolution on South Africa’s embassy in Israel was “the logical extension of the ANC’s support for the boycott, divestment and sanctions campaign against Israel”.

“Our leadership has already expressed our unequivocal support for the BDS campaign as a critical form of resistance against the apartheid state. And it is in this context that we welcome the discussion about downgrading South Africa’s presence in Israel. The adoption of the resolution will take the struggle of the Palestinians to a new level, and will establish South Africa at the forefront of the solidarity effort to liberate the Palestinian people,” he added.

He said Hamas also hoped “solidarity initiatives” would be discussed, such as a “global coalition” between Palestinians and South Africans to “deepen the isolation of the apartheid Israeli state”.

He said: “Conference should discuss this issue, especially in the context of the Africa-Israel summit that was to take place in Togo, and for which the Israelis are looking for an alternative venue. South Africa must ensure it does not take place, and South Africa must lead the charge to make sure that Israel can never gain observer status at the African Union.”

He said Hamas was close to the ANC because it drew inspiration from former president Nelson Mandela and South Africa’s resistance movements under apartheid.

“The ANC has been, and remains, a comradely and steadfast partner to the Palestinian people and to Palestinian resistance, and Hamas’s interaction with ANC leadership and members assures us that they will remain friends and allies of the Palestinian struggle,” he said.

The delegation is set to meet with the ANC’s allies, the SA Communist Party and labour federation Cosatu, as well as religious leaders, political and civil society organisations and Palestine solidarity groups.

Hamas’s visit in 2015 caused an outcry with the South African Jewish Board of Deputies, a pro-Zionist lobby group that has had representatives observing ANC conferences in the past. It wrote a letter to the ANC at the time, calling the visit a “shame”.

A strong push-back against a resolution to close South Africa’s embassy in Israel is expected. There is concern about this, and the ANC’s cosiness with Hamas, among diplomats in Pretoria.

In November the head of the ANC’s subcommittee on international relations, environmental affairs minister Edna Molewa, caused a furore within the ANC when she agreed to meet with an Israeli government delegation, which included its minister of regional cooperation, Tzachi Hanegbi.

Minister in the presidency Jeff Radebe and former housing minister Tokyo Sexwale were also present in what appeared to have been their ANC rather than government capacity.

Party spokesperson Zizi Kodwa at the time said the party had “a very clear resolution about our relationship with [the Israelis] in both government and the party”, and would await answers from Molewa’s committee. DM