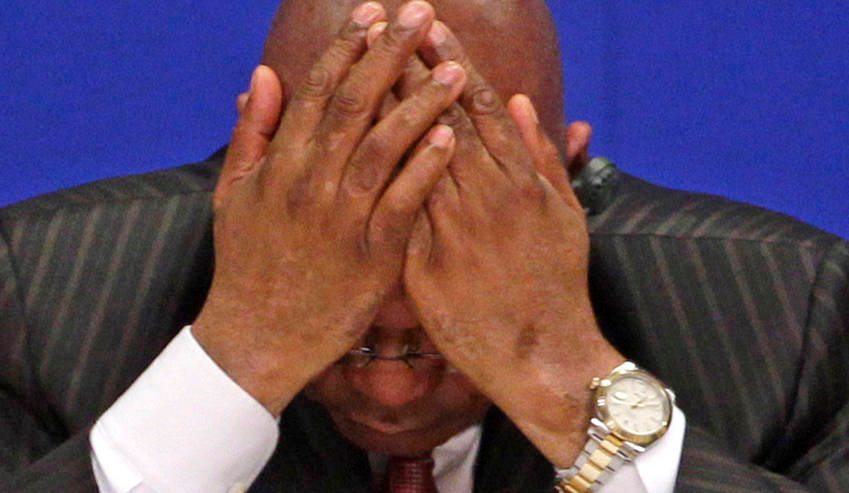 The only way President Jacob Zuma’s week could be worse is if his Gupta-gotten gains were invested in Steinhoff shares. By PAULI VAN WYK.

President Jacob Zuma became the first President of South Africa to be issued with a personal legal cost order.

A full bench in the High Court on Wednesday unanimously and harshly reprimanded Zuma’s attempts to stop the release of the Public Protector’s State of Capture report in October last year.

Judge President Dunstan Mlambo said Zuma had acted in “flagrant disregard” for the constitutional duties of the Public Protector, and that the taxpayer should not “carry that burden” of footing Zuma’s legal bill.

About three hours later, the same court also found for a second time in less than a week that the President was too conflicted to fulfil his constitutional duties.

Zuma argued that he has the sole right to institute a commission of inquiry and that the Public Protector cannot instruct him what to do, and how to do it.

In her report titled State of Capture, former Public Protector Advocate Thuli Madonsela made several adverse findings against Zuma. She recommended that a commission of inquiry be instituted to investigate State Capture, but that the President cannot appoint its head as he is conflicted.

On Wednesday Mlambo rejected all Zuma’s arguments, saying that Madonsela was correct to foresee that the process may be compromised if Zuma selected the judge who would be investigating him, his son Duduzane and his friends, the Guptas.

The court found that, instead, the Chief Justice should appoint the judge for the commission of inquiry to remove all perception of bias.

The court found that the “remedial action in the Public Protector’s Report titled State of Capture is binding”. The President must appoint a commission of inquiry within the next 30 days, “headed by a judge solely selected by the Chief Justice”.

This means by Friday 12 January 2018, Zuma must establish a commission of inquiry.

On Friday a full bench of judges, again lead by Mlambo in the High Court in Pretoria, kicked prosecutions boss Advocate Shaun Abrahams out of his job, saying his appointment was irregular. His predecessor, Mxolisi Nxasana, irregularly accepted Zuma’s proposition of a R17,8-million golden handshake (the court stopped short of labelling it a bribe) to leave his position as National Director of Public Prosecutions (NDPP). The court further held that Zuma was too conflicted to pick a new NDPP and ceded the job to the Deputy President (Cyril Ramaphosa, at the moment).

Within three hours, Zuma released a hastily drafted statement saying he would appeal the judgment. Before day’s end on Friday, Abrahams also filed a formal appeal in a move widely regarded as an attempt to stop Ramaphosa from making an immediate appointment. DM