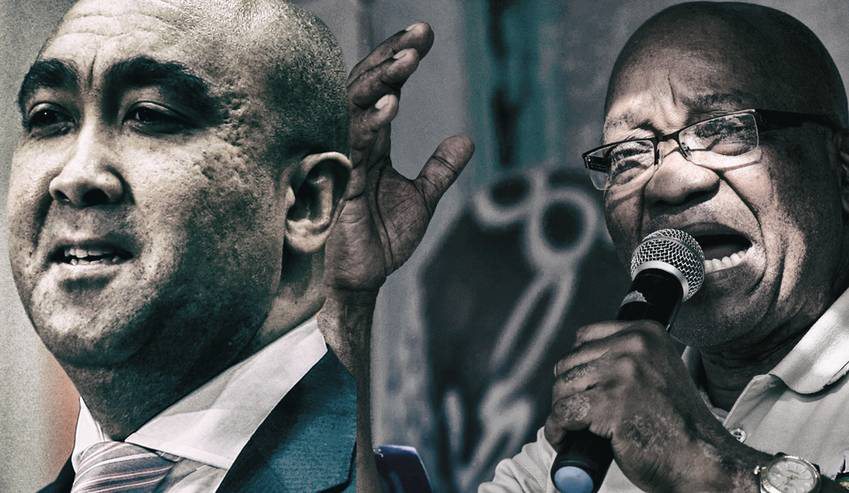 Three hours after Shaun Abrahams was kicked out of his job by a full bench of judges in the High Court in Pretoria, President Jacob Zuma played his card: An appeal to buy time. By PAULI VAN WYK.

“Whilst the President awaits a full briefing on the judgment, he has been advised that an early assessment displays, with respect, various grounds upon which a successful appeal may be prosecuted,” the presidency declared in a hasty statement.

Zuma has never announced an appeal in any of the numerous cases he has been involved in so quickly. It is widely seen as a move to block any swift action from deputy president Cyril Ramaphosa, who now sits with a queen of hearts in the hand dealt to him a week before the ANC’s elective conference is due to take place.

On Friday, Judge President of the Gauteng Division of the High Court, Dunstan Mlambo ordered that Shaun Abrahams’ appointment was invalid and set aside, and that the deputy president appoint the next prosecutions boss.

Mlambo found that Zuma was “conflicted” and could therefore not appoint a National Director of Public Prosecutions (NDPP) that would be beholden to him.

“In our view President Zuma would be clearly conflicted in having to appoint a NDPP…particularly the ever-present spectre of the many criminal charges against him that have not gone away,” Mlambo said.

The conflict arises from the myriad of criminal charges against Zuma and the possibility of a prosecution.

“There is no longer any obstacle in the way of the criminal charges proceeding (after the Supreme Court of Appeal (SCA) held that Shaun Abrahams must consider anew the 783 counts of corruption and money laundering against Zuma). The President told the SCA that he ‘…had every intention in the future to continue to use such processes as are available to him to resist prosecution,’ in other words not to stand trial at all, and this would place the incumbent NDPP firmly on the spot. It seems incongruous that under those circumstances President Zuma should then be seen to be appointing the NDPP, since his conflict both actual and perceived is self-evident.”

The court held that the next NDPP cannot be appointed by Zuma, and then be expected to have sound judgment over the possible prosecution of his employer. For that reason, the deputy president will take over all relevant duties and oversight for the remainder of Zuma’s term as President, Mlambo ordered.

Mlambo clarified that Abrahams should stay in the job for the next 60 days or until such time as the deputy president appoints a new NDPP.

Mlambo delivered his judgment  on Friday  in the case brought against Zuma and Abrahams by Corruption Watch, Freedom Under Law and Council for the Advancement of the South African Constitution.

A material part of the applicants’ argument focused on whether Abrahams’ predecessor, Mxolisi Nxasana, requested Zuma to leave the National Prosecuting Authority (NPA), or whether Zuma approached Nxasana with a lucrative R17,3m settlement offer.

Zuma continuously argued Nxasana’s removal was at his own behest and that the appointment of Abrahams was therefore lawful and regular.

Mlambo however found that Zuma and his counsel was not entirely frank with the court on this point. Considering all the correspondence between Nxasana and Zuma, it was however clear to Mlambo that Nxasana actually did want to stay in his job and that the settlement offer must have come from Zuma.

“It follows that in our view the settlement agreement is invalid because Mr Nxasana did not request to be allowed to vacate the office of the NDPP…but rather because he was persuaded to vacate the office by the unlawful payment of an amount of money substantially greater than that permitted by law,” Mlambo said.

In reaching this conclusion, Mlambo then asked whether Nxasana and Zuma knew they acted unlawfully.

He did not mince his words.

“Beginning with the President, there are the following considerations. First, there is a broader pattern of the President’s conduct in litigation, of defending what ultimately turns out – on the President’s own concession – to have been the indefensible all along, banking on any advantage that the passage of time may bring. This pattern has played out in well-publicised cases in the Courts, and would be naïve to ignore.”

Mlambo refrained from finding that Zuma and his counsel outright lied to the court, but commented that one might be tempted to come to such a conclusion. He settled for describing Zuma’s conduct as “reckless”.

Mlambo found that Nxasana too was “reckless” and must have known that it was unlawful to accept the R17,3m golden handshake.

For this reason, Mlambo decided it would not be “just and equitable” to reinstate Nxasana.

That left Mlambo with the consideration over whether Abrahams should be left in his position. But this didn’t sit well with Mlambo, saying that “the President [then] will have achieved, through unlawful means, precisely what he had wished to attain all along”.

Mlambo also didn’t appreciate the way Abrahams had associated himself with Zuma in previous litigation, and said it was “inconsistent with his prosecutorial independence”.

Therefore the appointment of Abrahams to the position was also invalid, Mlambo said in a judgment that bore a resemblance to the Menzi Simelane case.

The Zuma years marked a turbulent time for the National Prosecuting Authority (NPA). In 2009 Simelane was the first NDPP to be appointed by Zuma. His appointment was however successfully challenged by the DA based on his failure to be a “fit and proper” person for the job. Zuma allowed Advocate Nomgcobo Jiba to act for an inordinate time in the position, until another threat of a court challenge forced him to appoint a permanent head. Zuma then appointed Mxolisi Nxasana, who showed his independence when he moved to suspend Jiba for her handling of several high profile cases. Jiba has subsequently been removed from the roll of advocates.

In the current case, the applicants asked the court to consider reinstating Nxasana, or in the alternative allow for the position to be vacant for 60 days and order the deputy president to choose the next candidate.

Mlambo decided therefore that the deputy president will appoint the next NDPP  within 60 days, and that Abrahams will stay in his position until his successor has been appointed.

The court further held that sections 12(4) and 12(6) of the NPA Act are unconstitutional. These sections give the President of South Africa the sole discretion over the possibility of an extension of the NDPP’s 10-year contract, as well as the ability to suspend and remove the NDPP from their position. The court referred the legislation to parliament.

Reacting to the news, the ANC said in a statement released just after  noon  on Friday that all parties involved should “reflect” on the judgment and its implications “as well as decide whether to appeal or not”.

“As the ANC, we trust that whatever decision taken will be in the interest of the administration of justice, the NPA and the country as a whole.”

Freedom Under Law, one of the applicants, said the judgment “signals the critical importance of the independence of the NPA to the health of our constitutional democracy. Persons at its head must be of unimpeachable integrity and there can be no suggestion that political interference enters into their removal or appointment.”  DM