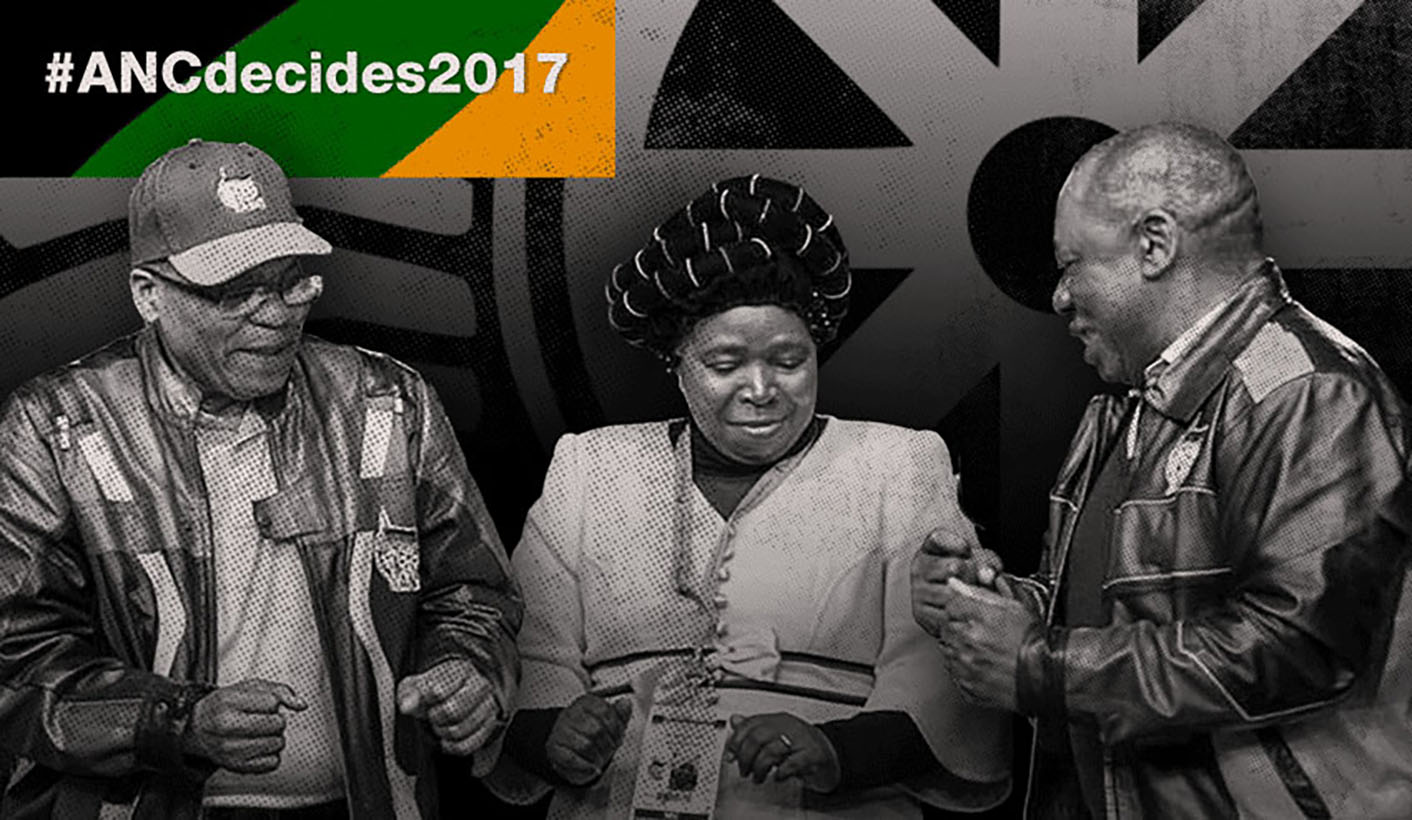 It’s upon us at last, so, what to expect during the ANC’s 54th national conference at the Nasrec Expo Centre in Johannesburg starting on Saturday? It’s hard to say, but there will be a programme which will include, somewhere along the line, opening speeches, closing speeches, and some voting and policy work in between. This could, however, all change and, in the case of an extreme and very unlikely emergency, not happen at all. By CARIEN DU PLESSIS.

Some journalists have already received rejection letters from the ANC, telling them they’d have to settle for watching the party’s elective conference remotely by live stream.

Word is that more than 3,000 journalists applied for accreditation and that not everyone could be accommodated. It would have meant close to one journalist for every one-and-a-half delegate. Local media seemed to enjoy some preference, bless!

There’s been huge interest in the ANC’s 54th national conference, not just from within the ANC but also from the outside, because the person chosen as the new president is also likely to become the president of the country in 2019 (unless the ANC doesn’t win the election, which is also a possibility).

So what will be happening at the actual conference?

Delegates are likely to arrive a day or two in advance to get accredited and have caucus meetings to discuss conference strategy. This is also a good time for the wining and dining and bribing to take place – if it’s true what they say about how lobbying takes place in the party.

Delegates from provinces are likely to have been block-booked in hotels around the province – the ANC has tweeted that 5,940 beds have been booked for the conference – to make organisation, lobbying and discipline easier (provinces are responsible for keeping delegates in line).

That’s more beds than the expected 5,240 delegates, but presumably the extra beds are for staff members and non-voting delegates, such as the ambassadors and experts controversially expected to participate in commissions.

Unlike in 2007, when registration turned out to be one centralised and slow mess, delegates will get their accreditation tags in their provinces before coming to Gauteng, or in their hotels upon arrival.

The chosen few – usually national executive committee members and ministers – get to attend a gala dinner organised by the Progressive Business Forum the night before the conference starts. At this swanky occasion will also be various businesspeople (Patrice Motsepe always gets to sit at the top table with Number One) and foreign diplomats from non-fraternal countries such as the United States and Europe in general. This dinner and the fairly on-message sanitised business breakfasts will be the only glimpses these guests will get into conference activities as invites to the opening and closing plenary sessions have been restricted.

At Nasrec it will be Reconciliation Day only in name. This is the day that could make or break a camp’s conference.

Delegates will be seated with their provinces, and those from the women’s, youth and veterans’ leagues will sit with their leagues. This will be to facilitate debate and contributions from the plenary floor.

It’s not entirely clear in which sequence events will happen, but it’s likely that the opening session will happen first. It will include the singing of Nkosi Sikilel’iAfrica, interdenominational prayers (which may or may not take a factional turn), and President Jacob Zuma delivering his last political overview with the current national executive committee sitting on the stage behind him.

Whether it will happen at the always ambitious time noted on the programme – which is yet to be distributed – is not entirely clear (this will depend on logistics like transport, the energy of the delegates, and any number of other factors), but such are the demands of live television broadcasts that it might happen vaguely on time. Or not. This is one of the few sessions where journalists will be allowed into the fenced-off enclosure that will mark conference boundaries.

After that, journalists and other non-voting delegates will be kicked out as conference adopts credentials. This involves a reading out of how many delegates there are from each province.

This isn’t as simple as it sounds. Because of how support is divided between provinces, it’s wise for each camp to question the validity of delegates from the other camp as much as possible. Already there are allegations that some delegates from the North West were not chosen by branches, but by factional organisers. The legitimacy of delegates could be challenged at this stage.

Delegates could also bring up challenges to conference rules before these are adopted. The difference between becoming a president or not could be down to less than a 100-vote difference, so this process could be fiercely-contested and drawn out.

If the credentials contest, by some miracle, is short and sweet, delegates will have to decide whether to adopt amendments to the party’s constitution that will allow for two deputy secretaries-general, as suggested by a number of provinces. There will also be a fairly robust debate about the issue of two deputy presidents. KwaZulu-Natal was the first to raise the issue at the party’s June/July policy conference, and Gauteng has now eagerly lapped it up while KwaZulu-Natal is more lukewarm about it.

The party is divided almost along the middle when it comes to support for the two main presidential candidates, and having the losing candidate become deputy president could be a good way to prevent a split, some in the party reckon.

Whether this issue will be “negotiated” during voting, as some have suggested, or adopted as a constitutional requirement, is not quite clear yet and could be another area of contestation.

After this, nominations will start. ANC MP Nkosazana Dlamini Zuma and Deputy President Cyril Ramaphosa have both been nominated by provinces already during the recently-conducted provincial general councils, so their names will be on the ballot. There will be an opportunity for nominating from the floor – 25% of hands will get ANC treasurer-general Zweli Mkhize, businessman Mathews Phosa, minister Lindiwe Sisulu or any of the other presidential still-hopefuls on the ballot.

After the nominations are done, ballot papers will be printed and voting will start for president. Votes will be counted and announced, with journalists in attendance.

This process will be repeated for each of the next five, or six, or seven positions, after which nominations and voting for the 40 or 50 or 60 or 80 additional members (depending on the constitutional amendments before the voting), will start.

This process could go on overnight or into day three.

It could be a blue Monday for the losers of the previous days’ voting, but hopefully the ANC will find a way to make everyone feel like winners. At this point of the conference some might just prefer to stay in their hotel rooms to sleep, or go shopping in Sandton with the bribe money earned (if there’s truth to these rumours), or do things more enjoyable than hanging around Nasrec’s concrete charm a week before Christmas. Commissions on policy issues might have started by this time and those who attend conference to have their voices heard, will slog it out on issues like white monopoly capital, radical economic transformation, and whether or not Israel and Morocco should be South Africa’s friends.

Somewhere during the day the new NEC might also be announced, or, if the voting for the top officials spilled over into this day, this is expected to be concluded.

A little bit more the same of day three, except the voting should be finished by now. Some kind of leadership walkabout might be conducted for journalists in the business lounge to keep the hacks from losing their wits and reporting on inane things like the food dished up in the media centre. Who knows, maybe there will even be a guided tour of clothing stalls this time around, but because these are in the enclosure where journalists aren’t allowed to set foot, literally, the hope for this is small.

There will also be closed plenary sessions for commissions to report back on their discussions, and resolutions will be adopted on policy issues (there might be more debate in plenary on issues too). Commission heads will then cross the divide to the media centre for live streamed press conferences on policy.

If the ANC was successful in keeping both winners and losers of the leadership contest happy, delegates will be more united than ever before and sing feel-good struggle songs non-stop. If, however, there is unhappiness, numbers would have severely dwindled by now. It’s school holidays, after all, and almost Christmas.

Report backs from commissions – and press conferences – might continue on this day, and it will all eventually be concluded with a closing session, open to journalists, where the new president will speak. There’s unlikely to be too much singing and dancing, because the new president won’t be Zuma (then again, who knows?).

At the party’s last conference in 2012 in Mangaung, the end of this session was disrupted by a fierce thunderstorm, which almost blew the marquee over. Nasrec, fortunately, is a lot more sturdy, but maybe this time around miracles could happen and it might even snow. DM