Universities in limbo as all goes quiet on student fees 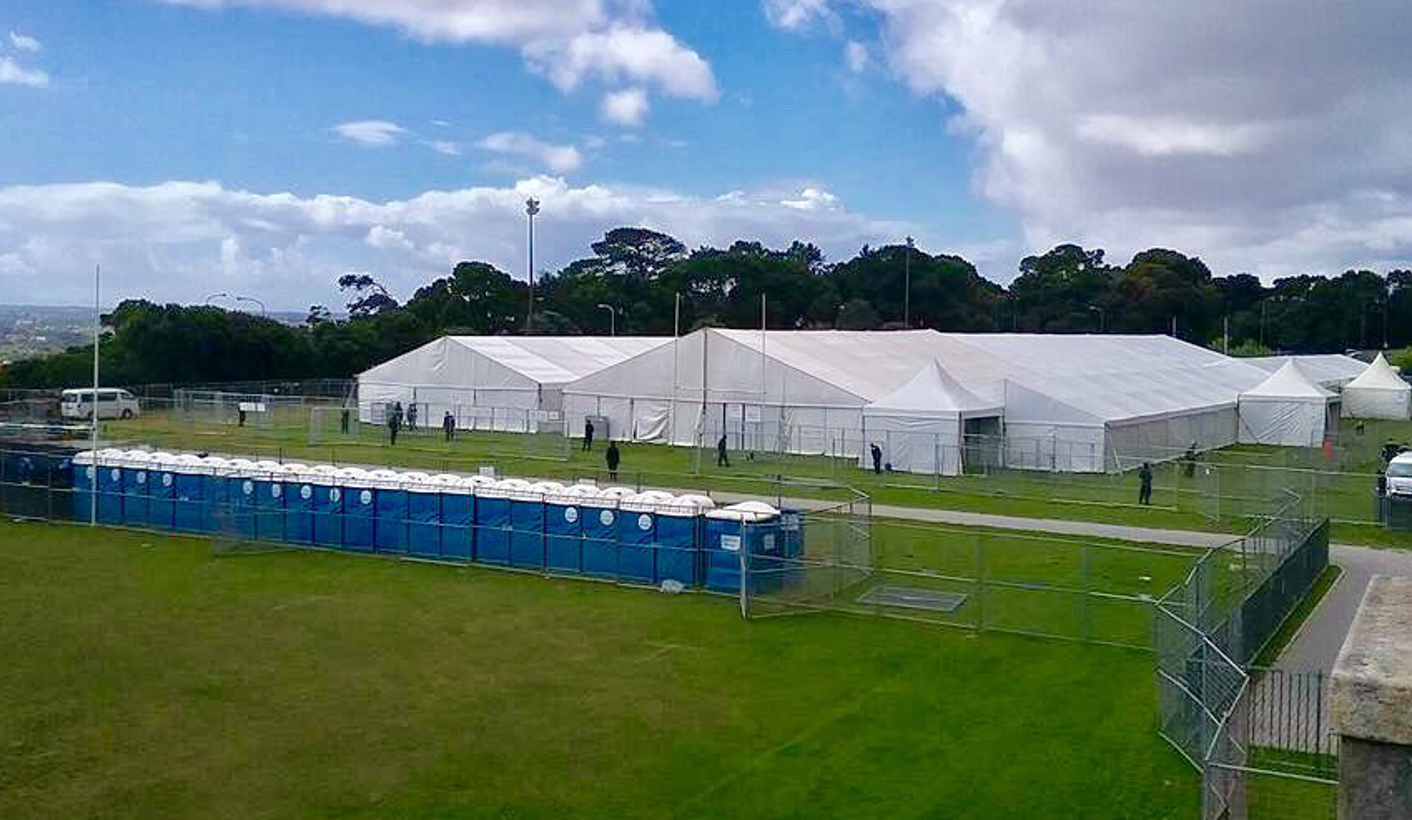 Exams written in tents; cash rewards for information about people destroying campus property; ongoing student arrests. Beyond these aspects, end-of-year exams at South Africa’s universities are proceeding relatively peacefully. Behind the scenes, though, there is considerable uncertainty as to what the future holds. Decisions have to be made by December about student fees for 2018, but there’s still no word from the Department of Higher Education as to what its recommendations will be. Following rumours of a fee-free plan to be pushed through by President Zuma, meanwhile, the Presidency has also fallen silent on the matter. By REBECCA DAVIS.

Motorists driving past the University of Cape Town’s campus over the last few weeks may have seen a circus-like structure erected on the university’s rugby fields. The fenced-off tents, guarded by security, are hosting the bulk of UCT’s exams.

Announcing the “unusual step”, UCT vice chancellor Max Price explained in a statement that it was motivated by the university’s “firm commitment to the students who want to write their exams and see the academic year through to its end”. He further stated that security officers would be stationed within the exam tents to intercept “any protesters who are students, and therefore may be entitled to be in the exam venue, from attempting to disrupt any exams”. Price added that medical and other emergency teams would be on standby.

Welcome to 2017 on South African campuses. The Cape Peninsula University of Technology (CPUT) made use of a similar solution to ensure exams went ahead, with spokesperson Lauren Kansley telling Daily Maverick that a 550-seater tent was pitched at CPUT’s Bellville campus.

These measures have not met with universal favour – students canvassed by Daily Maverick complained about the heat in the tents – but they appear to have broadly served their purpose.

“UCT exams commenced on 15 November and have been proceeding without any disruptive incidents,” spokesperson Elijah Moholola said on Tuesday, confirming that the academic year would end on schedule. AT CPUT, five out of six faculties have already completed exams without disruptions.

Spokespeople for the University of Johannesburg (UJ) and Wits similarly informed Daily Maverick that their exams have gone ahead without hitches, while other South African universities failed to respond to requests for comment.

The relatively peaceful administration of exams was in some cases a contrast to the unrest on some campuses until recently, however. At CPUT and UCT, a combined total of 36 protester arrests were estimated by spokespeople to have taken place this year. UCT has offered a reward of R30,000 for “information leading to the arrest and successful prosecution of anyone who has committed criminal acts, such as arson, or been involved in malicious damage of property”.

It is the Western Cape universities, together with the University of the Free State, which have seen the main action in terms of student protests this year. At UJ and Wits, university representatives said that no protest-related arrests have taken place in 2017.

But while things may seem calm on the surface, there is growing uncertainty as to what 2018 may bring in terms of the precarious state of university funding. Most universities have not yet been willing to make firm decisions on budgets or the crucial issue of student fees increases in the absence of leadership from government on this matter.

“The university is waiting for recommendations from the Department of Higher Education and Training on the way forward, which we hope will be announced soon, as this will impact on income for 2018,” Wits spokesperson Shirona Patel told Daily Maverick. “The university has to make a decision on budgets, including tuition income, by December.”

UCT’s Moholola confirmed that the university is in a similar position, with the UCT council set to meet in December to make fees decisions for 2018. CPUT has also suspended a decision on fees increases.

UJ spokesperson Herman Esterhuizen, meanwhile, told Daily Maverick: “While the university continues to await government’s response to the Commission of Inquiry into Higher Education and Training – also known as the Fees Commission Report – the university’s view is that the status quo be maintained.” This would mean an 8% fee increase for students who can afford it, and the state subsidising the increase for those with family incomes below R600,000 per annum.

When the Fees Commission Report was released last week, no indication was given as to whether government endorsed its proposal to fund higher education through a system of income-contingent student loans. At the time, President Zuma said merely that an inter-ministerial committee was “processing” the report, and that a “pronouncement” would be made by the president once the committee’s work was concluded.

Higher Education Minister Hlengiwe Mkhize cautioned journalists last week that the report amounted to “recommendations only”, and that “decisions still have to be made by government”.

On Tuesday, a Daily Maverick inquiry to the Presidency as to whether another announcement on student fees was planned before December went unanswered.

In the interim, however, it has been made clear that the Fees Report has extremely few powerful supporters – if any. The ANC issued a statement authored by Secretary-General Gwede Mantashe expressing concern about the report, and calling on government to “reject the proposal for a cost-sharing model which will further indebt students”.

Even the Democratic Alliance, which initially tentatively welcomed the report, has since described the income-contingent loan proposal as “not helpful” and an “expensive and potentially cumbersome system”. A DA request for an urgent parliamentary debate on the funding of higher education is due for a decision from the Speaker on Wednesday, DA Shadow Higher Education Minister Belinda Bozzoli told Daily Maverick on Tuesday.

Reports of a controversial plan for free education allegedly championed by Zuma family friend Morris Masutha have seemingly died down for now amid widespread condemnation of the proposal.

Where does the current silence from government leave universities looking for guidance on how to plan their finances for 2018?

Department of Higher Education spokesperson Madikwe Mabotha told Daily Maverick on Tuesday that the department is conscious of the urgency of the situation in terms of universities’ need to plan budgets for 2018.

While Mabotha could not give an exact time frame for an announcement on university funding, he stressed that universities have the autonomy in terms of law to decide their own fee increases in the interim – as Stellenbosch University has already done.

The decision to announce fee increases independent of an official fee policy for 2018 has previously brought harsh criticism, however. In October, the Higher Education Transformation Network warned that universities which followed the example of Stellenbosch would face further protests and possible legal action.

The South African executive certainly has plenty on its plate at the moment, between events in Zimbabwe, Friday’s scheduled ratings review, and the December ANC electoral congress. If the current leadership is intending to defer the issue of student fees until after the congress, however, it is doing so at the expense of universities and students for whom difficult decisions cannot be postponed indefinitely. DM