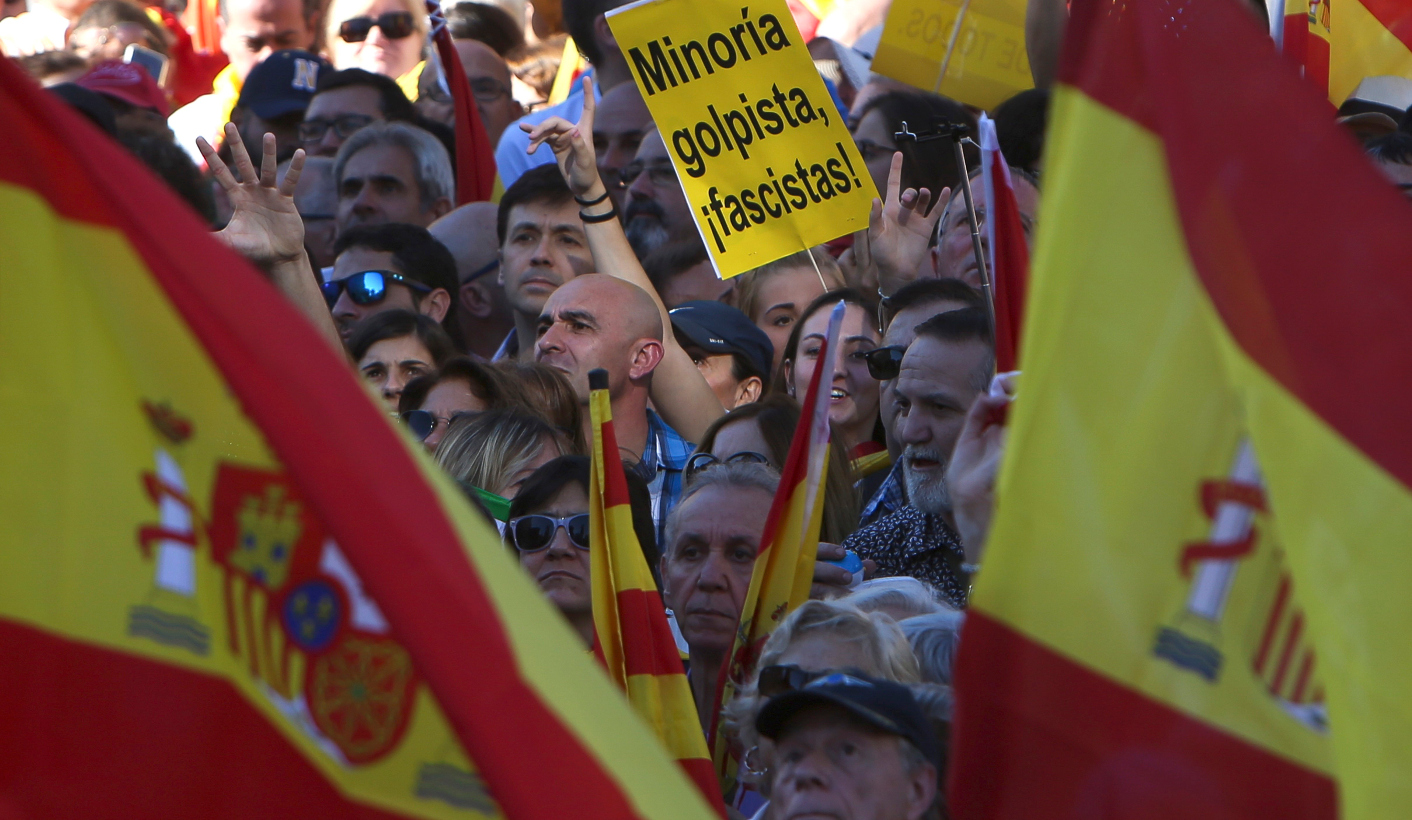 Catalonia said: “I buy my own diamonds and I buy my own rings,” to which the Spanish government said: “This is more than a 50/50 relationship.” Spain is in political turmoil with no end in sight. ANTOINETTE MULLER attempts to sum up the situation.

Less than a month after we tried to first explain what the hell was going on with this whole Catalonia thing, we have to do so again. Back then, there was a lot of huff and puff over triggering Article 155. Well, guess what? Call the article a snowflake because it’s been triggered.

Never been triggered since the Spanish Constitution was adopted in the late 1970s. It allows the central government to “take control of political and administrative institutions of the rebel region”. Some actions could include “suspending the regional government, placing the (Catalan police force) Mossos d’Esquadra under the orders of the interior ministry” and even “closing the regional parliament”, according to experts. The whole thing is just two paragraphs long, but holds tremendous importance.

Catalonia said that it would continue to resist “peacefully” after Spain’s deputy Prime Minister, Soraya Sáenz de Santamaría, was appointed to run the region on a “day-to-day” basis.

“We must do so resisting repression and threats, without ever abandoning, at any time, civic and peaceful conduct,” Catalan president, Carles Puigdemont, said this weekend.

So far, only outlines of government orders have been published and nobody actually knows how these will be implemented yet. This is uncharted territory.

Since the declarations, there have been protests from both sides of the fence. Pro-unity demonstrators took to the streets on Friday and thousands more gathered in Barcelona on Sunday. Further strikes and demonstrations are planned for the coming days.

And what about elections?

Regional elections have been called for 21 December with a poll published on Sunday indicating that the pro-independence parties will lose power. However, the margin is narrow and fired Catalan leader Carles Puigdemont is welcome to take part.

But they said Europe was stable…

Spain is in political turmoil. If any of this was happening in Africa, you can just imagine the headlines. Truth is, Spain is loaded with separatist regions which all have some degree of autonomy. Catalonia always had the most. But the complication does not stop there. The “illegal” referendum actually represented the views of a minority since more than half of the region’s registered voters did not cast a ballot. Some who did not vote – and who are against succession – have expressed concerns that their views are being suppressed or ignored.

Has anybody actually recognised Catalonia’s independence?

No word from Baleka Mbete, but there was an interesting development on that all-important benchmark for foreign relations – Twitter. One (unverified) account claiming to be the Gambia Ministry of Foreign Affairs sent a number of Tweets congratulating Catalonia on its independence, only to be rebuked by another unverified account accusing it of being “fake”.

Britain and the United States rejected the vote of independence, but the Scottish Government said it “understands and respects the position of the Catalan government” and that the region’s people “must have the ability to determine their own future”.

And where is the European Union?

Donald Tusk, president of the European Council, said that nothing changes for the European Union after the vote and declaration of independence.

“For EU nothing changes. Spain remains our only interlocutor. I hope the Spanish government favours force of argument, not argument of force,” Tusk said.

However, speaking to SkyNews, Josep-Maria Terricabras – a Catalan Member of the European Parliament (MEP) – said the EU parliament is a “club of states” that protect each other.

“They’ve done this again and again over history when in Estonia, Latvia, Lithuania, they said ‘no, you are not new countries, you are not free countries, we are not going to recognise you’. Then, some weeks later, they recognise them, they accepted them and they are a member of the union.

“When our leaders in Europe say ‘yes, perhaps tomorrow’, they will say no. I’m not afraid about that and I am not surprised at all.”

What about Barcelona and La Liga?

Ah, yes. Politics and sport. That old chestnut. As with everything else surrounding this crisis, there is plenty of uncertainty. On Friday, Andreu Subies, the president of the Catalan Federation, told MARCA that “nothing will change”.

La Liga president Javier Tebas, on the other hand, isn’t too keen on the whole independence thing and little under two weeks ago Reuters reported that the crisis was holding up TV rights deal negotiations.

Photo: A sign reading ‘Coup Minority, Fascists’ stands out between Spanish flags during a protest called by the Societat Civil Catalana (Catalan Civil Society) under the slogan ‘We all are Catalonia’ against the unilateral declaration of independence (UDI) proclaimed on 27 October by the Catalan Parliament, in Barcelona, Spain, on 29 October 2017. Photo: EPA-EFE/Javier Etxezarreta