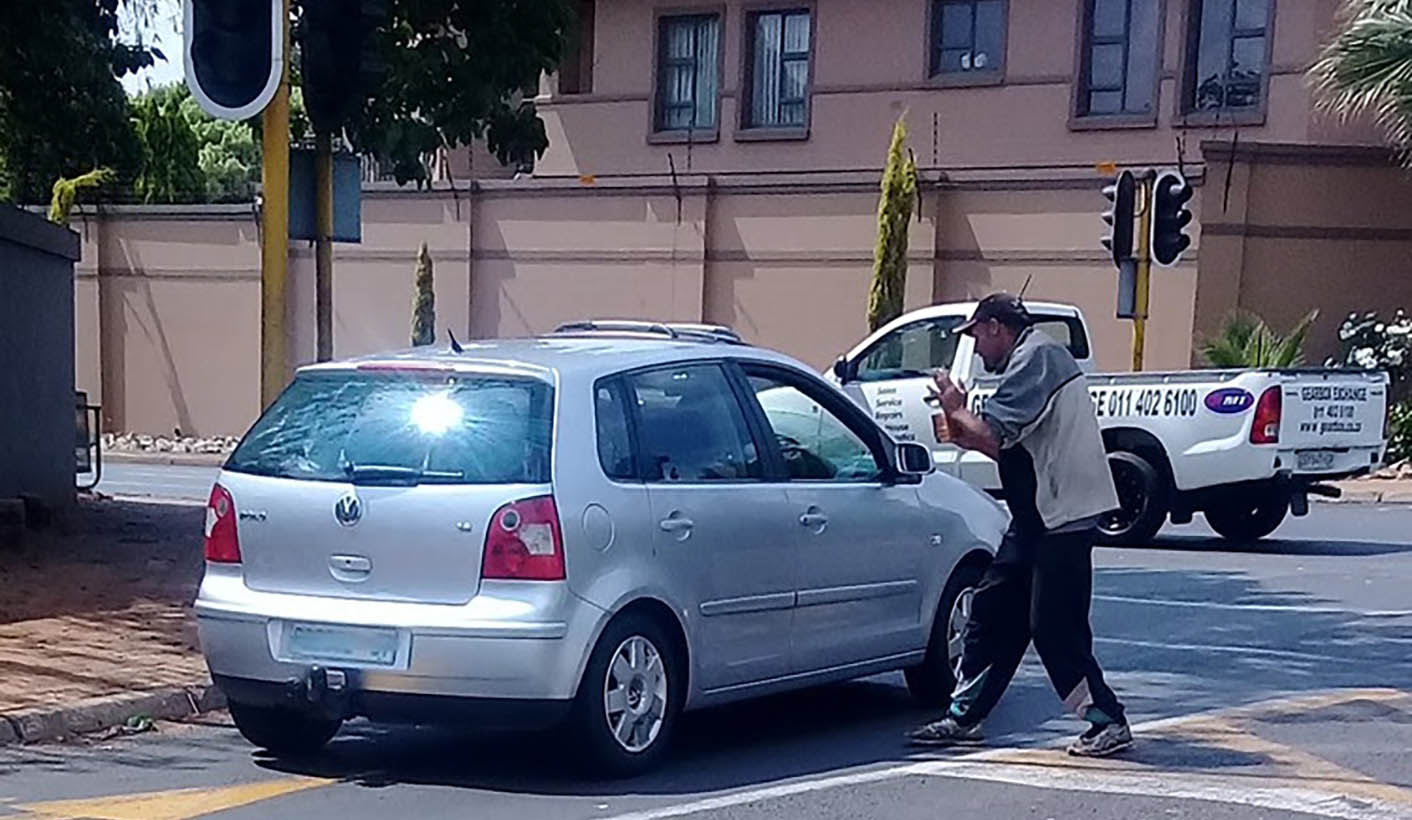 Fuelled by rhetoric on crime, attitudes to beggars all over the country are hardening. By Ian Broughton for GROUNDUP.

It’s a cold spring morning in Bedfordview, and it’s not going well for Warren Roman, 40, who begs at an intersection near Eastgate shopping centre.

He and a newspaper vendor make a fire to warm their hands, attracting curious glances from passing motorists.

Warren is discouraged. After nearly two hours he has a “sad pile of small change”. He glances nervously at traffic coming from all directions, constantly looking for vehicles bearing the markings of either Metro police or SAPS. He fears being chased away before he reaches the monetary target he sets for himself each day.

This has become a regular occurrence, increasing in recent months. Warren and others in the area know that at any time they may be forced to move, abandoning their only means of survival.

He begs at this intersection after private security guards chased him away from robots near the Bedford shopping centre, threatening to “moer” him. A blind woman and her male helper have also been banned from begging at the same intersection.

Warren says begging is currently his only way to survive. Although not homeless, he has no income to pay for rent, food and daily living expenses.

On a good day he makes up to R150 but a bad day could mean less than R50 for six hours of enduring freezing cold mornings, rain, or a blazing hot afternoon sun, being harassed by cops and sometimes insulted by motorists.

He says local authorities and some motorists have become more unfriendly, even a bit aggressive.

This surprised Warren at first; he remembers better days when many motorists greeted him with a smile. He couldn’t fathom why once-friendly people suddenly ignored him or gave disapproving looks.

Later he discovered that he and other beggars have been regularly portrayed in newspaper articles and on the Internet as lazy drop-outs not interested in working, who attract crime to the area. A recent Facebook post really irked him

“It was completely devoid of any truth whatsoever,” he says.

“There are still good people out there who help, but things have changed a lot.”

GroundUp spoke to several other beggars who complain of intimidation, threats of assault, arrest and incarceration.

More than a dozen beggars frequent intersections in Bedfordview and neighbouring Kensington. But their days may be numbered if authorities and certain community members have their way.

By-laws in general have made life hard for those at the very bottom of society’s pecking order and an anti-begging campaign has been targeting beggars at intersections for more than a year. The campaign, in which residents have taken to the streets in a public protest, has gained momentum recently and often uses social and print media to try convince people not to support beggars.

There have been claims of beggars being aggressive towards motorists, using drugs, and of their involvement in theft, smash-and-grab robberies, and even aiding hijacking syndicates.

Although drugs and crime do enter the picture, some beggars say the issue has been exaggerated and no distinction made between those trying to survive honestly and those posing a threat.

Ricky De Lange, 48, says he was once fined R500 for begging at a Bedfordview traffic light. He says he is not a criminal, drunkard or drug user but is sometimes treated as if he were all three. Once a successful builder in Fourways, he fell on hard times following a traumatic divorce and is now homeless.

To avoid the begging stigma, he tried selling samoosas and self-made biltong. He says he didn’t sell a single packet of biltong. Although he did better with the samoosas, it was only because almost all of them went to a single sympathetic motorist who, Ricky says, “was about the only person willing to give me the time of day”.

The Bedfordview scenario seems to be part of a national trend which includes the enforcement of by-laws labelled by some critics as being “anti-poor” (see here and here) making criminals out of marginalised people.

Beggars at traffic lights in cities countrywide are increasingly being considered as yet another manifestation of “crime and grime,” along with homeless people and even hawkers. GroundUp has reported on similar scenarios in Cape Town and Durban, where homeless people were described by a councillor as “a scourge”.

Alana Potter, director of research and advocacy for the Socio-Economic Rights Institute (SERI), says cleaning up “crime and grime” is a catch phrase employed by the City of Johannesburg “to justify everything from unlawful evictions to police harassment of anyone informal”.

“Criminalising the most vulnerable residents of the city is not a solution.”

In March this year, City of Johannesburg councillors called on the Johannesburg Metro Police Department (JMPD) to enforce by-laws more rigorously. They were concerned about window washers in Sandton and other areas who were apparently aggressive towards motorists.

The JMPD has conducted massive clean-up operations before but their “”jackboot style” was met with a barrage of criticism; one operation was even halted by a Constitutional Court order.

Beggars GroundUp spoke to think another clean-up operation is inevitable sooner or later and fear being permanently barred from their only source of income and food. Although there have not been any big operations for a while, beggars say individuals from the Metro police and SAPS still regularly chase and threaten them.

And they are not only afraid of the police. Strong-arm tactics used by public-private partnerships such as City Improvement Districts and Community Policing Forums have also been criticised, as well as those of private bodies.

At any of the intersections near the Bedford Centre shopping mall beggars risk the wrath of private security firm Night Guard, employed by the centre. (Night Guard has not responded to requests for comment.)

Several beggars say they have been threatened, sworn at and chased away by security guards. They also claim that a security company employed by the Bedford Body Corporate has ordered beggars to vacate the intersections.

“Often the private sector will exert significant influence in the enforcement of by-laws. Thus, you may find that by-laws are more rigidly enforced in area where there is an active Community Policing Forum,” says Wits Law Lecturer Thomas Coggin, who is also the editor of the Urban Joburg blog.

Coggin says that the law in South Africa appears to be applied informally and irregularly. “Most of the time, the prohibition against begging is completely ignored by the state, but every now and then the state comes down with brute force on what is ultimately a marginalised community.”

“You could argue that the broad prohibition against begging infringes people’s rights to dignity and life. For many it’s a vital source of income, without which they may find it difficult to survive or live a dignified life,” he says.

Bedfordview’s chief anti-begging campaigner, Leon de Bruin, was one of the residents behind the protest last year. Although he has been quoted numerous times in local newspaper articles linking beggars to everything from aiding and abetting hijacking syndicates to smash-and-grab crimes and using drugs, he declined to comment when GroundUp spoke to him.

The chairman of the Bedfordview Community Policing Forum meetings also declined to comment.

Sarah Charlton, a lecturer at the Wits Centre for Urbanism and Built Environment Studies, and co-author of a Daily Maverick op-ed, The double dehumanisation of an unequal society, disagrees with the crime angle. “I don’t see how begging attracts crime. If crime, in the sense of real threat to people rather than a technical by-law infringement, is properly identified, it should be targeted and intercepted,” she says.

“We sometimes see this inappropriate conflation in other spheres – for example homelessness, or people sleeping rough,” she says. “We need to be alert to, and very cautious of, strange inversions where the resourced are being shielded from the have-nots – or where the resourced are using their power, money and influence to appropriate and effectively privatise even street corners and intersections.” DM

Photo: Warren Roman says begging is currently the only way he can survive. Photo: Ian Broughton

When is childcare an essential service and when not?

Covid-19 responses in Africa must include migrants and refugees