Crime Stats Analysis: The SAPS – while seeking solutions – is part of the problem 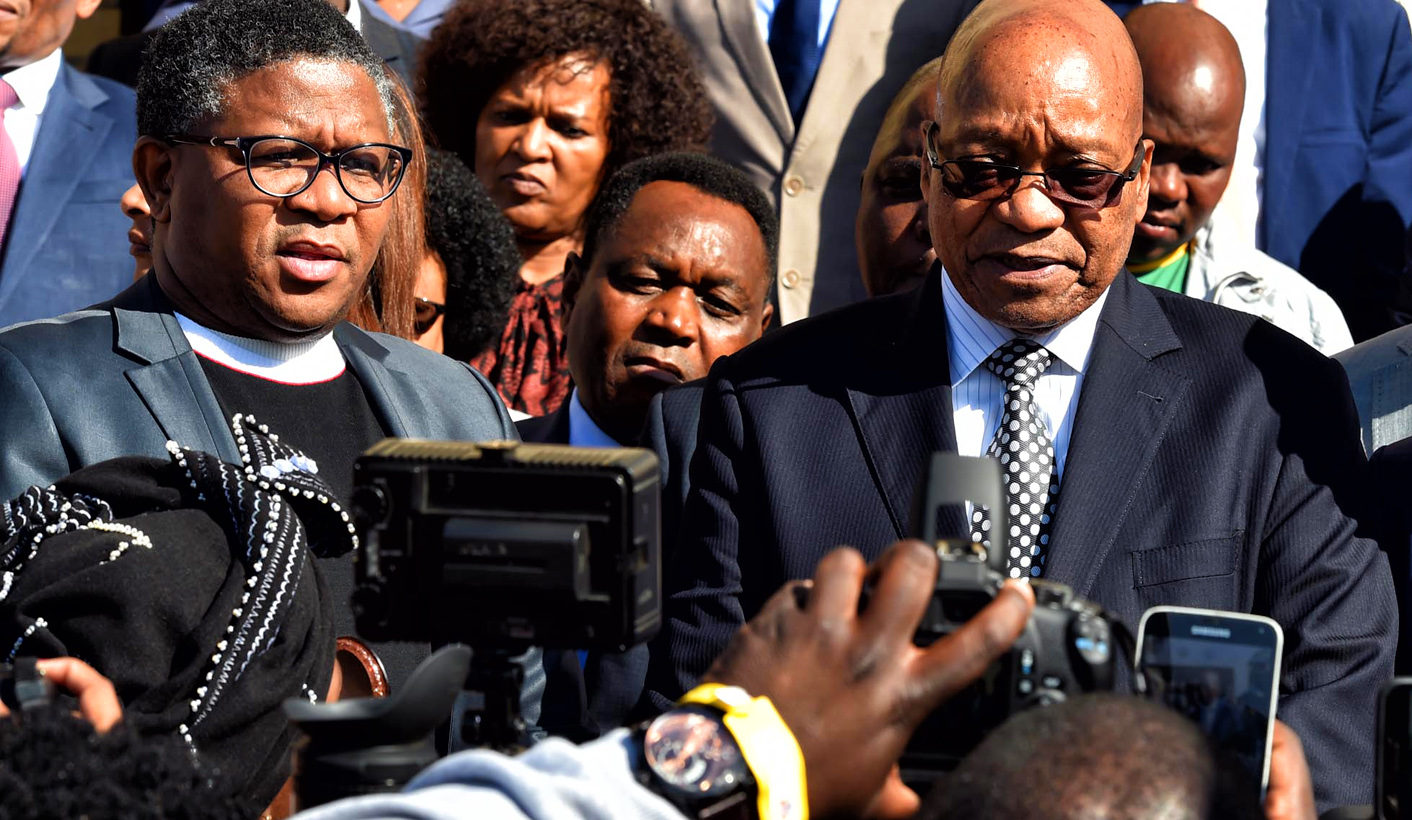 The long and short of South Africa’s crime statistics is that murder is up, as are home and business robberies, carjackings and stock theft. The SAPS recorded 1,738,980 incidents of crimes – including 39,828 reported rapes and 6,271 sexual offences – between 1 April 2016 and 31 March 2017. But crime statistics depend on South Africans reporting crime – many do not, according to the Victims of Crime survey – and the numbers remain mired in politics. And so tensions bubbled close to the surface on Tuesday as the SAPS generals could no longer bluff their way through telling a good story. By MARIANNE MERTEN.

Police Minister Fikile Mbalula – Razzmatazz or Mbaks – conducts much of his public business on social media; to wit, his recent launch of #MyPoliceStation, a campaign to report service delivery failures, or in less politically correct language, the pulling of rank when the local women and men in blue don’t do their jobs. But he’s also pounding the streets, whether in Lusikisiki, Eastern Cape, to open a police station because communities complained of gangsters running at large, or to introduce a new station commissioner in Philippi East on the Cape Flats after 18 people were killed over 17 days in September as the SAPS sat on its hands.

And so Mbalula could tell MPs of Parliament’s police committee that residents in Vanderbijlpark, Gauteng, had long complained about a brothel to the local police station and that they were still waiting for some action from the SAPS. Such “surprise visits”, according to the minister, are part of holding the SAPS accountable, publicly. “As we go around to the communities, the refrain is lack of service, lack of service, lack of caring.”

There are concerns that Mbalula is stepping into operational terrain, and eyebrows are raised over his Twitter habits and comments like “squeezing the balls” of criminals. But, critically, for the first time in many years the SAPS management is confronted with a minister who is out and about, and who is not shy to call them out.

“There are people tapping phones, but they are not vetted… This is anarchy. When I question the SAPS, they want to argue… We are running a rogue state,” Mbalula told MPs, adding that vetting had become the tool of trade in the office politicking of the SAPS. “This vetting has been done for political reasons. If they don’t like you, you are not vetted. If they want to get rid of you, they use it (vetting).”

The 20-plus SAPS generals who came to Parliament for the crime statistics briefing sat silently on the benches of Room 12A, leaving the talking to three or four officers. Some looked as if they were taking notes; others intently peered at their phones.

But it’s no longer as easy to continue with the age-old SAPS tactic of keeping a straight face while continuing with business as usual to frustrate efforts to ensure the SAPS is actually providing a service as required by the Constitution – to protect all who live in South Africa, and their property, prevent and investigate crime and to ensure that all not only are safe but also feel safe and secure.

Remember businessman turned SAPS CEO Meyer Khan, who ended his two-year contract in July 1999 with charge offices known as client service centres, but frustrated at just about every other turn in bringing about policing reforms? Or how the community policing forums (CPFs) that were meant to herald democratic South Africa’s community-orientated safety and security were scuppered by the women and men in blue, who more often than not took exception to being questioned by residents as to why unlicensed shebeens and drug dens were not closed down or gangs stopped.

For too long a blue uniform signalled power, and that power was not necessarily put to use for the public service and publicly accountable policing that’s required in a constitutional democracy.

Being called out by Mbalula, and not only in private meetings, may now be causing some tensions and disquiet. Not that the SAPS doesn’t try to continue with their standard operating procedure of evasion and bluster.

When asked about the 1,448 SAPS members found with criminal records as far back as early 2016, SAPS deputy national commissioner for human resource management, Lieutenant-General Bonang Mgwenya, rattled off statistics that actually revealed how little was done. A total of 17 were dismissed, 89 are currently before disciplinary hearings, while 296 had retired without consequences and others were allowed to resign. In 277 instances the police officials’ criminal records were expunged, while in another 148 cases the SAPS was “purifying the information involved”.

Ministerial frustration emerged later at a media briefing. Such matters should no longer be talked about, Mbalula said somewhat grumpily, they are old and should have been dealt with, decisively. “All of the things I talked about must happen. I don’t want to repeat the same things next year,” he said.

Getting things done is part of the battle of perceptions around policing. And Mbalula – he backtracked somewhat on his squeezing of criminals’ genital commentary in favour of “decisive action” and police “progressively acting within the context of the law” – is keenly aware of the perceptions of (non)policing. “Perceptions are addressed by practical work, not theorising or arguing.”

In late September Statistics South Africa released its Victims of Crime survey showing, first, that South Africans felt unsafe and unprotected even as crime dropped by two percentage points in the 2016/7 financial year compared to a year earlier and, second, that there was a consistently low level of confidence in policy.

And that translated into simply not bothering to report crime. Only 51.2% of those whose home was broken into reported it to police, as did 56.7% of those who experienced home robbery involving violence, and only 30% of thefts of personal property were reported to police.

According to the survey of just over 1.1-million households across South Africa, the most frequent reason for not reporting these crimes officially, cited on average by six out of 10 victims of crime, was that police would not or could not do anything. “This could be an indication of lack of confidence in the police, and follows the same pattern as the previous where 58% of households gave the same reason for not reporting housebreaking to the police.”

On Tuesday, however, the SAPS held the line: it is only concerned about reported crimes [Note: crime statistics, including those from station level, are available on the SAPS website. It was an administrative process, explained Crime Registrar Major-General Thulare Sekhukhune, in which “all crimes are recorded as and when they are brought to the attention of the police”.

Those crime incident reports closed as “unfounded”, or when police could not detect elements of crime, were kept on a separate database. Those figures were not immediately available on Tuesday.

When asked whether it was not a concern that not all crimes were reported to police, acting national police commissioner Lieutenant-General Lesetja Mothiba emphasised that the SAPS could only deal with what is reported to them. “We call upon our people to report crime. All crime must be reported.”

Even if Statistics South Africa’s Victims of Crime under-reporting levels are found to be too high – women’s rights organisations and civil society have long argued that for every reported rape at least nine and up to 27 others are not reported – the official crime statistics are an at best limited reflection.

Murder is the exception, a crime that as a rule is accurately and fully officially recorded. There were 19,016 recorded murders in the 2016/17 financial year, or 343 more than in the previous year. Over the long term there is a slight drop in the murder ratio per 100,000 population, but that can be ascribed to South Africa’s growing population, now at 55-million people.

Those murdered included 2,639 women, 574 boys and 265 girls, according to the 122-page Annual Crime Report 2016/17 tabled in Parliament. That means almost one in five murders is that of a woman or child. A provincial breakdown shows 618 women were murdered in KwaZulu-Natal, 497 in Gauteng and 476 in the Eastern Cape.

According to the police, “social interaction between individuals that goes wrong is still a prominent contributor to the murder statistics”, as is domestic violence. For example, at Wellington, Western Cape, 89.5% of murders “resulted from incidents of domestic violence and arguments”.

Police also named the top murder police stations, with all but three in the Western Cape, headed by Nyanga at top spot. In second and third place are Inanda and Umlazi, KwaZulu-Natal, where murders increased by 22.5% and 20.6% respectively in the 2016/17 financial year. KwaMashu, KwaZulu-Natal, comes 10th. Umlazi is the area under which Glebelands hostels falls where over the past two years over 92 people were killed, according to testimony before the Moerane Commission of Inquiry.

And so questions emerge as to how police deploy their resources, particularly as the annual crime statistics narrative shows clear knowledge of when and where murders are most likely to occur. Broadly speaking, that’s over the weekend, particularly between 03:00 and 06:00, with some provincial peculiarities, and mostly on streets, roads or public open spaces like velds and areas near shebeens.

Tuesday’s crime statistics show right now that the SAPS, despite its R87-billion budget, is part of the problem. The question is whether Mbalula has the energy, stamina and political suss to continue challenging the SAPS’s organisational laissez-faire attitude and break down institutional resistance.

Getting the police to police as they must in a constitutional democracy – and be publicly accountable, not only to MPs, but the public and communities – will be an uphill battle. DM