#CapeWaterGate: Demand for boreholes rises as dam levels sink to 35% 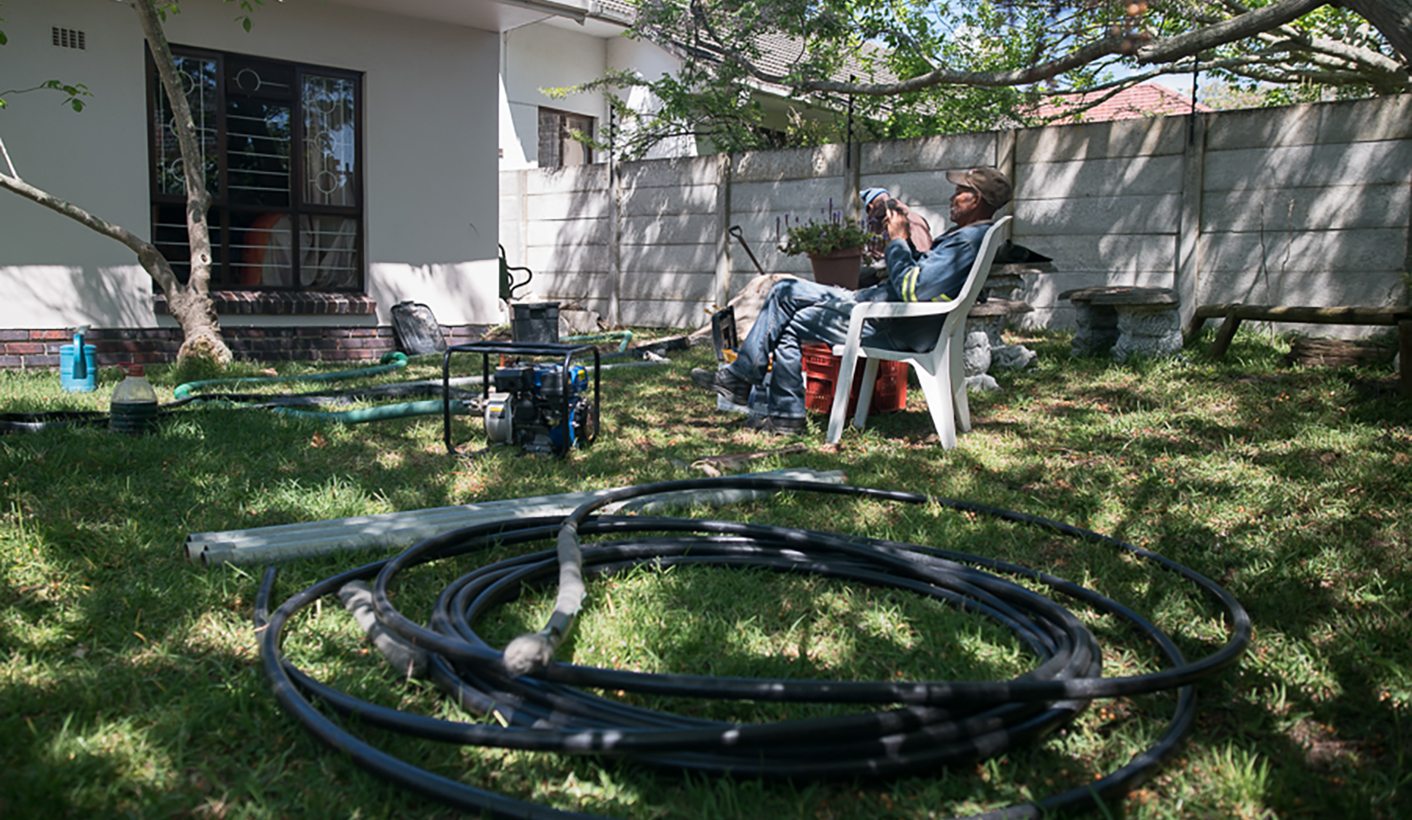 Cape Town is well into Phase One of its Water Resilience Plan with dam levels at 35% and usable, safe drinking dam water sitting at around 25%. By comparison, dam levels were 62% this time in 2016. Despite critical dam levels, collective consumption is still over 600-million litres of water per day. Water-wise domestic users are turning their attention to groundwater to reduce some of the pressure on municipal water sources – but what are the options and how deep into their pockets do consumers have to dig for boreholes and well points? By Leila Dougan for CHRONICLE.

The City of Cape Town recently outlined its plan to drill boreholes into surrounding aquifers in order to augment the current municipal water supply. But they’re not the only ones tapping into underground water sources. An increasing number of households are investing in boreholes and well points to reduce pressure on the municipal water system.

The drilling industry has boomed over the past few months and getting a drill rig into the back yard doesn’t come cheap. The price tag starts at R60,000 and could run up to R120,000 depending on the depth of the borehole, the amount of materials to be used, the size of the property, the type of rock that needs to be drilled through and what the water will be used for.

If it’s a matter of watering the garden it’s a fairly simple exercise. But if you’re looking to hook up your toilet and shower, for instance, the drilling, filtration and plumbing could set you back by over R150,000. Want to use the water to fill your pool? Water quality tests will need to be done – and so the list goes on. Keep in mind, this is only in a case where there actually is water to be found. Drilling companies will charge a fee even if no water is found.

“People think the work we do is for free but we have to pay our labour, time and materials used and that’s not free,” says Jean Pierre de Wet from De Wet’s Boreholes. He charges a “no water” fee of R25,000.

Andries van den Berg runs Iceberg Aqua. His company has been going since 2015 and charges anything between R90,000 to R120,000 to install a borehole including registration and a certificate of compliance. He says well points are much cheaper, and can cost as little at R5,000.

Dr Roger Parsons, Chair of the Western Cape branch of the Ground Water Division of the Geological Society of South Africa, says the use of groundwater should be encouraged to irrigate sports fields, parks and gardens in order to reduce pressure on the municipal system, especially because groundwater has not been significantly affected by the drought. The surface may be dry but there’s water beneath our feet and by tapping into that source, homeowners are making an “indirect contribution” to the overall water supply.

He stresses that a lack of awareness about the dangers of drinking contaminated underground water is a real concern. Essentially, don’t drink it if you haven’t had it thoroughly tested and treated. “In an urban environment there are a host of possible contaminants, including the leaking of sewerage pipes,” says Parsons.

“It is highly possible that significant numbers of residents made use of unregistered boreholes before restrictions were passed, and only took steps to register the boreholes due to increased awareness and enforcement,” said Limberg.

Due to increased drilling the City is tightening measures on the use of groundwater, with restrictions already in place for consumers who currently use the finite resource. Residents must apply for a new borehole or well point at least 14 days before they are sunk and registration is required for “environmental research and monitoring purposes”. Once registered, a sign must be displayed on the property. Furthermore, borehole and well point water users are encouraged to use this resource for irrigation purposes only on Tuesdays and Saturdays before 09:00 or after 18:00 for a maximum of one hour.

Parsons says the City is responsible for collecting data on boreholes and well points and even though domestic extraction is encouraged, dropping water tables could be a real concern in the future if drilling data is not adequately collected.

“You can’t manage what you don’t measure. We have good data on large extractions, but the small-scale extractions we don’t really know about… We need to know how much groundwater is being abstracted so that we can manage the resources better. As yet the aquifers have not been impacted by the drought, but at some point this will change – particularly if groundwater use increases significantly,” says Parsons.

“We are entering extraordinary times, and we need to think strategically regarding how groundwater can best be used in the current crisis. Neither the banning of groundwater use for domestic supply nor a wild free-for-all will help us through the summer,” says Parsons.

The City had not responded to specific queries at the time of publication. DM

Photo: Piping is prepared for the installation of a well point in a domestic garden in the Southern Suburbs of Cape Town this week. Photo: Shaun Swingler.