Analysis: Facing factionalism, scandal and a water crisis, is the DA becoming an ANC-lite? 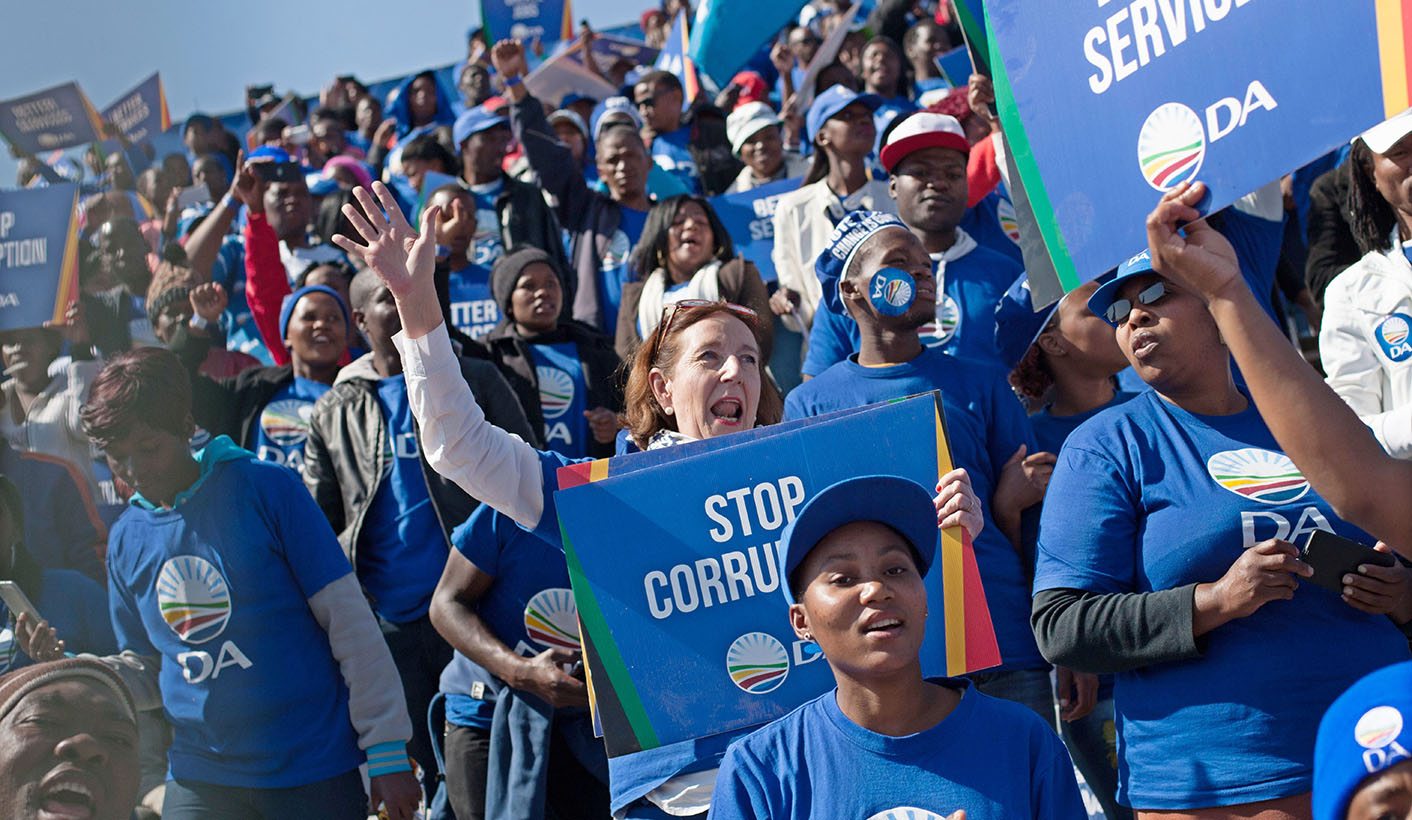 Factional infighting. A potential scandal involving a politician’s private residence. And a crisis that will affect the provision of basic services to millions. These have been the hallmarks of ANC governance – but they also describe the issues currently facing the DA. Can the country’s largest opposition party avoid the pitfalls of power where it eventually governs? The DA has the opportunity to demonstrate in practice its contrast to the ANC – but how different does the picture really look? By REBECCA DAVIS.

The Democratic Alliance, as leader Mmusi Maimane reminded delegates at the party’s Western Cape provincial congress last weekend, has made one central promise to voters in every election.

“This promise is that the DA offers the people of South Africa a complete change from the disaster of the ANC government,” Maimane said. “Not an incremental change. Not better in certain aspects of governing. Not a bit more responsive or a bit less corrupt. Complete change.”

Yet the truth is that there are more than a few echoes of the ruling party in the way in which the DA is currently handling its business.

To take one example: the allegations which surfaced over the past week regarding upgrades to Cape Town mayor Patricia de Lille’s private residence. This is a story which has been leapt on with alacrity by the opposition ANC in the Western Cape, but it’s worth bearing in mind that the original messenger for the rumours came from within DA ranks, in the form of councillor and De Lille nemesis JP Smith.

It has been a messy tale from the outset. Smith reported that members of a special Metro police unit had claimed that “building work outside of the security policy of the city had been undertaken at her home at the expense of council”.

Both De Lille and the City of Cape Town proceeded to strongly refute the claims – but with conflicting explanations.

“Regarding renovations at my house, these were paid for by myself and I am prepared to make the proof of these payments made by myself known as part of the proper legal processes,” De Lille said in a statement.

That statement was made mere hours after City of Cape Town Speaker Dirk Smit stated that the work on De Lille’s house was indeed paid for by council following a security assessment.

So who paid: De Lille, or the City of Cape Town?

The ANC in the Western Cape seized on De Lille’s statement that she had personally footed the bill and termed it an outright lie, with councillor Xolani Sontashe providing journalists with an invoice which indicated that security gates had been installed at De Lille’s house at a cost of R140,139.98 and billed to the City of Cape Town. The ANC suggested the total cost of security upgrades may have been R700,000.

This prompted another furious statement from Speaker Smit, clarifying that R451,000 “was paid by Council for security measures only”, as prescribed by the South African Police Service.

When the ANC proceeded to march on De Lille’s house, Smit further stated that the sharing of images of her home, together with the receipts of the security measures, meant that he would “have to deploy the City’s VIP protection services to the Mayor’s house 24 hours a day”.

There are two points to be extracted from this unedifying situation.

The first is that it is entirely possible that nothing untoward has occurred at De Lille’s house, since politicians are entitled to security measures. The source of the conflict between the City’s explanations and De Lille’s explanation may be that there were two forms of work undertaken on her residence: general renovations, for which the mayor paid personally, and publicly funded security upgrades. De Lille was possibly referring to the former in her statement, and the City to the latter.

This is charitable speculation, however, because the DA has done a spectacularly bad job at putting the matter to bed. When Daily Maverick contacted the mayor’s office for clarification late last week, we were told that the mayor could not comment on the issue in any way – as it was a condition of the special leave on which she and JP Smith have both been placed by Maimane.

As a result, the matter remains ambiguous – even though one would think that it might be relatively easy to clear up if nothing dodgy has taken place.

The second point is that the DA-run City’s handling of the matter has been curiously reminiscent of the ANC’s when confronted with the Nkandla scandal: from refusing to allow the matter to be broached in the provincial legislature, to warning the public against sharing pictures of the residence in question due to security concerns. When the ANC asked the media and the public not to circulate pictures of Nkandla, erstwhile DA parliamentary leader Lindiwe Mazibuko called it “an assault on freedom of expression”.

Of course, the De Lille saga is nothing like the Nkandla situation in scale or significance. But for a party advertising its difference to the ANC as its unique selling point, the DA has shown itself on this point to be as imperious and criticism-averse as its rivals.

The fracas about De Lille’s residence has played out against the backdrop of fierce infighting within the Cape metro, one of four metros that the DA now governs countrywide. There have been reports of a police unit gone rogue, a possible conspiracy in the murder of a DA councillor, and tensions between those allied to De Lille and an older DA guard. It was this which culminated in the suspension of De Lille and Smith from DA activities last week. New DA Western Cape leader Bonginkosi Madikizela confirmed to Daily Maverick last week that he will have to unite a province currently fraught with internal conflicts.

Yet all of this may soon matter very little – in the face of a Western Cape water crisis shaping up to be the province’s worst disaster in the democratic era. This is where the rubber really hits the road, when it comes to the DA’s repeated claims to be able to govern more effectively than the ANC. This is their greatest test to date, and one which the electorate is unlikely to forget.

The DA cannot be blamed for poor rain in the Western Cape, but amid reports that the City of Cape Town has been aware of the impending water crisis for some years, there is every indication that the situation has been badly mishandled. In its pursuit of development at all costs, a DA provincial government may find itself unable to provide citizens with the most basic of all resources: water. The social and political fallout from such a scenario would be disastrous.

Some may argue that the DA’s traditional support base would be unlikely to place their vote elsewhere, but they may also simply show their dissatisfaction by staying away from the polls altogether.

Both metaphorically and literally, that water is looking awfully scant at present. DM

DA supporters attend the parties final pre-election rally in Soweto on 30 July 2016, ahead of the municipal elections on August 3. Photo: EPA/STR