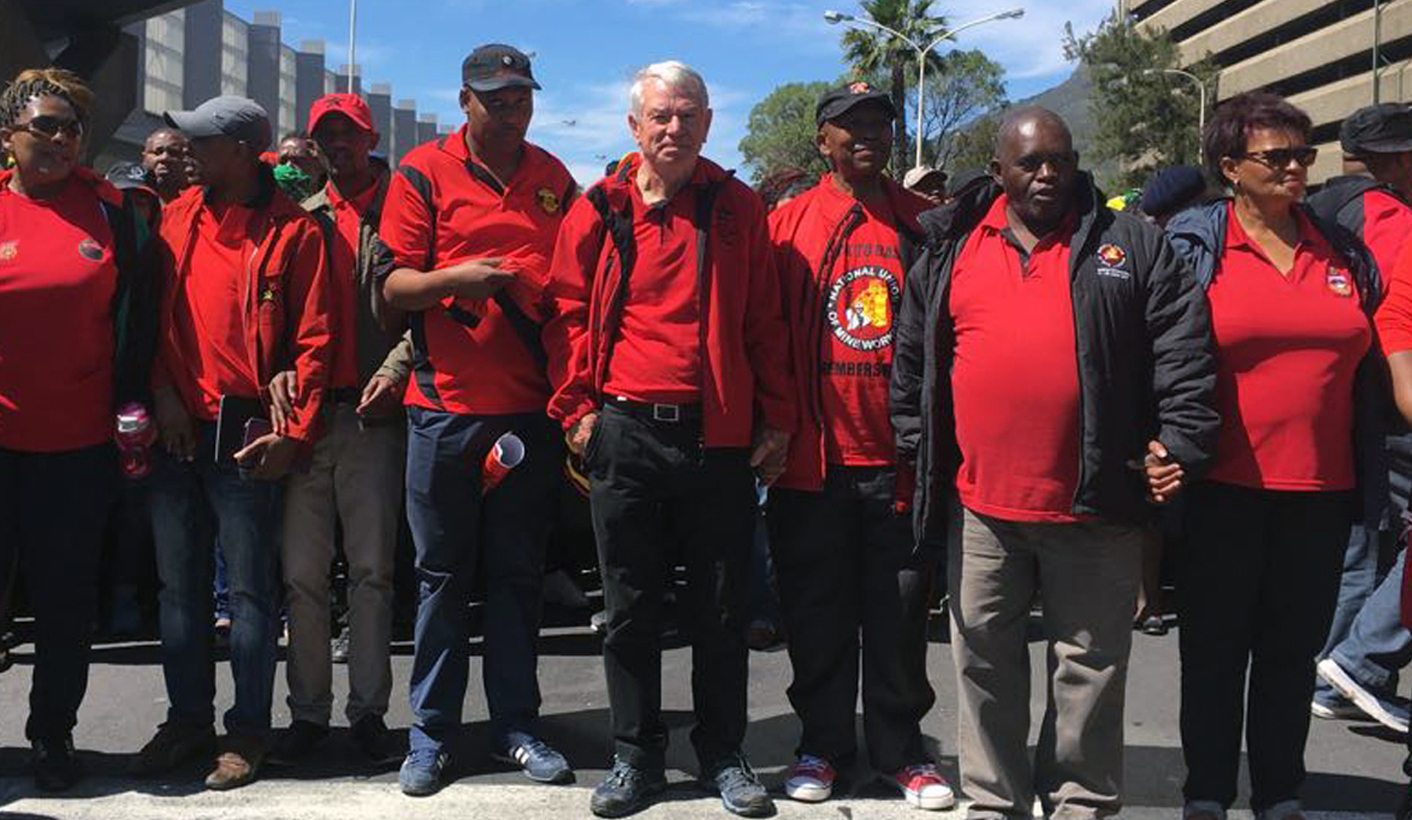 Mass anti-state capture protests across the country got off to a slow and staggered start in Johannesburg and Cape Town this morning, with Cosatu and the SACP failing – at least initially – to draw expected numbers. By REBECCA DAVIS, ORATENG LEPODISE, BHEKI C SIMELANE and PUSELETSO NTHATE

South African Communist Party and Cosatu leaders rallied this morning to gather the crowds for 13 anti-corruption marches scheduled across the country.

In Cape Town, crowds failed to materialise in the numbers previously predicted by Cosatu provincial leadership.

Some marchers were delayed in their arrival by, ironically, the train system they were travelling to protest against. Outside Cape Town’s central train station, Cosatu Western Cape boss Tony Ehrenreich delivered a memorandum of demands to a Metrorail representative. Among them: half-price train tickets, more buses and taxis to service the Cape Flats and townships, and a proper public transport system in rural areas.

“Down with Zuma down!” shouted a crowd led by leaders from Cosatu and the South African Communist Party, including deputy Secretary General Jeremy Cronin. “Up with Ramaphosa up!”

A Cosatu supporter at the march said that countrywide, they would easily draw 100,000 protesters.

In Johannesburg by lunch time, around 5000 members had gathered for the strike against state capture. First stop: City of Johannesburg offices. Marchers say they are tired of President Jacob Zuma and corruption.

The strike got off to a slow start outside Cosatu house. As the numbers swelled the march proceeded to the City of Johannesburg Municipal offices.

“I am here today because I am tired of corruption and our President. He is failing us as a nation. It is time he stepped down (to) allow Ramaphosa to clean the mess he has created,” said Thembisile Sikade, a 38-year-old who works at New Vaal Colliery.

Cosatu, supported by the SACP, embarked on the protest after a stream of corruption allegations revealed in the Public Protector’s State of Capture report and reports on #Guptlaeaks.

In the list of their demands to Johannesburg mayor Herman Mashaba the party wanted: access to water and electricity; for the city to review reports from KPMG and for the city to stop working with KPMG; and for workers who were suspended or retrenched to be reinstated.

“I am ready for Ramaphosa to step in now, we are tired of Zuma and his dodgy ways it’s time he gives us back our country,” said Tyra Fortuin, a 29-year-old worker from Helen Joseph Hospital.

Photo: A protester gets his message across loud and clear at the start of the march in Johannesburg. Photo: Orateng Lepodise

From the City of Johannesburg offices the march was due to proceed to FNB Bank City, the Gauteng premier’s office and the Chamber of Mines where protesters were due to deliver further memorandums on corruption and state capture.

Protesters hold placards reading “Zuma Must Go” and “Away with the Gupta’s and associates.” Outside the municipal offices they sang: “We are ready for Ramaphosa.”

The march started at about 11.20am, just over an hour behind schedule. One marshal said the reason for the delay was because members kept arriving. Thousands lined the streets of Braamfontein, propelled by song.

SACP General Secretary and higher education Minister Blade Nzimande was among union and SACP leaders who later addressed the crowds.

Makro workers who have been on strike for about a week now also took part.

But asked why they were on strike, one Makro employee gave a one word answer in an angry tone, “wages”, then “We want better wages”. Mshiya Mkhize, 24, also a Makro employee, says he wants a pay rise at work.

The message of the workers in this song is quite clear. They are declaring their support for Deputy President Cyril Ramaphosa — who Cosatu have made it clear they want as the next president of the ANC.

One Sadtu member who refused to be named said: “We are tired of corruption. We are tired of Jacob Zuma. We have been supportive of Zuma but he’s taking workers for granted. We been in the struggle for far too long to watch ANC sink. We want him to step down.”

The Cosatu strike comes at a time when the country is plagued by corruption by some of the country’s leaders, including President Zuma.

Johannesburg Mayor Herman Mashaba was on his way to Braamfontein to receive Cosatu’s memorandum.

“Those who are messing up our city are here now. If Mashaba doesn’t respond, we are back here,” a Cosatu member said.

Mbali Mlaba, 24, a General Assistant at the Helen Joseph Hospital, said she was there to lend her hand in fighting corruption. “We supported him, but he has totally failed to repay our faith in him-choosing the Guptas instead. I want Zuma to step down.”

As the federation, along with the SACP, further confronts the corruption exacerbated under Zuma’s government, the future of the tripartite alliance hangs in the balance. DM