Cosatu Protest: Future of the alliance on the line 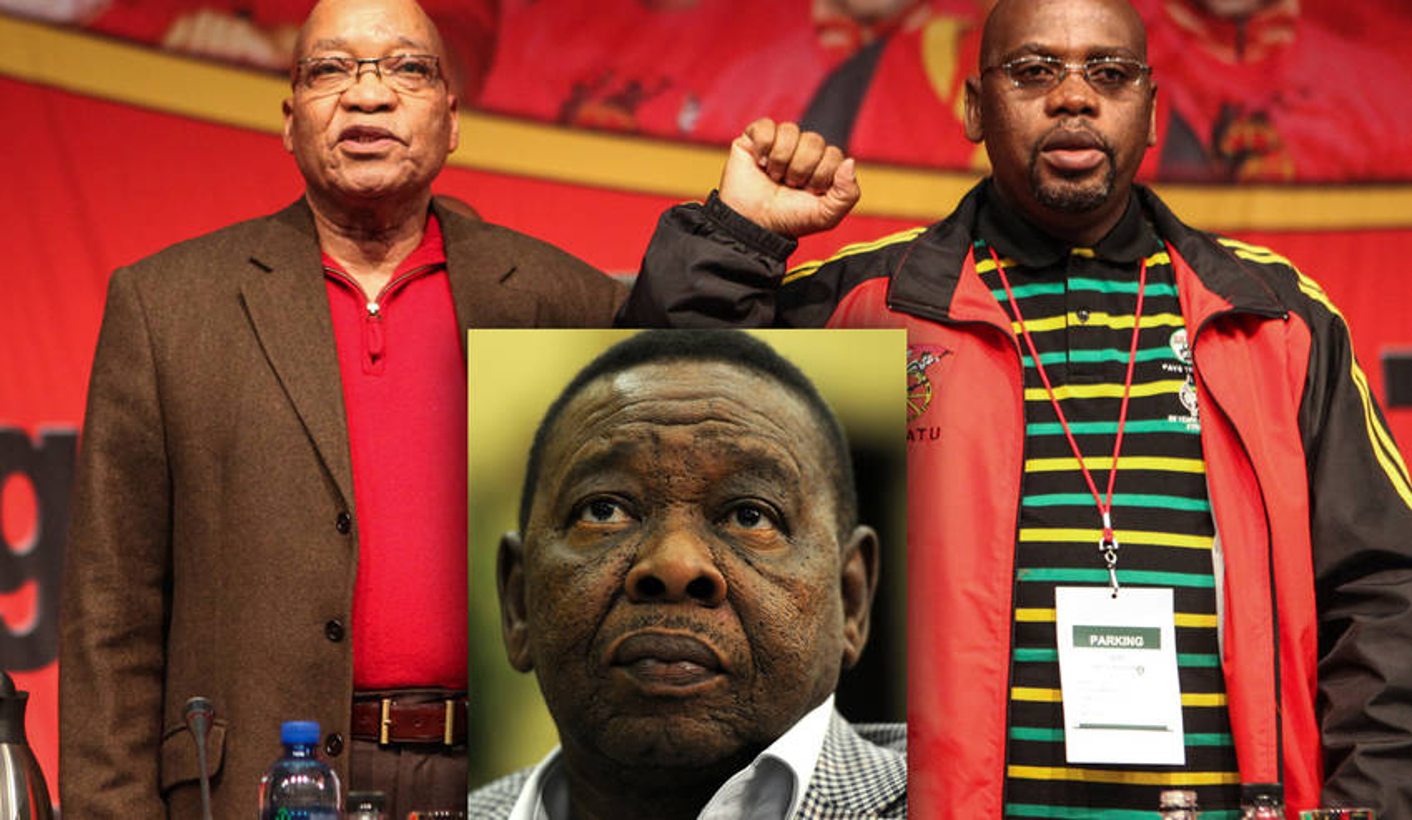 Cosatu will on Wednesday lead marches across the country against state capture. As the federation, along with the SACP, further confronts the corruption exacerbated under Zuma’s government, the future of the tripartite alliance hangs in the balance. By GREG NICOLSON.

Speaking on Tuesday before the federation’s march against corruption on Wednesday, Cosatu General-Secretary Bheki Ntshalintshali described what he viewed as the system behind the current crisis of state capture: capitalism. “The government’s neoliberal policies have weakened the state and allowed the private sector to be in charge of policy formulation,” he said.

The “neoliberal” government is led by Cosatu’s alliance partner, the ANC, and both trade unionists and leaders of the SACP serve in Cabinet. Despite their leaders taking prominent positions, both Cosatu and the SACP’s relevance within the alliance has continued to decline.

They talk left while the ANC repeatedly walks right, with President Jacob Zuma failing to heed their advice. The march against state capture, led by Cosatu and supported by the SACP, may not have a direct influence on the fight against corruption, but it might be a symbolic day for the question of whether the alliance can survive.

“The time to reclaim the electoral mandate that we gave to the ANC is now,” said Ntshalintshali.

The ANC is meant to put people first and for that to happen it needs to tackle corruption. Cosatu and the SACP have for years been trying to have a stronger influence within the alliance, without success. The labour federation has made gains in labour laws protecting workers, but both partners have a declining influence on broader policy and are ignored when it comes to key decisions.

Rival federation the South African Federation of Trade Unions (Saftu) and independent mining union the Association of Mineworkers Union have dismissed the march as a farce. Neither Amcu nor Saftu will join the demonstration. Saftu General Secretary Zwelinzima Vavi, who was expelled from Cosatu, said the federation’s current leaders had failed to acknowledge their role in supporting Zuma and state capture, while they also purged opponents from their unions.

Amcu President Joseph Mathunjwa said, “The corrupt protest is advancing a particular political agenda within the factional debates leading to the December conference.”

He was, of course, referring to the ANC elective conference, where Deputy President Cyril Ramaphosa, backed by Cosatu, is a frontrunner along with Nkosazana Dlamini-Zuma, who enjoys support from Zuma’s allies.

Political analyst Keith Gottschalk said the protest was important. “I think it’s a dramatic swing in history that Cosatu and the Communist Party, who were the main supporters for Zuma in 2007, are now the main opponents against him.”

It could be a shift in confronting corruption as Ramaphosa, backed by Cosatu and the SACP, has been vocal in criticising state capture, unlike Dlamini-Zuma.

Unisa’s Professor Dirk Kotzé said the march could not be expected to have a direct influence on challenging corruption, but it could build pressure after recent public demonstrations against the president and revelations contained in the #GuptaLeaks. But, with the ANC election race so dominant in the alliance, he said, “State capture itself is somewhat lost in the process.”

Political analyst Shadrack Gutto doubted the marches – 13 are taking place across the country – will have any influence. “I don’t think so because Cosatu has been part of the problem. It has been part of the ANC. It has not really challenged the ANC.” He said Cosatu is compromised as its leaders have taken direction from the ANC and the trade union federation remains weakened after it expelled its biggest affiliate, Numsa.

There are very few leaders within the alliance who are not compromised in one way or another. Cosatu’s march, however, symbolises a key moment in the future of the alliance. Cosatu and the SACP have called for Zuma to resign and have barred him from speaking at their events. The relationship has deteriorated to the extent that they can’t even hold joint meetings. Both Cosatu and the SACP are calling for a “reconfiguration of the alliance”. They want to play a stronger role after they were slighted by former President Thabo Mbeki and Zuma, particularly in his second term.

Kotzé said he didn’t see any road map towards reconfiguring the alliance, regardless of who wins in December. He said the ANC’s liberation model, the national democratic revolution, was based on it leading the alliance. “Now to claim that all of them are equal obviously conflicts with that model that many in the ANC are used to.”

Gottschalk said that if Ramaphosa wins in December there could be a revival of the alliance. That’s unlikely to happen if Dlamini-Zuma becomes president, with the SACP already considering contesting elections alone depending on the conference’s outcome.

Gutto believed that unless there’s a split in the alliance the partners will individually remain weak. “As individual institutions, I think that Cosatu is weak, the SACP is weak, the ANC is very weak.”

Gottschalk said that if Dlamini-Zuma wins, the ANC will probably lose campaigning support from its partners ahead of the 2019 national and provincial elections.

The alliance partners played a key role in electing Zuma in Polokwane in 2007, but they failed to win the influence they were seeking. Even if their increased activism helps Ramaphosa get elected, they might continue to be side-lined unless they are able to negotiate greater powers.

“A sort of déjà vu situation can develop for them again,” said Kotzé, who believed it might have been better for the alliance partners to wait to see who wins the ANC race rather than declare their support for a particular candidate. “They might burn their fingers again.”

Cosatu and the SACP have both been more vocal recently in criticising Zuma, his cronies and their allies seeking corrupt enrichment. But unless they can break the alliance mould they’ve willingly participated in, their efforts will come to naught. If they don’t further acknowledge their role in factionalism and state capture, they shouldn’t even bother trying. DM