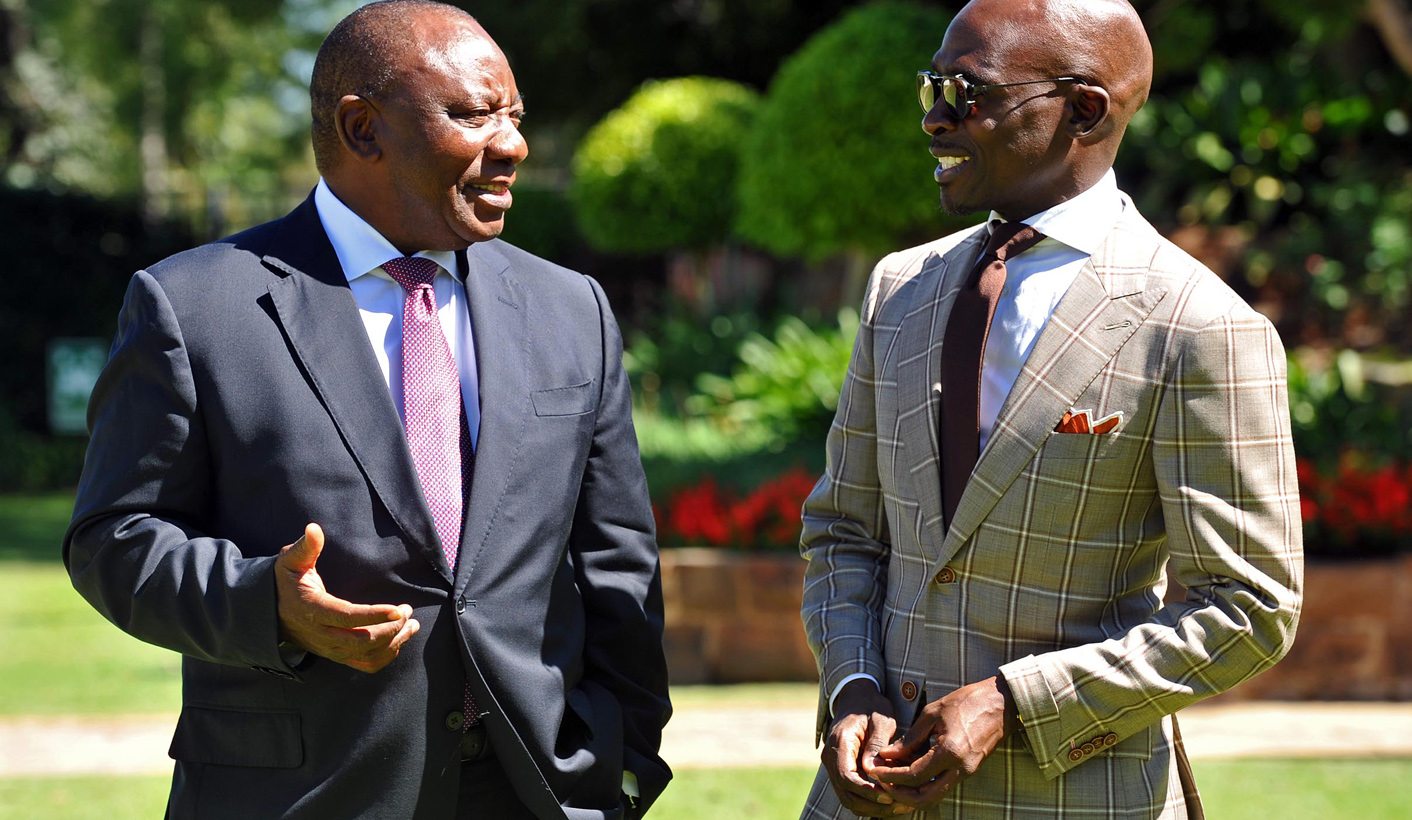 The muddle and political fault lines in Cabinet came into sharp relief over the financially and governance-troubled SAA when the deputy finance minister and the deputy president appeared at odds in Parliament. Central to this was the extension of Dudu Myeni’s term as SAA board chairperson, which the finance committee late on Wednesday resolved must be reviewed because of concerns over its legality. And with just 16 days to go before R6.8-billion falls due for repayment by the national airliner, questions also arose over government’s bailout through a special appropriations Bill that requires public hearings and proper committee processes before adoption. Parliament goes into constituency recess on Friday. By MARIANNE MERTEN.

“There definitely was no Cabinet resolution,” he told MPs. Instead the minister’s decision to allow Myeni – who is also the chairperson of the Jacob Zuma Foundation – to serve until the SAA annual general meeting (AGM) was based on the memorandum of incorporation (MOI) between government and the national carrier of which it is the sole shareholder.

And that’s the line Buthelezi held steadfastly, even as MPs from across the political spectrum expressed concern over this move, given that it was based on a provision allowing ministerial intervention when “the terms of all non-executive board directors expire at the same time” in the MOI. Usually appointments at the top ranks of the public service, state-owned entities (SOEs) and statutory entities are through Cabinet.

“I gave the reason for the extension. The minister wanted to look at it holistically,” said Buthelezi, adding later: “I’m not coming here to defend any decision. I’m here to say why a decision is taken. The reason is the reason… It was not a legal imperative. It was more a business imperative as far as the minister is concerned.”

Some three hours later in the National Council of Provinces (NCOP), Deputy President Cyril Ramaphosa told delegates there: “The matter of appointment of chairpersons of SOEs is a matter that is dealt with by Cabinet. As it turned out, as the board was reconstructed it was Cabinet that dealt with the matter… Leave this matter to the Cabinet…”

He was responding to opposition questions raising the impact of the continued stay of Myeni at the helm of SAA amid public reports that lenders, among others, were reluctant to roll over the R6.8-billion loan repayments at the end of September.

SAA is Gigaba’s crucial test at the helm of South Africa’s finances. How the time-sensitive financial and governance turmoil is handled is set to signal the direction of the finance portfolio to which he was appointed in the controversial March midnight reshuffle. Gigaba is closely associated with President Jacob Zuma, who has appointed the former ANC Youth League president to key portfolios in his administration, including home affairs and public enterprises.

An official letter from Gigaba to Myeni on 1 September, presented to MPs and seen by Daily Maverick, states: “I am pleased to inform you that I have extended your term of office as the chairperson of the SAA until the annual general meeting scheduled for 03 November 2017…”

That AGM, whose date has changed repeatedly, is crucial to resolve not only the financial turbulence at SAA – it must approve the required annual financial statements to ensure the airline remains a going concern – but also a governance commotion including those attributed to Myeni who, according to City Press, has vowed to “stay until uBaba (Zuma) goes”.

MPs were told Myeni’s departure was not a “condition” to any loan renegotiation, but an aspect of discussions that covered various options, including postponing the repayment for a month and, according to Buthelezi, “lenders changing their debt into equity”. He told MPs: “We are looking at everything and anything.”

But at the end of June Gigaba had to step in with a R2.2-billion bailout when SAA failed to renegotiate, or roll over, a loan repayment due earlier. That money was released from the National Revenue Fund, the monies allocated to various government departments in February’s Budget, by executive ministerial action under Section 16 of the Public Finance Management Act (PFMA).

An additional R2.4-billion is required as working capital, among other things, to pay its suppliers until the end of the financial year on 31 March 2018. SAA Chief Financial Officer Phumeza Nhantsi said the airline was “at an advanced stage” of getting this working capital from its shareholder – government.

Government is reluctant to go the executive action route yet again. And so talk has turned to a special appropriations Bill, which like the February Budget and October’s adjustments in the Medium-Term Budget Policy Statement (MTBPS) go through parliamentary processes to give the distribution from the national coffers Parliament’s approval.

This was done in 2015 to raise R23-billion for Eskom, when government sold its shares in Vodacom. But Eskom received that bailout only after the parliamentary process, including public hearings, committee deliberations and a vote in both the National Assembly and NCOP. The time crunch in the SAA matter comes as there is little if any time in the current parliamentary calendar, with its first sitting after the upcoming constituency recess only scheduled on 17 October – a week before the MTBPS on 25 October.

National Treasury Director-General Dondo Mogajane sidestepped journalists on the source of funding for the special appropriation legislation and the parliamentary processes. “We have to plead with Parliament to consider this on an urgent basis. If that’s not possible, we are looking at plan B.”

But a special appropriation Bill also requires a Cabinet decision as the finance minister tables such draft legislation. If there was no decision on where to find the money during Wednesday’s Cabinet meeting – traditionally there is a briefing, or at least a statement, on the executive’s meeting a day or two later – the next Cabinet meeting is only on 27 September, three days before SAA’s repayment deadline.

At Wednesday’s finance committee meeting it remained unclear where the billions needed for SAA would come from. Or where Cabinet would find it.

Buthelezi and Mogajane downplayed the possible sale of government’s 39.76% stake in Telkom, which generates around R800-million in dividend income annually. That option emerged last month when this detail from a Cabinet memorandum was leaked in the House by DA MP Alf Lees. It was later confirmed by the finance ministry that this was from a Cabinet memo that also asked Gigaba and other ministers to look at options. Both deputy minister and director-general cited an option of renegotiating a month’s delay of the due payments to lenders until end of October.

Government options in this prolonged low-growth economic environment are limited. Already departments are being asked to cut more costs to free up funds to be shifted to departmental delivery priorities.

In these circumstances, one attractive option for government could be the Public Investment Corporation (PIC). Chaired by Buthelezi as deputy finance minister, it holds among its R1.8-trillion assets government employees’ pensions and savings alongside Unemployment Insurance Fund (UIF) monies. Business Day last month reported that Gigaba said he “could not guarantee government will not attempt to make use of PIC funds to capitalise state-owned companies and other projects” when he addressed labour federation Cosatu’s Central Executive Committee (CEC).

If the PIC is indeed the option it could be indirect through its acquisition of government’s Telkom shares – or a direct funding of SAA’s bailout, styled as “recapitalisation” in government speak.

SAA is Gigaba’s test case, as it is for South Africa’s governance and socio-economic health. DM

Photo: Finance Minister Malusi Gigaba briefs Deputy President Cyril Ramaphosa ahead of his visit to the USA for the IMF World Bank Spring meeting and his meetings with the rating agencies at the Deputy President’s official residence OR Tambo House in Pretoria. South Africa. 18/04/2017. Siyabulela Duda