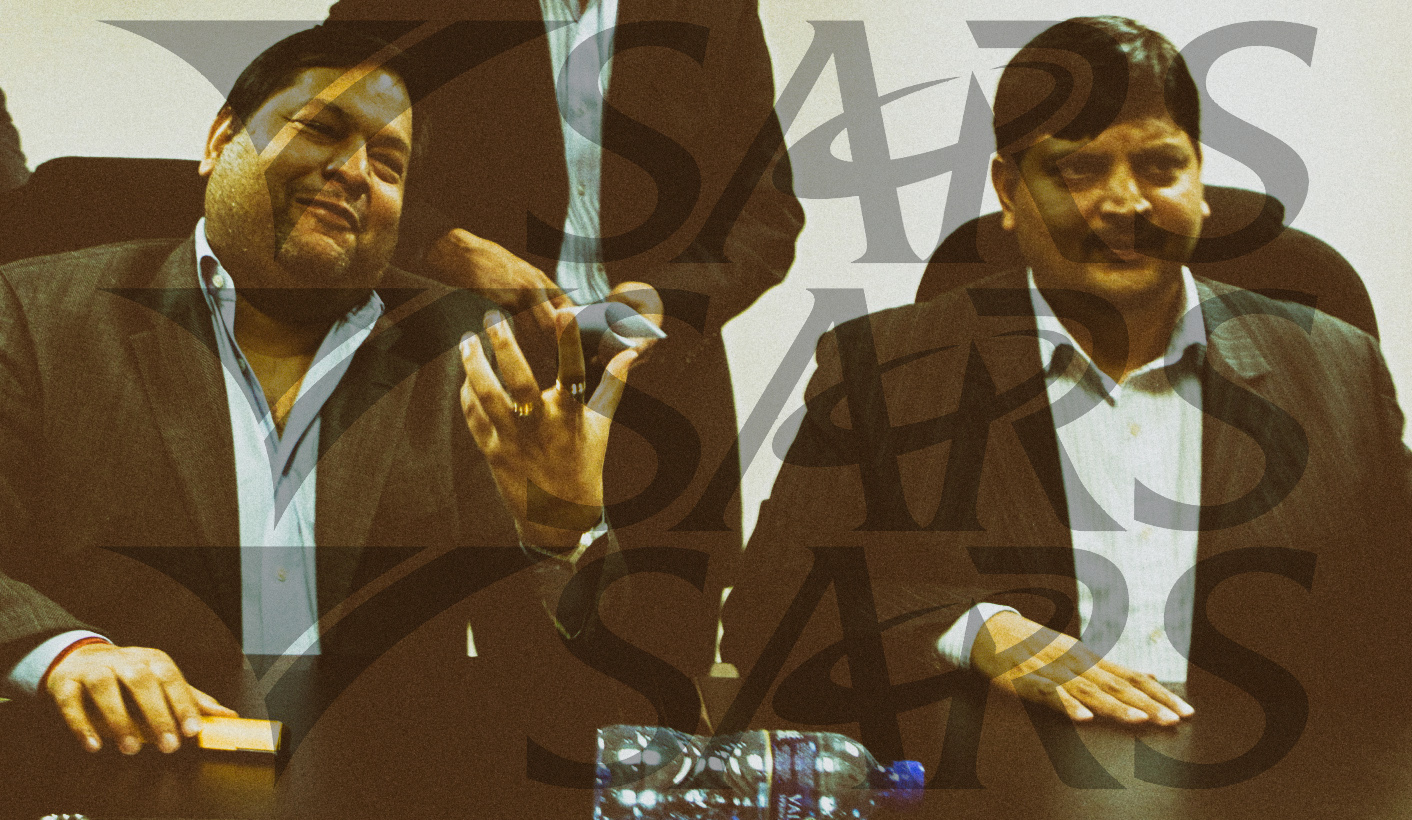 Last week, Scorpio & amaBhungane revealed just how little the Gupta brothers were paying in personal income tax – and questioned how their high-flying lifestyle did not raise red flags at SARS. We have since learnt that a specialized unit within SARS did attempt to investigate the Gupta family in what was described as a “massive preliminary investigation”. What shut it down appears to have been the fallout at the revenue service following the fake SARS “rogue unit” allegations in 2014, yet another significant casualty of the conveniently-timed black ops targeted at SARS. By REBECCA DAVIS for SCORPIO.

As early as 2000, the Gupta brothers were on the radar of the South African Revenue Service – implicated in a “massive hundred million [rand] VAT and import duty scam” at that time.

At the heart of the matter: dubious VAT claims, customs fraud, and exchange control contraventions amounting to a R120 million case. After a tip-off, both SARS and elite investigative unit the Scorpions began to look into the matter, which centered on the Guptas’ computer company Sahara.

The SARS investigation was ultimately combined with the investigative efforts of the Scorpions and the Reserve Bank – but nothing came of it.

As previously reported by the Times, a completed docket was handed to the NPA in 2003, but the Guptas were never prosecuted, for unknown reasons. The file has allegedly since been destroyed.

That was just the first of a series of attempts by SARS to investigate the Gupta brothers, Scorpio has now learnt from SARS insiders who cannot be named for fear of recrimination.

In 2010, the State Security Agency (SSA) came knocking. SSA agents asked SARS for help with investigating the Guptas, but after the agents who were spearheading the investigation left the SSA, matters ground to a halt.

SARS Custom Operations queried the Sahara Group’s imports and exports in 2011, 2012 and 2013, insiders say, but “nothing significant” came from this.

It was in 2012 – and more intensely in 2013 – that the main action began, with two SARS units giving the Guptas serious scrutiny under the ambit of the SARS Tax and Customs Enforcement Investigations (TCEI) Division under Gene Ravele and Johann van Loggerenberg.

Insiders describe the case as “very big” and “an open secret” within SARS, but the details of what exactly the TCEI was doing were known only to a few. The project was given a code name and involved only a select group of individuals because of the “perceived risks”.

The scale of the investigation was “massive”, insiders say, involving multiple companies, countries, individuals and transactions. It involved collaboration with other arms of government, such as the Reserve Bank, the police, the Hawks, intelligence agencies, Home Affairs and others. The focus was apparently on Sahara and the Oakbay group, together with their shareholders and directors and affiliated foreign companies and beneficiaries.

The insiders say that SARS head office managed the project, delegating tasks to officials in different regions and units.

The #GuptaLeaks emails have revealed that the Guptas received a tip-off of a possible investigation by SARS in November 2013, involving people close to President Jacob Zuma.

But SARS insiders have told Scorpio now that this intelligence received by the Guptas was flawed, and based on a rumour circulating around SARS head office at the time.

“We can tell you that the people who investigated the Guptas were professionals,” one commented. “Nobody would have had insight into their projects unless they allowed this.”

Off the back of the investigation, lifestyle audits were apparently planned for the Guptas in 2014 – which might have exposed their seemingly misleading personal income statements. But it was not to be.

The false narrative of a SARS “rogue unit” had found traction in the media by October 2014, with the relevant SARS units disbanded by 2015. With the exodus of top SARS officials in late 2014 and early 2015, the case “disappeared”, insiders say. The subsequent restructuring of SARS under current commissioner Tom Moyane brought most of the TCEI projects to a halt.

Moyane, as Daily Maverick has previously reported, is a longtime ally of President Jacob Zuma. Moyane has also yet to explain why he travelled to Dubai in December 2015 at the same time as all three Gupta brothers, President Zuma’s son Duduzane, and Eskom’s now suspended chief financial officer Anoj Singh – to name just a few of the group.

Contacted for comment by Scorpio, SARS spokesperson Sandile Memela denied that the restructuring of the revenue receiver had any impact on open investigative cases.

“The recent restructuring has strengthened SARS’ ability to deal with enforcement-related activities and did not affect any investigation that was undertaken,” Memela said. He could neither confirm nor deny the undertaking of SARS investigations into the Guptas, reiterating that SARS is bound by a confidentiality clause “not to divulge specific information and details on the affairs of taxpayers”.

According to one high-ranking official, however, this may not necessarily be the case.

The official suggested that a civil society organisation could accordingly launch an application to have the Guptas’ tax records revealed.

Last week, Scorpio & amaBhungane revealed that between 2011 and 2013, SARS accepted declarations from the three Gupta brothers to the effect that they earned R1 million or less each per year – on which they paid the relevant PAYE and not a cent more.

The official continued: “These forms reflect the profile of [taxpayers] who earn no dividends, no interest and have never had any share dealings. Nor do they reflect any interests, or income, from outside South Africa. In each of these cases the remarkable feature is that PAYE was all that was paid.” He added that it was impossible that no fringe benefits should have been recorded.

“There’s no doubt that [SARS commissioner Tom] Moyane is obligated, on the strength of this, to have a proper audit,” the official concluded. DM

Base photo: Ajay and Atul Gupta speak to the City Press from the New Age Newspaper’s offices in Midrand, Johannesburg, South Africa on 4 March 2011. (Photo by Gallo Images/City Press/Muntu Vilakazi)