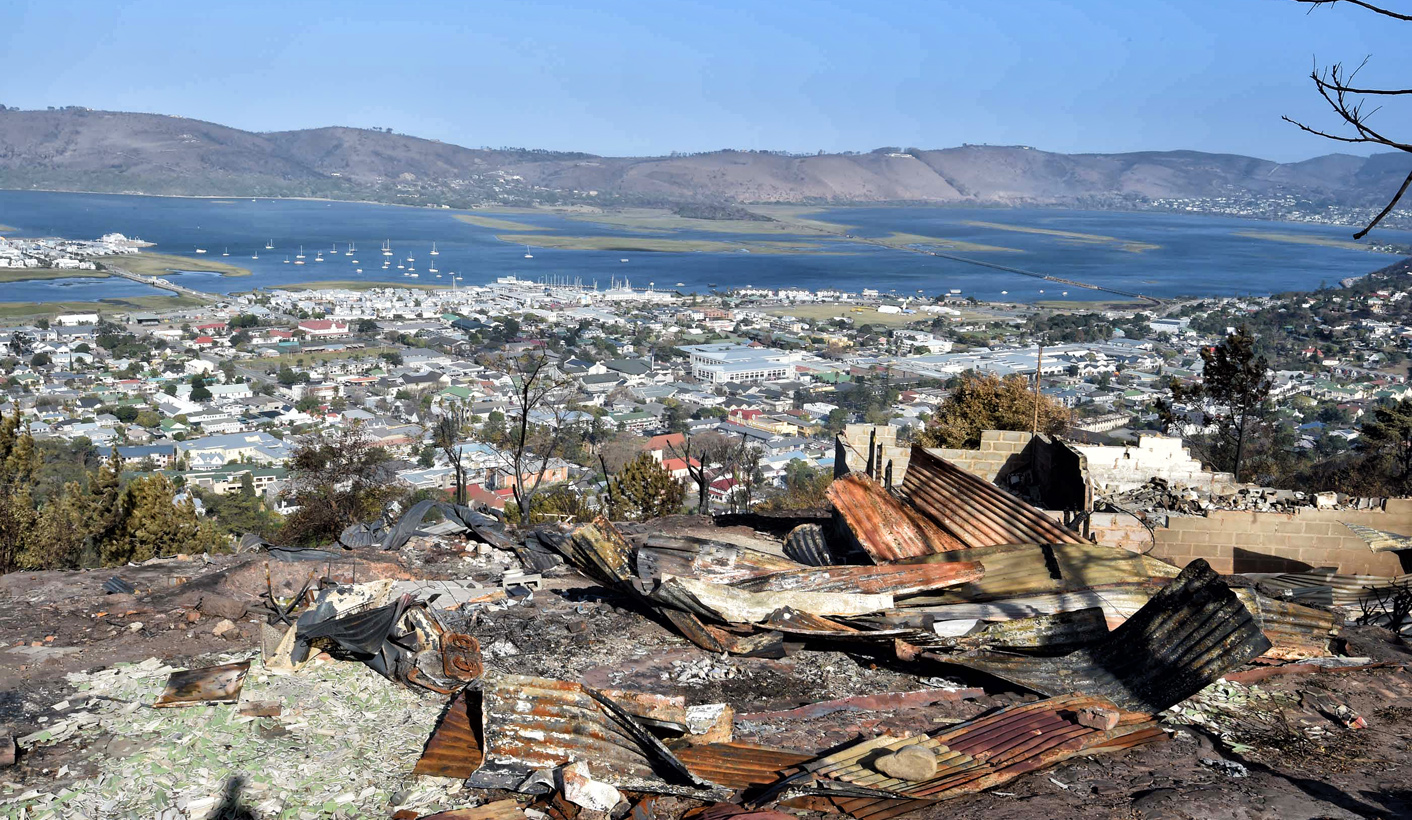 In recent years, a spate of destructive fires in the Western Cape have led to claims that arsonists are at work in what could be a politically motivated campaign. Tuesday brought bad news for conspiracy theorists: an independent investigation into the Knysna fires commissioned by AfriForum revealed no trace of arson. Forensic expert Dr David Klatzow’s conclusions do, however, put him at odds with the Knysna Fire Department. By REBECCA DAVIS.

“The first thought that goes through my mind is potential arson.”

When South Africa’s premier forensic expert Dr David Klatzow was commissioned by civil rights organisation AfriForum to investigate the causes of the Knysna fires, he says his initial suspicion was that arson would be involved.

Back in June, Klatzow said as much to journalists, suggesting that the existence of numerous fires happening simultaneously in the Knysna situation “raises a big flag” and pointed to “deliberate agency”.

But Klatzow has now produced a 276-page report which comprehensively rules out arson as the origin of the Garden Route fires.

Klatzow’s findings were announced at an AfriForum press conference on Tuesday, together with the screening of a documentary produced by the civil rights organisation titled “Knysna: From the Ashes”. In the documentary, Klatzow tells the camera that the possibility of “deliberate human agency as a political tool needed to be eliminated”.

In Klatzow’s book, that possibility has now been thoroughly debunked.

“My investigations showed that an accidental fire started at Dam se Bos, east of Knysna,” Klatzow’s report reads. He believes this fire may have been the result of children playing in the veld with matches, or a similar scenario. “This fire spread southwards to involve the Pezula Estate, and went on through the wooded areas to reach Plettenberg Bay. The ferocity of this set of fires was exacerbated by the prolonged drought and the development of gale-force winds (which rendered the fire almost unstoppable).”

An unrelated fire in western Knysna, meanwhile, had started as a result of a “well-documented lightning strike” some weeks earlier, which had caused the forest to smoulder steadily. On the morning of 7 June, this was “fanned to significant flaming combustion” by the wind.

“That fire finally jumped The Heads and met up with the other fire,” Klatzow explains in the documentary. These were the two main origins of what has come to be known in some quarters as the Great Knysna Fire.

Though dry and windy conditions were responsible for the rapid spread of the fire, Klatzow suggests that human action could still have prevented much of the disaster. In particular, he says that the fire which began in western Knysna as a result of lightning should have been addressed by authorities beforehand.

“The main lesson is to realise that given the climactic situation and smouldering combustion, that should have been attacked much earlier,” Klatzow told journalists on Tuesday. “If there were bureaucratic constraints, they need to be looked at. If that fire was attacked when it was a teenager, we would not be here having this discussion.”

Both Klatzow and AfriForum CEO Ernst Roets were at pains to clarify, however, that the investigation was limited to determining the origins of the fire rather than pointing fingers at how it was handled.

“A lot can be said about how it was dealt with by provincial government…but that was not the point of this investigation,” Roets said.

Nonetheless, Klatzow suggests that there are several basic messages to take away from the disaster. One is that “alien invaders” – non-indigenous trees – burn more fiercely than indigenous vegetation, which is one of the factors that helped the fire spread in this case.

He also suggests that attention needs to be paid to the vegetation surrounding high voltage transmission lines. Klatzow’s report states that in the course of his investigation, “the planting of tall trees which can be uprooted onto power lines was observed”. This is a major fire hazard.

Though Klatzow stressed that his investigation was “not an accusative endeavour”, he did point out that his findings differ from those of the Knysna Fire Department in several respects. Klatzow claims that the Knysna Fire Department’s report pinpointed the location of the fire’s origin incorrectly, and that the report “quoted local residents out of context in a way that changes what they said”.

Last week, Daily Maverick reported that the Knysna Fire Department’s findings focused on human involvement in the fire’s origins – albeit with a blaze probably started for warmth rather than any more sinister purpose. At that time, Chairperson of the Standing Committee on Local Government and DA Western Cape spokesperson on Local Government Masizole Mnqasela said police would throw the book at those involved.

“They need to track down these people and use all the available information so that we can exact the full might of the law,” Mnqasela told the Daily Maverick.

Klatzow and Afriforum are in agreement that a commission of inquiry should be set up by provincial government to stage a more in-depth look at the fires and their handling. AfriForum’s Roets said on Tuesday that the organisation has written to Western Cape Premier Helen Zille to ask for such a commission. Klatzow added his desire that the commission be chaired by “someone sensible”.

One thing is not in dispute: the devastating consequences of the fire for Knysna’s residents. AfriForum’s documentary includes heart-wrenching interviews with Knysna locals who lost everything in the flames, though some may disagree with some of their observations – for instance, that “all of a sudden people [in Knysna] are equal”, and “there is no class difference between poor and rich any more”.

AfriForum played a role in channeling emergency money and other resources to those in need after the fires. Roets cautioned, however: “We don’t want to create the impression that AfriForum was the only organisation to assist.”

AfriForum’s decision to independently commission a report into the fires is worthy of noting, however. It suggests a lack of faith in the government’s ability to carry out such tasks, which fits into a wider picture of AfriForum’s recent activities and campaigns. As Daily Maverick suggested in May, finding ways to act parallel to the state seems increasingly to be AfriForum’s modus operandi.

The group’s approach to the Knysna fire suggests that it has the ability to do so with growing confidence and professionalism. You can expect AfriForum to be an ever more vocal, high-profile thorn in the government’s side. DM

Photo: President Jacob Zuma accompanied by Ministers, Deputy Ministers and Western Cape Premier visited communities of Wit Lokasie and Knysna Heights in the Garden Route that have been adversely affected by the recent fires that caused total devastation, destruction of property, displacement of people and loss of life. (Photo: GCIS)